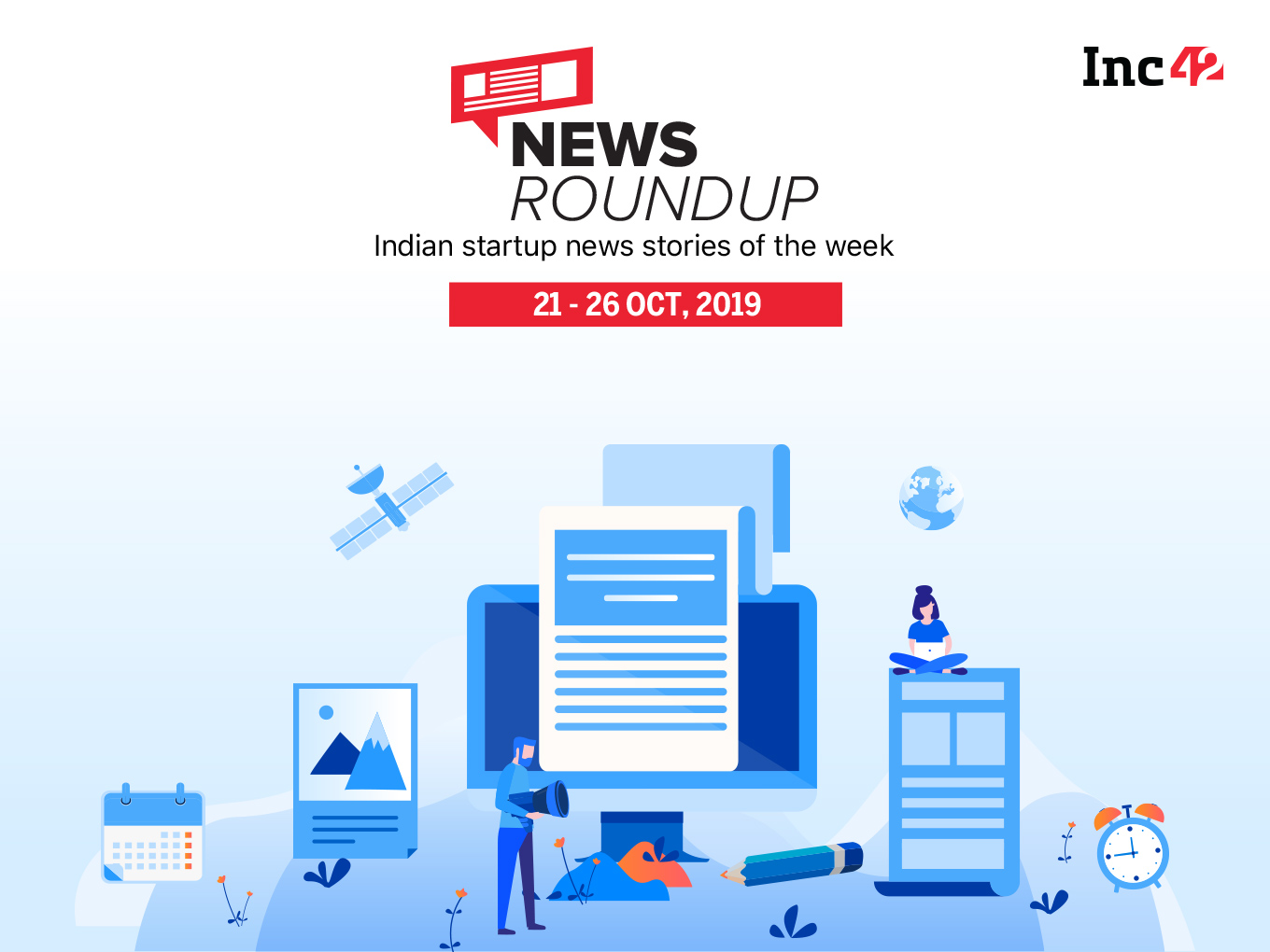 In one of the most important development for the Indian startup ecosystem this week, India jumped 14 spots in the World Bank’s Ease of Doing Business 2020 rankings report released on Thursday (October 24). From the 77th rank last year, it jumped 14 places to the 63rd position among 190 countries, thereby becoming one of the world’s top 10 most improved countries for the third consecutive time. Only Burundi, Colombia, Egypt, and Georgia have previously managed such a hat-trick, but India’s reform efforts are particularly commendable given the size of the economy, said the World Bank.

To facilitate knowledge-sharing and holistic growth in the Indian tech industry for big corporations and startups, the National Cyber Security Coordinator’s office in partnership with Data Security Council of India (DSCI), launched a digital portal TechSagar on October 21. TechSagar is meant to act as a repository of over 4K businesses and research entities focusing on technology— IT industry, startups, academia and individual researchers.

At the same time, Prime Minister Narendra Modi advised against the demonisation of AI and similar technology, while saying that artificial intelligence has the potential to transform people’s lives. He also assured listeners that AI will not replace all human jobs in the future. Also, the government recently appointed new committee to resolve NITI, MeitY’s conflict over AI mission.

The company which is now inching closer to reach the unicorn club has planned to shut down its other non-core businesses, including wedding services and photography. However, UrbanClap has planned to scale up its operations in these two categories. The company is going to manage and monitor the quality of the service closely on its platform.

What Ola/Uber Are Upto?

Ola has been rapidly expanding its verticals into everything complementing its core business. The latest product addition came with the launch of Ola Drive, a self-drive car rental service. To further accelerate their growth, the company is now reportedly sending senior Ola employees to its new businesses.

At the same time, rival Uber announced the launch of Uber for Public Transport for the Indian market, starting with Delhi. The company has partnered with Delhi Metro Rail Corporation (DMRC) to enable the service across its 200 Delhi Metro stations.

The ministry of corporate affairs (MCA) on October 22, issued a notification stating that the board of directors will now be liable to provide the details of the independent directors (hired during the year) integrity, expertise and experience to the shareholders. An independent director is one of the members of the board of directors, who do not have any stake in the company.

A Swiggy customer from Hyderabad refused to accept an order after knowing that the delivery guy was a Muslim. This news comes just a few months after Zomato’s food and religion controversy made the headlines.  On October 21, a Swiggy user placed an order from the app and had specified that the food should be “very less spicy. And, please select Hindu delivery person. All ratings will be based on this.” Swiggy told Inc42, every order is automatically assigned to delivery executives based on their location, availability, etc. and not based on individual preferences. As an organization, we do not discriminate between our partners and customers on any grounds.

Amid the rising controversies surrounding the murder of Hindu Samaj Party leader Kamlesh Tiwari, Zomato has clarified that Moinuddin Pathan, who is allegedly involved in the murder, has never been an employee at the company. However, the company has accepted that he was working as a freelance delivery partner with Zomato. At the same time, Zomato says it is not seeing dwindling membership numbers for the controversial Gold subscription service. Contrary to what the NRAI claims, the number of establishments registered on Gold has increased about 6% since August, to 6,450 restaurants across 41 cities as of now.

Further, with a vision to reduce the wastage of used cooking oil in the country, tech-food unicorn Zomato has inked a partnership with the biodiesel manufacturer, BioD Energy. Also, Zomato claimed that response the company received from Tier 3  to Tier 4 cities has been a pleasant surprise for Zomato’s growth. Tier 3 and 4 cities now contribute to 35% of the monthly order volume.

Several OYO hotel partners have reportedly raised issues ranging from poor software, loss of revenue as well as criminal activities within rooms that are managed by OYO. The report states that while OYO has acknowledged some of the issues, the company has refused to comment on many of the allegations made by the hotel partners.

Global policy head Chris Lehane said that company has been working with the Indian government in India to promote the local culture and traditions through its offerings to travellers. Lehane added that the company has given special attention to some of the suggestions made by Prime Minister Narendra Modi during his interactions with Airbnb founder Brian Chesky.

Pune-based Startup Shoptimize has announced two new business opportunities in Southeast Asia after the company has started working with local partners in South Korea and Singapore. Shoptimize said that it took the decision as it wanted to function closely with the companies with which it has been working in India.

At present, the draft personal data protection law proposes that companies have to store all payments related information within India, making overseas companies unhappy since it increases the cost of operation in India. However, multinational financial services corporation, Visa claims that they are ready to adhere to the data localisation norms.

Coconics To Launch Its First Laptop Range By January 2020

Kerala-based original equipment manufacturer (OEM) Coconics is all set to release its first range of laptops by January 2020. The product is being manufactured in collaboration with a Kerala based enterprise Keltron in Thiruvananthapuram, the state’s chief minister Pinarayi Vijayan.

With more than 1,200 video creators in the country crossing the million-subscriber base, YouTube is experiencing a “staggering growth” in vernacular content consumption, said director of content partnerships of YouTube India, Satya Raghavan. The video-sharing website has over 265 million users per month in India currently and 60 percent of users come from outside the metro cities.

Under this partnership, Throttle Aerospace Systems will provide the drones and run it in the testing phase, however, operations will be handed over to SpiceXpress once final regulatory approvals are received.

Stay tuned for the next week edition of News Roundup: Indian Startup Stories Of The Week!