Reliance launched a pilot of its ecommerce platform 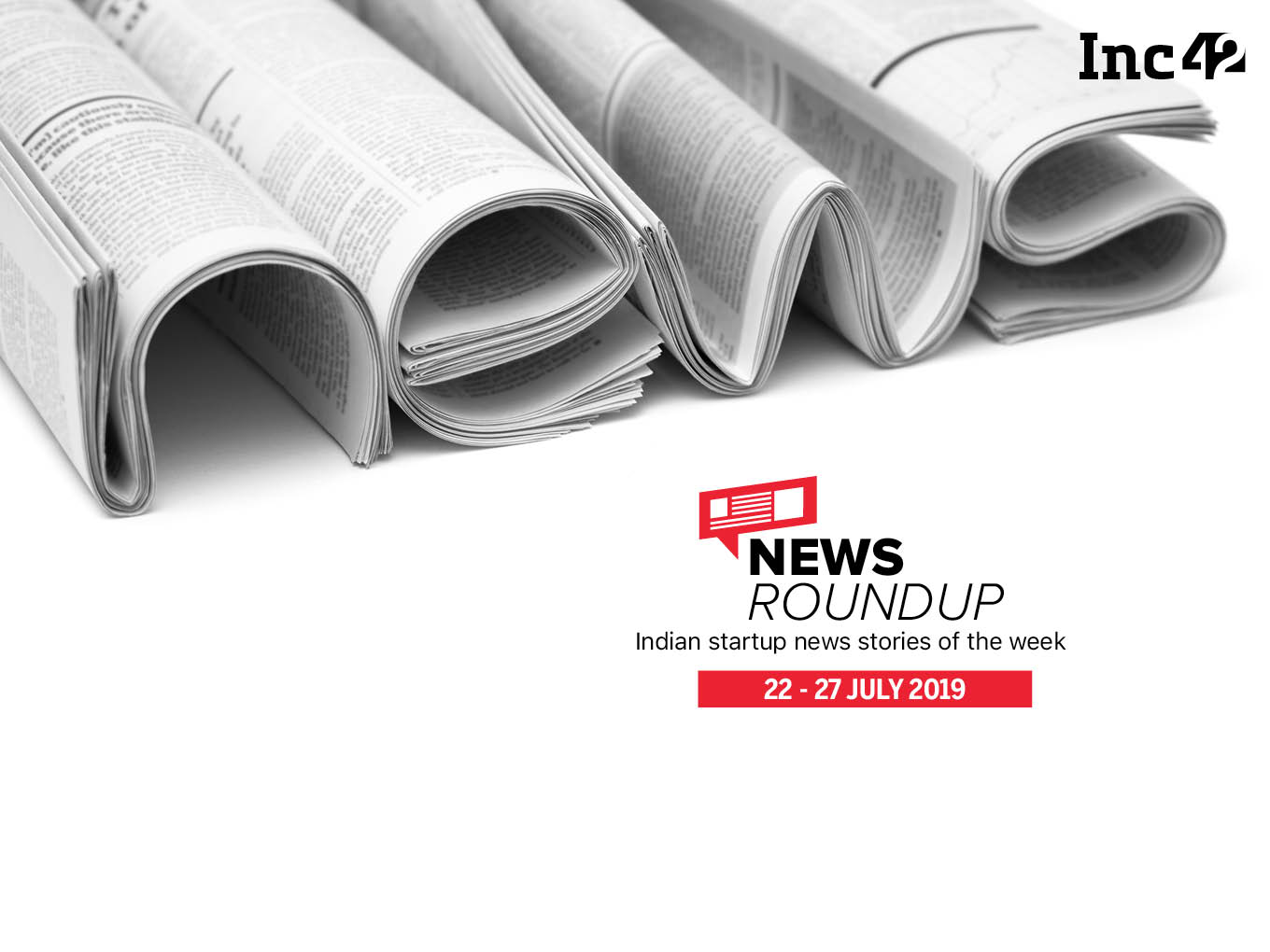 This week in the Indian startup ecosystem, Nandan Nilekani introduced a new model which could change the game for the fintech ecosystem in India in the form of account aggregator.

Nilekani debuted Sahamati, a collective of account aggregator focussed on fintech data and addressing the friction in accessing this data. The Sahamati framework addresses pain points and provides a digital platform for easy sharing and consumption of data between its partner entities, with user consent.

Earlier in the week, reports surfaced that the government is on a mission to ensure that only genuine startups are benefiting from the relaxation of angel tax rules, and if any startup fails in complying with the rules, it could be risking a severe angel tax penalty. The most recent addition to the rules includes a penalty of 200% on startups that don’t comply with angel tax requirements.

The government has introduced an amendment to the Finance Bill passed by the Lok Sabha on July 18. The change includes a penalty of 200% on startups for not complying with the government’s conditions while availing angel tax exemption under Section 56 (2) (vii).

The Global Innovation Index 2019 ranks 129 economies based on 80 indicators, from traditional measurements like research and development investments and international patent and trademark applications to newer indicators including mobile-phone app creation and high-tech exports.

Chennai-based Software-as-a-Service unicorn Freshworks is reportedly working towards an initial public offering (IPO) as early as 2021. The listing is expected to be on New York-headquartered stock exchange, NASDAQ.

The week was filled with interesting developments across WhatsApp, ecommerce and much more. Here’s a look at the important Indian startup news stories of the week.

Japanese technology-focused mega-corpus, SoftBank Vision Fund, is reportedly looking to hire a dozen executives in its India operations team over the next few months, according to a media report.  Further, another media report has noted that the SoftBank Vision Fund is not looking for an early exit from Indian startups and is willing to wait for the right time for startups to go public. Managing partner of SoftBank Investment Advisers, Munish Varma reportedly said that, “while the operating team will focus on helping our portfolio companies grow globally, they will also be actively investing. The investing and operating teams will work very closely.”

Reliance Retail has started the pilot phase of its new commerce initiative, according to the company’s latest shareholder presentation. The differentiated business model will provide a technology platform for millions of small merchants across India to strengthen and grow their business, the company added.

In another development, Reliance Jio, emphasised on the requirement and a framework for data localisation to ensure cyberattacks are prevented. Jio has asked its corporates to take appropriate measures to protect data.

The Federation of Hotels and Restaurant Association of India (FHRAI) has reportedly filed a complaint with the Competition Commission of India (CCI) against Gurugram-based hospitality unicorn, OYO. The hotel body has alleged that three months after OYO promised its partners an 18% interest on delayed payments and launched complaint redressal solutions, the issues continue to be unresolved.

Following the ban on the sale of ecigarettes’ in at least 12 Indian states, an ecigarette lobby group called Trade Representatives of ENDS (TRENDS) has been asking the various government bodies for a meeting to share their recommendations on a proposed country-wide ban on ecigarettes also known as Electronic Nicotine Delivery Systems (ENDS). However, the group has not received any response from the state or central government bodies,

Innoviti Payment Solutions had filed an infringement suit against Pine Labs Pvt Ltd over sale of payment products that infringe on Innoviti’s patent on the payments processing technology that enables UPI payments at retail POS terminals. Pine Labs Private Limited has filed its appearance before the District Court in Bengaluru refuting allegation of patent infringement IN309274 and to confirm its non-infringing status in the matter.  following its petition before the District Court on July 22, 2019, the District court while moving the matter to Karnataka High Court also modified its earlier order to remove references to Plutus Smart or to dynamic QR codes.

The concerns of Indian government revolves around the fact that these Chinese ecommerce players such as Shein, Club Factory have been importing goods to India under the garb of gifts and thus, evading the customs duty. Free samples as well as gifts from overseas persons up to the value of INR 5,000 can be received duty-free in India via couriers. However, there is no limit on the number of gifts an individual can receive.

Aditya Birla Group’s payments bank, also known as Aditya Birla Idea Payments Bank has announced the shutdown of its operations on July 21, 2019.  “We request you to transfer the balance through online/mobile banking/nearest banking point. We will be restricting any further credits (add money) to your account from July 26, 2019,” the company said in a text message to its account holders. Interestingly, the twitter thread has also noted that Vodafone M-Pesa has been shut down too, and July 15 was the last working day for the M-Pesa team.

TikTok and Helo’s parent company, ByteDance has announced plans to setup data centres in India. The company plans to setup these centres in the next six to 18 months. According to a company spokesperson, ByteDance is planning to make an initial investment of $100 Mn for setting up the infrastructure for these data storage centres. However, the company expects the investment size to go up depending on the needs and the final roadmap.

The High Court passed the order after the state transport authority and the police department questioned the validity of Bengaluru-based bike taxi services provider Rapido operating its service in Tamil Nadu. The Tamil Nadu government had objected against the service of Rapido in the state as it did not come under the purview of the Motor Vehicles Act.

Digital payments unicorn Paytm has announced its partnership with a non-banking financial company (NBFC) Clix Finance to enable digital loans for both its customers and merchants. According to a company statement, Paytm will avail these loans to Paytm customers and merchants in the mode of deferred payment or postpaid and merchant lines facilities.

Infinity dining will allow users to avail unlimited servings of the whole menu at a fixed per person cost depending on the restaurant, according to a company blog. Only eligibility criteria for users to qualify for infinity dining is a Zomato Gold membership, which is priced at INR 599 for a three month subscription.

The Snapdeal founders have been booked under Section 420 of the Indian Penal Code. Indramohan Singh Honey, who was the Congress spokesperson during the recent Lok Sabha elections, had ordered a Woodland belt and wallet on July 17. He said he suspected the authenticity of the product and took it to a Woodland showroom for verification. The showroom confirmed that the product was a duplicate.

It will be venturing into the consumer lending business. The company has formed a new entity — CARS24 Financial Services — for the same. The company will be launching its services in Delhi, Mumbai and Bengaluru in August 2019 and will scale up to the other cities gradually. With the NBFC license, the company aims to provide seamless and instant access to credit.

The US Department of Justice has announced broad antitrust review into whether major tech companies such as Google, Apple, Amazon, Facebook and others are using their market position to thwart competition through monopolistic practices. The DOJ’s antitrust division said this week that it would scrutinise tech platforms after claims from many experts that the major companies have grown too powerful, owing to near-unlimited resources too big and too powerful.

OPPO had paid INR 1,079 Czasq      `r for the right to be on the jersey in 2017 but now finds the price too high and unsustainable. It’s allocating the rights to BYJU’S according to a Times Of India Report, and work on the front is already in progress. OPPO would also pay BYJU’S, a small fee to cover for the expenses of being the sponsor, while the Board for Control of Cricket in India (BCCI) would continue to receive the same amount that OPPO had bid.  BYJU’S would hold the rights for the sponsorship till March 2022.

Netflix has launched an INR 199 plan for the country. The plan will go live later this evening. In its shareholder letter last week, the company had said that it will roll-out a low price mobile-only subscription plan for Indian market. Since March, the company had been beta-testing an INR 250 plan for mobile-only users, which is half the price of company’s existing basic monthly plan of INR 500.

IKEA Reverses Its Omni-Channel Strategy For Expansion In Mumbai

For its expansion in Mumbai — its second store after Hyderabad in India — the company has reversed its offline-then-online plan to online-then-offline. IKEA is starting with online launch first. This would be followed with smaller outlets, pick up centers and customer service stations across the city. These would be around 50K-150K sqft stores. The multi-channel and multi-format model is expected to help the company reach out to a younger customer base.

In December 2018, the Ministry of Civil Aviation announced a DigiYatra platform, which will enable paperless travel and avoid identity checks at various checkpoints in the airport, thanks to the use of facial recognition. The Vistara flight UK864 from Bengaluru to Mumbai was the first to experiment with the image identification technology after Hyderabad trials. It will be effective to all Vistara flights departing from the airport by October 2019, as part of Phase 1 of the Digi Yatra project.

India Has Potential For Smartphone Exports Worth $ 200 Bn: IAMAI

India is all set to become a $80 Bn market for smartphones by 2025. The global market during the same time is estimated to grow to around $650 Bn, thus opening up a huge opportunity for India to capture a large global share of the market and also become the manufacturing destination of choice for the world. This is one of the finding of a report titled ‘Make in India 2.0 (Revisiting Mobile Manufacturing), published by Internet and Mobile Association of India (IAMAI).