OYO has asked its employees to take 25% pay cuts 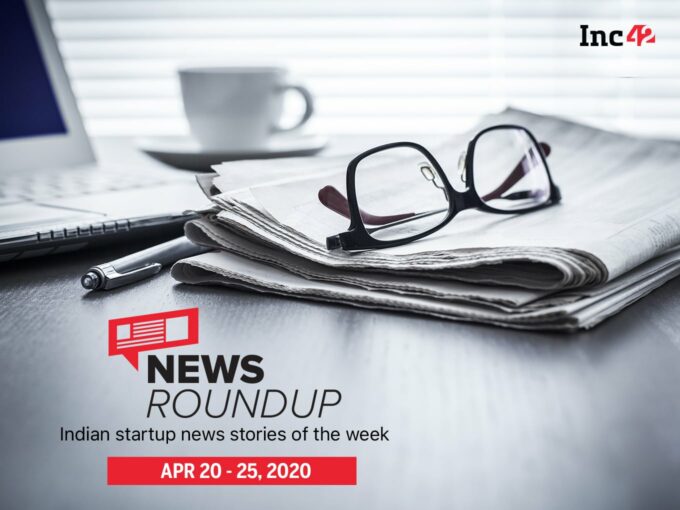 Amid pandemic, one of the biggest highlights of the week came with Facebook’s $5.7 Bn investment in Reliance Jio. Soon enough the deal got market attention, with experts questioning whether the deal will be approved by the Competition Commission of India (CCI). The two companies are known as “data elephants” in the industry and have had to deal with and collect a lot of data of Indian internet users. Many fear the deal will provide an undue advantage to these companies over their competitors.

Ajit Mohan, vice president and MD at Facebook India clarified that data sharing wasn’t part of the deal struck between the two companies. He further said that both companies are very conscious of consumer data and would ensure that it is respected.

In an attempt to curb opportunistic takeovers or acquisitions of Indian companies and tech startups by corporations outside India due to the current Covid-19 pandemic, particularly the neighbouring countries — China, Pakistan, Nepal, Bangladesh and Myanmar —  the finance ministry has notified changes in foreign direct investment (FDI) rules, under the Foreign Exchange Management Act, 1999 (FEMA).

The Department for Promotion of Industry and Internal Trade (DPIIT) said that the new rules will be applicable to ‘the transfer of ownership of any existing or future FDI in Indian companies,’ directly or indirectly. This development comes after China sought its revision.

The Indian government is planning to increase the purview of its social security schemes to the workers employed in the gig economy and unorganised sectors. The schemes include various benefits such as a pension, provident fund, contributions, health insurance, unemployment wages, etc.

DPIIT has asked ecommerce companies to submit a list of limited items that can be considered as essentials. Once approved by the ministry of home affairs (MHA), ecommerce companies will be able to start delivering work-from-home related essentials like internet routers, chargers, laptops, tablets and stationeries among others.

After launching the contact tracking app Aarogya Setu, the Indian government in collaboration with wearable tech startups is looking to launch a wristband which tracks Covid-19 patients. The government’s technology procurement body Broadcast Engineering Consultants India Limited (BECIL) will be pitching the design for the wearable device to AIIMS and other government hospitals this week. OYO Cuts 25% Salary For All Employees

After the announcement of furloughs, OYO Hotels and Homes has asked its employees to accept a 25% pay cut as it looks to overcome the impact on revenue from the Covid-19 pandemic. OYO’s India and South Asia CEO Rohit Kapoor said that the deductions will be effective from April-July 2020 payroll. Further, he clarified that all other benefits will remain unchanged and it will be ensured that no employee gets less than INR 5 Lakh per annum after deductions, claiming that a ‘large percentage’ of employees at a lower pay scale will see no impact.

As a measure to keep individuals, as well as the authorities, informed about Covid-19 infected people, Zomato has mandated Aarogya Setu for its delivery partners. Citing Ebola, Zomato’s founder Deepinder Goyal, in a series of tweets also said that contact tracking can go a long way in containing the spread of the virus. Further, he said that in the past the contact tracing has proven helpful to curb contagion.

After the initial struggles with the lockdown and manpower crunch, BigBasket is back on track, mainly because of tie-ups, which sorted issues related to the last-mile delivery of groceries and staples. BigBasket’s cofounder and CEO Hari Menon, in a series of tweets, explained that the company is usually prepared for such demands three months ahead.

Digital payments giant Paytm has cut around 15-20% of its cost in the last two months to curb expenditure amid the pandemic. The company’s revenue has taken a hit due to the decline in transactions from movies and travel booking. However, revenues from utility payments such as mobile recharge, electricity bills have spiked.

Paytm Payments Bank also announced that it has crossed over INR 1K Cr in deposits by over 57 Mn account holders. The payments bank confirmed that its customers can receive the benefits of over 400 government subsidies, including LPG gas, Mahatma Gandhi National Rural Employment Guarantee Act (MNREGA) payments, old age pension and government-sponsored scholarships into the beneficiary bank account through direct benefit transfer.

After the permission of a beta roll-out retracted, Facebook-owned WhatsApp continued to struggle to launch its payments services in India. It has now assured the National Payments Corporation of India (NPCI) that its payments platform will be compliant with local data protection and storage regulations by May 2020.

Alibaba Offers $30 Mn Worth Credits To Digitise SMEs In India

Chinese tech major Alibaba has launched a Global SME Enablement programme to provide cloud technology to digitise small and medium enterprises (SMEs), where it will be offering $30 Mn worth credit of cloud assets to new and existing clients around the world, including India. Alex Li, general manager at Alibaba Cloud South Asia said that this initiative will give a boost to India by increasing the contribution from its SMEs to its GDP by 50%.

Ecommerce giant Amazon has announced its plans to invest INR 10 Cr ($1.3 Mn) in its ‘Local Shops on Amazon,’ where it plans to onboard more sellers online. The company said that it will be spending the fund to train any motivated retailers or shopkeepers who are ready to leap forward in this exciting journey of digitising their businesses.

DPIIT in partnership with the Confederation of All India traders is looking for a potential way to digitise the departmental retail stores and their supply chain. Startup India is inviting startups and entrepreneurs to present their ideas for messaging platforms, logistics solutions, vernacular content platforms, digital payments gateways and more. The partnership aims to digitise around 7 Cr retailers, manufacturers, distributors and wholesalers.

Like several other startups leveraging the hot sector of grocery, the social ecommerce startups such as Meesho, Shop101, Mall91, Shopmatic, DealShare etc have also ventured into this space to gain customer interest and keep some revenue coming in.

However, in stark contrast to the workforce additions in BigBasket, Grofers and others, social ecommerce players have been under scrutiny after several of the top players have had to let go of employees and announce company-wide pay cuts.

The social media giant Facebook has officially launched its Messenger Kids app to over 70 countries, including India. It is a video chat and messaging app that allows children to connect with family and friends in a parent-controlled environment. The company also launched Facebook Gaming, globally. The social media giant is looking to accelerate further by including new tournament features.

The threat intelligence platform Cyble exposed the sale of over 267 Mn Facebook users which was sold for INR 42K. Further, it revealed that personal data including email addresses, names, Facebook IDs, date of birth and phone numbers were available on the database. The researchers claimed that it had verified the data by purchasing it only for reviewing purposes.

As video conferencing platform Zoom faces security glitches as highlighted by the home ministry and businesses, Google has snooped in on the opportunity and has now allowed its GSuite users to directly take video conferencing calls from Gmail on video conferencing tool ‘Meet.’ Apart from offering easy access to video calls, Meet will be offering a layout displaying up to 16 call participants at once, which is more or less similar to Zoom.

Google Shopping Lets Merchants To List Their Products For Free

Google recently announced that it will be allowing merchants to sell on Google Shopping platform for free. However, to promote products through ads, the sellers will have to pay. This feature will be made available in the US by the end of April 2020, and other markets by the end of this year.