China’s Snack Video gained the most traction post the Tiktok ban with a total of 56.4 Mn downloads despite the prevailing anti-China sentiments in India

With all the buzz around short video app alternatives post the Tiktok ban, the focus of consumers, influencers, and brands quickly turned to the Indian TikTok clones. The big hope was that the likes of Mitron, Roposo, Chingari, Trell, Bolo Indya, and others would fill the void left in the wake of the ban.

Many of these apps had already been present in India before the TikTok ban and suddenly saw a big jump in adoption. And it’s clear that some of them have had their fortunes turned around due to the ban, and have only grown in recent months because of the ban and the opportunity to cash in on the gap.

A Brief History Of Short Video Apps In India

Before we look at how the TikTok ban influenced some of India’s short video apps, let’s take a quick journey through its history. Short video apps have been around in India for over five years, and have been gaining traction since 2015. The first such Indian app was Sharechat, which stepped into the market in October 2015. It initially started as a vernacular content sharing platform but later moved to user-generated content with a big focus on videos in April 2016. It allowed users to discover, share, and create content in 14 Indian vernacular languages like Kannada, Tamil, Bengali, etc.

Just when Sharechat has started growing in the market, Bytedance, one of the leading Chinese technology firms launched TikTok and Helo in 2016.

TikTok’s popularity spread like a wildfire in India and the app got 277.6 Mn downloads from India out of 614 Mn total downloads worldwide in 2019, according to Sensor Tower. It was the third-most downloaded non-gaming app of the year, behind perennial leaders WhatsApp and Facebook Messenger.

Inspired by the success of TikTok, a host of me-too apps sprouted up. The likes of Trell, Bolo Indya and Chingari had already entered the market, before they became household names in the past six months. However, TikTok was such a huge force in the market, that these apps barely got any traction.

Despite being surrounded by controversies and also being removed from Google Play Store and Apple App Store for a short period of 20 days in April 2019, Tiktok witnessed crazy growth in India. Users in India spent a staggering 5.5 Bn-plus hours on Tiktok in 2019, a startling 6x increase from the 900 Mn hours in 2018. In terms of rapid growth and scale, few products in tech history have seen such a massive uptick in engagement.

Explore More Such Insights With Inc42 Plus

Then Came The Ban: Rise Of TikTok Alternatives

Riding on this massive surge in popularity and usage, TikTok also became a brand favorite with massive amounts of money being spent on the app. It created a new wave of influencers in India.

But on June 29, 2020, the TikTok machine came to a grinding halt. Named among 59 Chinese apps that were banned in India, TikTok went from hero to zero overnight. Many called it a casualty of the geopolitical war between India and China but it opened up the door for the Indian alternatives that were so far overshadowed by TikTok.

Banking on the ‘Made In India’ and ‘Atmanirbhar Bharat’ wave, ‘multilingual’ short video apps such as Chingari, Roposo, Mitron, Bolo Indya, MX Takatak, Gaana Shots, Zee HiPi, Trell, and several others — barely heard of before the ban — reported a steep rise in users and engagement.

Trell, which has been around since 2016 but was little known till July, witnessed more than 12 Mn downloads in the five days after the ban. Similarly, Mitron reported that its daily traffic had jumped 11-fold after the ban on TikTok. Even erstwhile laggards like Roposo, which stood on the sidelines when TikTok was ruling the market, have come to the fore. According to Sensor Tower estimates, Roposo, Zili, and Dubsmash were the biggest gainers in India since the ban on TikTok, with the three apps collectively seeing 21.8 Mn downloads in the three weeks since the ban, a growth of 155% when compared to three weeks before the ban.

The feeding frenzy also attracted many players into the market such as Sharechat, an Indian social media homegrown brand launched Moj, Gaana, a music streaming platform, debuted Hotshots, MX Player with MX TakaTak, and Dailyhunt launched Josh. Indie apps such as Vee Tok, Veer, TipTop and Punch form up the tail of this market, with each app eyeing a share of the over 200 Mn Indians that were forced to migrate from TikTok.Even international players such as Snack Video and Triller saw huge growth in India, with Triller also getting Reliance Jio’s backing through a JioSaavn collaboration.

The short video boom attracted investors too. Just two days after the ban on Tiktok, Mitron which was launched in April 2020, claimed 17 Mn downloads and also raised seed funding from 3one4 Capital and a LetsVenture syndicate led by Arun Tadanki.

Chingari, which had been in the market since 2018, gained traction too. It recorded more than 23 Mn downloads after June 29. It raised $1 Mn seed funding from LogX Ventures, AngelList’s Utsav Somani, NowFloats’ Jasminder Singh Gulati, AL Trust (Vistra ITCL), Village Global a month after the ban.

Although the rise in these short video apps have grabbed the attention of investors’ into the space, all these apps are similar to each other in many ways and thus, it becomes difficult for these apps to sustain in the market without huge cash burnout in the initial stages.

Siddarth Pai, founding partner of Mitron backer 3one4 Capital, agreed that attempting to become a general platform from day one with no differentiation requires large amounts of capital, unsustainable business practices like buying users. This entails high cashburn and a threat of being usurped by those with larger pockets or even the banned apps if the ban is lifted.

So now nearly three months after the ban, the question is which of the various Indian alternatives to TikTok are best poised to win the short video race?

How India’s Short Video Apps Stack Up To Each Other?

Inc42 partnered with AppTweak to understand how the various apps have performed in the past few months in terms of downloads, visibility, app power, competition map and so on. Here are a few takeaways:

Despite the ban on Chinese apps and rising anti-Chinese sentiments in India, the void left by TikTok has been filled by another Chinese short video app. Snack Video, developed by Kuaishou Technology and headquartered in Beijing, gained the most traction post the Tiktok ban. Launched in India in August 2019, Snack led the short video app market between June 29 and September 9 with estimated downloads of 56.4 Mn.

MX TakaTak, which launched only in July this year, was the second most downloaded app with around 48.5 Mn estimated downloads in the same period. Dailyhunt’s Josh with 40 Mn, Sharechat’s Moj with 38.1 Mn, and InMobi-acquired Roposo with 26.5 Mn rounded off the top five in terms of downloads. 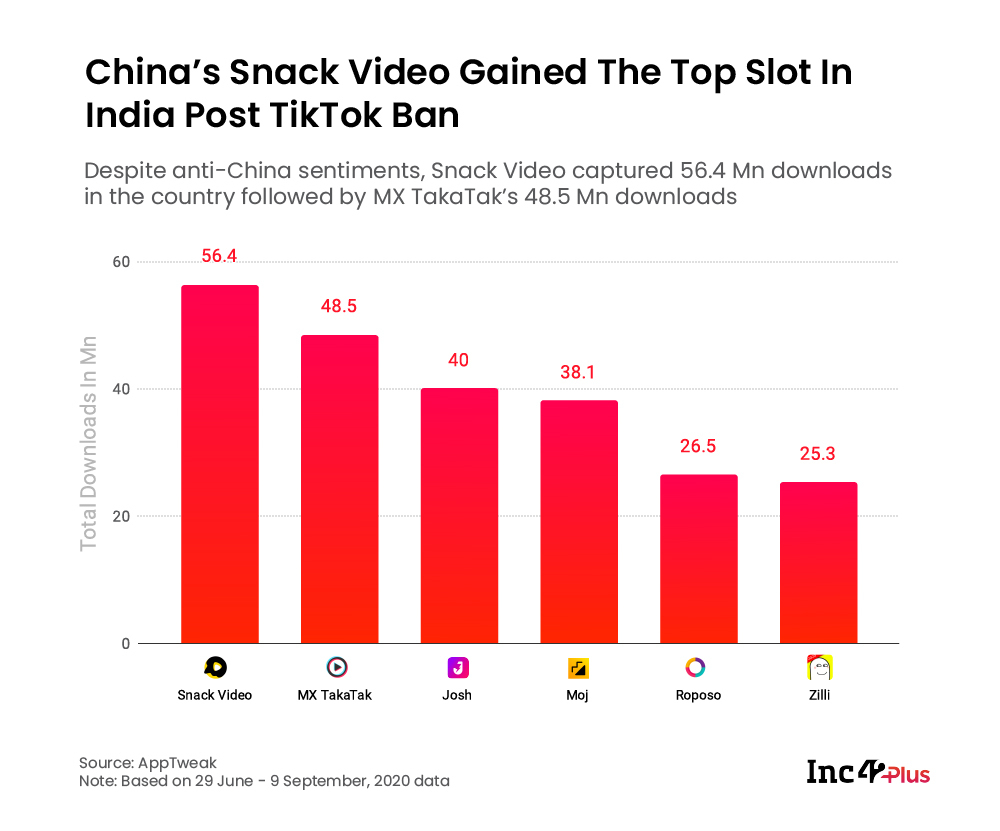 Among the apps considered, China’s Snack Video took the top slot with the highest average ranking across the eight keywords and also the highest number of installs through these keywords at 7,500 downloads per month.

Trell had the highest average ranking among the Indian apps and ranked for seven out of the eight keywords, getting on an average 1,088 installs per month from those keywords. Other Indian short video apps —  Roposo and Chingari — ranked for all eight keywords but had fewer downloads through these keywords with an of average 597 and 380 installs per month  respectively. 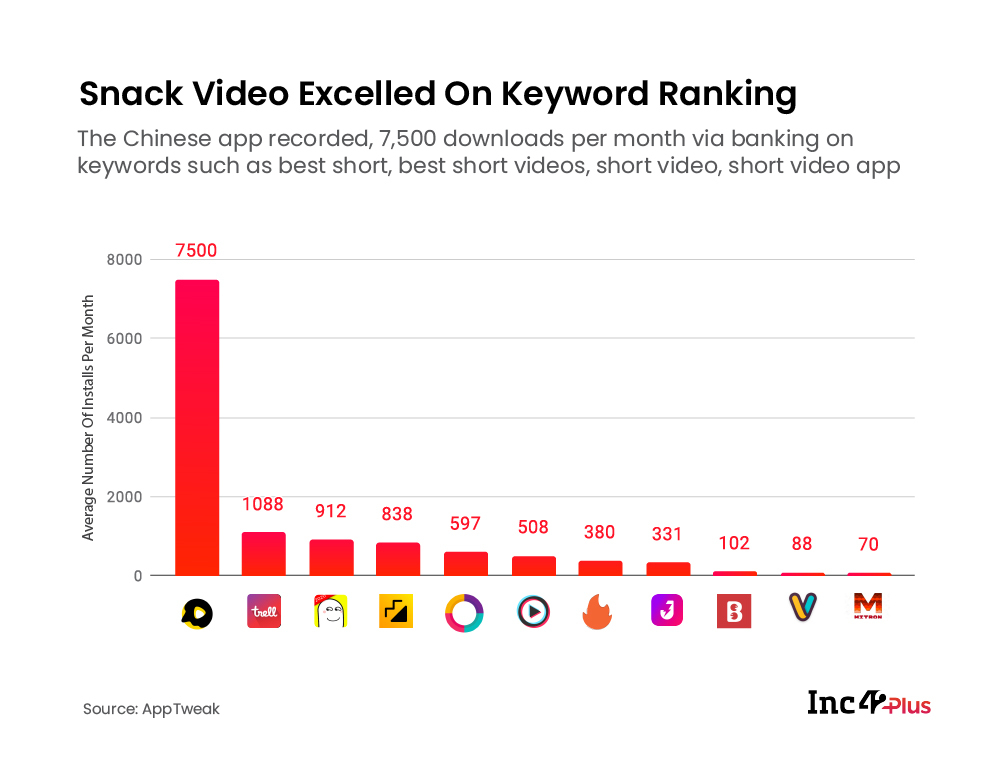 According to AppTweak, app power is a KPI (Key Performance Indicator) for the overall performance of an app in the store. It considers various factors such as app’s competitiveness by category and app store region overall.

App power has increased for most of the short video apps between July 1 and September 9, 2020. The likes of Snack Video, Josh, Moj, Xiaomi’s Zili app, and MX TakaTak reached the highest app power of 100 after August and have sustained the same. Meanwhile, apps such as Bolo Indya and Mitron saw a decline in their app power, which also affected their downloads during this period. There has been a decline of 20% and 26% in Bolo Indya and Mitron’s app power from June 29 to September 9, 2020, respectively. 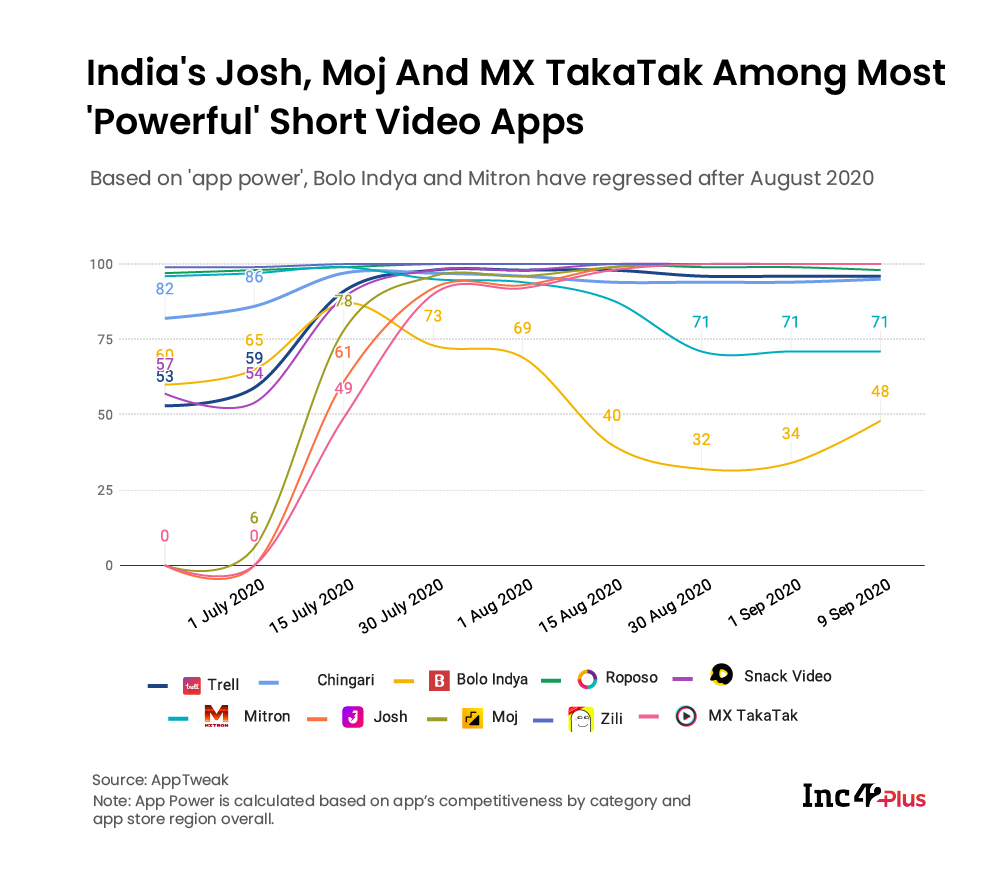 Roposo Poaches Visits From Other Apps

InMobi-acquired Roposo had the most number of page visits on Google Play Store through searches for other short video apps between June 29 and September 9, 2020 with 139.6 Mn visits. However, it could only get 26.5 Mn downloads during the same period.

Xiaomi-owned short video app Zili had the second-highest number of visits (101.3 Mn) to its page through searches for other apps. It was the sixth on the list of the most-downloaded short video app, with 25.3 Mn downloads in the same period. 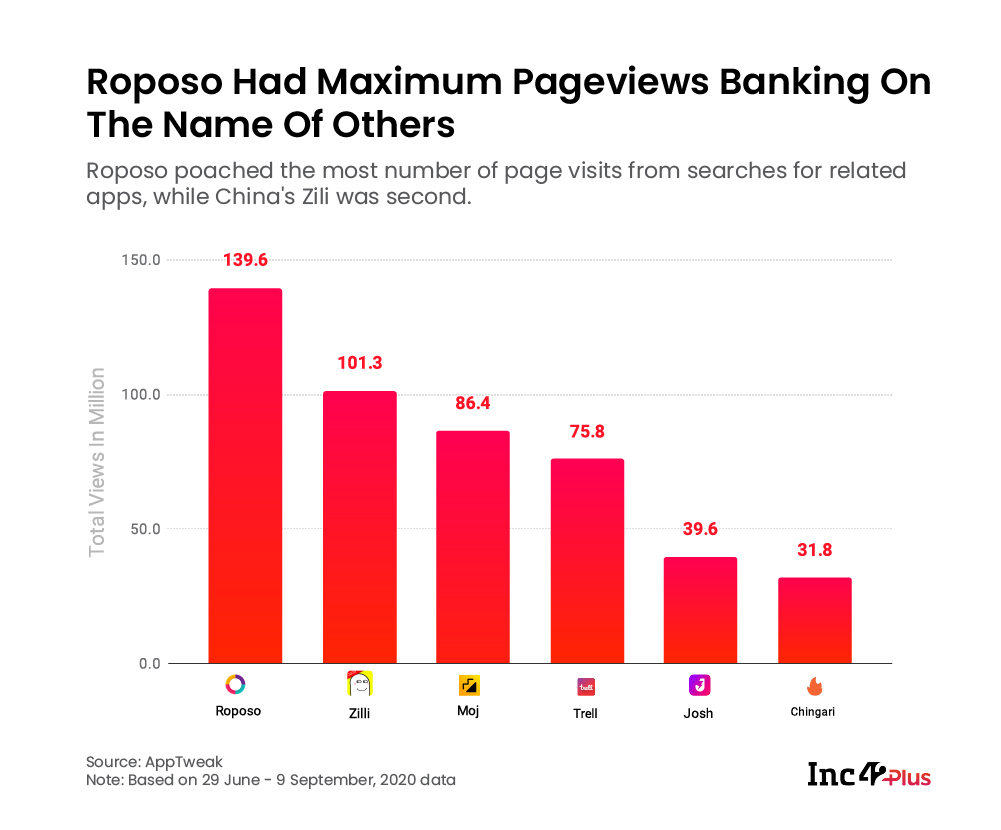 As seen in our analysis, the likes of MX TakaTak, Moj, Josh, and Roposo are best placed among the Tiktok clones to win the race between the homegrown apps. One common thread in this group is that each platform has a startup with considerable funding or steady cash flow backing it. In the case of MX TakaTak, it is Times Internet, while Roposo is now owned by adtech unicorn InMobi. Similarly, Sharechat, which runs Moj and Dailyhunt, which operates Josh, also have significant funding.

So in order to build a sustainable business, the other apps will have to focus on a plan for measurable revenue for creators as well. It also depends on the ability to attract advertisers, which not only brings the videos from the platform to the mainstream media’s attention, but also increases how much money the company has to play with.

Simply focusing on the “Made In India” aspect will not be enough to gain traction or attract advertisers. Companies have started adopting innovative solutions in order to attract advertisers. For instance, Bolo Indya introduced AI-driven conversation commerce for brands. Moreover, short video apps will also have to work on content moderation and ensure user safety in order to sustain advertisers on their platforms.

Lightspeed India’s Akshay Bhushan believes that short-video apps need to look like TikTok in the ultra-short-term because users are looking for a familiar UI, but they also have to evolve with time or they risk getting stuck in time and bigger brands might win the market.  “But as things mature, these apps will definitely take on a very different look, provide features that were different from Tiktok and be very different apps. It takes time to change user behaviour,” Bhushan told Inc42.

As seen in the immediate aftermath of the ban, the apps which have huge backing from their corporate or startup owners have had the biggest success and this indicates that only a mature platform with adequate tech and capital resources will win the short video market in the long run.

Explore More Such Insights With Inc42 Plus