After the ban on Chinese apps, Trell has registered over 12 Mn downloads in the last five days

Chingari, which had 2.5 Mn downloads before the Chinese apps ban, breached the 10 Mn downloads mark in three days 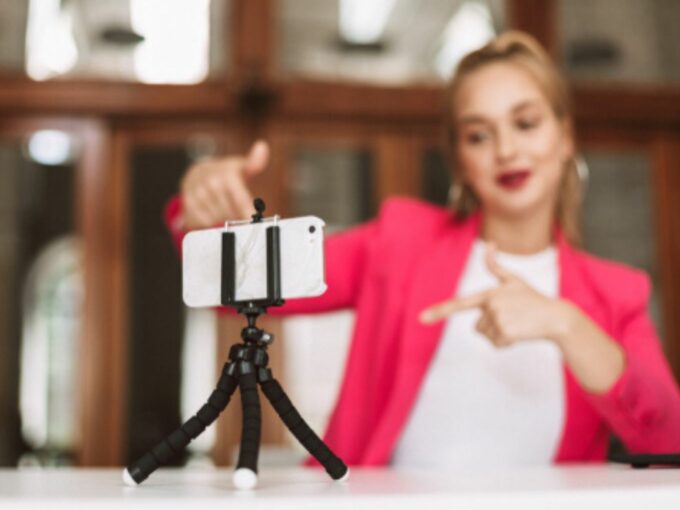 Indian lifestyle video application Trell has witnessed a surge in downloads since last week, when the government banned 59 Chinese apps including popular ones like such as TikTok and WeChat, citing threats to data privacy. The app’s founder Pulkit Agarwal, on Monday, wrote on Twitter that the app has seen more than 12 Mn downloads in the last five days. Agarwal added that the app’s monthly active users have more than doubled, and currently stand at 20 Mn. “Our servers have been updated now to handle the massive scale. Stay Tuned!” Agarwal wrote. 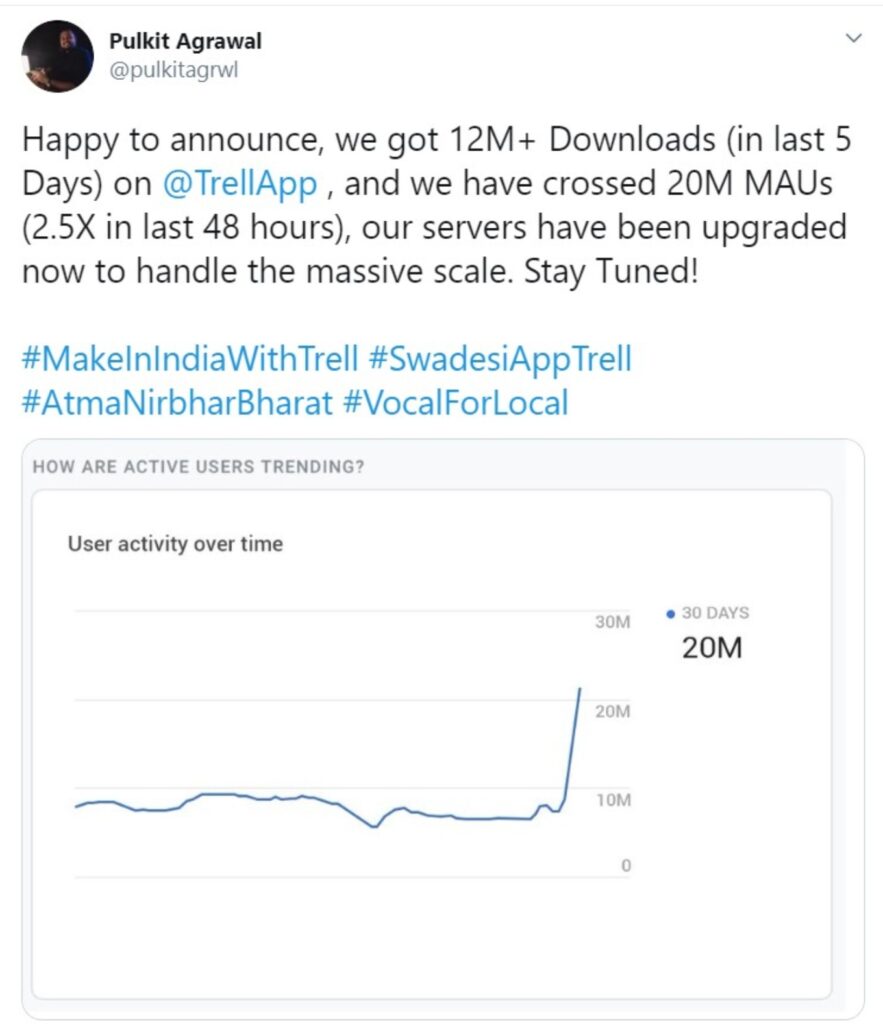 Trell, a lifestyle content commerce platform, also offers short video sharing features to its users. After the government’s ban on ByeDance-owned TikTok, many users rushed to Trell. The homegrown app has been trending at number one on the Google Play Store under the ‘Free Lifestyle Apps’ segment, with 45 Mn downloads.

Trell allows users to share their experiences, reviews and recommendations across categories such as fitness, health, lifestyle and fashion, among others. The platform has witnessed 500K video uploads in a single day, with 220K content creators joining the platform to share their content. In March, Trell had raised $4 Mn in its pre-SerieA funding round led by Sequoia Capital India’s Surge, a rapid scale-up program for early-stage startups. 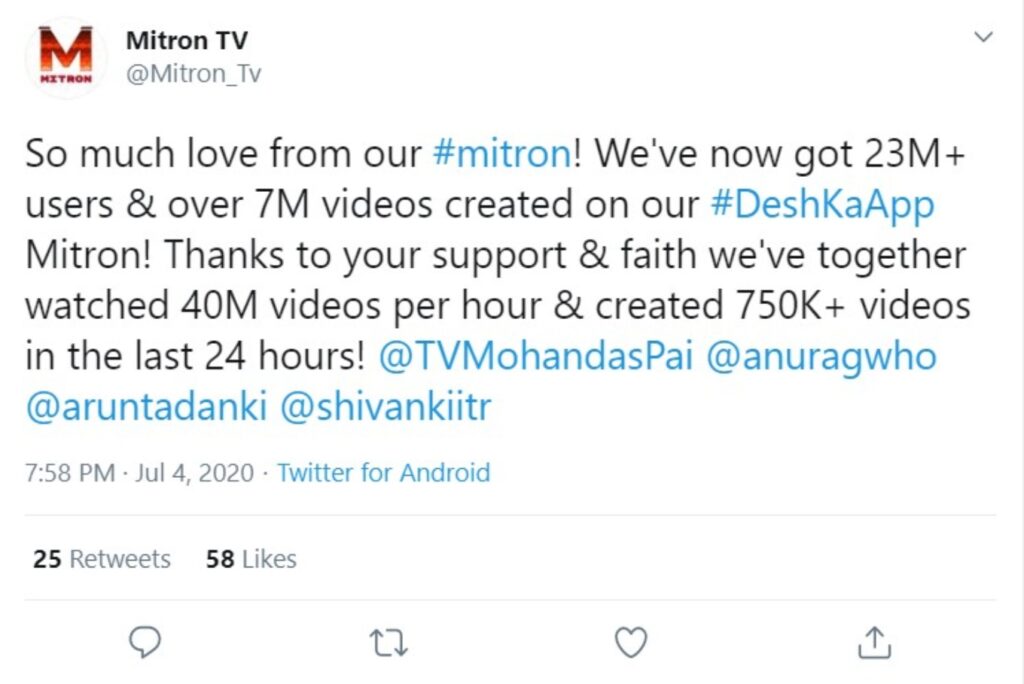 Trell is not the only Indian application reaping the benefits of the government’s ban on Chinese apps. The ban on TikTok, which had more than 120 Mn active users in India as of June 2019, left a gaping hole in the short-video sharing platform space. Indian apps such as ‘Mitron’ and ‘Chingari’, billed as Indian alternatives to TikTok, have seen a huge uptick in terms of users and video uploads.

Mitron reported that its daily traffic had jumped 11-fold since the ban on TikTok. Further, the app, which currently has 17 Mn users in India, is seeing more than 24 Mn video views every hour. On July 2, Mitron raised INR 2 Cr from 3One4 Capital and Let’s Venture

As for Chingari, the app which had just about 25 lakh downloads, saw a jump in demand on June 29, after the ban on Chinese apps was announced. Within three days, the app breached the 1 Cr downloads (10 Mn) mark on the Google Play Store. The app’s co-founder Sumit Ghosh called Chingari an ‘accidental startup’, further attributing its recent success to the makers understanding the needs of people living in India’s Tier-2 and Tier-3 cities. 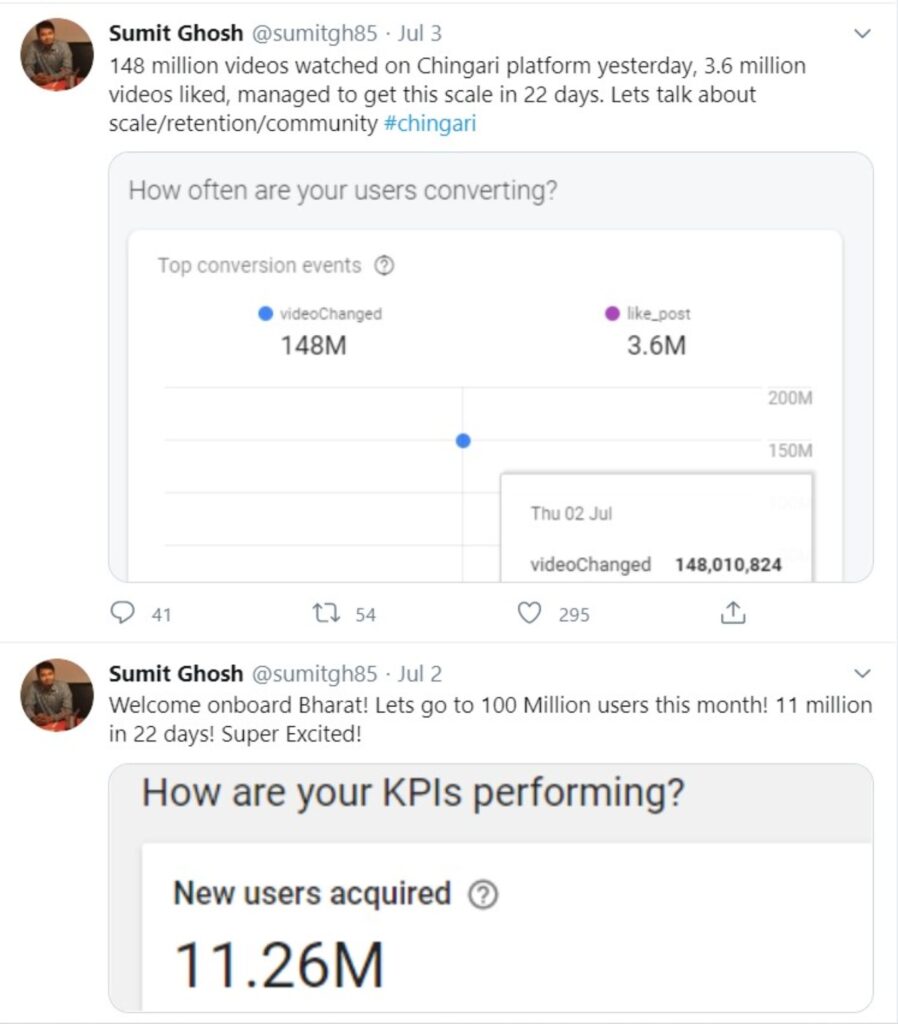 The surge in the userbase of Indian apps has given further impetus to PM Narendra Modi’s call for ‘AatmaNirbhar’ Bharat or self-reliant India. Following the ban on Chinese apps, in the wake of border clashes between India and China, IT Minister Ravi Shankar Prasad had also said that India must end its dependence on foreign technologies that push their own agenda.

According to an App Annie report, Indian users spent over 5.5 Bn hours on TikTok in 2019, noting a whooping hike from 900 Mn hours in 2018. The number of monthly active users (MAUs) on TikTok increased by 90% year-on-year (YoY) to 81 Mn as of December 2019. To give a further push to TikTok, parent company ByteDance had decided to discontinue Vigo Video and Vigo Lite in India from October this year.

Meanwhile, about a million Indian TikTok users depend on the platform to make money, according to influencer marketing platform Zefmo Media, and for these users — often called influencers — the ban comes after major revenue upheaval from the Covid-19 pandemic and lockdown. 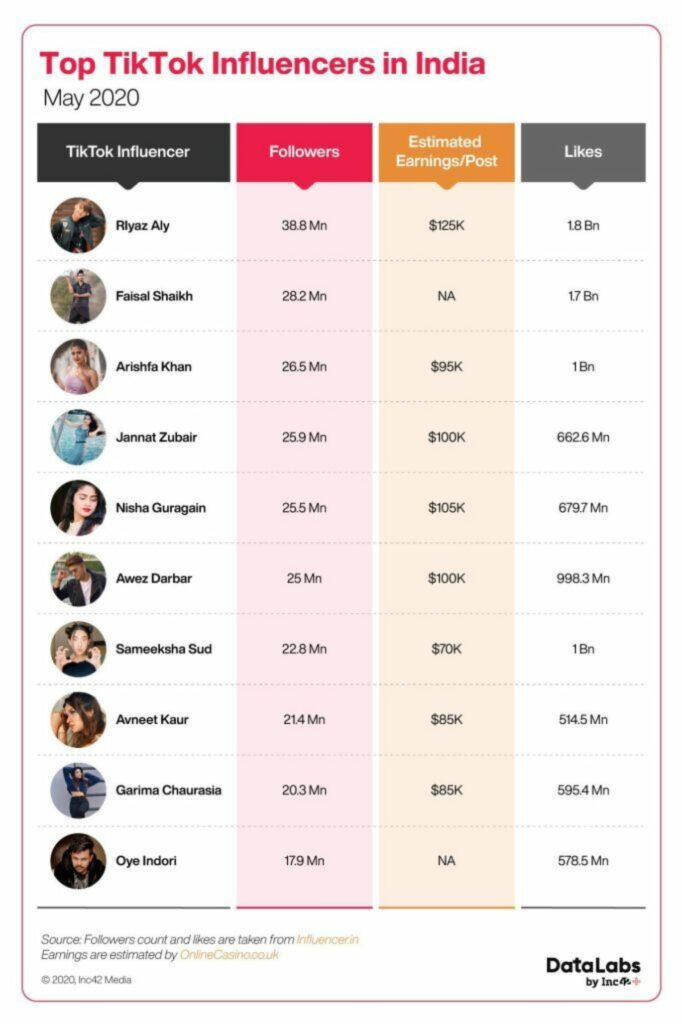 With the ByteDance-owned app blocking its services in India, influencers have now been forced to look for newer platforms to build their following. Chingari and Instagram have emerged as the new frontrunners for the exodus from TikTok.

According to Zefmo CEO Shudeep Majumdar, influencers will now have to slug it out for a piece of the hyper-competitive market on Facebook, Instagram and YouTube. “It will be back to basics and building their following from scratch,” Majumdar said.