With a UI that closely mirrors TikTok, Chingari is looking to position itself as a direct replacement to the Chinese app

It claims to be organically adding 1Mn users daily but competition from Instagram Reels, Mitron, Bolo Indya, ShareChat and others is growing by the day

“Given the choice between two apps which are exactly the same, but one is made in China and the other one is made in India — which one will you choose?” — Chingari cofounder Sumit Ghosh.

The growing anti-China sentiment in India and the government ban on 59 Chinese apps has brought intense focus on Indian apps and alternatives to Chinese products. On June 29, 2020, around 8 pm, MeitY’s released the list of 59 banned Chinese apps including popular short-video platform TikTok.

As Chingari’s Ghosh describes the frenzy, “Right after the ban announcement, the platform experienced 500K – 600K new downloads for the whole next day. The servers started cracking, the backend infra was going crazy, we had to shut a lot of APIs down,” Even at the time of our conversation (past week), Ghosh claimed to be witnessing 1 lakh downloads per hour.

Besides Chingari, short-video sharing platforms like Mitron, Bolo Indya, ShareChat’s Moj, Gaana’ HotShots and Trell have also reported a steep rise in the number of user traction after the ban. Even Instagram has launched its TikTok-like ‘Reels’. So what exactly differentiates Chingari from these platforms?

The difference is that Chingari is the closest to TikTok, in terms of UI and Ghosh claims that Chingari is also looking to solve one gap that none of its competitors have — the creator tools that made TikTok popular. “Other players think that people will just upload videos from the camera or their gallery, and the videos will go viral. But it is not like that, it is the creation tools that made TikTok what it is today,” he said.

Chingari claims to have perfected all TikTok-like creation tools except the AR filters, which are currently under work. Chingari’s UI is indeed a close replica of TikTok app to the extent that even the arrangement of buttons and the profile page look like mirror images.

For a company whose unique selling point is that it is an Indian company with TikTok-like features, copying the UI seems like an intended move. And this also allows Chingari to be in a safer position to compete with TikTok if it returns to India.

Like any other content platforms that thrive on the passion of creators, the success of Chingari depends on the quality of the content and the variety of creators it attracts. For instance, if there are 1000 creators on the platform, not only will more users join up, but it will also attract more creators to tap the rising user base. It’s a cycle of growth that each content platform needs to thrive. And once that happens, it will become difficult for creators to abandon their acquired social following and reach.

To achieve this, Chingari is running a rewards campaign for creators. Every content creator on the platform gets paid depending on how viral their videos get. “For every video that one uploads on the Chingari app, you get points (per view) which can be redeemed for money,” according to a company statement.

Chingari is also onboarding influencer managers and agencies to onboard more creators on the platform. Till now, the platform has tied up with 200 such agencies and plans to scale these partnerships to 10K after its Series A funding round, which is expected to be announced by the end of July 2020.

Chingari is also working with a few brands that are willing to pay about 20%-30% of what they were paying to TikTok, in return for some influencer marketing on the platform. These brands primarily include fashion and ecommerce companies, noted Ghosh. The company is not focused on monetisation at this point of time, but once the user base is established, Chingari plans to monetise through advertisements like Facebook and Twitter.

Given that there is no monetisation model currently, Ghosh claims that Chingari does not store any sensitive user data at the moment. But once it launches ad-led monetisation, the company will be collecting user data including the age and gender to target them with the right ads. Currently, the login process uses a Google account to onboard users. 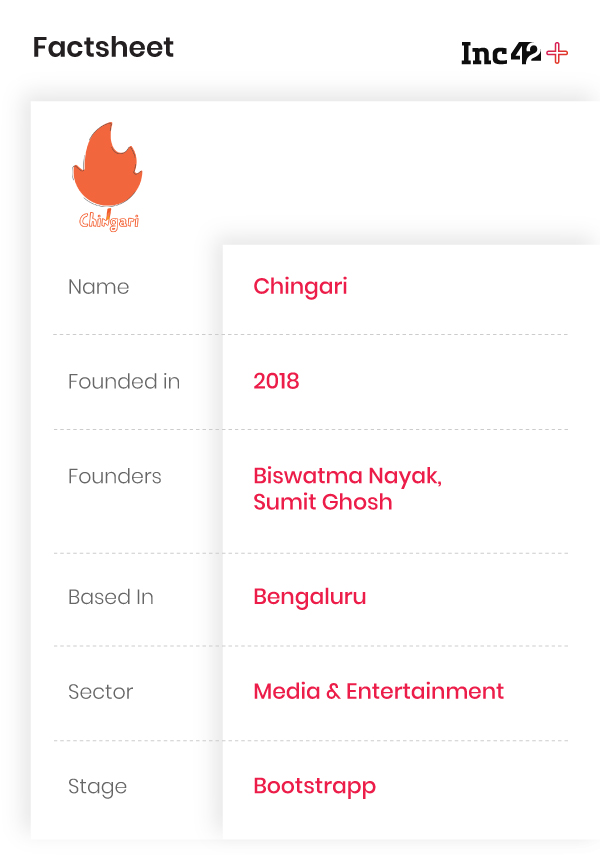 Started in 2018, the development of Chingari app was led by cofounder Biswatma Nayak along with Siddharth Gautam and other team members of Globussoft which includes Ghosh. Chingari was incubated at Ghosh’s IT consultancy firm Globussoft. Following the growth in user base, it is now being registered as a separate entity and Ghosh will exit Globussoft to join this new entity.

In a recent UI update, Chingari has moved the position of the games sections to a side menu. According to Ghosh, gaming was acting as a friction for new users who are looking for a TikTok replacement and the company does not want to distract them from the core offering which is short-form videos.

Further, the news aggregation section has also been moved to the sidelines. It primarily attracts the audience over the age of 35 who come to the platform and consume news. However, Chingari plans to introduce a one-minute news bulletin video clip instead of the text format in the near future to boost its reach. This is similar to what Dailyhunt and Inshorts offer in terms of news.

Since the ban, Chingari’s downloads have jumped to 22 Mn downloads from 3.5 Mn, and it is also seeing 5 Mn daily active users (DAUs) and 124 Mn video views per day. Going forward, Ghosh is aiming to reach 100 Mn users over the next three months. This is based on the company’s current growth rate, which is 1 Mn users added per day. At this rate, it will cumulate to 90 Mn in the next three months, but Chingari is hopeful of a boost in the next month or so to get there sooner.

But in an earlier conversation, Chingari’s competitor Bolo Indya Founder Varun Saxena told Inc42, “The race for Indian video apps is not to acquire users, it is going to be for retaining these users two weeks from now,” he added. Chingari claims to have a 10%-12% retention rate currently, and how well it is able to keep the new users around will determine whether it can really turn the spark into a roaring fire.

With inputs from Kritti Bhalla.

The original version of this article erroneously mentioned that Chingari had to turn down a lot VCs after time of Chinese app ban.  We have updated the article to reflect that the company had to shut down a lot of APIs after the Chinese app ban. We apologise for the mistake.