Hotstar Vs Netflix Vs Amazon Prime: Which One Was India’s Hottest Video Streaming App In 2021?

Hotstar Vs Netflix Vs Amazon Prime: Which One Was India’s Hottest Video Streaming App In 2021? 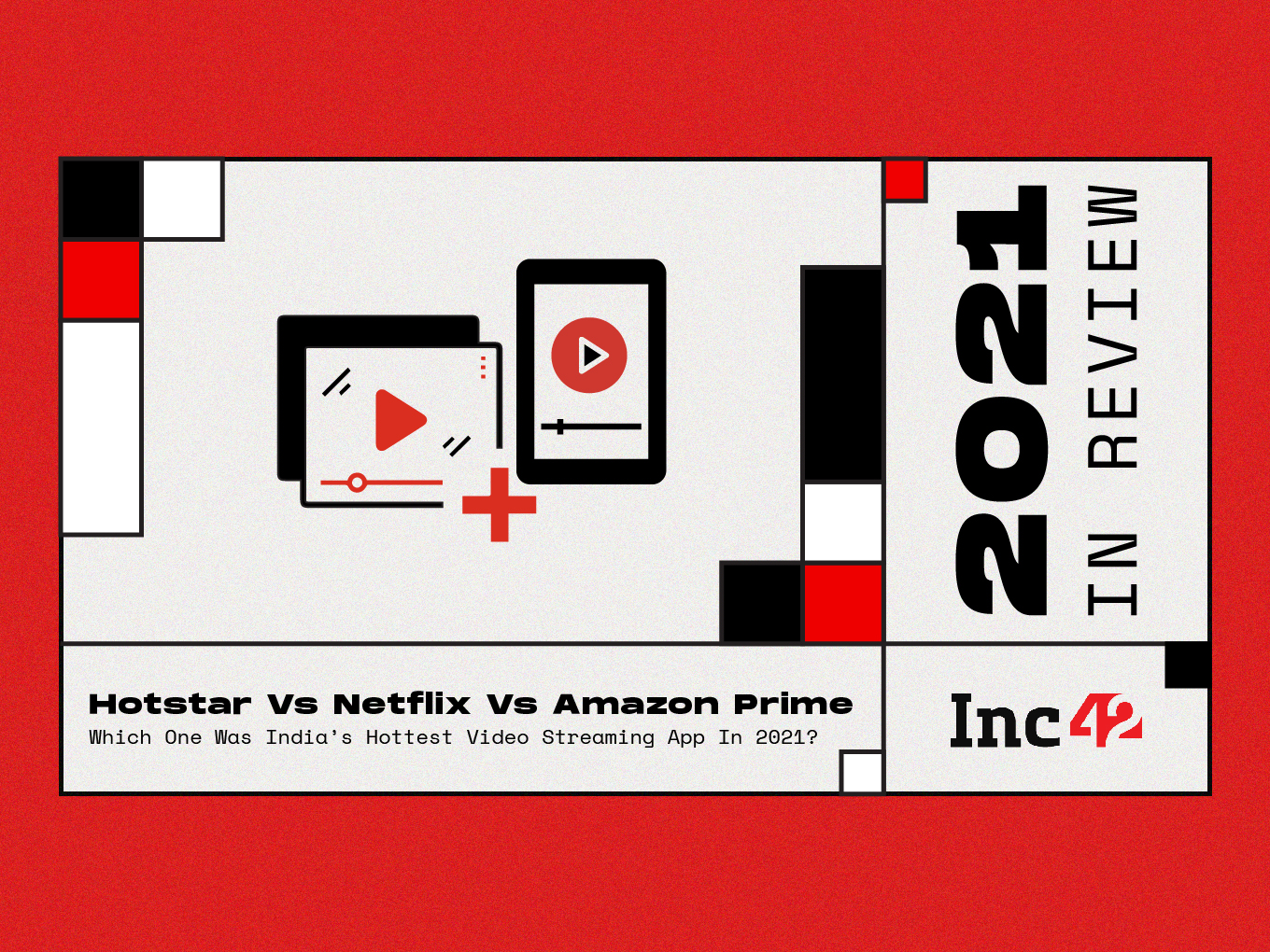 The Indian OTT video streaming market is expected to cross $12.5 Bn by 2030, says a report by RBSA Advisors

Since the Covid-19 pandemic hit the world a couple of years ago, nearly every industry/segment suffered a huge setback. But few had it worse than the entertainment industry as movie production, TV shows, and every other form of content creation came to a halt for months due to the unprecedented health crisis and prolonged lockdowns to contain it. The only silver lining was over-the-top (OTT) video content, and the average video consumption of Indian users skyrocketed in the absence of other options.

Both original and popular content, in English and regional languages, found favour with a burgeoning Indian audience.

Contrary to popular perception, India also evolved beyond a price-sensitive market, and more consumers opted for paid content. This was underlined by the 55-60% year-on-year SVoD (subscription-based video on demand) surge in 2020, with more than half the new users expected to continue the service/s, said the BCG-CII annual M&E report.

The Corona crisis was undoubtedly the key growth driver in the video OTT space. But the ground was ready for a leap to the next level due to infra expansion (a robust internet network and extensive smartphone penetration), a growing affinity for vernacular content and the rising popularity of content live streaming. So, it is not surprising that the Indian market for video OTT is expected to reach $12.5 Bn by 2030 from $1.5 Bn in 2021, a report by RBSA Advisors says. 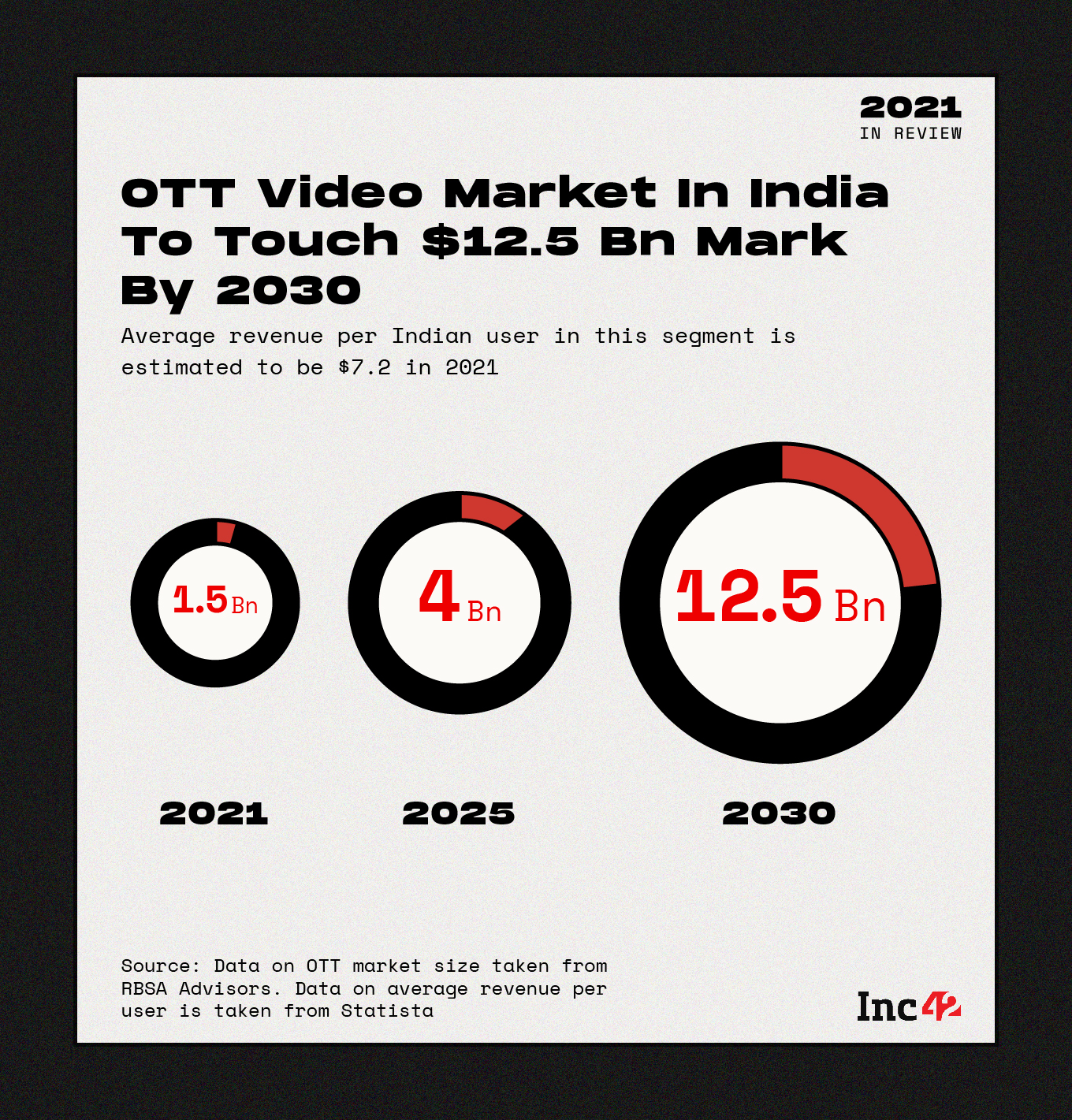 Regional-language programmes across OTT video platforms account for a larger swath of users and revenues than the Hindi/English audience. For instance, around 40% of Hotstar’s traffic was part of the regional audience, and 63% of total video consumption happened in non-metro markets in 2019.

Top players in this space have been busy adding more regional content to their libraries. Some of the most popular languages on OTT apps included Tamil, Telugu, Bengali and Marathi. 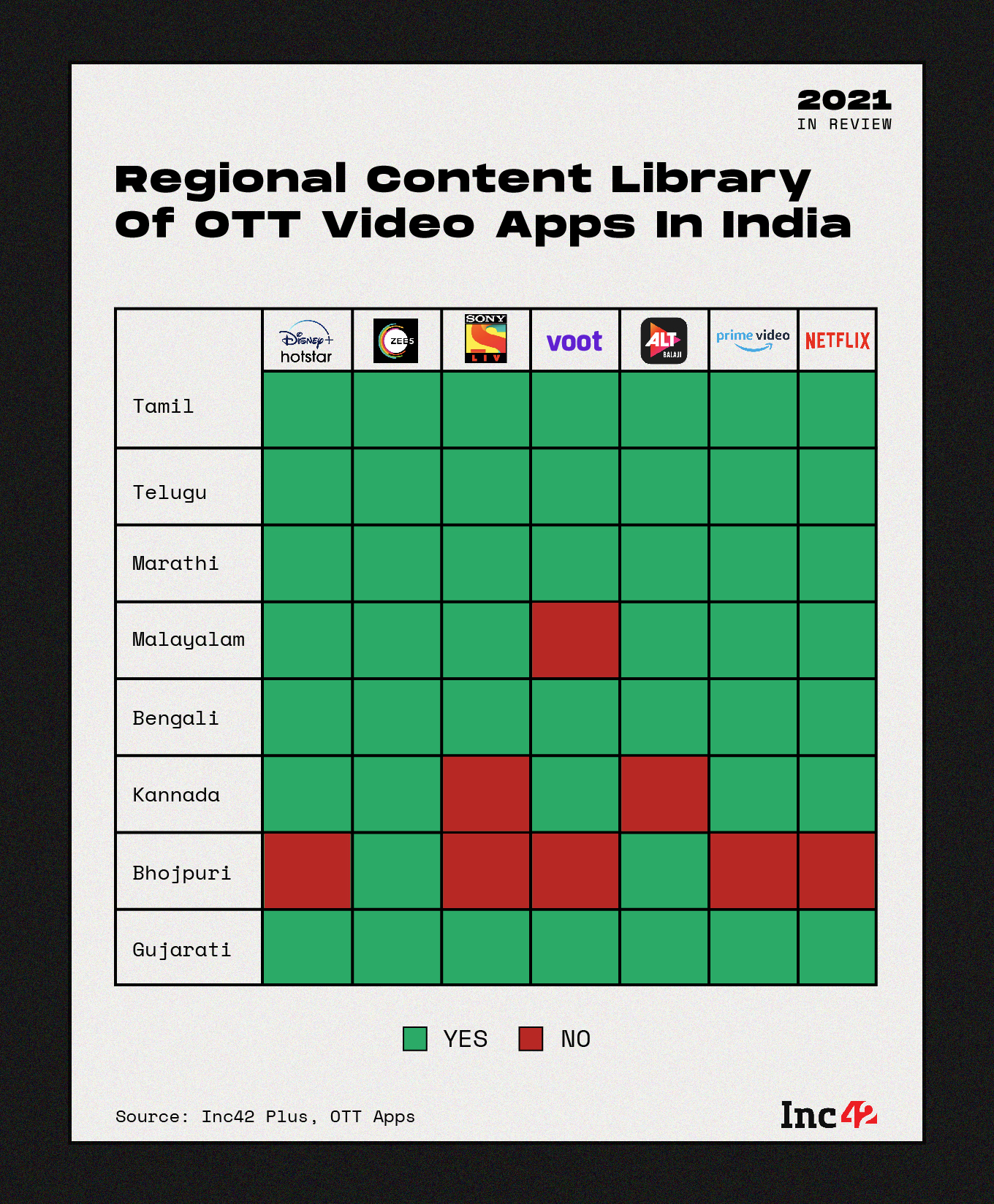 As part of our annual 2021 In Review series, we decided to look into the performance of leading OTT players operating in India, the downloads they recorded and who is poaching visits from other OTT video apps.

OTT video platforms in India are gaining traction due to the growing appetite for on-demand video, the increasing popularity of original content, the rise of regional content and a shift in the video consumption pattern owing to the pandemic. 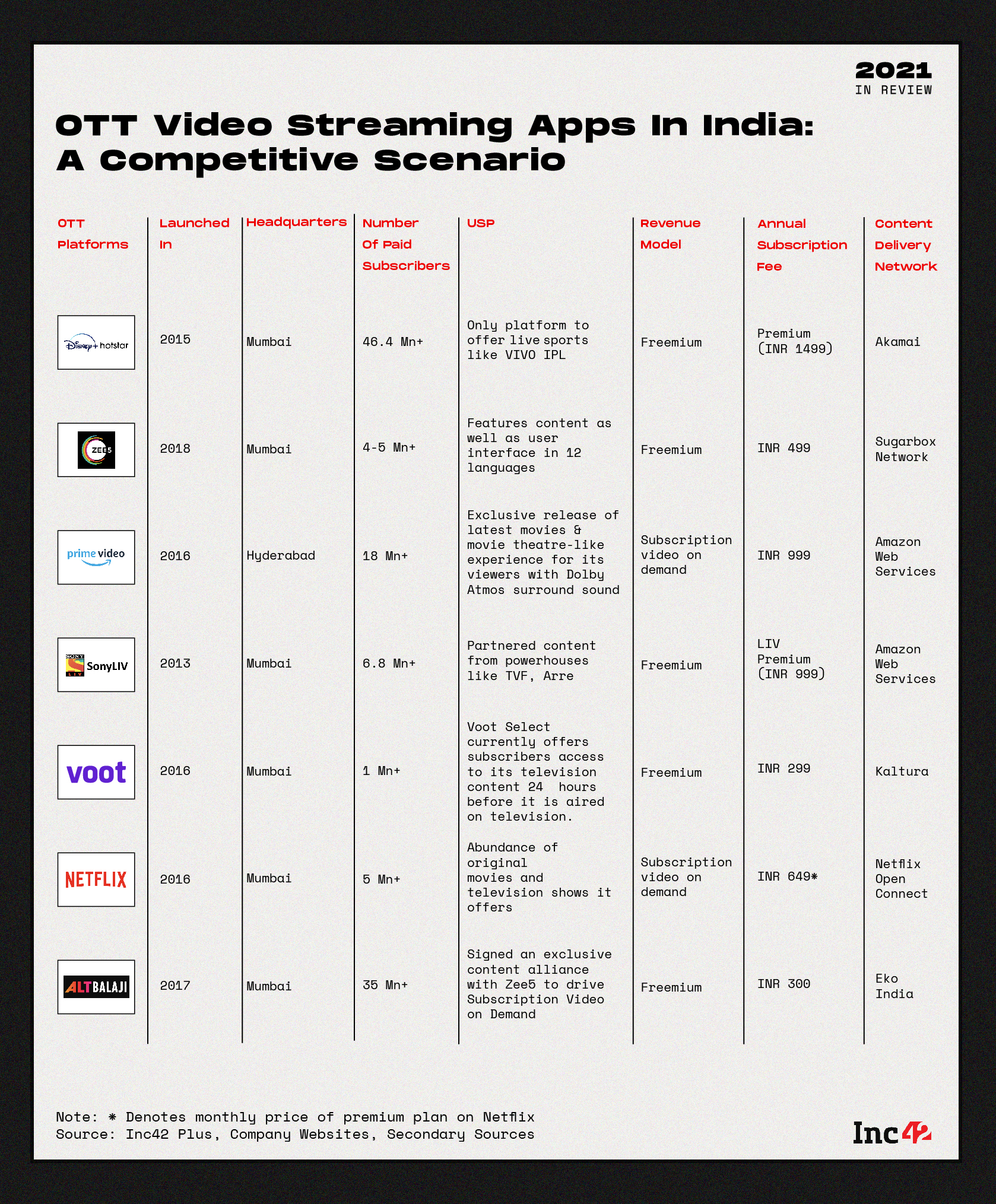 Inc42 has partnered with AppTweak to understand how these OTT video streaming apps have performed in the past few months in terms of downloads, page views, app power and more. Here are a few takeaways:

Disney+ Hotstar had a 17% market share in 2020, a market study by RBSA Advisors said. Hotstar & Zee5 Are The Most Powerful OTT Video Apps In India

According to AppTweak, app power is a key performance indicator (KPI) for assessing the overall performance of an app in the Google Play Store. It considers various parameters such as an app’s competitiveness by category and the app store region overall.

Hotstar and Zee5 led the video OTT segment throughout the year, but the app power of AltBalaji declined during this period. It had the lowest app power among all video OTT apps in India. 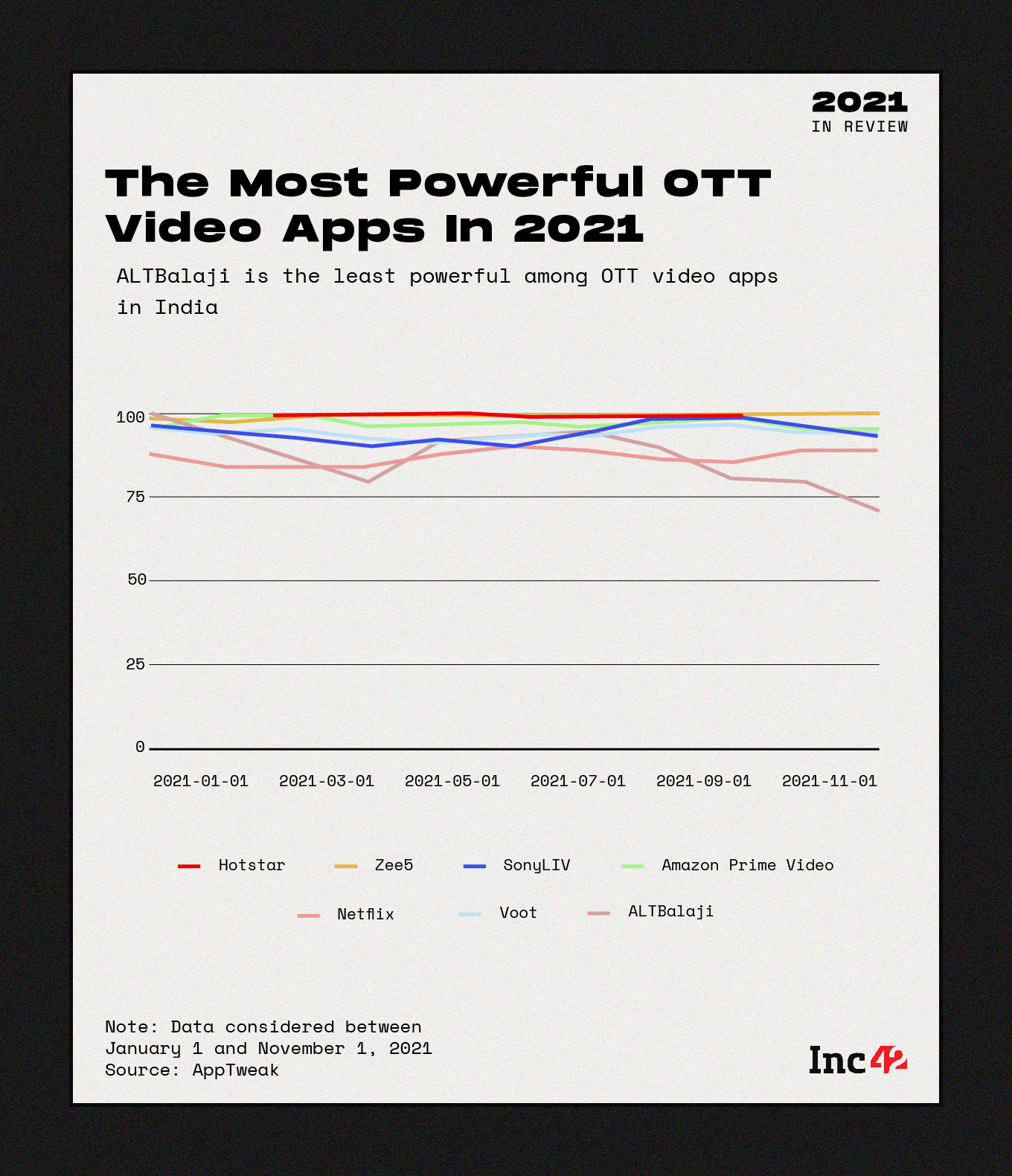 Between January and November 2021, Hotstar recorded the maximum number of similar views on the Google Play Store — a total of 552.5 Mn. According to AppTweak, similar views present an estimated number of impressions an app gets when it appears under the ‘similar apps’ suggestions on a competitor’s page. Interestingly, Hotstar gained around 33% of similar views, or 184.1 Mn, via the Zee5 platform.

Zee5, another popular OTT video app, clocked the second-highest similar views at 523.6 Mn. What’s more, it gained around 35% of similar views, or 184.1 Mn, via Hotstar on the Google Play Store. It means about 35% of Zee5’s impressions came from people who actually landed on the Hotstar page. Zee5 was India’s second most downloaded OTT video streaming app, with 55.4 Mn downloads during January-November 2021. 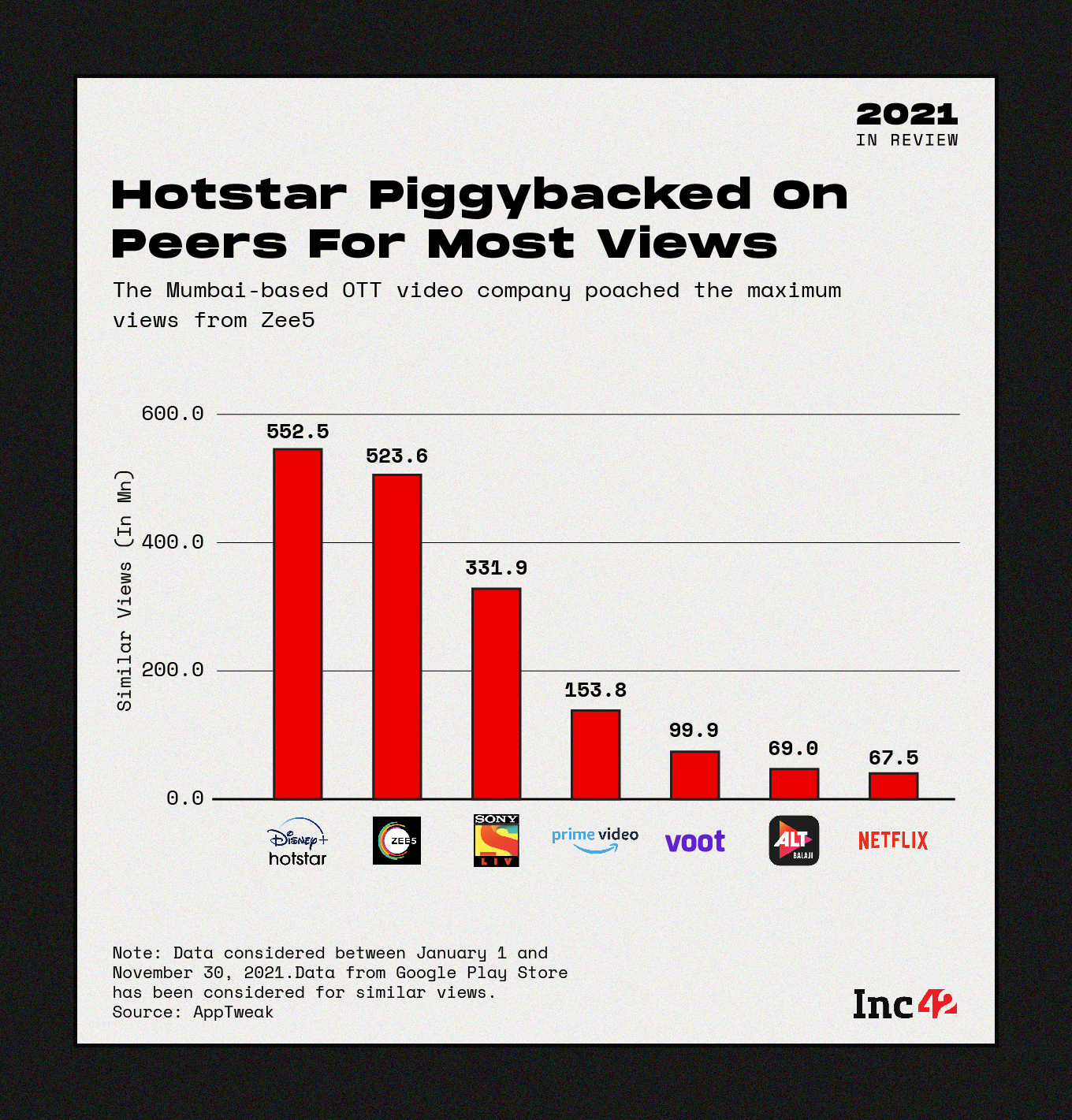 What The Future Holds For Video Streaming Apps In India

Tech excellence forms the base: With more than 30 local and global players catering to India’s growing need for on-demand entertainment, the OTT space is likely to witness many exciting new trends. The pandemic might have triggered the OTT boom, but this segment is expected to grow exponentially, giving rise to a unique hybrid play and content diversity. The robust infrastructure will make the experience more fulfilling even as companies focus on greater adoption through regionalised matter (from Tier 2, 3, and 4 locations) and personalised content recommendation via AI and analytics.

Recipes to cope with subscription fatigue: The OTT segment will be hyper-competitive in the coming years, leading to significant price drops and content innovation. Take, for instance, the recent price cuts by Netflix, between 18% and 60% across plans, to woo ‘Bharat’ consumers and drive subscription volume. Several players such as Zee5 and Voot have also slashed their prices to penetrate into the Indian market as volume play remains one of the most viable options in a vast country like India.

Again, others are looking at ‘bundling’ services to bring variety and viability to their business models. Much has been written about subscription fatigue as Indians, on average, subscribe to two or more paid OTT services. This may not be sustainable in the long run, especially when the world returns to normalcy and offline entertainment once again begins its journey with a bang. However, ‘bundled’ content from a vast network of partners is not likely to disappoint entertainment seekers searching for novelty.

Disney+ Hotstar could be a case in point. The OTT player hiked its subscription fee when Hotstar Premium was revamped to the current brand and ushered in an entertainment experience for the entire family. Its new offerings include Superhero movies, animated films, popular kids’ programmes and much more, while Indian subscribers can watch their favourite shows/movies in the language of their choice. A separate Disney+ branded section also helps users navigate Disney, Pixar, Marvel, Star Wars and National Geographic content available on the platform. 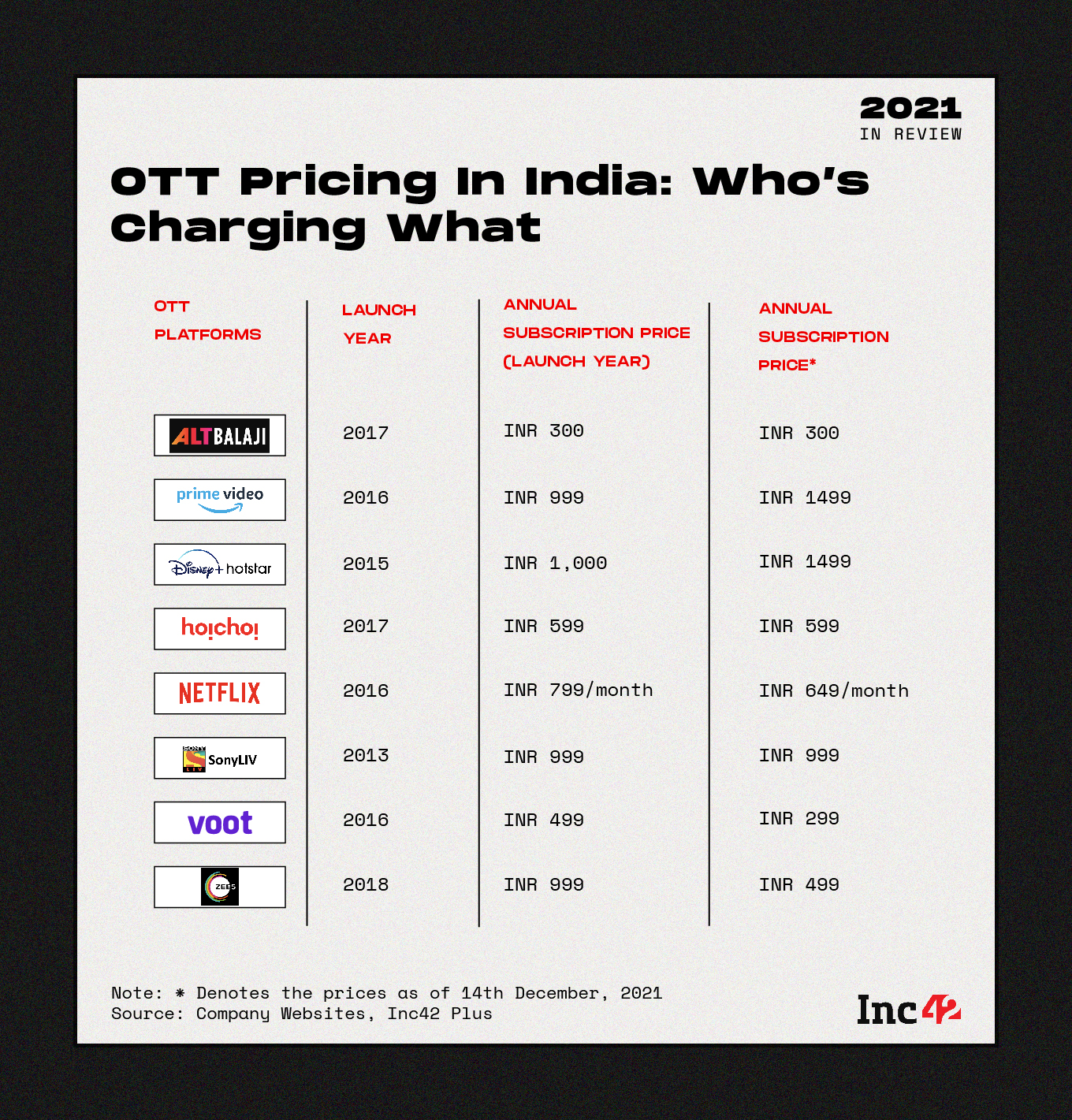 Will quality, content value win the day? According to many experts, the quality of content will eventually decide the winner instead of price dilution. Most OTT players like Netflix, Amazon, Disney+ Hotstar and others have already made massive investments in original and acquired content. And this will help them drive revenue by optimising the SVoD model.

This may not be as far-fetched as it sounds, even in a price-sensitive market like India. According to Gadgets 360, most OTT platforms are now developing Indian original content to promote what is popularly known as value for money. Disney+ Hotstar and SonyLIV have already increased their India-focussed content output by nearly 200% and 300%, respectively.

Also, as many as 400 originals have been released on the OTT video platforms in India. Not to be outdone, Amazon Prime recently confirmed that it had made 70 originals in Indian vernaculars. But all this comes at a cost. Prime Video has recently increased its annual subscription fee to INR 1,499 from INR 999, a 50% jump. If the new-age consumers across India are ready to pay for quality content, many OTT players are likely to follow suit.

New formats to attract a new audience: Finally, OTT players have begun to realise the tremendous potential of live streaming events and performances. Once again, the groundwork has been laid during the pandemic, and scores of companies are live streaming such events for months. For OTTs keen to carve a money-churning niche here, both content and format need to be disruptive from Day 1. And therein lies the secret of wooing consumers. Advanced technology and user-friendly features can bring random viewers on board. But making the content sticky enough to retain them is what will win the streaming war.