2020 In Review: From Agri Reform To App Bans — The Policies That Mattered For Indian Startup Ecosystem

2020 In Review: From Agri Reform To App Bans — The Policies That Mattered For Indian Startup Ecosystem 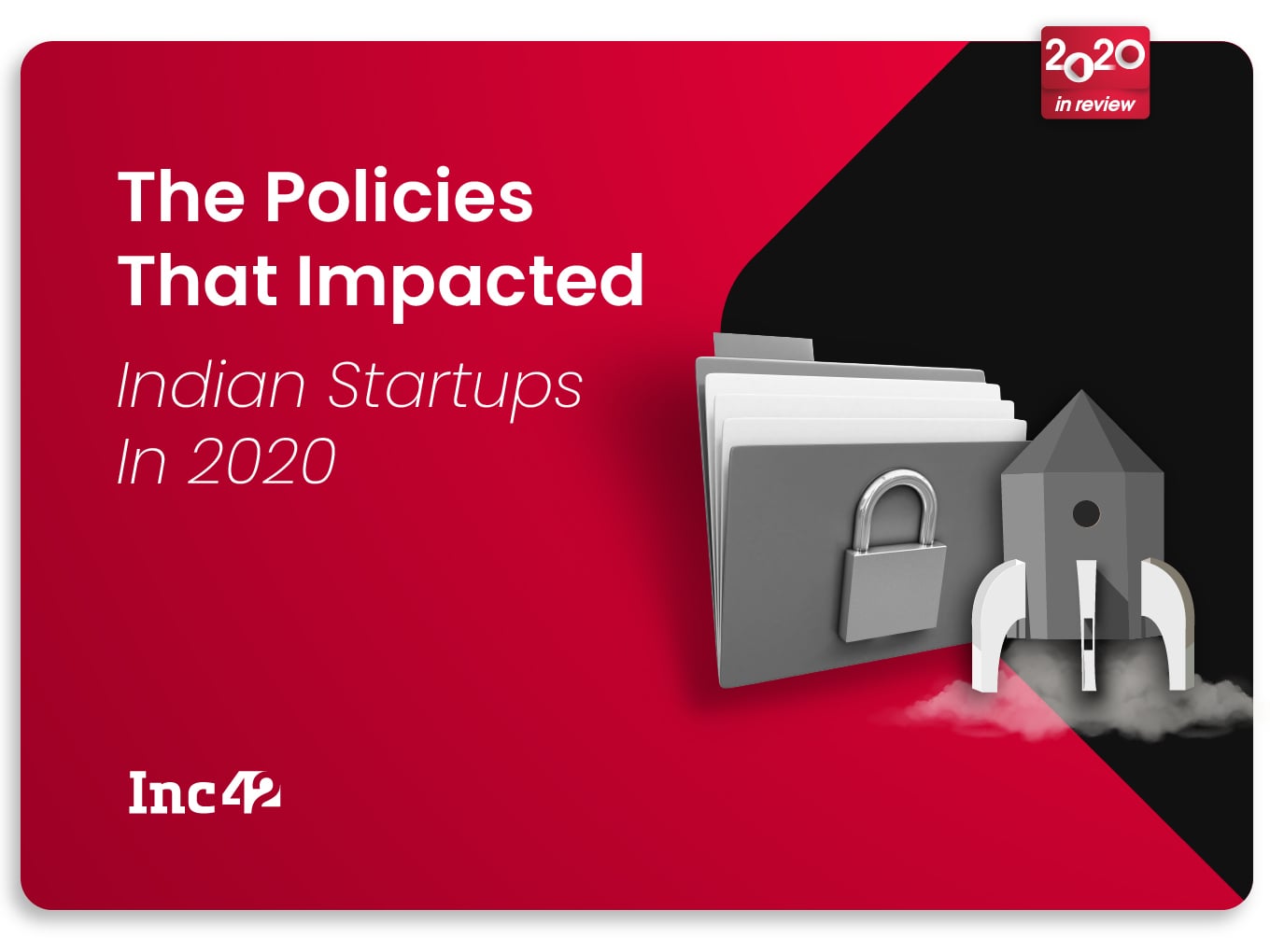 Among the major policies, the National Education Policy and the National Digital Health Mission have been seen as the major enablers for the startup ecosystem

The farm reform bills, passed in the last quarter of the year, has taken the Indian market by storm, but it’s expected to be a major opportunity for startups

Changes in foreign investment policy, regulations brought on by geopolitics and some controversial bills and reforms threw up hurdles for startups in 2020. Here’s a look

While 2020 will always be known as the year of pandemic, it has also been a year for new policies and reforms that have changed a lot of the Indian tech landscape. From bans on Chinese products to scrutiny on foreign investments and a host of new policies and hurdles to deal with, startups have had an eventful year to say the least.

While the year began with great expectations with the Union Budget 2020 on February 1, which promised a slew of reforms, many of these were soon turned moot by the rampant pandemic. The Covid-19 pandemic brought on recession and downturn across sectors, with many calling for relief and policy changes to help startups and MSMEs survive.

With the nationwide lockdown announced on March 24 and the complete halt of most retail and physical businesses, many ventures and startups had little or no cash left to operate with. In May, the government announced the relief package for startups, which kickstarted some of the recovery, but the RBI moratorium, changes in foreign investment policy, regulations brought on by geopolitics and some controversial bills and reforms have thrown up hurdles as well.

Here are the most notable policy decisions over the past 12 months:

Even as the pandemic dominated most discussion throughout the year, 2020 is ending with a major focus on the agriculture and agritech sector.

As protests from farmers across the country intensify, the three controversial farm laws will continue to be debated. The Farmers’ Produce Trade and Commerce (Promotion and Facilitation), the Farmers (Empowerment and Protection) agreement on Price Assurance and Farm Services and the Essential Commodities (Amendment) passed by the Parliament on September 20 hope to open up the prospects for startups in contract farming and other areas.

While a large majority of the startup founders and industry experts have a positive outlook on the agri farm laws, the same is not the case with farmers. Some believe that there will likely be logistical challenges in the short term, alongside the gap in awareness and understanding of the laws on a farmer-level and the implications and impact on how farms operate.

Though these farm laws offer a plethora of opportunities for startups and entrepreneurs, one cannot ignore some of the grey areas, and industry experts believe that there is a need of close monitoring by the authorities so that farmers can trust private entities with fair pricing and at most transparency, thereby ensuring not to create ‘more middlemen’ in the process, where farmers have already been exposed to, for decades.

Amid these uncertainties and chaos in the sector, some of the opportunities for startups in the agritech space, as highlighted by industry experts include:

The ‘Nationalist’ Wave In Indian Tech

In the midst of the countrywide lockdown, border clashes between India and China led to a series of events that became an undercurrent for the second half of the year.

The bans meant that Indian tech startups and companies had the opportunity to build alternatives to the popular banned Chinese apps, especially in the short video space, where TikTok had left behind a big vacuum. Along with the Atmanirbhar Bharat and ‘Vocal For Local’ campaigns, the ban on Chinese apps gave a big push to Indian tech products.

While India’s ban undoubtedly grabbed the most headlines, the government also took measures to curb foreign influence and opportunistic takeovers in the wake of the recession. Under the revised FDI policy, which was amended in April this year, the Indian government has mandated that all investments from China and other land-border nations would only be through the government approval route, thus complicating fundraising for a lot of startups already in discussion with Chinese funds and VCs.

Ecommerce Focus On ‘Made In India’

While the ecommerce policy is poised to focus on data localisation and predatory pricing among others, it is also said to bring local retailers and sellers to the spotlight. Besides this to push the prospects of Indian products during the Covid-19 pandemic, the consumer affairs ministry had passed new rules and regulations mandating ecommerce players to display the country of origin for products listed on their platforms. Ecommerce giant Amazon was also fined INR 25K for not displaying this mandatory information.

On July 29, 2020, the HRD ministry announced the launch of new National Education Policy (NEP), which emphasises on digital education and remote learning along with the question of equitable access to education, with the core focus on bridging the digital divide.

The primary objective of the NEP 2020 is to create standards of learning in public and private schools. This includes major reforms in school education, where board exams will be low stakes and would test actual knowledge instead of rote learning. Schools will also have 360-degree holistic progress cards, track learning outcomes through a national assessment center called PARAKH and more. The policy also seeks to overhaul edtech in public colleges and schools to increase access for disadvantaged groups, while online learning content will be available in regional languages.

NDHM — The Future Of Indian Healthcare

With the launch of National Digital Health Mission (NDHM) in August, India took a big leap towards enhancing the crumbling and aging healthcare infrastructure and ecosystem. While digital healthcare has been a key focus in the fight against the pandemic, the NDHM creates the roadmap for the future.

Part of the National Health Stack, the NDHM will bring a unique health ID for every Indian citizen — similar to Aadhaar or UPI IDs — digitised health records and registry of doctors and health facilities. The NDHM has invited healthcare providers, software providers, startups to co-develop healthtech products.

The new policy is expected to form the backbone of the country’s integrated digital health infrastructure, which will bridge the existing gaps between the stakeholders. However, industry experts feel that in the absence of a strong personal data protection law in the country, these digital laws would be riddled with flaws.

Expected to be a major legislation this year, the Personal Data Protection Bill is yet to see the light of the day in India.

According to media reports, the final PDP Bill, after incorporating the suggestions of the JPC is expected to be tabled in Parliament next year.

The information and broadcasting (I&B) ministry brought online news portals and OTT providers under its ambit as a measure to strengthen its authority over online news and content carried on OTT platforms.

As all digital media platforms, including news media and online curated content providers (OCCPs), would fall under the ministry, many fear that this could spell doom for India’s high-flying video OTT space.

Besides video streaming service providers and digital news platforms, other segments that come under the over-the-top (OTT) are podcasts and music streaming platforms such as Gaana, Spotify, HubHopper and Aawaz, essentially those accessible over the internet or ride on an operator’s network. Besides this, even digital news media will fall under the purview of the I&B, which has deeper ramifications on the state of the press in India and how freely journalism businesses can function.

At the same time, the advertising authority is looking to come up with new norms to curb misleading ads that are showcased on Indian television by online gaming and other digital entertainment platforms.