As Chinese Apps Get Banned, These Indian Alternatives Rise To Fill The Gap

As Chinese Apps Get Banned, These Indian Alternatives Rise To Fill The Gap In an aggressive step against China, the Indian government decides to ban 59 Chinese apps

Which are the Indian alternatives to these apps and which apps are in the lead among this pack?

With India and China locked in a border battle which has already seen plenty of casualties, the Indian government finally decided to take a stern step of banning 59 Chinese apps in India. While the ban covers a range of apps, short video app TikTok, file transfer app SHAREit, UC web browser, fashion platform Shein were among the most used apps in India.  This has given a big impetus to many Indian alternatives that are directly competing with the Chinese apps as well as global counterparts.

In a press release announcing the ban, the IT ministry stated that the government had received “many representations raising concerns from citizens regarding the security of data and risk to privacy relating to the operation of certain apps”. Some social media users are even calling it a “digital surgical strike” after the central government finally acted on the pleas of citizens, who have been calling for a complete boycott of Chinese products including manufactured goods as well as Chinese electronics brands.

Many of the apps included in the list are among the top-grossing apps on Apple’s App Store and Google Play Store. At least 15 of these Chinese apps have regularly featured on the top 50 lists on the Play Store.

Now that these applications are officially banned by the Indian government, users are looking for different apps with similar functionality. While many of the banned apps have direct Indian replacements, there are some categories where there are no Indian offerings, or the apps themselves don’t have a sizeable audience.

Given the high buzz around the ban, many Indian apps could come up as replacements in any of the below categories. 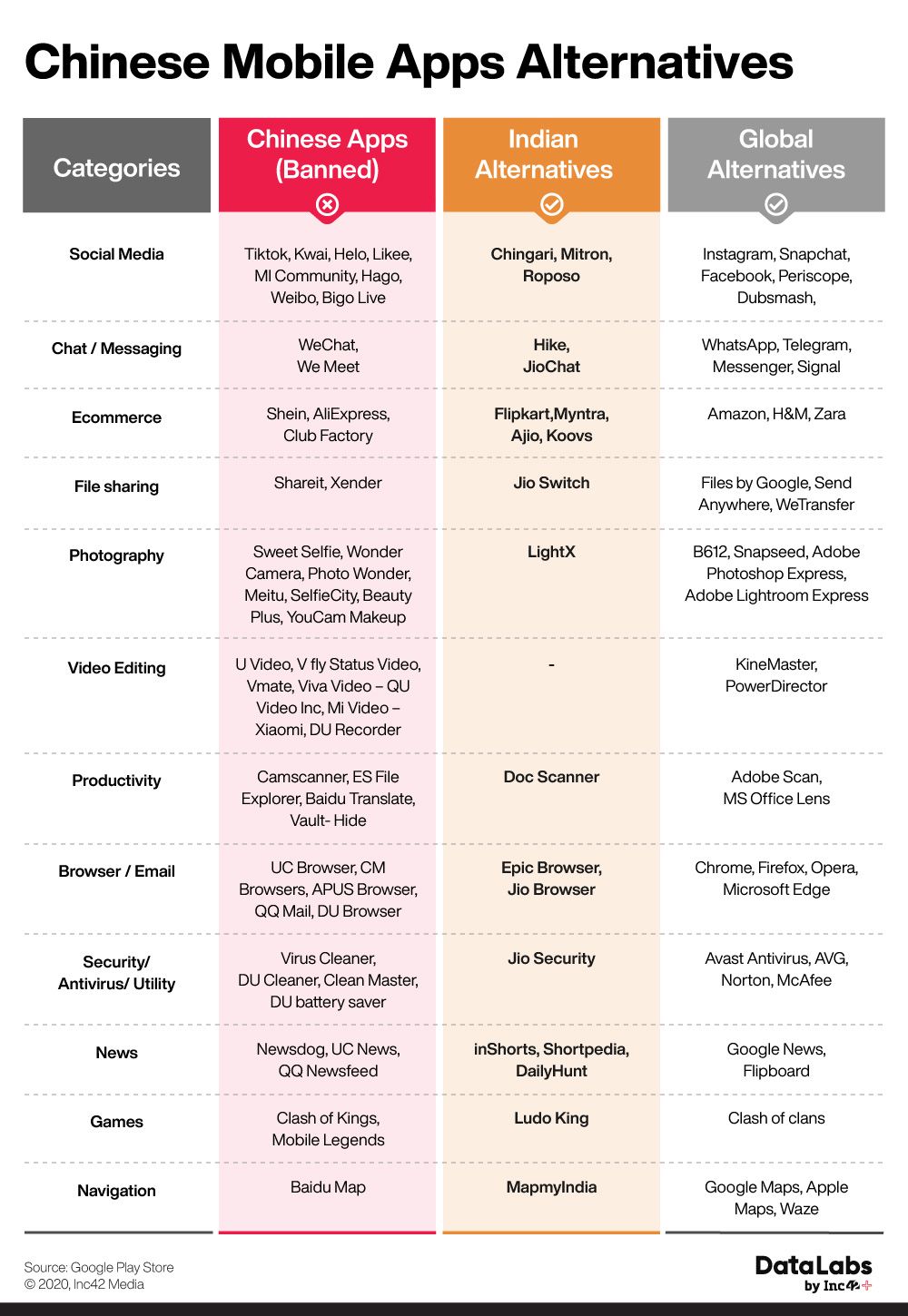 While TikTok has undoubtedly become a sensation among the Indian youth, with over 611 Mn downloads and over 200 Mn monthly active users, including several celebrities. Roposo is its Indian competitor with over 55 Mn downloads and 25 Mn monthly active users. Other Indian alternatives to TikTok include Mitron and Chingari. Thanks to the ban, Instagram and Chingari have seen many TikTok users migrate.

SHAREit, the popular file-sharing app has over 400 Mn downloads in India, with over 1.2 Bn worldwide. The app has 1.5 Mn daily active users (DAUs) from the country. Jio share is one of the Indian alternatives, though most of the primary competitors are international companies. It must be noted that ShareIT had an active involvement with the startup ecosystem in India. The company had acquired FastFilmz in May 2018.

Last year, SHAREit India CEO Karam Malhotra told Inc42 that India accounts for the apps’ largest user base among any other country in the world. “India is our largest market right now, with 40% of our user base coming from here. We initially focussed on product-market fit, and what we realized is we understand what people share. So we understand the apps they share, the games they share, the videos, images,” Malhotra told us.

Popular e-commerce apps like Shein and Club Factory, too are included in the list. These companies have a prominent share in the fashion ecommerce space in India, but have attracted plenty of controversy over the past year for allegedly importing orders into the country as gifts and avoiding customs duties.

Even before the ban, the downloads of several Chinese apps had started falling since the start of June, once the faceoff between the forces escalated. And now that an official ban has been announced on these apps, users are quickly adopting many of the Indian alternatives. 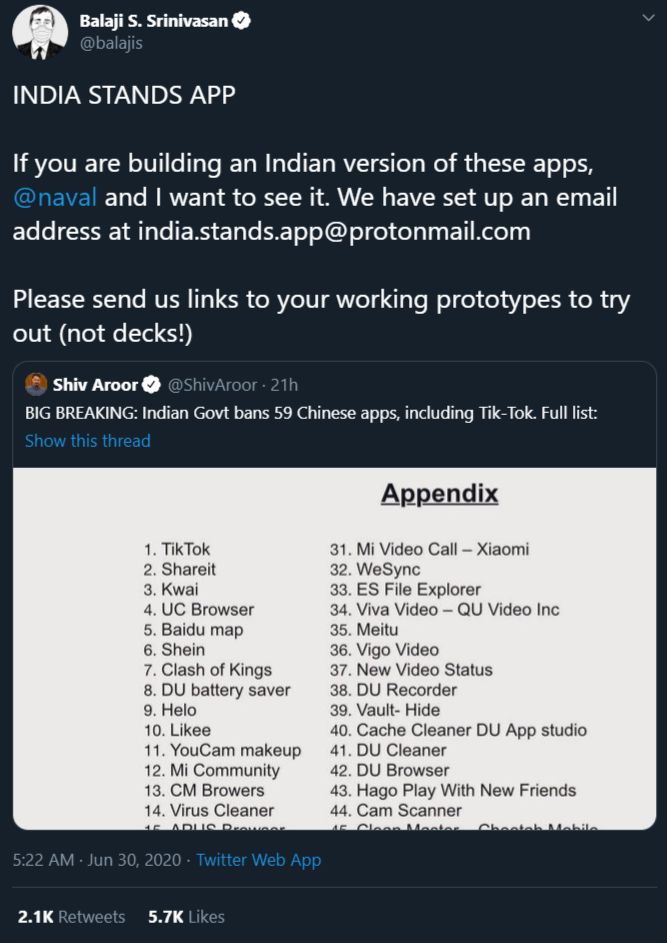 And now with the attention on Indian apps, even VCs and investors  — including Balaji S. Srinivasan and Prayank Swaroop —- are coming together in an effort to back competitive alternative apps for the Indian market, willing to fund the right app ideas. It must also be noted that India is a huge market in the overall global app economy. App store research firm AppFlyer’s State of App Marketing In India report in December 2019 pointed out that almost 41% of the top 200 applications downloaded in 2019 were Indian. Meanwhile, Chinese apps made up 38% of the list. Last year, Indian apps too were at 38%.

In total, Indians downloaded close to 6.5 Bn applications between the second quarter of 2018 to the third quarter of 2019. The report also highlighted at least 3.3 K apps had over 1K monthly non-organic users. The data sample also includes 7.8 Bn apps that were opened in the same time frame, along with 1.5 billion retargeting conversions.

The report highlighted that in 2019 the food and drink were the most popular domestic apps followed by shopping and travel. Will this big headstart combined with the larger call for ‘Vocal for Local’ and the ban on Chinese apps, can India’s app economy take over from China?