Agritech Startups On The New Models, Opportunities In The Wake Of The Farm Reform Bills

Agritech Startups On The New Models, Opportunities In The Wake Of The Farm Reform Bills On September 20, 2020, the government of India passed two of the three bills in the Parliament which emphasises on providing nation-wide market access to farmers, storing/hoarding of agri commodities and contract farming.

The farmer bills may not be entirely perfect, but it’s a welcome step nonetheless especially at a time when the economy is largely dependent on the agri sector to lead the revival, said Milk Mantra’s founder.

Startup needs to provide additional values to farmers so that they are not only self-sustained, but also have alternative sources of income, urges MeraKisan CEO

While India’s recent agriculture reform bills have attracted plenty of controversy and protests from farmers across the country, there’s undoubtedly a ray of hope that the market would open up and increase agriculture income at the bottom of the chain i.e. at the farm level.

Even as the bills — the Farmers’ Produce Trade and Commerce (Promotion and Facilitation) Bill, the Farmers (Empowerment and Protection) Agreement on Price Assurance and Farm Services Bill and the Essential Commodities (Amendment) Bill — await the final go-ahead from the President, there are questions about whether they will improve market access for farmers and whether it will tackle the problem of hoarding of agri commodities by large farmers to drive up prices and finally, the contract farming, which risks turning agriculture into a gig economy sector.

Specifically, the Farmers’ Produce Trade and Commerce (Promotion and Facilitation) Bill gives farmers the choice to supply directly to corporates, provided they maintain the required quality standards and consistency. And this particular bill is being seen by agritech and food supply chain startups as a gateway to increase market penetration and revamp their models.

Srikumar Misra, founder of diary-based, agri food venture Milk Mantra, said that the farmer bills may not be entirely perfect, but it’s a welcome step nonetheless especially at a time when the economy is largely dependent on the agri sector to lead the revival.

Other startups also had positive takeaways from the developments, but exercised caution in celebrating the bill before the impact on the ground is proven. “It is crucial to note that the idea is not to shut down APMCs, but to expand a farmer’s choices,” asserted Ashok Prasad, cofounder of Unnati, an agri-fintech based platform which aims to minimize the risks in farming for small and marginal farmers in the country.

Further, Puneet Sethi, cofounder at Farmpal, an agritech startup that connects farmers to businesses, said the reforms are the need of the hour and are probably the most significant steps in helping farmers increase their incomes. He added this would especially benefit the smaller farmers with marginal land holdings (1 to 5 hectare holding) that constitute over 75% of India’s farmers.

Typically, these small farmers are more distressed than larger farmers, as they have lower market access, limited ability to procure agri inputs (be it, seeds, fertiliser, pesticide, mechanisation etc.) and have lower yields, which does not give them leverage in the market. These factors are compounded with not being able to command the same say in the local APMC or traditional markets in terms of selling price. In most cases, their income gets compromised, pushing them into a cycle of debt. That is the current reality of most of the farmers in India.

“Farmers today have no alternative to the traditional madis; to an extent they can sell to state licensed agencies, but that process is very cumbersome given the regulatory process/paperwork involved,” added Sethi.

The End Of Middlemen In Agritech?

Industry experts also said that Indian farmers have faced the same challenges over decades; although there have been several policies, schemes in the past, these have served more to help the farmer post reality, rather than address the root cause of their problems. The bills have been called a step in the right direction to ‘free’ the farmer to make their own choices via a free market and a more transparent process. 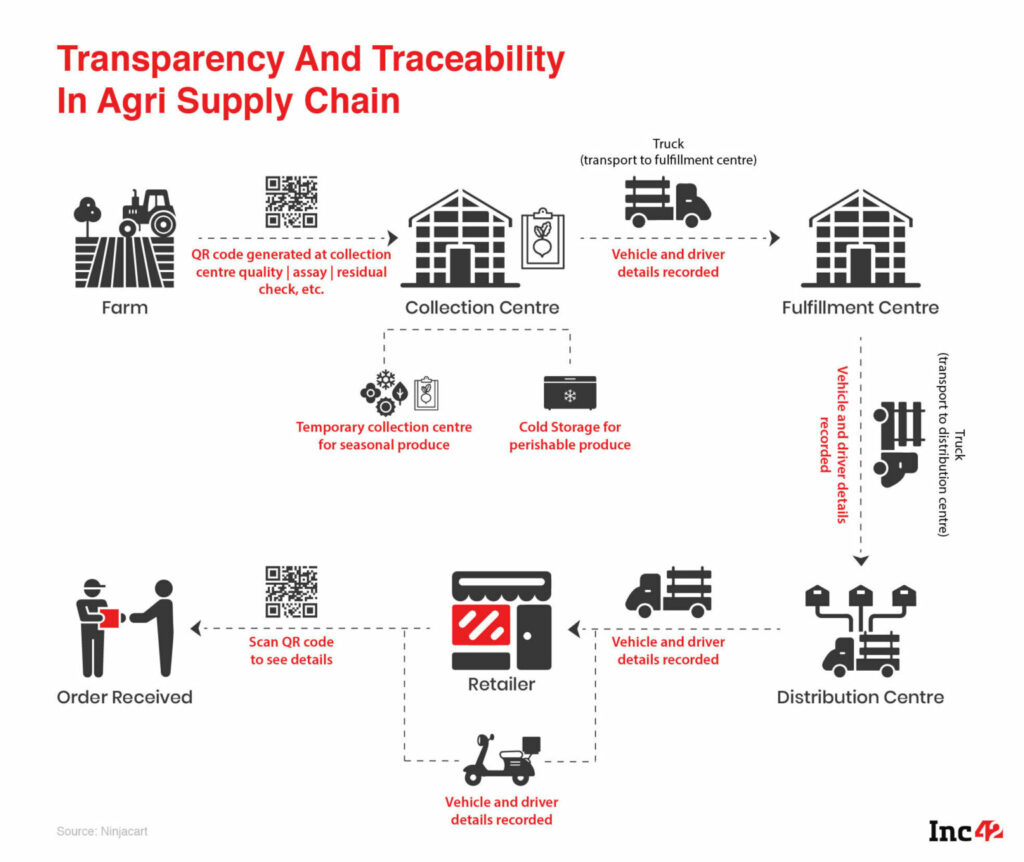 Agri10x’s cofounder and CEO Pankajj Ghode also said that these bills will further help eliminate intermediaries, reduce exploitation of farmers and give them a chance to explore other lucrative markets. It will essentially create an effective farmer ecosystem backed by technology, thereby creating a balanced and systematic market, which will ultimately benefit both the sellers as well as buyers. Pune-based next-gen, agritech startup Agri10x is artificial intelligence and blockchain-enabled global e-marketplace that connects farmers with traders.

The Grey Areas In The Agri Reform Bills

While a large majority of the startup founders and industry experts that we spoke to have a positive outlook on the agri farm bills, some believe that there will likely be logistical challenges in the short term. Other challenges include the awareness and understanding of the bills on a farmer-level and the implications and impact on how farms operate.

On the surface, the farm bills may look beneficial for all the farmers. However, industry experts suggested that the small and marginal farmers have to come together and trade their produce for better price, along with the support from startups, agencies and NGOs in order to make these bills work for farmers. This is the only way forward for farmers to make the bills work, and we are already seeing some of these trends happening across the country.

In other words, more and more smaller farmers need to come together as farmer producer organisations (FPOs) or cooperatives to realise the real benefits from scale. Once this is established, these new bills should ideally accelerate this process, as higher incomes become feasible by selling outside the mandis or even within the mandis at higher volumes, suggested industry experts.

However, there still exists a grey area, which might require close monitoring by the authorities so that farmers can trust private entities with fair pricing and at most transparency, thereby making sure not to create ‘more middlemen’ in the process, where farmers have already been exploited, for decades.

Small and marginal farmers are likely to benefit the most from the bill as they had no say earlier in the way they sold their produce. By reducing the marketing and transportation costs, smaller farmers can get better prices for their produce, in theory.

Hyderabad-based hydroponics startup UrbanKisaan’s cofounder and CEO Vihari Kanukollu believes that the quality of farming will improve drastically. Since farmers can deal with the buyers directly, they will be able to identify crops with better value and draw more profits. “There will be a good competition for partner’s produce and the value will be directly transferred to farmers,” he added, pointing at how agriculture extension departments and startups can help farmers fill up technology gaps, facilitating them to take up new crops for farming.

Backing this assertion, Anu Meena, founder of Agrowave, a farm-to-market mobility supply chain startup, said, “There is no doubt that these bills will bring about structural changes in the agri value chain, But, it needs to be implemented correctly.” Agrowave offers an integrated network on mobile pickup stations (MPS) at farm-gates to small and marginal farmers — in particular such models have been liberalised by the bills.

Awareness of the bill is a major hurdle though. Therefore, the impact may take some more time to reach them  especially for the farmers who are more remote and at a distance from urban centers.

“Honestly, I think most of the small and marginal farmers might not be aware of the bills in the first place,” said Prashanth Patil, founder & CEO of MeraKisan, Pune-based agritech startup that works closely with organic farmers and farmer producer organisations, where it claims to offer certified, nutritious and healthy organic food.

He cautioned that it’s not even day zero. While there will be competition there will be a lot of cooperation since players will gain from working together in the early days in shaping up the market.

MeraKisan’s Patil, on the other hand, said that technology innovations might sound fascinating, but the right question one needs to ask here is, how can we make farming simple rather than complex. “At the end of the day, farmers lead a simple life, and as a startup what we need to do is, create additional values so that they are not only self-sustained, but also have alternative sources of income.”

Currently, agritech startups such as MeraKisan, Unnati, Farmpal, UrbanKisaan, Agrowave, INI Farms, Milk Mantra, Agri10x among others are already working with the farmers on the ground, and some of the aspect does not change with the agri reform bills. However, what the bigger agri startups, especially those in the post-harvest supply chain — which are engaged in agri marketing or providing cold chains or storage solutions —  these startups now have a lower regulatory compliance burden and fewer processes to follow in terms of working with farmers.

Industry experts said that earlier, transacting with the farmers was limited to state boundaries, but now the startups can source and work with farmers from anywhere in India. In that sense, additional outreach by these companies, increased farmer connect will result in benefits to the farmer: more awareness of the opportunities in the short term and income growth support in the long run.

Furthermore, it is said that there will be a lot more interest and investment from the private sector in the agri industry especially as contract farming gains popularity. Agritech models related to agri marketplaces (for produce, inputs and equipment) farm mechanisation; cold chain and storage solutions, farm advisory, legalities and contracts; predictive analytics for pricing and produce, farm-to-fork supply, tech-enabled logistics and supply chain optimisation will see greater adoption.

Even before these bills, the interest in agri tech, during Covid-19 times has been high with a lot of activity both in terms of competition in the space and investments, said Farmpal’s Sethi, “Specifically, now though, we think the competition will be higher as lot of the bigger players from the private sector are expected to take advantage of these new bills both by improved access to farmer, contract farming framework and potential of storing certain agri commodities all of which are not highly perishable.”

In addition to this, industry experts also said that players with deep pockets such as Cargill, Kroger, Walmart, Costco, Reliance Retail would definitely seek to benefit their business operations through investments in cold chain storage solutions and setting up of distribution centres; further identifying and tying up high volume producing farmers to have first access to produce and more.

In terms of technology innovations, Milk Mantra’s Misra, who is part of the NITI Aayog team working on a potential agritech stack for India, said structuring of data and ways to use it can play a transformative role in the sector and there are key areas like blockchain, AI-driven supply management, farmer information systems and others, that startups can really make a difference in.

“Agriculture is an important industry now and agri startups can play a pivotal role in helping farmers ease the burden on them by digitising the entire supply chain with new age technologies such as AI, blockchain etc and help farmers with price transparency,” shared Misra.