Investors and VCs had cautioned about the reckless spending to hire, scale up and bemoaned the lack of focus on retention through culture and profitability even amid the funding boom in 2021

More than 1,700 startup employees have been impacted in the latest round of cutbacks at Trell, Unacademy, Meesho, Furlenco and other startups

It’s not the apocalypse, but it sure feels like that for many startup employees in early 2022. The first quarter of 2022 was supposed to be when startups capitalised on the momentum of the past two years, but somehow the bubble has burst and it’s the employees caught in the fallout as ever.

Over 1,700 startup employees have been impacted in the latest round of cutbacks at startups such as OkCredit, Unacademy, Trell, Furlenco, Lido, Better.com (India) among other tech companies, based on just the headlines above. As the new quarter began, Unacademy announced that it had laid off 600 employees after already cutting over 325 part-time workers and educators from its rolls, while ecommerce unicorn Meesho fired 150 employees, seven months after last raising funds.

From layoffs to talent looking to jump ships due to internal power struggle to cost-cutting and forced terminations — it may not be clear yet, but we are on the way down to a trough after the peak of 2021. Perhaps, it may not be reflected in the overall funding, which has crossed $11.3 Bn in the penultimate week of March, but it is certainly becoming apparent in how startups are trimming the fat, getting leaner and generally looking for profits. Funding too will slow down according to several investors we spoke to, as they look to add caution to their deal-making. 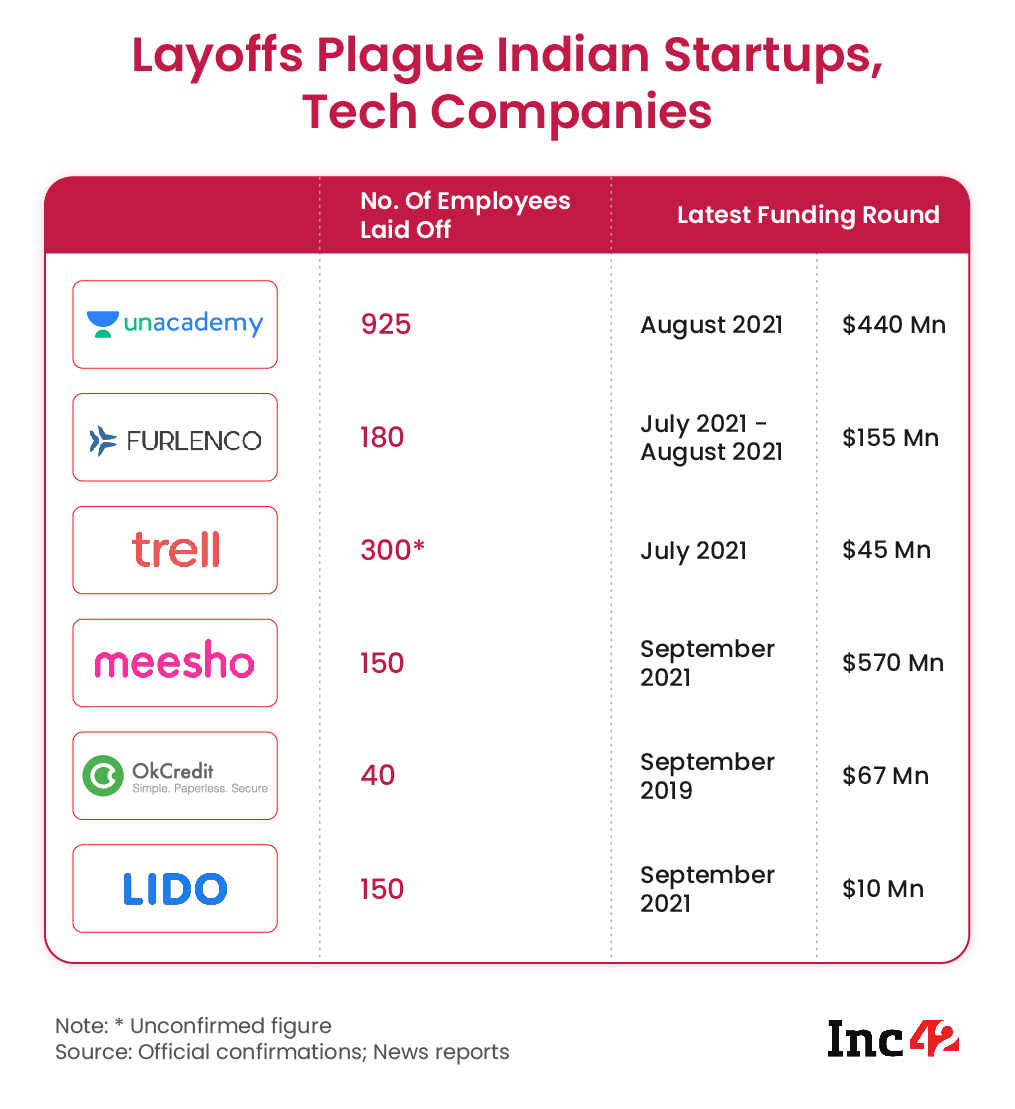 There are several factors at play here. From startups going lean and cutting back on spending to investors piling on the pressure to extract profits and returns from their ageing portfolios. After the experiments for scaling up and growth in 2020 and 2021, the focus is now on sustainability.

The primary factor being put forth is Investor pressure on the profitability front and exit paths in many of the older startups.

But as one Bengaluru-based VC told us, “Investors are not operators. They are putting in money at a high valuation, so naturally there will be some pressure on the operators themselves to deliver the results.”

In other cases, businesses and verticals that are not really moving the needle are being trimmed out as many startups continue to harbour public listing ambitions even in this bearish climate. The same investor added, “We see startups raising funds, having millions in the bank and then looking to diversify their revenue. While they may be confident about their business model and prospects, the reality is not always in line with this expectation.”

Even companies that have hit the public markets need to tighten up as shareholders question revenue growth. As foreign institutional investor interest in new-age tech stocks wanes amid global factors, experts have long felt that the trickle-down effect will hurt larger loss-making startups as well as growth-stage ventures.

“After the sharp correction in Nasdaq, many of the world’s largest technology companies are looking attractive on valuations. Given the choices, these foreign investors would prefer to invest in some of the leading tech stocks in the US,” Suresh Shukla, joint president, Kotak Securities, told Inc42 earlier this year, adding that this is likely to make public market bets in India less attractive and startup investments riskier, particularly given the slow and unclear to path to profitability.

Investors will focus heavily on leaner unit economics when taking decisions and dealmaking is expected to be slow and protracted. And unlike the torrential pour of unicorns we saw last year, there will be rationalisation in private valuations too.

Startup Layoffs After The Funding Boom

What particularly pinches is that the downsizing has come after two years of ramping up of hiring, as startups wanted to scale up and grow amid the pandemic. Even as startups adopted remote workplaces and broke up parts of their operations to accommodate lockdowns, the boom in digital adoption and traction for tech products across sectors meant several startups had hired aggressively in the market. This was most evident in the talent wars that had broken out among key players in each sector.

Unsurprisingly, the spurt in hiring in 2021 was due to the higher influx of funding. Those startups which raised funds from VCs were in a great position to offer higher pay and therefore rule the job market, but this does not guarantee profits and is not an indicator of sustainable growth.

“Look, all companies want to go for automation. It is the fastest way to scale up. We have coders writing code for no-code products and platforms. So coders are helping automate their own work in a way. Wherever a company can automate operations, it will do so, since it makes business sense,” according to 3one4 Capital’s Siddarth Pai.

Startup ESOP buybacks became a norm and perks were par for the course last year. More than 30 startups have announced ESOP buybacks and created in the past two years — over $335 Mn in wealth generated for employees in 2021, and $83 Mn in the first quarter of 2022. But ESOPs were just one part of the equation, the other being high salaries and bonuses for retention — this profligacy is today becoming a huge burden to bear for many companies.

In a way, investors and VCs had cautioned about the reckless scaling up towards the tail end of 2021. As global financial markets displayed signs of slowdown, there were questions about unsustainable and spread-out business models, and the impact it would have on the human capital in the long run. A startup ecosystem where layoffs and cutbacks are so frequent and predictable indicates a deeper systemic issue.

One issue is the lack of talent on the tech front, which has fueled the talent wars. Other areas where automation has taken over include customer-facing roles and marketing. For instance, Furlenco laid off around 180 employees to push for automation in its customer support operations. The company now uses Haptik’s automated customer support platform and chatbots to solve queries. Whether this will help it retain customers is another matter altogether.

It’s not a coincidence that most of these layoffs are coming towards the end of the financial year in March. The resultant savings from these layoffs and cutbacks will be directly reflected in the P&L statement, but whether this will be enough in the case of large businesses like Unacademy, Trell and Furlenco is yet to be determined.

For instance, Trell reported a loss of INR 78.4 Cr in FY21 (last March), but since then despite raising $45 Mn (INR 339 Cr) in July 2021, it is struggling to retain its full workforce. The problems are similar for startups such as Unacademy, Lido and Furlenco, which are also cutting back after raising funds.

Like other layoffs, it’s not just about simply tweaking the numbers; the real impact is on the people. Unacademy has let go of over 600 employees across functions in two rounds of layoffs. That’s enough to populate dozens of early-stage startups and maybe a handful of growth-stage ones too. And this after the company’s massive acquisition spree in the past couple of years. The Gaurav Munjal-led edtech unicorn gobbled up competition and other edtech startups, while also claiming that it would focus on unit economics.

As a result, Unacademy has its hands in many pies and is only now addressing the bloat — among other steps, it is said to be winding down its K-12 edtech business and focus purely on test prep, certification, counselling and cohort-based learning. Will BYJU’S swoop in and poach the talent leaving Unacademy. Given BYJU’S current focus on expanding offline learning, that may very well be the case.

Growth At Any Cost?

Entering and burning cash on new verticals is great when there are profits to bank on, but at this time, it feels like experiments to see what might work. Growth and scale-focussed businesses may indeed be built on hiring and firing employees every other year, but it’s not going to deliver sustainable results. Job stability is a key factor in employee engagement to the vision and their productivity, according to a 2019 study.

What might be the fate of employees at companies like Blinkit, Vogo, YoloBus and others that are going through lean patches and are targets of distress sales or mergers?

Blinkit, in particular, will feel a lot of revenue pressure in the house of publicly-listed Zomato, and it is competing in a sector that will require cash burn too. Will Zomato have the wherewithal to carry Blinkit’s employees as well as its own if and when the merger goes through? There are already reports about Blinkit laying off employees and delaying vendor payments.

Whether it is Blinkit, Zomato, Furlenco, Trell or Unacademy — the problem is not about layoffs, but about growth at any cost. Having espoused this philosophy for nearly a decade, these companies are realising that there’s only so much that ‘move fast and break things’ can achieve. After a while, Facebook needs to slow down and focus on profits.

It is another reminder that scaling up a business may indeed be possible through acquisition and burning cash, but profitability is a different beast altogether and now even unicorns are having a tough time taming it.