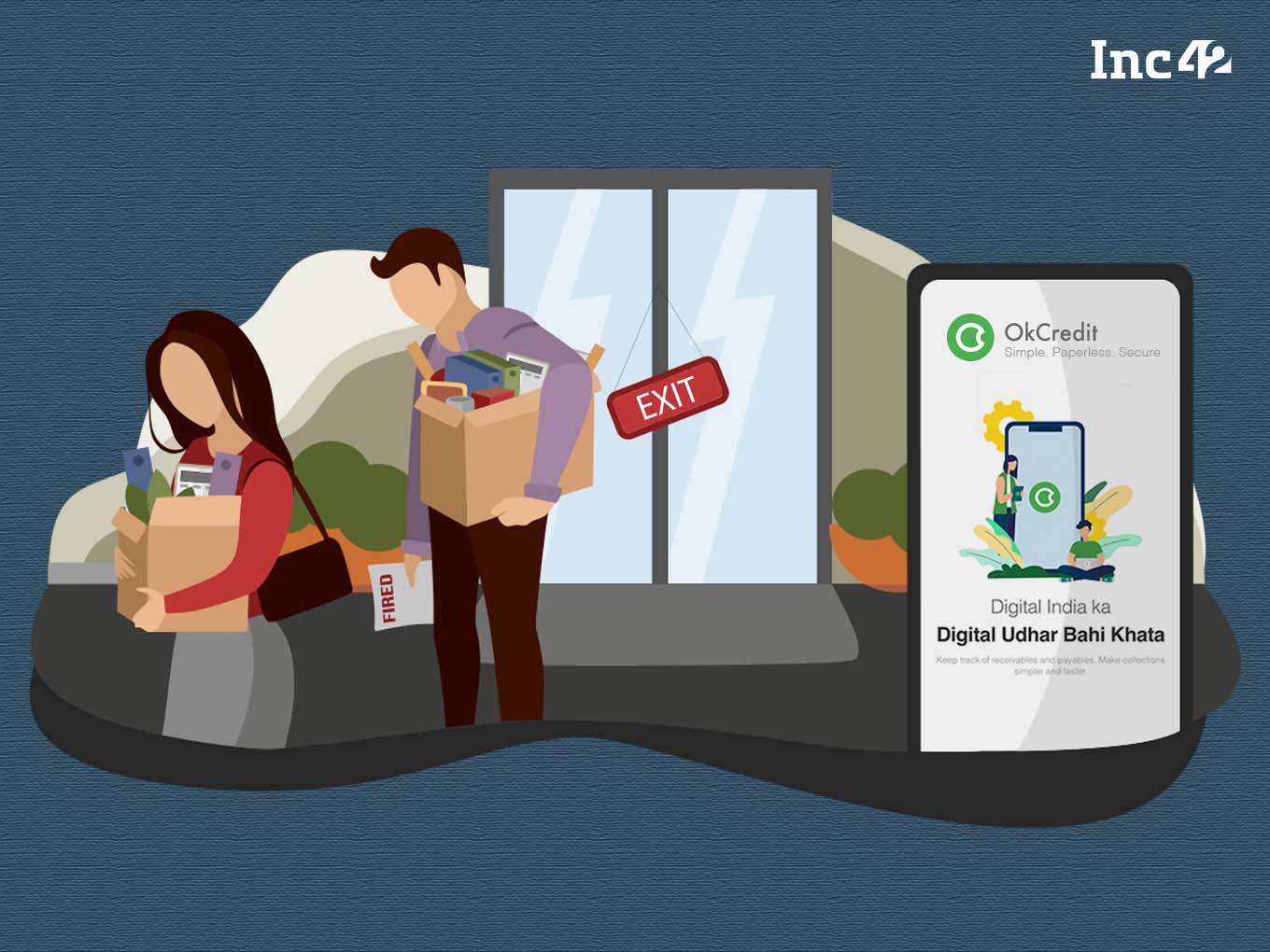 OkCredit, in August 2020 had launched an ecommerce enabler app – OkShop, which garnered a little more than 5 Lakh downloads in Google’s play store

After hitting the US private market, the signs of a bear market are prominent now in the Indian startup ecosystem with layoffs, downrounds, and more. It started with edtech startup Lido, and now it is Bengaluru-based bookkeeping startup OkCredit that has laid off employees.

People aware of the development have informed Inc42 that the startup has laid off around 30-40 employees in the past month. We have been told that most of these layoffs were from the backend, tech and engineering teams.

OkCredit confirmed that there have been layoffs without specifying the number of employees impacted. However, the startup claimed that the employees are being supported by outplacement services, and extended medical insurances. The Lightspeed-backed startup further mentioned that moving ahead it will focus on fintech initiatives and strengthen its growth channels.

Started in April 2017 by Aditya Prasad, Gaurav Kumar and Harsh Pokharna, OkCredit is a mobile-based solution startup for small business owners and their customers. It helps them in recording credit/payment transactions digitally all across the country, thereby adding the ability to provide on-demand visibility of the merchant’s record to the customers.

The startup is backed by marquee investors such as US-based hedge fund Tiger Global and Lightspeed India, YCombinator and Morningside Venture. To date, the startup has raised $84.2 Mn.

OkCredit, whose core business was bookkeeping for merchants, in August 2020, had launched an ecommerce enabler app – OkShop. The platform claims to help merchants sell their product online by creating an online shop.

In its almost two year run, the platform, as per Google’s play store has been downloaded for more than 5 Lakh times.

Another major reason behind such layoffs can be attributed to OkCredits’ poor financial performance.

In FY21, the startup spent INR 114.6 Cr, to earn mere INR 3.79 Lakh in sales revenue. What is interesting to highlight is that out of the total expenses, OkCredit has spent almost 38.4% on employee benefits. Employee benefit expenses mostly comprise of salaries of employees, gratuity, PF contribution and other employee welfare expenses. The employee benefit expense is 1161X of the revenue from sales it witnessed in FY21.

The Lightspeed-backed startup clocked a loss after tax of INR 108.7 Cr in FY21.

OkCredit, which claims to be Digital India ka Digital Udhar Bahi Khata on its website, offers multiple language support, collection reminders, reports and account statements on its platform. The startup on its website claims that it is operational across 2,800 cities, with more than 100 Mn downloads.

It competes against the likes of Khatabook, Pagarbook — who also had poor FY21 performances. While YC-backed Khatabook spent INR 108 Cr to earn INR 19.1 Cr in FY21 with a loss of INR 32.5 Cr, Pagarbook had spent INR 93.5 Cr to earn a mere INR 10.6 Lakhs from sales in the same financial year.

OkCredit, Khatabook not only face a stiff competition from upcoming peers such as Chqbook, and Vyapar, but are also facing a heat from unicorn fintech startups such as BharatPe and Phonepe who already have a record merchant on their platforms and is easier easy to sell additional services such as bookkeeping products.

The development at OkCredit was first reported by news portal Entrackr. The information has surfaced almost two days after Inc42 reported about 150 employee layoffs in Ronnie Screwvala-backed edtech startup Lido.

Lido, which had raised $10 Mn from Screwvala-backed Unilazer in September last year and is backed by noted angel investors such as Anupam Mittal, Vijay Shekar Sharma, and Mukesh Bansal, failed to secure another round of funding leading to heavy layoffs mostly from the sales team. Sources informed us that the startup is eyeing acquisition, in case it fails to secure a new round of funding to sail through.