According to an Inc42 source, the company is in talks for a new funding round or possible acquisition

To date, the startup has raised close to $24 Mn in funding, of which $10 Mn was raised in September last year

“We were not given any notice and were asked not to work from the next day. There will be a gap on our resume. Who will take the blame for it?,” a Lido employee on condition of anonymity questioned.

At a time when the Indian edtech sector is flushed with funds, Mumbai-based edtech startup, Lido Learning, is facing financial constraints to run its day-to-day operations.

According to several employees, in a virtual town hall that took place earlier this month, Lido Learning’s founder, Sahil Sheth, informed the team that the startup is facing financial difficulties and will be unable to pay the salaries of employees for the month of January and the first week of February. The company has also laid off over 150-200 employees, a few employees confirmed to Inc42.

It’s important to note that the edtech startup had raised $10 Mn (INR 75 Cr approx) in September 2021 from Ronnie Screwvala’s Unilazer Ventures. According to an Inc42 source, the company is in talks for a new funding round or possible acquisition.

Inc42 has been investigating Lido for the last seven days in regards to these recent developments. About 10 employees confirmed the current state of affairs at Lido with Inc42 on a condition of anonymity. Our messages and call to the company went unanswered last week and we are yet to receive any response from the company on the detailed questionnaire sent earlier today to Lido founder Sahil Sheth.

According to Lido’s employees, while the company has assured that the pending salaries will be paid within “30 to 90 days”, however, according to employees, it looks unlikely, given the company’s current financial health. A LinkedIn post by a former employee who worked at the company till November 2021 highlighted that unpaid or irregular salaries were not uncommon at Lido. 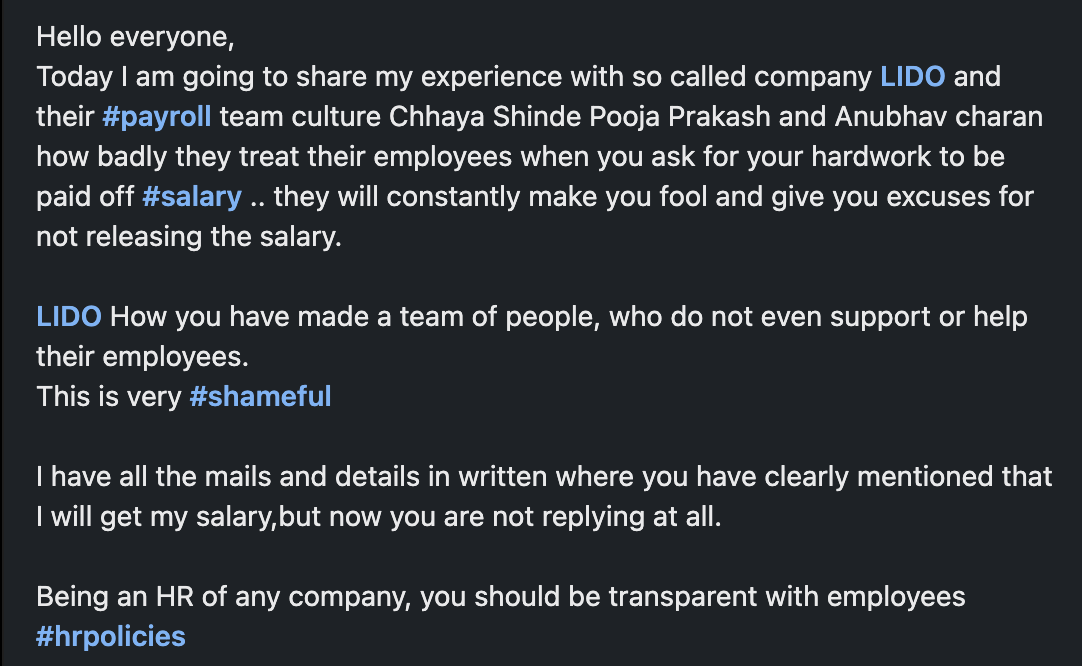 A similar post by Supreme Court lawyer Nitish Banka highlighted that besides the employees, even the teachers’ salaries have not been paid out either. 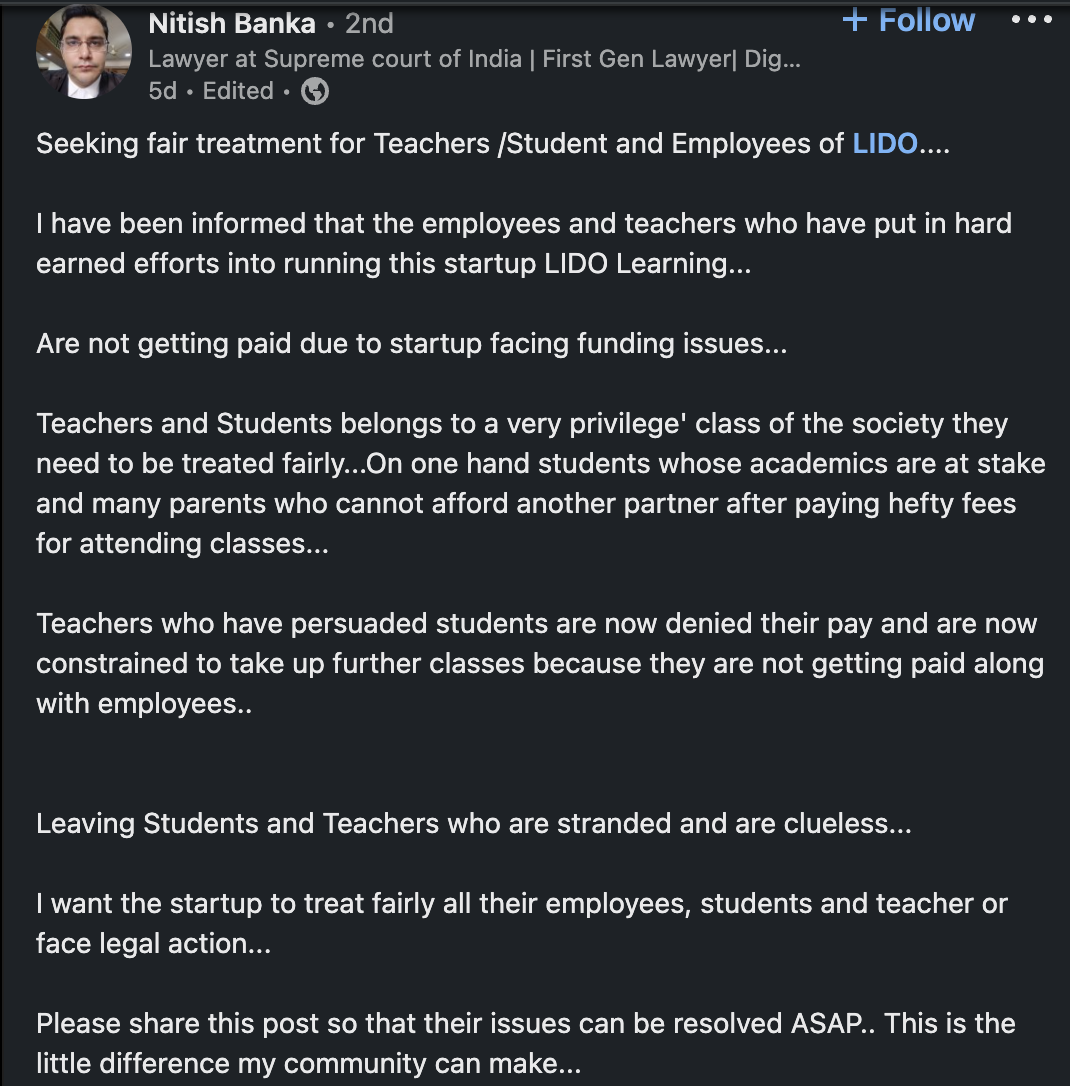 In an mail sent to teachers associated with Lido Learning, the edtech startup accepted that the company was facing financial difficulties and that their payments will be cleared in the next 90 days. Inc42 has learnt that most of Lido’s teachers who work on a contractual basis were credited 20% of their salaries last week. 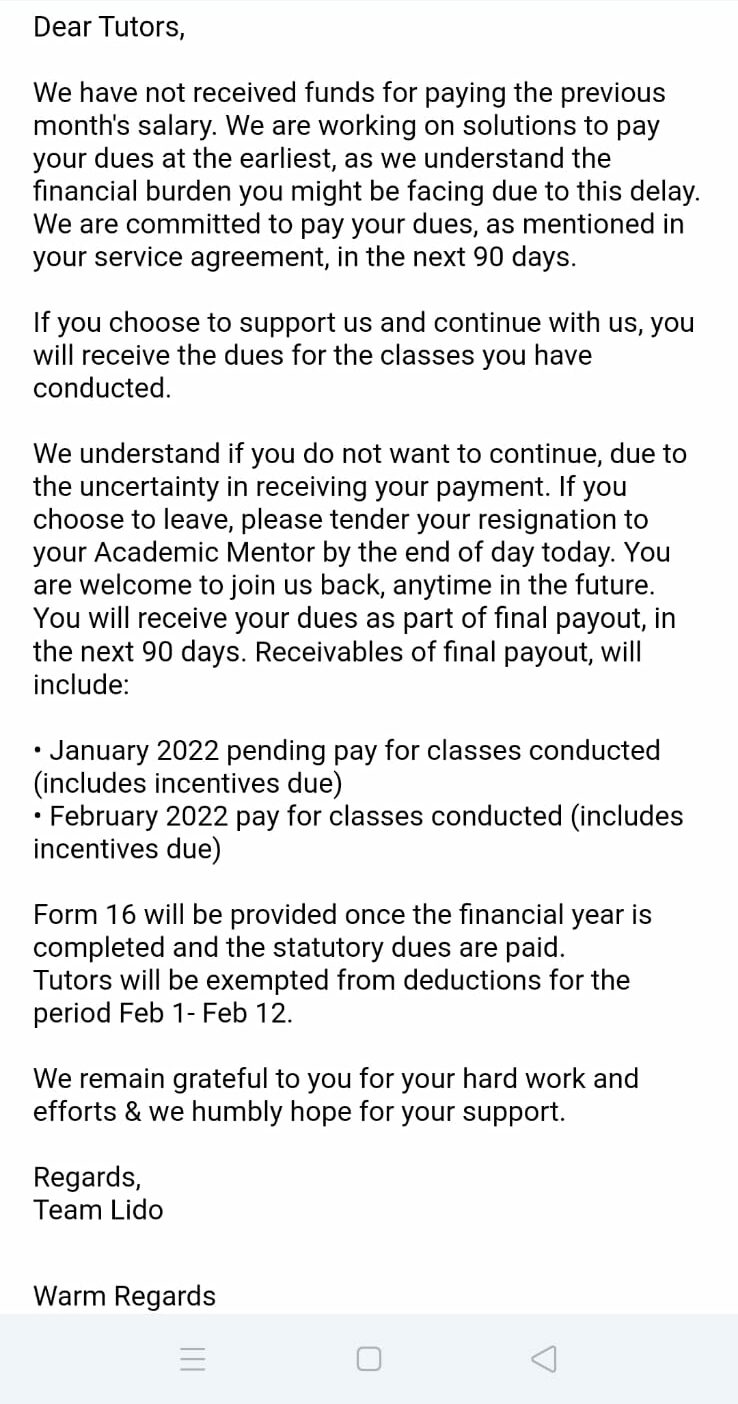 We also tried to book a free class on Lido for February 15, 2022. While the class started with a promotional video, however, no teacher was assigned throughout the session – highlighting the operational challenges with the company.

According to a few Lido employees, the company has already asked team members to look out for job opportunities.

“People who have gotten better opportunities have resigned, remaining have either put down their papers or are on a sabbatical period,” a current employee told Inc42 on the condition of anonymity.

He added that though their immediate managers are helping them get a job, no such efforts have been shown by the senior management of the company. “It is easier for CXO level executives to get a job as they have worked so long and have so many connections and referrals. But for people like me, it is starting from scratch,” the employee said.

One of the employees further claimed that Lido was allegedly deducting PF (Provident Fund) amounts from employees’ salaries but hasn’t been depositing the same into the employees’ PF accounts. Inc42 was able to partially verify this claim – Lido had last deposited employee PF in August 2021.

Another employee claimed that Sheth had mentioned that one of the investors had backed out after committing an investment. A tech team member further claimed that though they had halted their operations after the town hall, however, the company resumed back its operations within two days. He further added that the startup is in talks for bigger funding or a possible merger.

Inc42 has further learnt from multiple social media posts that employees who have parted their way with Lido last year were yet to receive their salaries.

Started in 2019 by Sheth, Lido Learning offers small-group online tutoring to the K-12 segment. It coaches students in subjects including Maths, Science, Coding, and English. The startup claims that its curriculum has been designed by experts from Stanford, Harvard, and IITs. Plus, its classes have just six students in a class, and it uses a combination of AI, an immersive curriculum, and gamification to ensure success for every child.

The startup also claimed its ACE program offered improved test results within just eight months of classes. According to its website, its subscription costs between INR 50K and INR 90K.

Since its launch, Lido Learning has raised close to $24 Mn in funding. It counts BAce Capital, Picus Capital, angel investors such as Anupam Mittal, Mensa Brands’ Ananth Naryanan, and JK Tyres’ MD Vikrampati Singhania, among others, as its investors.

Another Casualty Of Tightened FDI?

It is to be noted that Lido Learning is backed by Chinese investor BAce Capital. In early 2020 the government of India made it mandatory to seek approval for investments from countries that share land borders with India to curb opportunistic takeovers of domestic firms following the COVID-19 pandemic. This means Chinese investors have to seek approval from the Indian government before placing their bet in Indian businesses.

This has led to the exit of several Chinese investors among the Indian startups. One such example is Fosun International, which has sold the majority of its stake from the IPO-bound ixigo to GIC & Invesco. As per media reports, Fosun has already diluted 1.32% of stake from 3.8% stake in IPO-bound Delhivery.

One of the key reasons behind the difficulty in running Lido could be attributed to its business model as well as the rising competition in the edtech sector. Nearly $4.7 Bn was raised by edtech startups in 2021, while the top 3-4 players took away the major portion of the funding, still, several growth to early stage startups building similar products or catering to similar audiences had grabbed funding leading to massive competition.

While competition is one part, the problem of refunds has been plaguing edtech startups for quite some time now. In the past too, several companies were called up for refund issues. Lido’s case is not different here. Social media platforms are piling up with grievances of Lido customers seeking refunds. According to its website, Lido Learning claims to offer a complete refund of the course if a student cancels the subscription within 15 days. 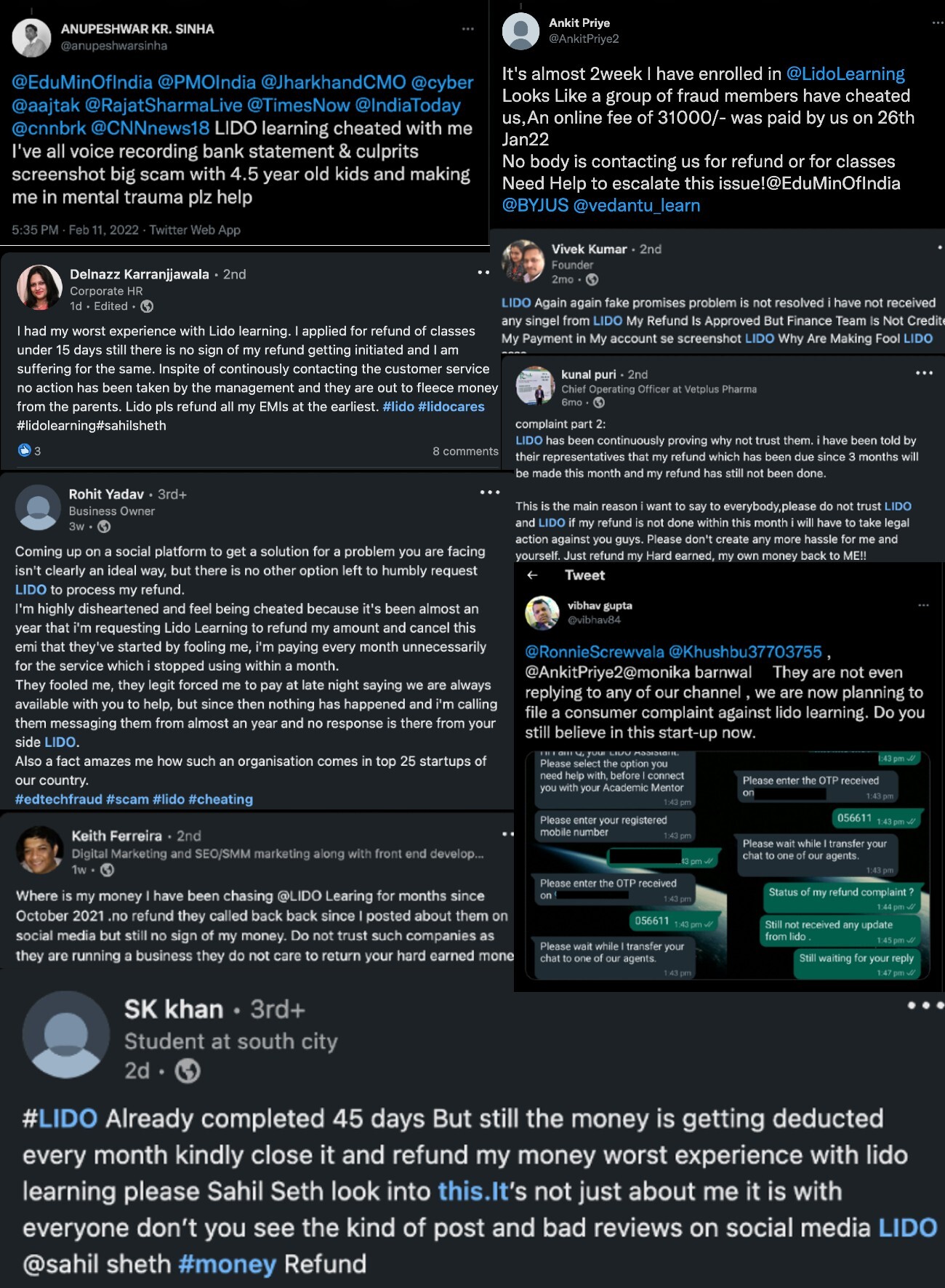 If we look at overall numbers, over the two years (FY20 & FY21), the company recorded losses of nearly INR 102 Cr, and the total funding raised during that time stood at around INR 111 Cr. ($14.8 Mn). While, the $10 Mn funding which it raised in FY22 helped it stay afloat for some time, however, lack of investor interest in the venture and an inability to secure further funding, could have made it difficult for the company to sustain itself financially.

Inc42 had tried to reach out to Sheth via calls and text messages. The story will be updated to include his statement.