Things are coming almost full circle for BYJU’S. The edtech giant started off as an offline coaching centre for students before jumping into online learning and becoming one of India’s most valuable startups. Now, the company is going back to its roots in a manner of speaking with the launch of BYJU’S Tuition Centre (BTC), its first real foray into blended or hybrid learning.

Developed for students in grades 4-10, BYJU’S Tuition Centre has been in the works for over 18 months, chief operating officer Mrinal Mohit told Inc42. The business will be led by Himanshu Bajaj who joined the company in December from consulting giant Kearney.

The company’s acquisition of coaching centre giant Aakash Educational Services last year for an eye-popping $1 Bn has also played a role in the rapid scale-up of BYJU’S Tuition Centre in the past few months.

BYJU’S will invest up to $200 Mn to build and expand BTC over the next 12 to 18 months. Its is targeting to sign up 1 Mn students over the next two years through this hybrid model which combines high-tech classrooms with its existing online learning modules. Each such classroom has the capacity to accommodate 2,000 to 4,000 students, according to Bajaj, which allows the company to scale-up rapidly.

The edtech giant has been running the product as a pilot in 23 cities across 80 centres and expects to take this to 500 centres across 200 cities by the end of the year. It also said this network of coaching centres will provide employment to more than 10,000 individuals in the first year alone.

The plans for offline classes were first reported by Inc42 in October last year. Mohit confirmed that to start with, they will be held for mathematics and science (biology, chemistry, and physics), but they could be extended for test prep and other courses such as coding or music too. For now, the focus is squarely on school-level curriculum, but more course modules could be added in the future. 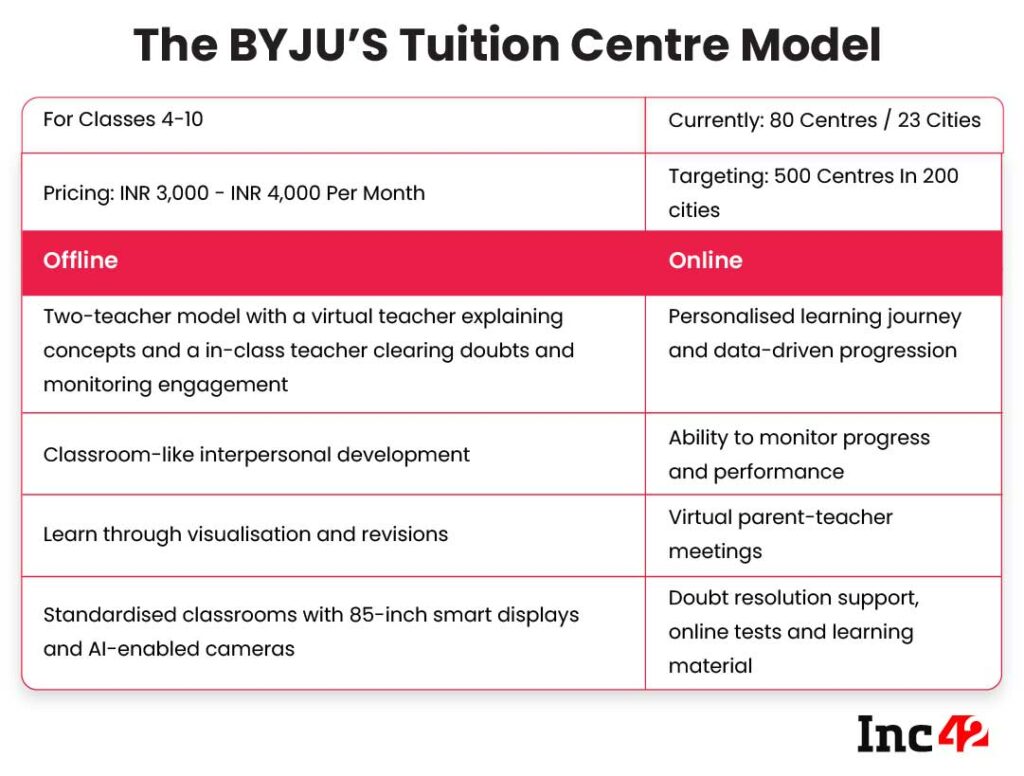 Mohit said that over the years, BYJU’S has built and expanded its portfolio of products and services as and when the market has demanded it. For instance, it started off with offline classes but as internet and smartphone penetration was growing, it launched recorded classes for self-learning as well as live classes in 1:1, 1:20 formats.

BTC is for those users, students or parents who feel that they need that physical intervention, which is not possible in an online-only platform. As we had seen in our look at the future of blended learning, there are three broad models that companies are following.

Of these, BYJU’S has opted for a mix of the second and third model. While edtech increases convenience of learning, there’s still the problem of the digital divide and lack of engagement. Student-teacher interaction is crucial for higher-order thinking skills, grasping concepts, soft and social skill development and more. Blended or hybrid learning offers the best of both worlds, and goes a long way towards bridging critical issues like the digital divide.

The model is centred around tech-enabled physical tuition centres and a two-teacher model. The broad concepts are taught by a virtual teacher through a large 85-inch display for content. The content is similar to the existing modules on BYJU’S but customised according to cohorts and learning progression. The in-classroom teacher meanwhile will focus their attention on clearing doubts, monitoring engagement, reinforcement and more.

The classrooms are also equipped with smart cameras that BYJU’S claims will be used to analyse the behaviour of learners, map their engagement levels throughout a session and personalise the pedagogy and create learning cohorts.

The other thing that works in favour of hybrid learning is the relatively kinder learning curve for teachers and faculty. But for BTC, Bajaj said the company has hired a new batch of educators. Many engineers and other graduates are being hired from National Institute of Technology (NIT) and IITs, before being trained and certified to become teachers.

Under the BYJU’S Tuition Centre product, the offline classes will be supplemented by online learning, similar to what the edtech platform offers currently for the K-12 segment. Data is what brings these online and offline experiences together and adds an element of personalisation that sets BTC apart from other coaching classes, according to Mohit.

Some of the classes will happen in the centre, some will be taken online, but he claims the experience is created in such a way that it’s an integrated journey for a student.

“The data from both experiences will help us figure out the areas that students are strong in and where they need work. This includes the kind of pre-class work and homework for the students, and direction for one-on-one interactions with teachers; all of this will start getting personalised based on that data.”

Students are grouped according to their proficiency and content for each class is preset by a central team, with certain degree of autonomy for the teacher in the classroom, depending on what concepts are being taught.

When BYJU’s acquired Aakash, cofounder Byju Raveendran had said, “The future of learning is hybrid and this (BYJU’s and Aakash) union will bring together the best of offline and online learning, as we combine our expertise to create impactful experiences for students.”

While Aakash and BYJU’S Tuition Centre are separate business units, there’s a lot of sharing of knowledge and technology between the two. Without leveraging Aakash’s network, Mohit believes BYJU’S cannot hope to scale up to 500 centres in a year. Aakash has also provided the data related to locations, development of centres and ensuring compliance with regulations.

“Aakash is well integrated in our ecosystem of products, but they run as a separate organisation. BTC focusses on grades 4-10, while Aakash is more focussed on 11th, 12th and competitive exams. But I will say that there is a lot of synergy between the two,” added BYJU’S Tuition Centre’s business head Bajaj.

It’s not just Aakash, but also the 2019 acquisition of US-based vision technology company Osmo that has allowed BYJU’S to take a tech-first approach to the coaching class space.

Even as edtech platforms have scaled unprecedented heights amid the pandemic, now that schools are reopening, the need for blended learning is clear and present. Even if online learning continues to remain a norm outside the classroom, the requirement of a physical teacher will never go away. At the end of the day, the personal touch and the teacher-student connection in education will always be of utmost importance, and even the biggest edtech startup in the world has now acknowledged the hybrid future of edtech.