Deal Or No Deal? The Murky YoloBus Distress Sale To EaseMyTrip

Deal Or No Deal? The Murky YoloBus Distress Sale To EaseMyTrip Some sources within YoloBus claimed that EaseMyTrip made the announcement in hurry, while sources at EMT say their announcement was misconstrued as a done deal

Interestingly, YoloBus has more or less halted operations for the past many months with its cofounder Gupta focussing largely on his new startup Polysynth

Startup investors always expect some misses along with the hits. The failure rate of startups means investors need to perform a balancing act — especially true for seed and angel investors. Some early investments work, while others fizzle out.

Take the example of angel investor and GSF Accelerator founder Rajesh Sawhney, who saw exits with multifold returns on investments such as Pokkt and DailyRounds, but in the case of another early bet — YoloBus — the situation is bleaker.

The intercity bus booking startup slumped in the wake of the pandemic after scaling up to more than 10 cities. So angel investors such as Sawhney would naturally have welcomed the announcement of YoloBus’ acquisition by EaseMyTrip, the public-listed travel tech company. But that does not seem to be the case.

Soon after the announcement came in the form of a press release, Sawhney claimed on Twitter that YoloBus founder did not respond to calls, and also deleted a WhatsApp group chat which consisted of the startup’s early investors. Essentially, the founders of YoloBus had not informed angel investors about the deal. 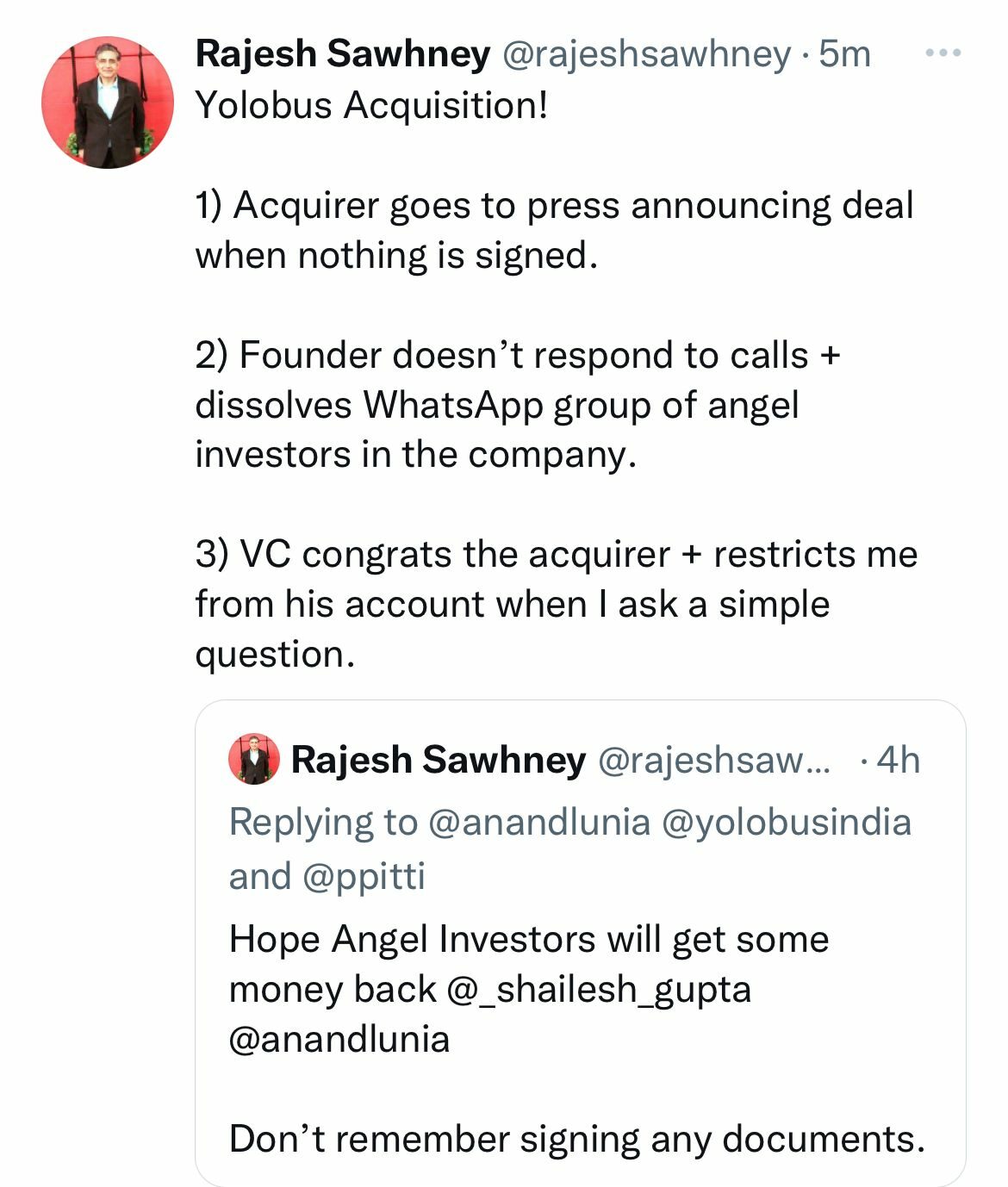 In his tweet, which has since been deleted, Sawhney claimed that no deal has been signed between YoloBus and EaseMyTrip (EMT), but the announcement was made.

Inc42 has independently verified the existence of the WhatsApp group chat, which is titled ‘Yolobus Investors’. The screenshot indicates that YoloBus cofounder and CEO Shailesh Gupta removed all investors from the group. 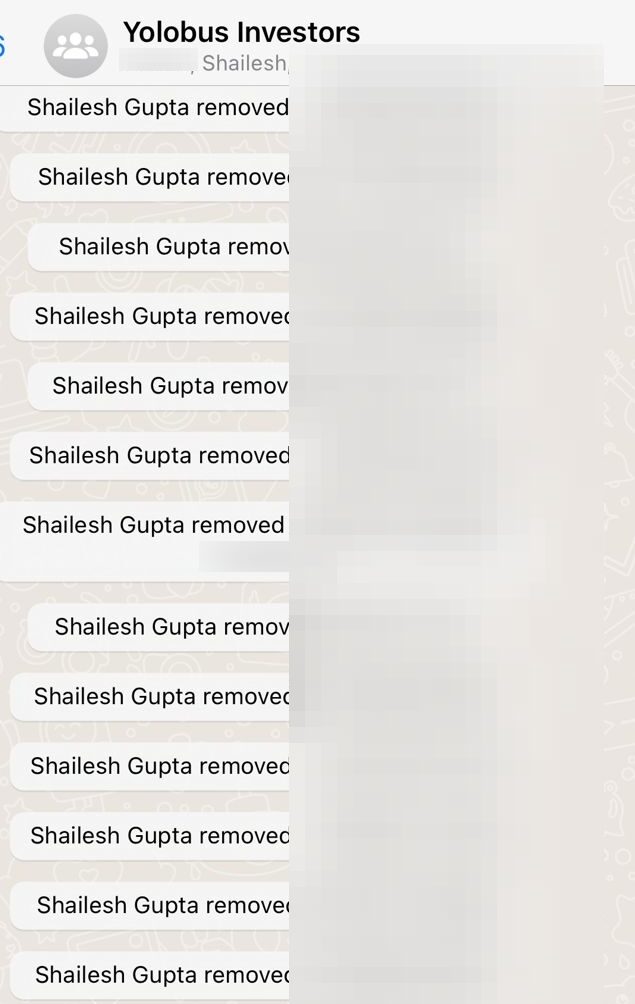 Naturally, plenty of questions have come up in the light:

So what exactly is going on with this deal?

Is The EaseMyTrip-YoloBus Acquisition Done?

It operates an asset-light model by partnering with existing bus operators and then standardising the vehicles with features, similar to how OYO worked with hotels. Until last year, YoloBus services were available in 10-12 cities including Hyderabad, Bengaluru, Chennai, Delhi, Lucknow and Manali.

While India Quotient founding partner Anand Lunia tweeted to congratulate YoloBus on the acquisition, he declined to comment when Inc42 asked him for a statement on Sawhney’s claims. Sawhney has also claimed that Lunia restricted him on Twitter when he brought up the concerns. 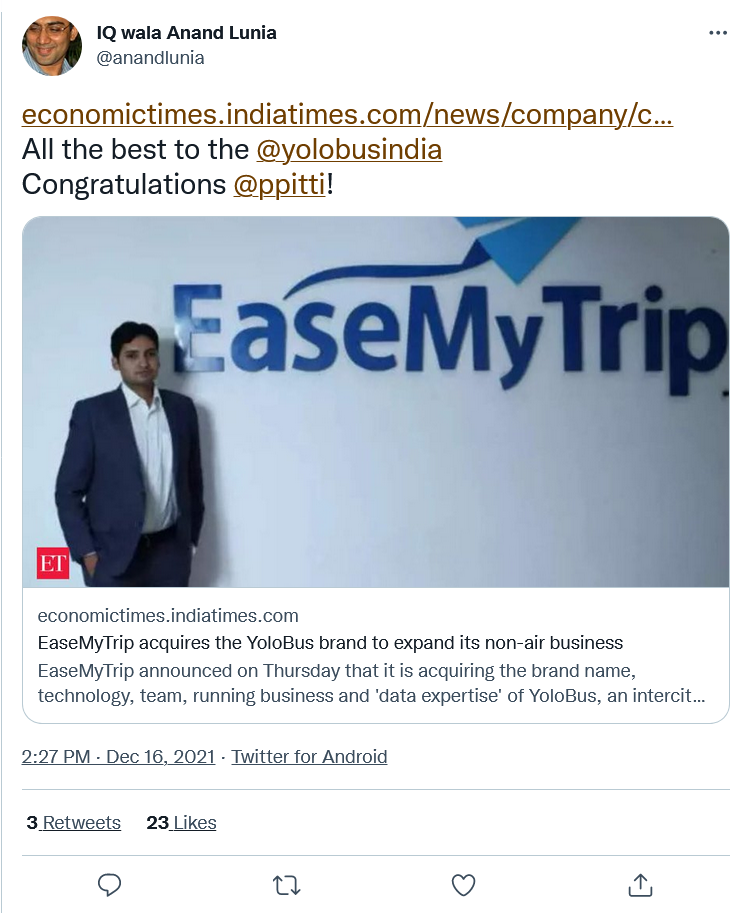 Inc42 also reached out to half a dozen other YoloBus angel investors based on the WhatsApp group chat screenshot. While FirstCheque CEO Kushal Baghia and Fynd cofounder Farooq Adam declined to comment, others such as angel investor Prashant Malik and Venture Catalysts VP Rajesh Mane did not respond to our queries.

One angel investor told Inc42 on the condition of anonymity that investors did not receive any consideration or offer of exit from the founders.

“To the best of my knowledge, no agreement has been signed,” the investor added.

A source within YoloBus claimed that no deal has been finalised yet, claiming that EaseMyTrip jumped the gun on the announcement. The source also claimed that angel investors in YoloBus will see pro-rata returns based on their holdings in the company, once the deal is signed and the amount is transferred over.

The source added that angel investors have been apprised about the latest developments in relation to the EMT deal.

YoloBus and EaseMyTrip declined to comment on the deal.

Did EaseMyTrip Jump The Gun?

While publicly-listed EaseMyTrip did not respond to queries about the premature announcement, it did claim in a separate statement that the terms of the deal will be disclosed in the future once the stock exchanges have been notified. The press release added that YoloBus was valued at INR 84 Cr at the time of its Series A round last year, but does not mention the terms of the deal.

A high-level source close to EMT told us that the term sheets have been signed and the deal will be finalised by next week. “Some media outlets have jumped the gun,” the source told us on the condition of anonymity because they aren’t authorised to speak to the press.

But EMT’s press release clearly states that it has “acquired YoloBus’ brand and technology”, and there are comments on Twitter tagging the CEO and the founding team from VC investors that made it seem like a done deal. So there’s definitely some mismatch in what we were told privately by our source and what the company is claiming publicly.

Indeed, in official filings, EaseMyTrip takes a more reserved stance and does not use the word ‘acquired’.

EaseMyTrip has an eventful first year as a public company. In October, the company emphasised that it will look to acquire businesses in order to grow in the non-air category. Last month, it acquired Spree Hospitality to widen its footprint in the hotel and holiday packages businesses. Since then over the past month, the stock is up by nearly 10%.

EaseMyTrip’s shares ended the past week at INR 562.50, down INR 20 (3%) since opening on Monday. It remains to be seen whether the announcement of the terms of the deal in the coming week, if at all, will have a positive impact on the stock.

Since its opening day listing at INR 212.25 in March 2021, EaseMyTrip’s share price has more than doubled in its first full year as a public company.

The stock saw a major rally in mid-September, after seeing smaller gains since March. Interestingly, EMT claimed in September this year that it was being targetted by fraudulent SMSes in a misinformation campaign, which resulted in its stock price crashing. The stock hit its all-time high price of INR 663.15 on September 17 climbing over 20% in two days, before crashing to INR 468.6 in late October, after which the Spree acquisition was announced.

In its statement to the Bombay Stock Exchange, EMT denied any knowledge of the origin of the unsolicited messages.

From YoloBus To Polysynth

Interestingly, Gupta has already seemingly moved on from YoloBus, and founded another startup — investment tech platform Polysynth. According to his LinkedIn profile, Polysynth was founded in September 2021, three months before any talk of acquisition for YoloBus came to light.

Gupta has founded the investment tech startup along with Paritosh Gupta, the former YoloBus chief technology officer. As per company incorporation documents, the Polysynth protocol is owned by Singapore-registered Block Labs Pte Ltd, where Shailesh Gupta is a director along with Paritosh Gupta. Block Labs Pte Ltd was incorporated on August 4, 2021. Polygon cofounder Sandeep Nailwal is an advisor for Block Labs, as per the company’s white paper, which has now been taken down.

The page was removed after Inc42 had questioned Shailesh Gupta on how long he has been associated with the company. We have archived the page and it can be viewed here. 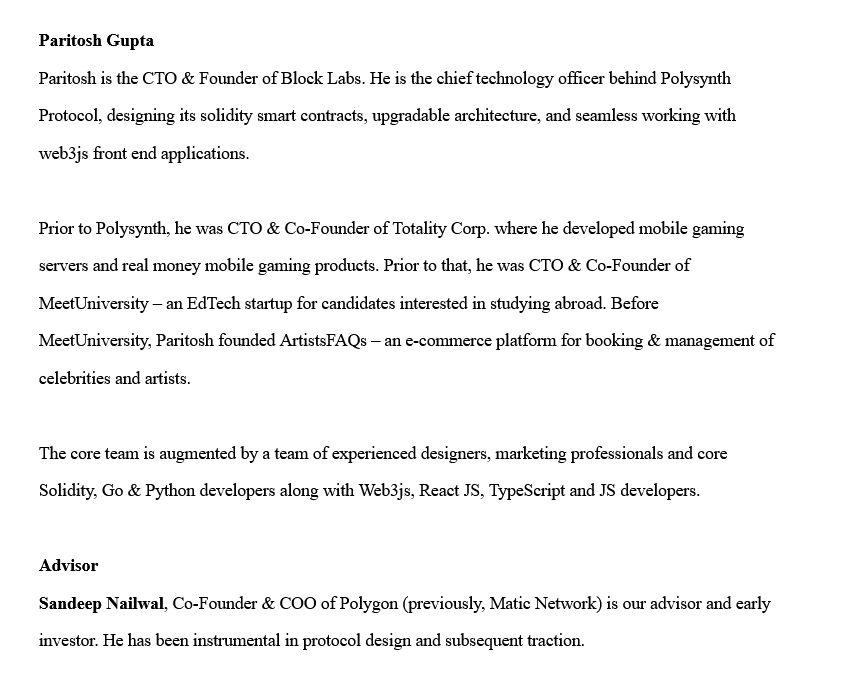 Polysynth has raised $1.5 Mn as part of its seed round from Nailwal and the other Polygon cofounder Jaynti Kanani, the startup’s head of strategy Sanket Shah, DeFi Alliance and Hashed Polysynth’s website says that its services are offered by Polysynth Pte Ltd. However, there’s no indication that Polysynth Pte Ltd is an actual company. We were unable to find any documentation about Polysynth Pte Ltd.

Last year in August, Danish Chopra, another YoloBus cofounder, exited the company and is now the CTO of Amenify, a San Francisco-based real estate technology company. He was replaced by Paritosh Gupta who has since moved on to Polysynth.

It must be noted that Shailesh Gupta is not a director in YoloBus. However, his family members Hariom Gupta and Beena Gupta are named as directors in the company along with cofounder Mukul Shah. This despite the fact that Shailesh owns 56.85 % stake in the company as per filings made in March 2020.

Mukul Shah did not respond to Inc42’s queries. He is expected to continue leading the bus vertical within EaseMyTrip after the acquisition, whenever it is finalised.

Before setting up YoloBus, Gupta was CEO of OYO-acquired Innov8 Coworking. Incidentally, there is also an FIR lodged against Gupta in Delhi’s Preet Vihar police station in 2018 under IT Act 2000 65/66C for online theft and impersonation. Inc42 has seen a copy of the FIR (No 0132/2018) filed under Section 154 of the Criminal Procedure Code, however, it’s not clear if any further action was taken against Gupta.

Pandemic Puts The Brakes On YoloBus

Like other travel tech startups, YoloBus was heavily impacted by the pandemic in 2020 and 2021. All signs point to it barely managing to keep operations going on its earlier routes post the second wave this year.

In October this year, sources indicated to us that YoloBus is not taking any bookings and that Gupta had left to launch Polysynth.

However, the company told us then that Gupta continues to be the founder and CEO of YoloBus, and that the company is not shutting down. It clarified that after the second wave of the Covid-19, the company has been running buses on a limited number of routes depending on demand.

We were also told that the YoloBus would be raising funding to expand its fleet and add electric vehicles, with operations going back to normal in November. While we were told Lucknow-Varanasi and Delhi-Manali routes were seeing high demand in 2021, we were unable to make bookings even on these routes. And now in December, the company appears to have lost its resolve in this tough market.

The pandemic which is now entering its third year has ravaged the travel and tourism sector across the world. While most travel and tourism activities resumed in 2021 after the second wave, the current Omicron variant has spooked markets once again due to the higher rate of transmission.

In 2021, we saw at least one travel tech distress sale in the form of Shuttl. Gurugram-based bus tracking platform Chalo acquired the Amazon-backed office commute bus service platform. The acquisition was seen as a distress sale as Shuttl, which had earlier raised close to $90 Mn, failed to raise more capital during the pandemic. The acquisition by Chalo announcement took place amid rumours of Shuttl shutting down.

Chalo is also reportedly in talks to acquire Bengaluru-based bike rental startup Vogo, as it too looks for a lifeline.

Given this climate, it’s not a surprise that YoloBus is going through its own struggles. It’s pretty clear that the company has been struggling to revive business and by all indications. Even the EMT acquisition is about bringing onboard talent — many of which have moved on to Polysynth — and YoloBus’ expertise, rather than its user base, network or services.

Yes, the pandemic has been the death knell for some startups, but the fact is that the larger Indian tech companies and growth stage startups have thrived in the post-pandemic market. We expect fierce competition between larger players in multiple sectors, including in travel. EaseMyTrip will soon be joined by ixigo and others in the public markets.

In such a bullish climate, companies need to show growth and prove that they have a plan to take on the competition. But this cannot come at the cost of corporate governance or disclosure responsibilities.

On YoloBus’ side, the founders failed their responsibility by shutting out some investors while making the deal. And EaseMyTrip’s hurried announcement and the non-disclosure of YoloBus’ state of affairs is also a failure of responsibility, in our view.

On the surface, this may not seem to be a big issue and one that only affects some investors. But even given the growth in the past year, we are still in the early days as far as the tech industry goes. As the prevalence of startups and technology grows, is asking for more responsibility from tech leaders and founders too much?