Paytm, Nykaa, Zomato & New-Age Tech Stocks: After The Crash, Is A Comeback In The Offing?

Paytm, Nykaa, Zomato & New-Age Tech Stocks: After The Crash, Is A Comeback In The Offing?

And after the highs of the IPO frenzy, most of the listed new-age tech stocks have shed approximately 50% of their value since their listing amid global sell-off pressures

The withdrawal of liquidity by key central banks and rising bond yields could lead to a fall in richly-valued stocks, according to experts and securities analysts

Further, investor preference is shifting to value stocks given the geopolitical and macroeconomic factors, so the worst is far from over for listed tech stocks

The sheen on new-age tech stocks has been wearing off at a fast pace. In tune with the market slump due to the geopolitical crisis and anticipation of interest rate hikes in developed economies, share prices of tech startups such as Zomato, Paytm and Nykaa have tanked, erasing a large part of investor wealth.

These and other new-age tech stocks are now being closely watched as a further erosion in their market cap, which looks almost certain, can have wider implications. And after the highs of the IPO frenzy through much of 2021, there is a more conservative atmosphere among investors in the past two to three months.

Investors had taken heavy bets on these new-age tech stocks when they came up with their IPOs last year. High valuations, which according to many were not justifiable, and complicated business models in some cases, did not dampen the investor interest.

Institutional investors, foreign as well as domestic, and retail investors lapped up the shares on offer. Most of the IPOs saw healthy oversubscriptions. Reflecting the investor enthusiasm further, the share prices of these internet-based companies surged on their listing day. 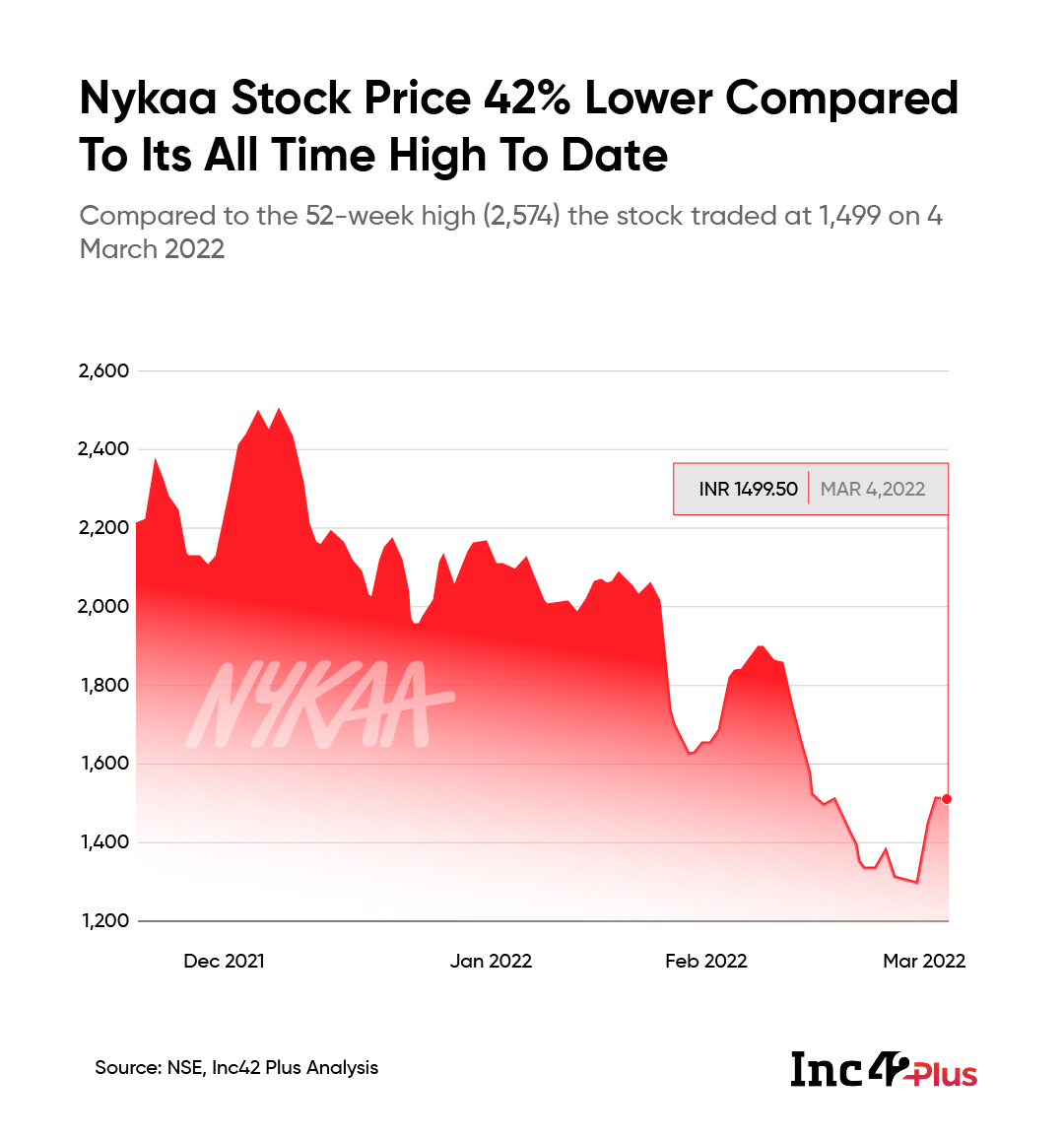 The reversal since then has been no less dramatic. For example, Nykaa which surged to INR 2,001 on BSE and achieved a market cap of INR 1 Lakh Cr on debut on November 11 last year, was trading at INR 1,504 (M-cap- INR 71,538 cr) as of March 4, 2022. Most of the recently listed new-age tech stocks have shed approximately 50% since their listing.

Even at the time of IPOs, a handful of market pundits had dismissed the hype and hoopla around these offerings. The wild swings in share prices have once again raised pertinent questions about new-age tech stocks. Their business models, short-term and long-term prospects, and their role are being questioned, along with VC and private equity valuations.

Worse Not Over Yet

One big question is about the FII interest in new-age tech stocks going forward, which is a big factor even today in India. Will the rising interest rate scenario in the US impact new-age tech stocks in India? Will foreign investors or FIIs show renewed interest in tech startups? Of course, the Russian-Ukraine conflict makes the picture more complex and a war is never great for stock markets.

Experts feel the rising interest rate and bond yields could hurt the valuations of new-age companies. The withdrawal of liquidity by key central banks and rising bond yields could lead to a fall in richly-valued stocks. “After the sharp correction in Nasdaq, many of the world’s largest technology companies are looking attractive on valuations. Given the choices, FIIs could prefer to invest in some of the leading tech stocks in Nasdaq. This could also keep FII interest on the lower side for many new-age listed companies in India,” Suresh Shukla, joint president, Kotak Securities, told Inc42.

There is another dimension that makes these stocks more vulnerable. New-age tech companies are essentially “classic growth” stocks, while the investor preference is shifting to value stocks amid the high probability of gradual rate hikes, persisting inflation worries and geopolitical crises. The Fed Reserve is expected to continuously hike interest rates this year and central banks in Asia and Europe are also most likely to follow that path. It will, of course, be a different story if the Russian-Ukraine conflict snowballs into a much bigger crisis.

Mohit Ralhan, the managing partner at TIW Capital Group, believes that investors are likely to become risk-averse and the allocation to equities may come down. “As far as fresh investment in these stocks is concerned, I believe that they are not the best available opportunities in the current environment.”

Even though the ongoing correction can be termed as a direct consequence of initial high valuation, the broader market dynamics have also changed drastically. According to Ralhan, FII allocation in India is decreasing and the new-age tech stocks are part of that. “There is a marked shift happening from high PE to low PE stocks.”

The worst is definitely not over yet. Analysts are certain that more correction is in store as FII interest continues to wane. According to Kotak’s Shukla this foretells consolidation. “There could be some more correction in the loss-making companies where cash burn is high and earnings visibility is missing. Select stocks with a strong business model, less cash burn and future earnings visibility could bottom out very soon and go into a consolidation phase,” he added.

Quarterly earnings numbers that came out post listing dampened the investor sentiment too. The mismatch between valuations and earnings figures was too apparent to ignore. Most of these new-age companies were valued between 8x to 15x the sales. 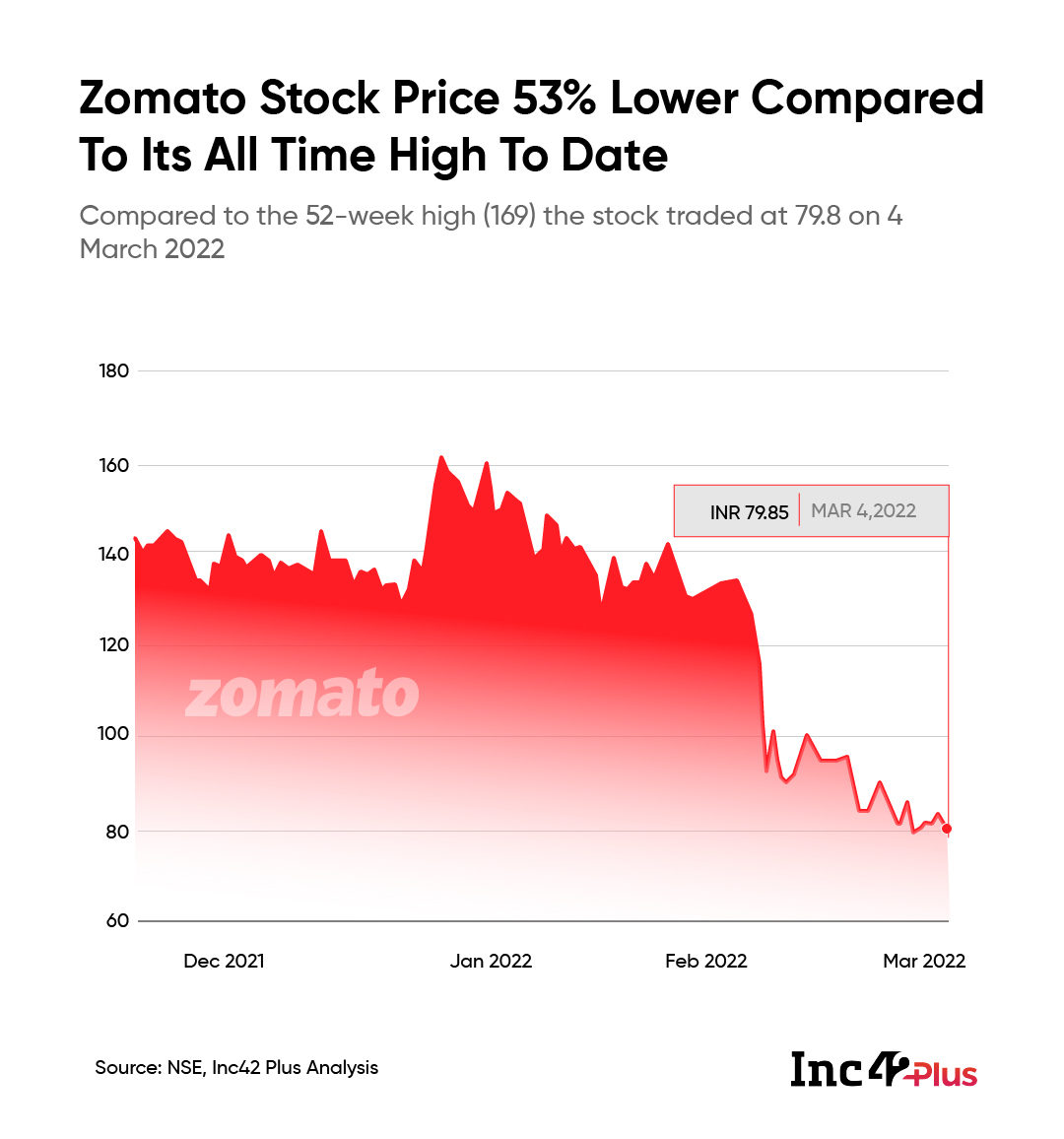 The benchmark used for most new-age companies before the listing was led by private equity players who are very long-term investors and their approach to business is different. “Somewhere, post a listing and after reading the quarterly results, secondary market investors are finding the valuations to be on the higher side,” Shukla said.

Why Buyback Is Not An Option

Retail investors who had to bear the brunt of relentless selling would look to cut losses if they can’t recoup their losses. Their confidence in startup stories is critical too.

“Going forward, investors would look for profitability, financial record and prospects before investing in these firms,” said Chepa.

What’s In Store For The Big Three?

On the three big individual stocks —  Paytm, Zomato and Nykaa —  Shukla said, “If we look at the consensus estimates, then Nykaa is expected to report a net profit of INR 460 cr in FY24E Vs INR 65 cr in FY22E. On the other hand, both Paytm and Zomato are likely to report a net loss of about INR 1,800 cr and INR 525 cr, respectively in FY24E.” 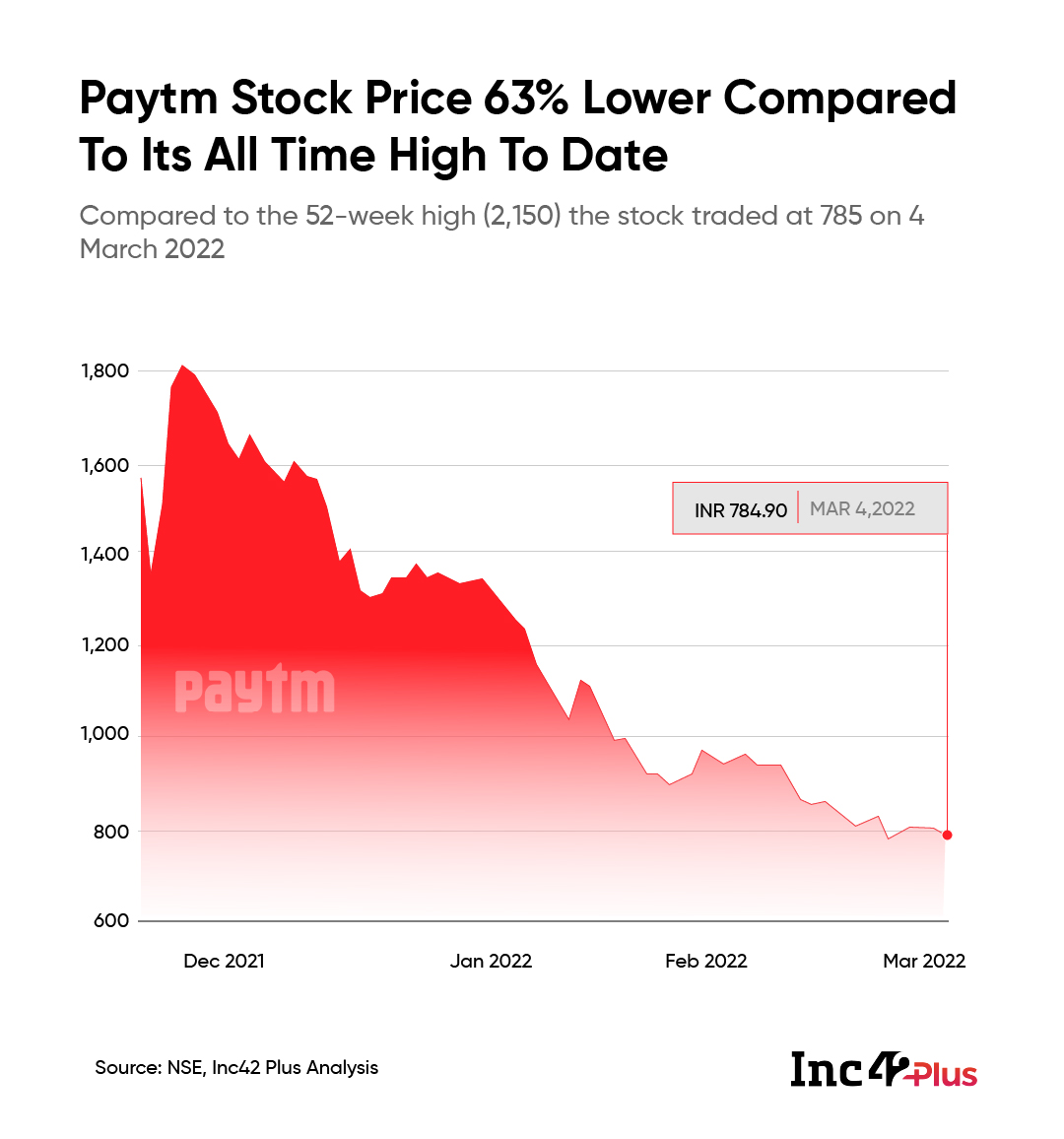 Based on Bloomberg consensus estimates, the upside in bigger listed names like Paytm, Zomato and Nykaa is coming up to 64%, 57% and 47%, respectively. From the recent 52-week low, Nykaa has already pulled back by 33% but Paytm and Zomato are still only up in single digits.

According to Shukla, companies that will see revenue growth slowing down vis-à-vis what they have reported in the last three years will come under selling pressure in future.

“While Paytm is arguably a bigger brand, the business models of Zomato and Nykaa are more straightforward and easier to understand. As far as investors are concerned, there is a shift in preference and Paytm probably needs to simplify and explain its business model in more detail,” Ralhan said, adding that their financial performance over the next few quarters will be keenly watched.

The Future For New-Age Stocks

New-age companies are unlikely to post exciting earnings figures in the next few quarters. The disappointment factor in the quarterly figures could be discernible when they are compared with some high-growing and profitable sectors.

Prospects are relatively bright long term as some of the newly listed companies have the potential to become profitable in 4-5 years. The correction should be seen as a part of the transition and nothing is permanent in the market.

“This is one segment, which was largely missing in the Indian market, and it will not only increase the maturity of our market but also the options available to investors.”

India has the third-largest startup ecosystem in the world and a thriving capital market would definitely help entrepreneurship flourish in India.