2020 in Review: When Global Tech Giants Were At The Epicentre Of Trouble In India

2020 in Review: When Global Tech Giants Were At The Epicentre Of Trouble In India 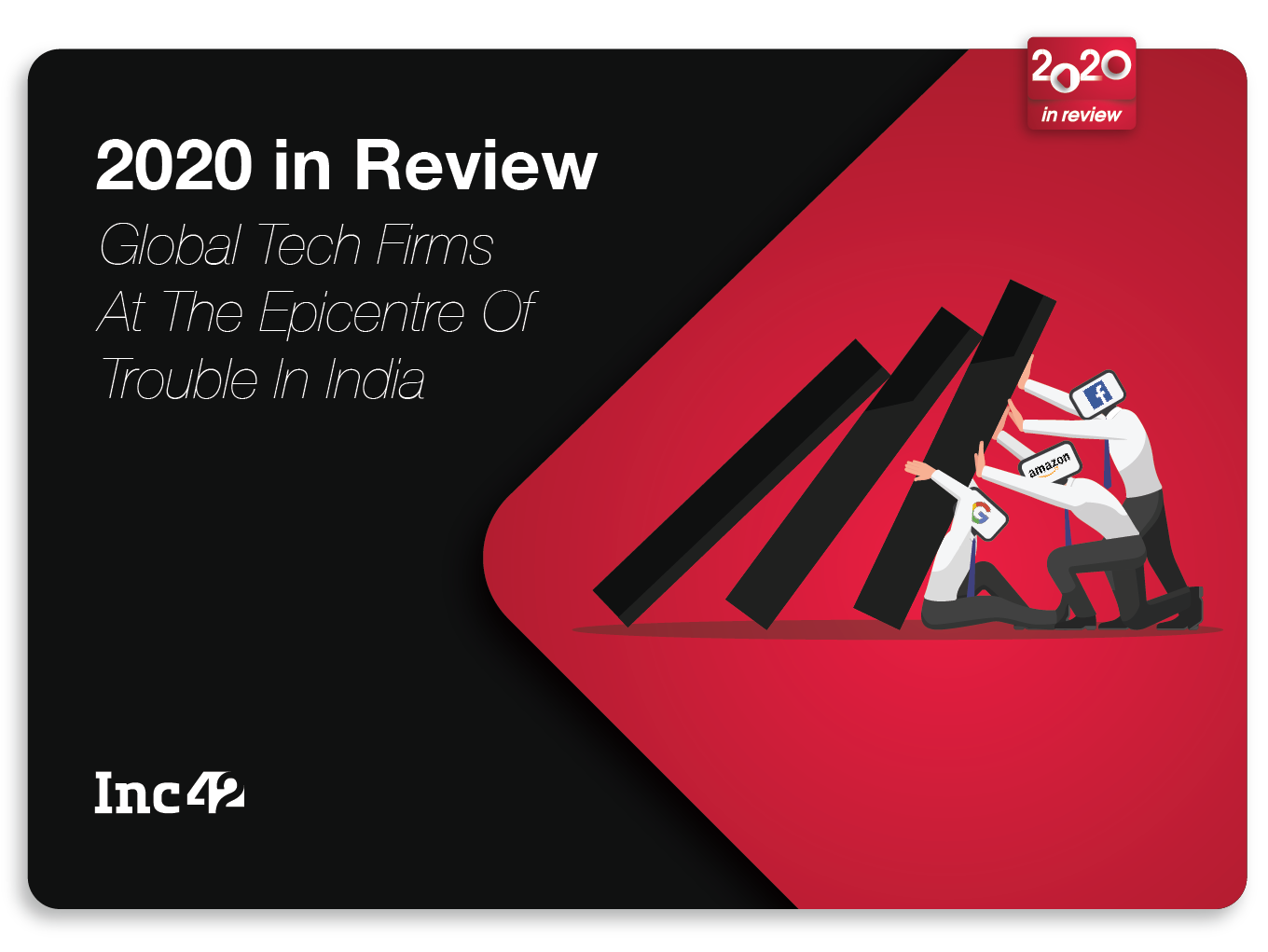 From run-ins with the government to PR disasters, big tech companies found themselves on the wrong side of public sentiment more than once in 2020

Facebook, Amazon and Google are in the centre of major controversies which surround their core businesses in India

As global tech companies continue to expand their base in India, their operations have also come under intense scrutiny

Not much has gone right in the Year of the Pandemic when enterprises are compelled to halt operations, reduce scale or pivot completely to stay afloat. But even the force majeure has not deterred global tech companies from expanding big in India with increasing investments, key appointments and deep operations across the country. It is not surprising. The FAANG firms, as well as other tech giants from all over the globe, know it as a matter of course that they have to crack the burgeoning Indian market for incremental growth. But in doing so, they often fall foul of users and governments.

The so-called Big Tech is already in deep trouble in the US, facing breakups and more stringent regulations.  Indian policymakers and regulators have also recognised the tech firms’ consumer reach closer home and increased their scrutiny of these companies. The outcome: Many were called out in 2020.

Facebook, Google and Amazon often found themselves in trouble for myriad but rather repetitive reasons. For starters, social media platforms in India and abroad have come under fire for their socio-political biases, policy gaps (including massive breaches in user privacy), manipulative tactics and online abuse. Facebook’s ‘inability’ to control hatemongers and the way they utilised the platform for political gains during the US Presidential polls or Indian elections are cases in point.

Global OTT (over-the-top) content-streaming platforms also found themselves in a tight spot as they were taken to court for the (offensive) nature of the content and their lack of censorship. At least  23 cases related to OTT content are now being heard in different courts of the country, raising concerns over their impact on the fast-growing OTT sector. Incidentally, the Ministry of Information and Broadcasting, currently the nodal ministry for all OTT content, is reportedly seeking to transfer all court cases against the OTT platforms to the Supreme Court to ensure standard regulations for online curated content.

Interestingly, the ongoing geopolitical face-off between India and China also landed tech companies in hot water. As data integrity and security take centre stage in an increasingly connected digital ecosystem, India has banned as many as 267 Chinese apps for ‘national security’ reasons, and Chinese investors of the startup ecosystem are facing an uncertain future.

These are definitely not the ‘disruptions’ many tech companies were looking for, but an in-depth exploration of the controversies is bound to give us a better perspective of things.

For some time now, controversy and Facebook seem to be going hand in hand. The social media giant continues to find itself at odds with employee sentiments, especially when it comes to curbing the spread of hate on this platform. Facebook employees all over the globe have been questioning the procedures and content regulation practices followed by the company’s global and India teams.

But things took a turn for the worse when 11 of its employees wrote a letter to the Facebook management, pointing out how Ankhi Das, then policy head of Facebook India, failed to take down certain posts which spewed hate and bigotry. According to a Wall Street Journal report, Das opted against removing incendiary posts from politicians of the ruling Bharatiya Janata Party (BJP) to seek favours for the platform from the Indian government. The incident ended with a parliamentary panel investigation and Das’s eventual exit from the company.

Instagram, the photo-sharing app of Facebook, also sparked a raging controversy. Earlier this year, it failed to take any action when a lewd private chat group called Bois Locker Room (mostly run by Indian teenagers) surfaced on the platform. The online chat group was busted by the police and taken down for glorifying obscenity and abuse. Under Section 20 of the POCSO Act, Instagram was required to file a complaint with the Special Juvenile Police Unit or the local police as soon as the chats came out in public, but it did not happen.

The lurid saga underlines how different groups are using social media platforms like Facebook and Twitter for their specific agendas, and how the platforms are still failing to curb acts of misuse, trolling and bullying.

Meanwhile, micro-messaging platform Twitter was served a legal notice after it displayed a map of Leh as part of the People’s Republic of China and later as part of Jammu and Kashmir state instead of a separate Union Territory. The Indian government wrote a stern letter to CEO Jack Dorsey, expressing its strong disapproval of the misrepresentation of India’s map.

As mentioned before, all was not well for the all-pervasive app industry, mostly ruled by Chinese tech firms, when India and China had a border face-off in June this year. The Indian government has retaliated sharply since then and initially banned 59 Chinese, followed by many more in the subsequent months. According to media reports, these apps were violating India’s data security protocol and leaking the private data of Indian users. As many as 267 apps have been banned until now, and many more heads may roll. Short-video app TikTok, file transfer app SHAREit, UC web browser and fashion platform Shein are some of the most popular apps currently banned in India.

The tale of woe continued. In September, the Ministry of Electronics and Information Technology (MeitY) issued an order banning more mobile apps. One of these was PUBG Mobile, a South Korean gaming app, which was peremptorily banned because of its Chinese partner Tencent. Although PUBG’s intellectual property is developed and owned by a South Korean company, the fact that Tencent published its mobile version saw the game falling to India’s sweeping crackdown on Chinese apps. Tencent’s valuation also took a $14 Bn hit after the India ban.

Alibaba, another Chinese e-commerce giant, also drew flak after a report claimed that officials found 72 of Alibababa’s cloud data servers were sending Indian user data to China. The group is also rethinking its India investments after the government amended the FDI (foreign direct investments) norms in October for countries which share a land border with India.

Traders’ bodies in the country also demanded thorough scrutiny of the Chinese share of investments in Indian startups. They wanted to know whether these Indian companies (backed by Chinese funders) store the data of Indian users locally or abroad, to what extent they are using Chinese technologies and whether such technologies have in-built spying capacity.

In sync with the new-found nationalist sentiment, e-commerce giants Amazon and Walmart-owned Flipkart were issued notices for not effectively disclosing the country of origin of the products sold on their marketplaces.

Amazon got a cold shoulder from the Indian government when its owner and CEO Jeff Bezos visited India in January and promised to invest $1 Bn in India besides creating a million jobs. Union Minister Piyush Goyal said that the ecommerce platform was doing no big favour to India by investing a billion dollars. “They may have put in a billion dollars, but then, if they make a loss of a billion dollars every year, they jolly well have to finance that billion dollars,” he added.

Bezos had faced massive opposition on multiple fronts. Even before his visit, the Competition Commission of India (CCI) announced a probe against both Amazon and Flipkart for their ‘controversial’ discounting practices which reportedly rob small traders and businesspeople of their rightful margins. Traders’ bodies also held large protests across the country against his visit, underlining their deep distrust of the global conglomerate.

In fact, the e-commerce giant had been in trouble with the Confederation of All India Traders (CAIT) right through the year. CAIT accused Amazon of violating the Foreign Direct Investment (FDI) policy and the FEMA (Foreign Exchange Management Act) norms in November, but the multinational company denied these charges.

In October this year, Amazon approached a Singapore-based arbitration panel to put on hold the INR 24,713 Cr deal between Kishore Biyani’s Future Group and Mukesh Ambani’s Reliance Retail. The background here is a bit complex. For starters, Amazon holds about 5% stake in Future Retail after it acquired 49% stake in Biyani’s Future Coupons, a promoter holding company, for INR 1,500 Cr. The US retail giant also claims that it has the first right to any stake sale initiated by Future Retail and it does not approve the Future Group-Reliance deal. Hence, this move.

Amazon wrote to capital market regulator Securities and Exchange Board of India (SEBI), Bombay Stock Exchange (BSE) and the National Stock Exchange (NSE), trying to stop the deal. Eventually, the CCI gave the deal the go-ahead, thus snubbing Amazon’s claims and concerns. The company was also fined INR 25K in November for not displaying all mandatory information, including the country of origin, on the products sold on the platform.

For global search giant Google, there was no respite in 2020. To start with, the CCI initiated two antitrust investigations against the company. One was for unfairly promoting its own payments app on the Google Play Store and compelling app developers to use its billing system, Google Pay, for in-app purchases. The other case involved anti-competitive practices which prevent companies from creating modified versions of the Android OS for smart TVs. CCI even wrote to 17 startup founders, questioning them and collating their viewpoints on Google’s anti-competitive practices. CCI also fined Google INR 135.86 Cr in 2018 for abusing its dominance in ‘search’.

After drawing flak from the entrepreneur community in India, Google had to defer its Google Pay policy here. Globally, the new rules will stop apps from circumventing Google’s payment system and also ensure that Google gets 30% commission on all paid apps and in-app purchases. The tech giant also found itself in a spot after it briefly pulled out Indian financial services major Paytm’s app from the Play Store for violating policies related to gambling payments.