Even as the ‘Bois Locker Room’ controversy rages on, it has shed light on toxic masculinity and sexual harassment even among school-going teens. Besides hogging the headlines for the unseemly text messages and images being shared on the group, the issue has opened a debate on laws related to privacy and internet security. The misogyny and innuendoes of the 22-member almost all-minor group have lawyers, internet rights activists and social media websites debating over the legal ramifications to the internet ecosystem at large.

While the Delhi Police Cyber Cell, which registered an FIR, on May 4 is investigating members of the group. It also reached out to Instagram seeking a name, email id, IP address of the teens who were part of the group. It has also booked the teens under several sections of the IPC and  IT Act. The information was made public by the DCP of the Cyber Cell, Anyesh Roy, in an interview with The Indian Express. The Acts include:

Meanwhile, advocates Neela Gokhale and Ilam Paridhi wrote to the chief justice of the Delhi High Court Justice DN Patel, highlighting the seriousness of the illegal activities undertaken by members of the group. In the letter, they highlighted the offences committed are punishable under Protection of Children from Sexual Offences Act (POCSO), 2012, Information and Technology Act, 2008 and Indian Penal Code, 1860.

But beyond the legal ramifications of any criminal proceedings that may be brought against the alleged perpetrators, there are multiple issues here given the involvement of social media platforms, private chat groups and elements of internet bullying.

In the immediate aftermath of the revelation of the controversial group on social media, many took turns to defend the accused teenagers, highlighting that the conversation had taken place in a private group chat, and therefore the screenshots doing the rounds were a violation of the right to privacy.

Talking to Inc42, advocate Gokhale said that talking or commenting in a private group wasn’t an offence, but since the chat has made its way into the public domain the teens are liable to punishment under Section 13 and 14 of POCSO. Sections 13 and 14 of the act deal with the use of minors for pornographic purposes. Section 13 includes indecent or obscene representation of minors, usage of minors to engage in real or simulated sexual acts and representation of sexual organ of the minors. Whereas, section 14 describes the punishment for violating Section 13.

Maintaining that a chat group, even if it is private and restricted in nature, is different from a private conversation, Sandeep Das, partner at a law firm AP and Partners said, “If an offence is made in a private invite-only party, it’s still an offence.”

Meanwhile, Gokhale added that the matter will be cleared once the police file chargesheets and the sections applicable in the case come to light. However, she believes that case is most likely to be around making sexual threats, POSCO violations and outraging the modesty of women.

Who’s To Blame – Social Media, Users Or The Admin?

A similar issue came to light in the US on Wednesday, when a private group chat involving several National Hockey League players was made public on social media. The chat included misogynistic messages degrading women, fat-shaming them and speaking about sexual conquests. For some, the incident was a reminder of the 2004 sex tape scandal, which also involved Delhi teens from an elite school.

Even though the Delhi High Court had ruled that it would be illogical to hold WhatsApp group administrators responsible for what goes on in the group, there have been several cases, where the police and local authorities held WhatsApp group admins accountable for posts being circulated in the circle. Highlighting that group administrators cannot be held liable, Prasanth Sugathan, volunteer legal director at the Software Freedom Law Center said that there is no such law in place in India and each person in the group should be held accountable for their own actions.

Gokhale, however, added that the intentions of the admin in the ‘Bois Locker Room’ case are still not clear, if the group was just meant for communication purposes, it was their responsibility to report or remove the person when the first such obscene message was posted. Since that was not done, the admin could be held accountable, but that does not leave other members out of the loop of judgement, she added.

The police have already arrested the admin of the group who is an 18-year-old and have interrogated five members so far. Besides this, the other factor that is being highlighted in the case is that several members, despite being the part of the group, were ‘inactive’ or had not participated in any such activities.

Sandeep Das, founder of law firm AP and Partners, highlighted that though the boys did not participate, they will still be a party to the crime and will be tried under different sections. “They will not be charged with forgery, or sending pornographic material to the group, however, they could be charged for their failure to report the incident.”

Meanwhile, Gokhale put the onus on Instagram too. She said that the social media platform may also be charged for its failure to report, despite the safe harbour provided to it by the government.

Though Instagram is an intermediary platform and enjoys the safe harbour under the IT Act, they will still have to coordinate with authorities and provide relevant details. Under the ’safe harbour’ clause, Instagram is just a facilitator of communication and cannot be held responsible for the content being circulated on the platform. Under the Section 20 of the POCSO Act, Instagram is required to file a complaint with the Special Juvenile Police Unit or the local police as soon as the ‘Bois Locker Room’ chats came out in public, Gokhale added.

However, Instagram has not filed any such complaint and following guidelines, it removed chats from the platform. Gokhale also highlighted that Instagram could have also filed a complaint as soon as the “Bois Locker Room 2.0” was created, but she alleged that they did not act. 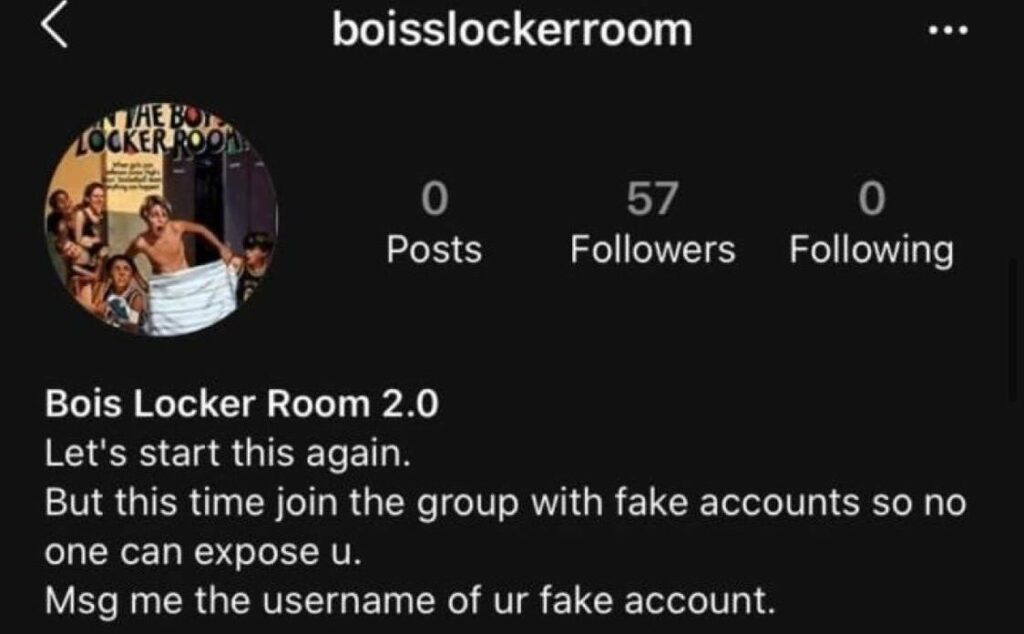 Inc42 had also reached out to Instagram seeking confirmation regarding these allegations, but we did not receive a response till the time of publication. We will update the story as and when we get a reply from the company.

However, Instagram did send a consolidated statement on the issue. “We absolutely do not allow behaviour that promotes sexual violence or exploits anyone, especially women and young people and have actioned content violating our Community Standards as we were made aware of it. We have policies that disallow the sharing of non-consensual intimate imagery, as well as threats to share such imagery and we take this issue very seriously. Ensuring our community can express themselves in a safe and respectful way is our top priority,” the company spokesperson said.

The Rise of Sexual Crimes on the Internet

As we are moving towards a digital-first world, the virtual world is widely replicating the real world in both good and bad terms. While simpler communication and mass connectivity is something that everyone wants, the rise of harassment, trolling and other such activities under the garb of anonymity and private groups are making it harder for the vulnerable sections even on the internet.

According to a United Nations Children’s Fund (UNICEF), more than 175K children go online for the first time on an average every day. The report highlights that almost 80% of the 18-year-olds believe that children and adolescents are in danger of being sexually abused or taken advantage of online. Meanwhile, a report by CyberTipline, released in 2019, highlighted that India accounts for 11.7% of all suspected child sexual abuse exploitation reports received by it, which accounts for 1,987,430 reports, the highest in the world.

When it comes to adults, a survey by cybersecurity solutions firm Norton by Symantec suggests, eight out of 10 women in India have been subjected to some form of online harassment, whereas almost 41% of the women have faced sexual harassment on the web.

Understanding the gravity of the situation, the Delhi Commission of Women (DCW) took suo moto cognizance of the “Bois locker room” and issued a notice to Instagram asking them about the actions taken by them against the alleged abuse. Besides this, DCW also asked Instagram to submit the copy of the FIR registered in the matter and share the details of the members of the group.

DCW chief @SwatiJaiHind issues notice to Instagram and Delhi Police in the matter of a group named “boys locker room” being used by some miscreants to share objectionable pictures of minor girls and planning illegal acts such as rape of minor girls. #boyslockerroom pic.twitter.com/PyzxGCv7kt

The ‘Bois Locker Room’ controversy is expected to drag on till there’s more clarity from the authorities on which sections of the law the boys have violated. But beyond the legal ramifications, the broad spotlight for this saga could shine a light on how social media platforms are being abused by minors too. India is yet to release its updated intermediary guidelines for social media platforms, which could impact how such private groups and chats function in the future. Will this incident bring the government’s attention to apps beyond its primary focus i.e. WhatsApp and how they are being misused?