Indian startups are reeling from the current slowdown in the global markets, resulting in layoffs, cost-cutting. But the worst is yet to come

In 2008, Sequoia Capital released an advisory for its portfolio companies in light of the housing market bubble, which started as a mild slowdown and blew up into a global recession. Sequoia’s presentation 14 years for The Great Recession began with an ominous gravestone, and today, the VC might as well revisit some of the sections for what its portfolio can expect in 2022 and 2023.

If 2008 was bad, it was due to a singular precipitating factor related to the housing market bonds, but now several factors are threatening business growth, and the momentum of 2021 for Indian startups might well come to nothing. Indian startups are reeling from the current slowdown in the global markets, resulting in layoffs, cost-cutting. But the worst is yet to come

Are we in another recession or startups just caught in a slowdown due to policy pressures? Before we jump into answer that, here are the other top stories of the week:

That talk of a global recession comes soon after the business slowdown in early days of Covid in 2020, just goes to show that the world has not fully recovered from the pandemic. If there was elation after a record-breaking 2021 for startup funding where $42 Bn was poured into the Indian startup ecosystem, perhaps the celebrations were premature.

Globally, there are worrying signs: In China, the government’s strict lockdown has arrested the growth momentum and derailed much of the post-Covid recovery in the manufacturing sector. In India and the US, the central banks have increased interest rates that have caused a slowdown in startup and public investments.

In Europe, there’s a war knocking on the doors of the Western powerhouses driving up prices of energy and essentials, while climate change rages on unabated in the form of heatwaves pretty much all around the world.

In India, the biggest impact of the global slowdown is being seen in the form of layoffs and cost-cutting measures by startups as well as restructuring of businesses around growth areas resulting in further downsizing.

Startups that have the runway are realising that now is the time to focus more on unit economics, sustainable scaling-up and business fundamentals — something that unicorn founders such as Zeta’s Bhavin Turakhia and CRED’s Kunal Shah are being vocal about. 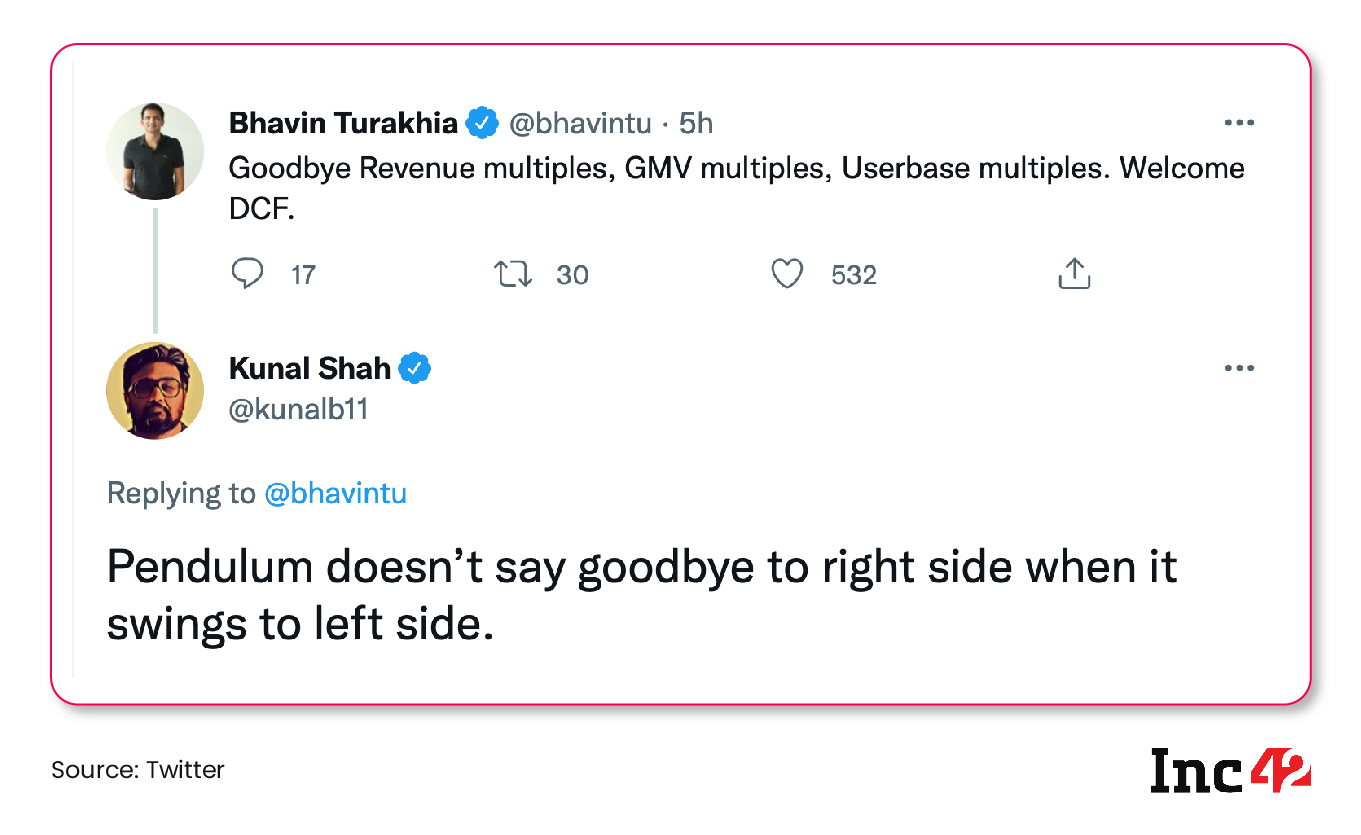 This past week alone, we have reported about layoffs at unicorns Vedantu, automobiles marketplace Cars24, which brought the total number of impacted startup employees to over 5,600. And that was before mFine laid off 75% of its workforce and fired 600 employees, as reported exclusively by Inc42.

If that is not ominous enough, VCs and investors are warning about a tighter crunch in the months to come.

This brings us back to the Sequoia memo in 2008. In 2022, we are seeing refreshed takes on the same caution that Sequoia had espoused more than a decade ago. Silicon Valley giant and early stage investor Y Combinator has advised its portfolio to “plan for the worst” and claimed that a 13-year bull run has come to an end.

YC urged startups to cut their expenses and focus on extending their runways. “If your plan is to raise money in the next 6-12 months, you might be raising at the peak of the downturn. Remember that your chances of success are extremely low even if your company is doing well. We recommend you change your plan,” YC said in the memo, titled “Economic Downturn.”

Other investment majors such as Redpoint Ventures have also urged founders to strap in for rough times. “Six months ago, the recommendation was for every company to try to grow as fast as you can. Today, I think with more companies than not, we’re being conservative in terms of hiring and burn,” Redpoint Ventures managing director Tomasz Tunguz was quoted as saying.

While currently, investors are sobering up to say the least after the 2021 party, market sentiment can change quickly. If at all the bearish weather lasts for the next 8-10 quarters as expected by Redpoint, then startups will be impacted severely — particularly those that do not fall in line with the expectations of sustainability.

The IPO parade has come to a standstill — just showing that even slightly mature startups are feeling the heat of the global economic crunch. While over 20 IPOs were expected this year, only Delhivery has gone through with it. And the results were less than encouraging, which is likely to prompt delays in other listings too. Even the highly-anticipated LIC listing turned out to be underwhelming.

The challenge for Indian startups amid this slowdown will be to streamline operations, cost structures and the monetisation models faster than the slowdown catches up to them. Of course, we are already seeing a correction in startup funding and valuations, where even companies like Ola are staring at a down round. The company has pushed its IPO plans, and has laid off 2,100 contracted workers from its quick commerce biz. And yet more layoffs will come at other startups.

Besides layoffs, startups have had to revisit grand expansion plans and new verticals that were added in the past year, including Swiggy (Genie & SuprDaily), Ola’s failed food delivery biz, Meesho’s juggling of various ecommerce models. Many of these launches were only possible because of the extra cash sloshing around in the market last year, which has now been sucked out.

The blitzscaling and throwing money to grab talent can only go on for so long. Everything from salaries to expenses at Indian startups will now go through a rationalisation given the slowdown. Even if startups and tech companies acknowledge that the party is over, the overindulgence in the past year and the subsequent hangover might be the real killer.

Here’s how some Indian tech stocks have done since listing. Most of them have recovered slightly after being hammered by the global slowdown in stock market performance: 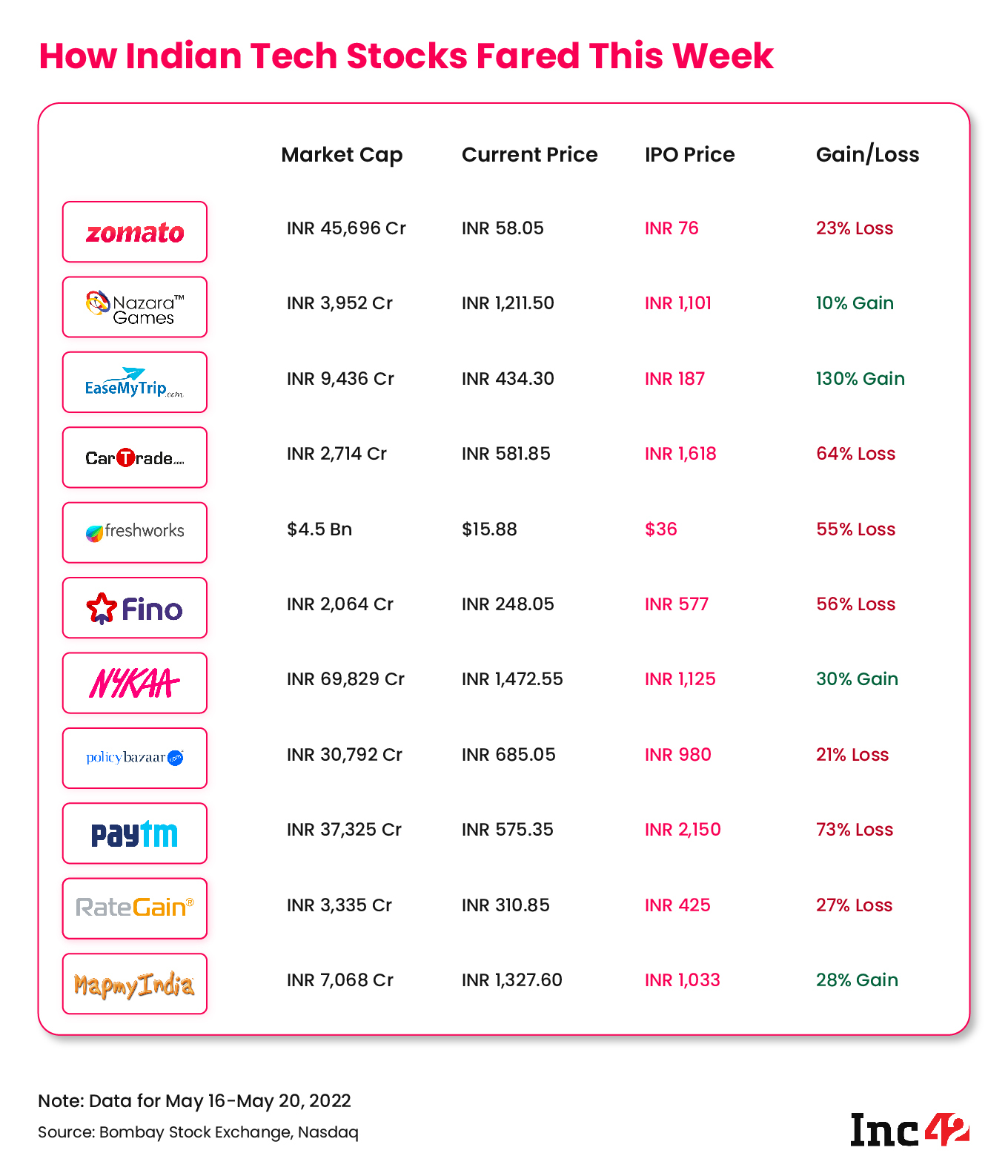 In the past week, the Indian startups managed to raise $419 Mn across 26 deals — while the funding amount is 5.8% higher than the previous week, the deal count fell by more than 20%. Yet another indication of the global slowdown that has made fundraising harder for Indian startups. 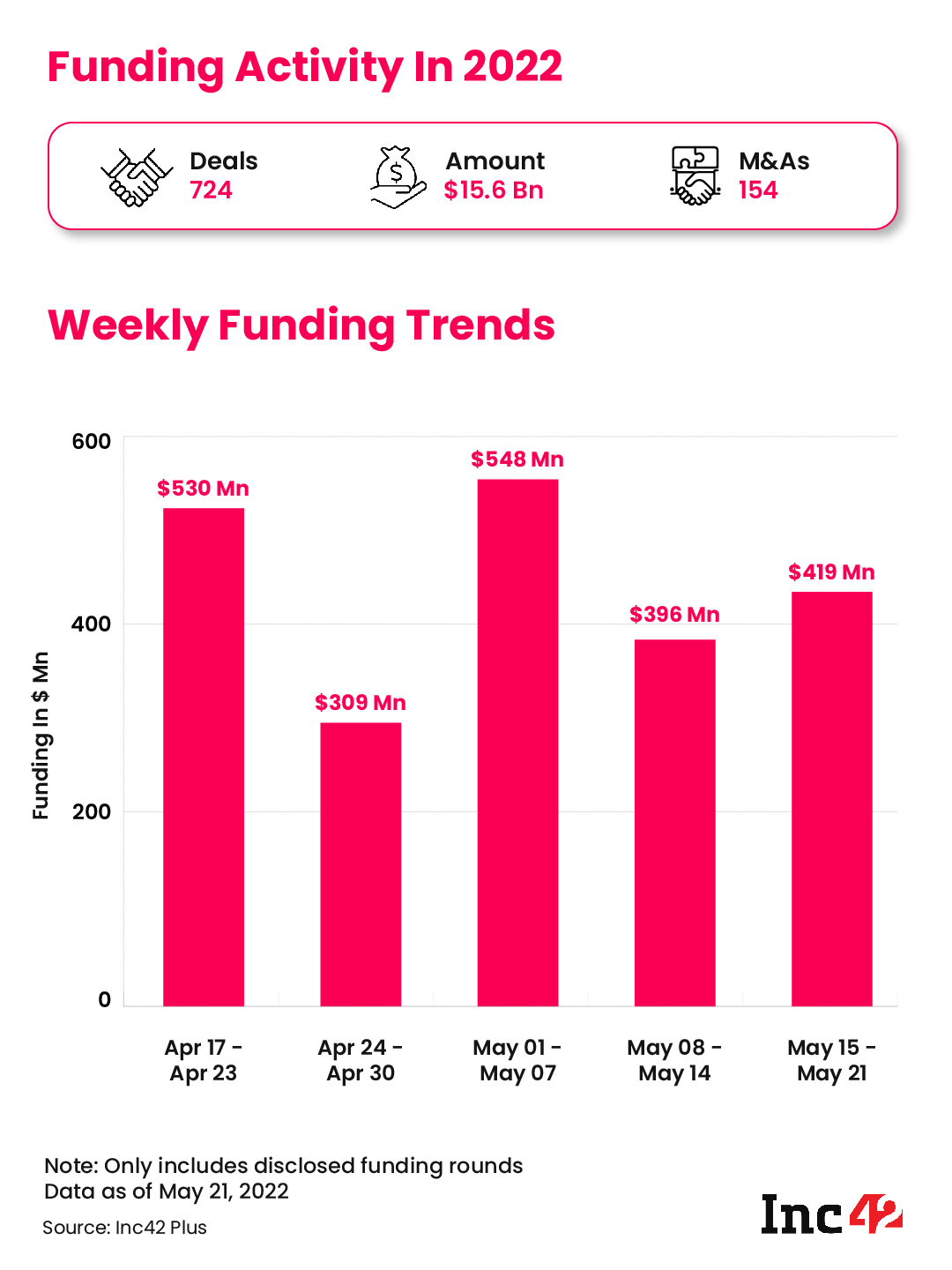 That’s all for this week. See you next Sunday with another weekly wrap-up