Edtech Vedantu To Layoff Over 400 Employees, Takes Total Count To 600+ In 15 Days 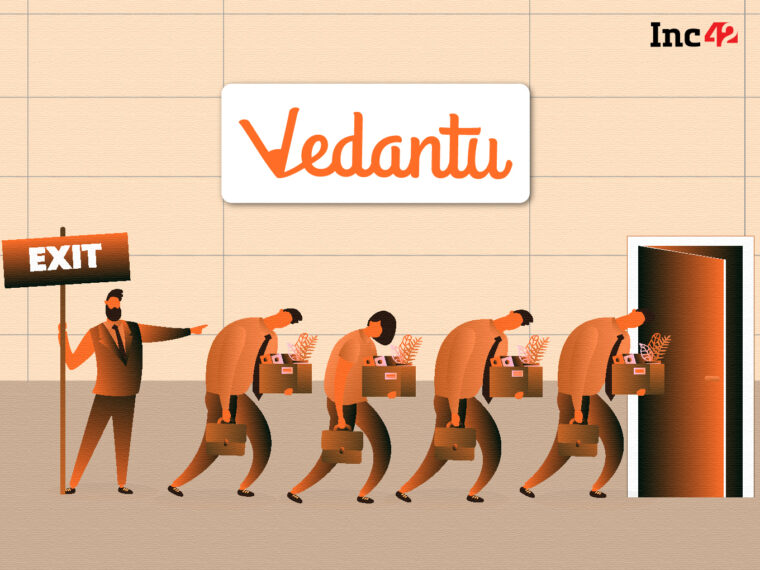 Earlier, Inc42 exclusively reported that Vedantu had laid off 200+ employees to cut costs, of which 120 were contractual and 80 were full time

Vedantu had an employee count of over 5.9K, meaning it has now fired 10.6% of the employees

The startup ecosystem has seen a lot of layoffs this year, with over 2.3K employees losing jobs in 2022

Vamsi Krishna-led Vedantu is laying off 424 employees out of its total 5,900 employees. This is in addition to the 200 employees the edtech unicorn laid off earlier this month.

Inc42 had exclusively reported the news of the startup laying off 200 employees. With the latest development, the total count of the laid-off employees has increased to over 600, or 10.6% of the total employees.

Vedantu CEO Krishna took to LinkedIn to announce the layoffs. A trailing blog showed that the fired employees are yet to know that they have been affected. The blog stated that the employees who will be moving on will receive a mail titled ‘Discussion’, post-which their managers/leaders and the HR team will have a 1:1 conversation.

The startup said it will extend health benefits for the laid-off employees and their families till August 5, 2022, and provide access to 15 doctor consultations and discounted pathology & pharmacy services through Practo till April 29, 2023.

However, the startup did not disclose the quantum of severance pay that the affected employees will receive.

Krishna also asked hiring companies and HRs to write to him or Vedantu HR to help the laid-off employees find jobs.

Krishna outlined that the war in Europe, impending recession fears and federal rate interest hikes leading to inflationary pressures and massive correction in stocks made the company take this decision.

“Given this environment, capital will be scarce for upcoming quarters. With COVID tailwinds receding, schools and offline models opening up, the hyper-growth (9X) that Vedantu experienced during the last two years will also get moderated. For the long term sustenance of the mission, V [Vedantu] would need to adapt too,” he said.

As per Inc42’s previous report, the employees, whose services had been terminated in the first week of May 2022 included both permanent and contractual. Most of the laid-off employees, with whom Inc42 spoke, said they were fired because of a cost restructuring exercise.

At that time, the Vedantu spokesperson had stated that the layoff was a ‘load rebalancing activity’ as the edtech was looking at tech intervention, restructuring of the class format and changing certain categories on the platform.

It had added that it would be hiring over 1K employees in various teams, including 100+ for similar positions.

The 600+ layoffs – all within 15 days – come shortly after Vedantu opened a new office in Bengaluru, slashed its course prices by 70% and started exploring a hybrid offline-online model.

The move aims to help Vedantu build a longer capital runway, i.e. the layoffs are a cost-cutting activity intended to save the company’s capital as it deprioritises certain teams.

Over 2.3K+ Employees In The Startup Ecosystem Became Jobless In 2022

Recently, another edtech unicorn Unacademy also let go 100s of its employees (full time & educators) after firing over 600 full-time employees and over 325 part-time workers and educators from its rolls.

Prior to Unacademy, another edtech startup Lido had laid off over 150 employees after it failed to secure a funding round.

In February 2022, bookkeeping startup OkCredit laid off around 40 employees as it intended to focus on its financial services.

Meesho, Trell and Furlenco are a few more startups that have seen layoffs this year.