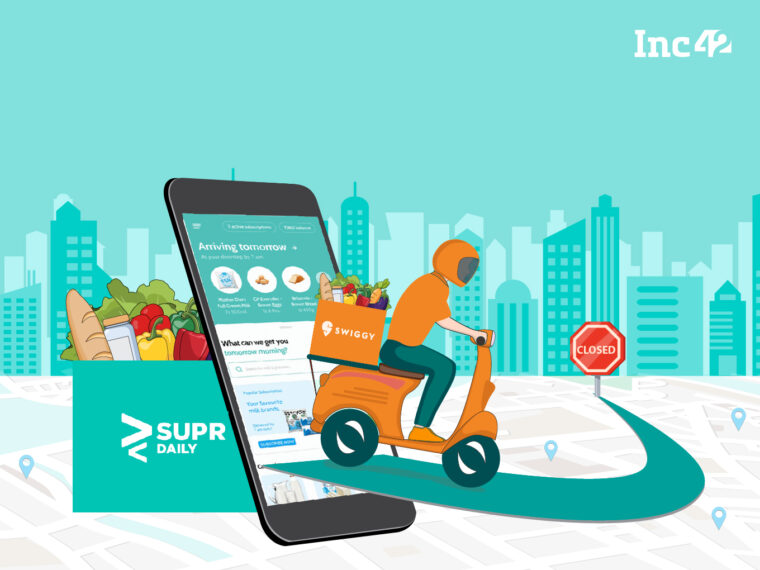 Swiggy has informed its customers that it will be suspending its operations from May 12, 2022 in multiple cities.

The startup informed its customers that it will be suspending its operation from May 12 in five cities, including Delhi-NCR region.

“As a part of the restructuring, Supr Daily will suspend operations in Delhi NCR, Mumbai, Pune, Hyderabad and Chennai. We have a detailed transition and closure plan in place to make it less painful for our users as well as brand and vendor partners. We will continue to serve users in Bangalore and double down on our efforts here,” Phani Kishan Addepalli, cofounder, Swiggy & CEO, Supr Daily said in a blogpost.

Inc42 was the first to report on September 28, 2021, about Supr Daily founder and CEO Puneet Kumar quitting the startup. He was replaced by Swiggy cofounder Phani Kishan. Swiggy acquired Supr Daily in 2018.

According to the foodtech giant, Supr Daily was serving 200,000 daily orders across six cities.

The move to suspend the operations of Supr Daily seems to be part of Swiggy’s plan to pull the plug on its multiple businesses to double down on its two focus areas – food delivery and Swiggy Instamart.

Swiggy has also temporarily shut operations of Genie across major metros as it was struggling to hire delivery personnel.

A Swiggy spokesperson in a statement said that the operations of Swiggy Genie were halted in 3 out of 68 cities. The spokesperson further added that the startup has been seeing a surge in food and grocery deliveries, thus forcing it to focus on these two areas.

Swiggy competes with Reliance and Google-backed hyperlocal delivery platform Dunzo in the quick commerce segment. Zomato-backed Blinkit, and Zepto are also trying to grab a larger share of the growing quick commerce market. Former Blinkit founder Saurav Kumar’s new venture Warpli is the latest entrant in the segment as it launched the app a couple of weeks ago.