The Indian Startup Funding Story Of 2021

The Indian Startup Funding Story Of 2021

With over $42 Bn raised by startups, 2021 exceeded all expectations, and we go into some of the major takeaways 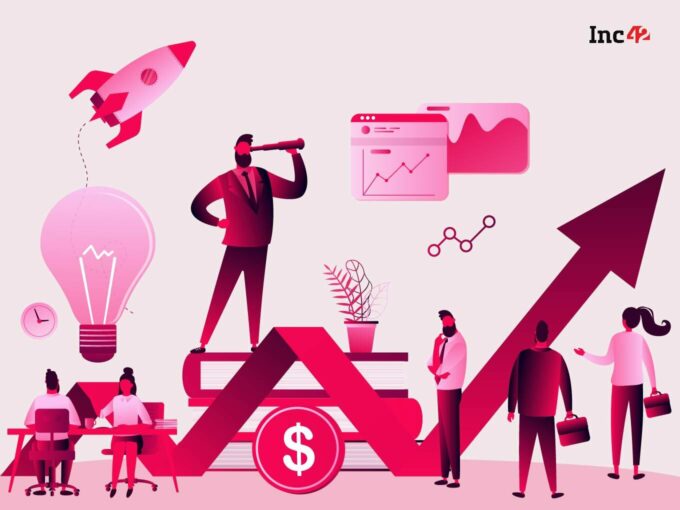 As with every year, we began 2022 by crunching the funding numbers of the year gone by. And more than any other time, this year, we have unearthed records in nearly every category.

With 1,583 deals and over $42 Bn raised by startups, 2021 exceeded all expectations, and we will go into some of the major takeaways soon. First, two stories that caught our attention:

Decoding The Funding Boom Of 2021

While there’s some talk about funding slowing down in 2022, for now, the Indian startup ecosystem is still basking in the glory of 2021. The funding secured by Indian startups in 2021 is comfortably higher than the total funding raised in the last three years combined ($42 Bn vs $37 Bn).

🔥Fintech, Ecommerce Prove Hottest: In terms of the number of deals, fintech and ecommerce were neck and neck, but when it came to the funding amount, ecommerce came out on top with a huge margin.

A New Unicorn Every 9 Days: With 42 new unicorns this year, India saw a new unicorn startup every nine days in 2021, taking the total tally to 84. We dove into each of these new unicorns on the block.

💪Mega Deals Dominate: Another record in 2021 was the number of mega deals with 108 individual funding rounds over $100 Mn, which comes up to around 8% of all deals this year.

Over $30 Bn was raised through mega deals, with an average mega ticket size of more than $280 Mn. Excluding such outliers, the total funding poured into Indian startups stood at just around $12 Bn for 2021. So in essence, just 8% of deals accounted for 72% of the funding amount.

🌱Seed Funding Grows: The total capital poured in at the growth stage recorded the biggest surge (290%) followed by late stage investments which rose by 246% from 2020. A whopping 67% of all deals were for under $10 Mn, which is the typical size for growth-stage deals.

⬆️Investor Count Up 2X: In 2021, uncertainty in the market gave way to optimism among investors. Unique investor count surged by nearly 123% from 1,114 to 2,487 this year. Overall, $6.2 Bn has been raised by 62 new startup funds from their limited partners across categories.

We are working on a deeper dive into the funding metrics of 2021 and how the investor ecosystem grew over the past year. Watch out for our full-fledged report later this month. 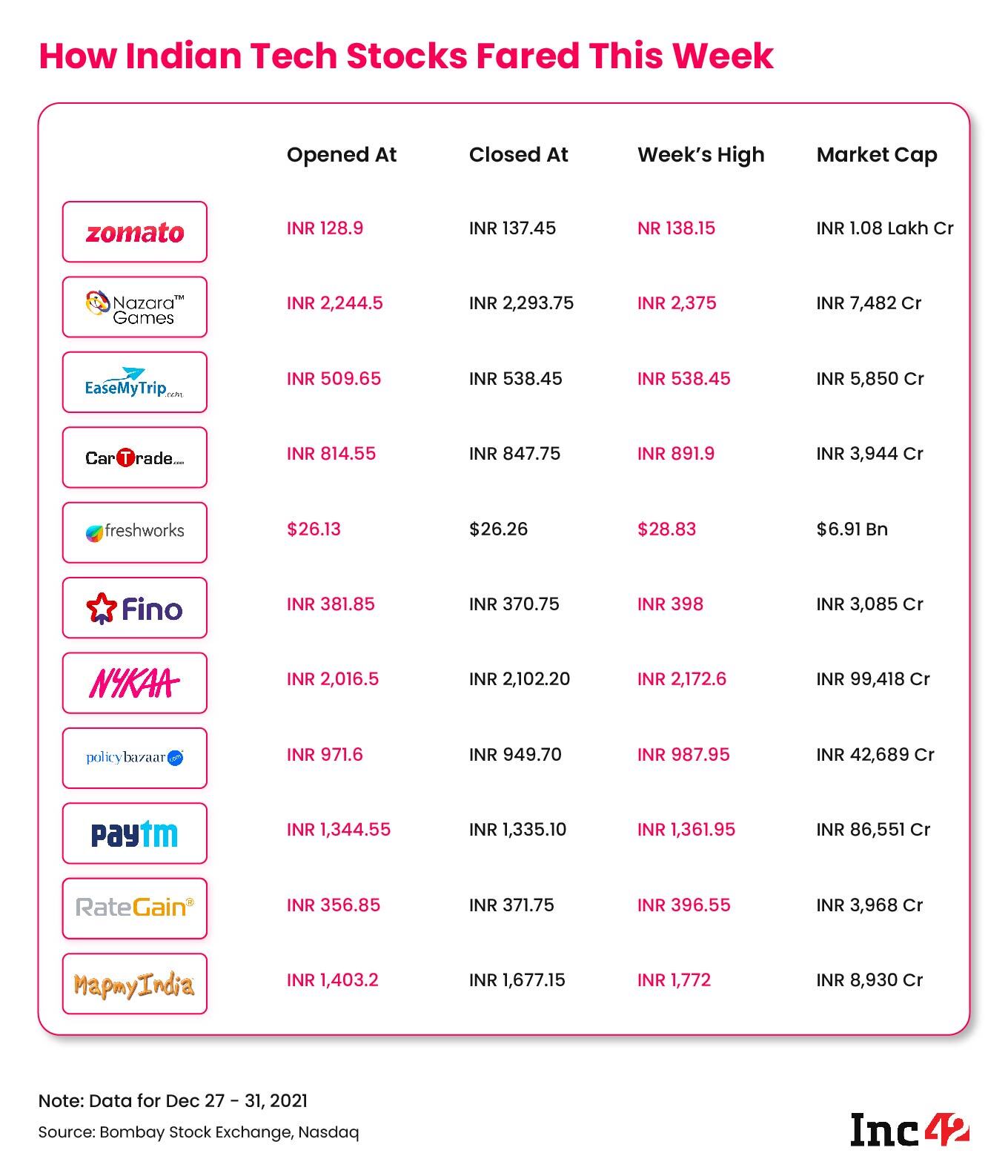 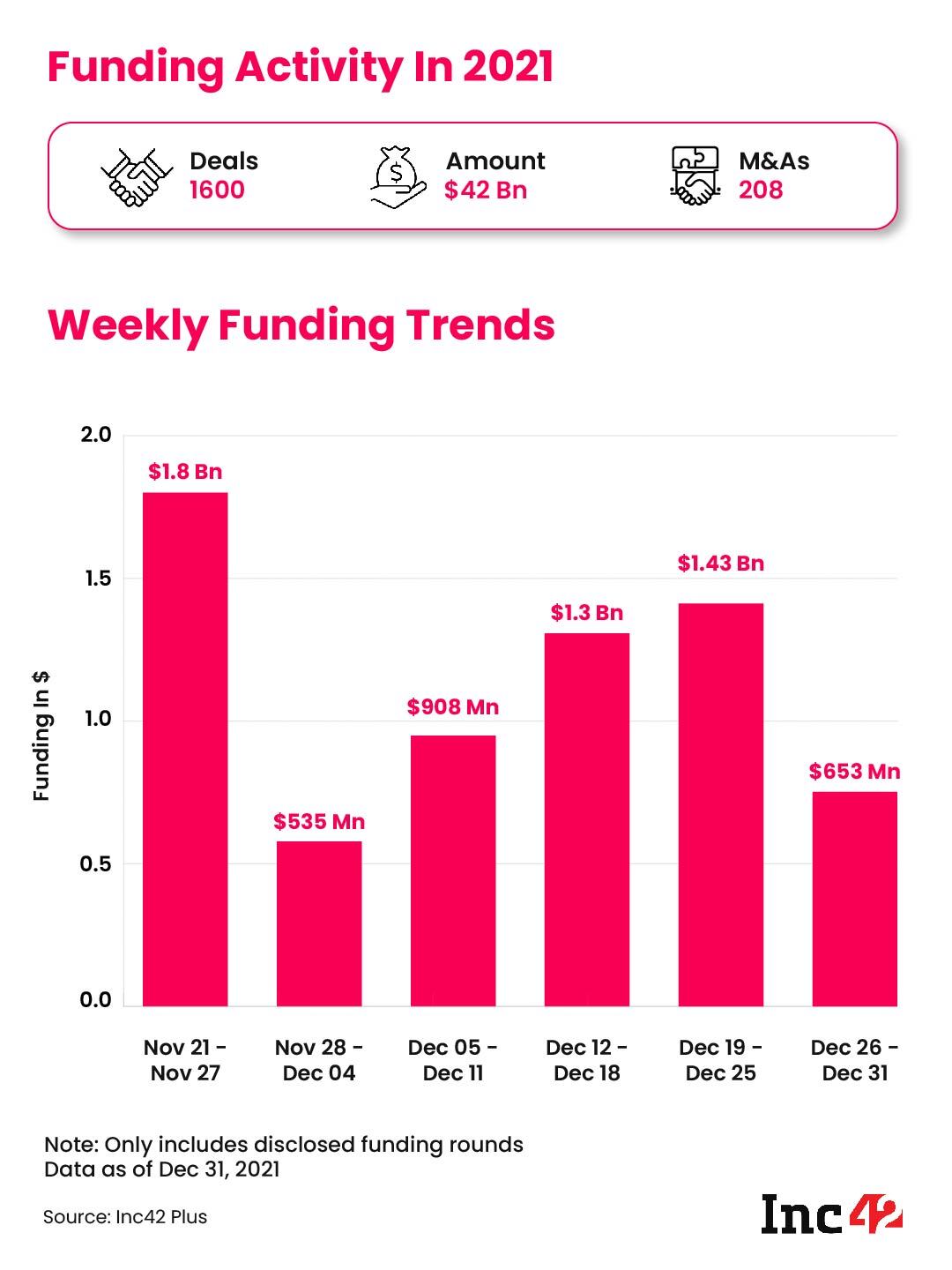 In Spotlight | Best Of Inc42’s 30 Startups To Watch

As we wrap up the ‘30 Startups To Watch’ series for 2021 and get ready to explore more vibrant and innovative startups in 2022, we decided to highlight the best of our picks from 2021.

We scoured the latest developments at over 300 startups that have featured in our watchlist between January and November 2021 to select these 30. Among the selected companies, 128 startups raised combined funding of over $396 Mn in funding since featuring on our list.

More than anything, these have shown great tenacity, brilliant execution and remarkable growth in the past 12 months. Take a look.

That’s all for this week, folks. Watch out for a more data-packed newsletter next Sunday! Have a great new year!

Till next week,
Team Inc42