The quarter saw 100 M&A deals, the most ever recorded in a single quarter as a consolidation wave swept across D2C and enterprise tech

While the funding growth paints a rosy picture, in Q1 2022, we have seen a slowdown in late-stage funding and profitability pressure on growth-stage startups leading to layoffs too

Post the funding rush of 2021, the first quarter of 2022 saw a significantly higher number of deals as well as funding amounts than the same period in 2021. As per Inc42 data, Indian startups raised more than $11.8 Bn across 506 funding deals in Q1 2022. Essentially, funding grew almost 186% this quarter compared to the corresponding period last year. The deal count also soared by a mammoth 64% in the first three months of 2022 against Q1 of 2021.

But while this growth in numbers paints a picture of a wondrous La La Land, there are other waves running through the market such as a slowdown in late-stage funding along with pressure on growth-stage startups to achieve profits and scale, while also optimising their headcount and a global decline in investments in publicly-listed tech giants with super high valuations. 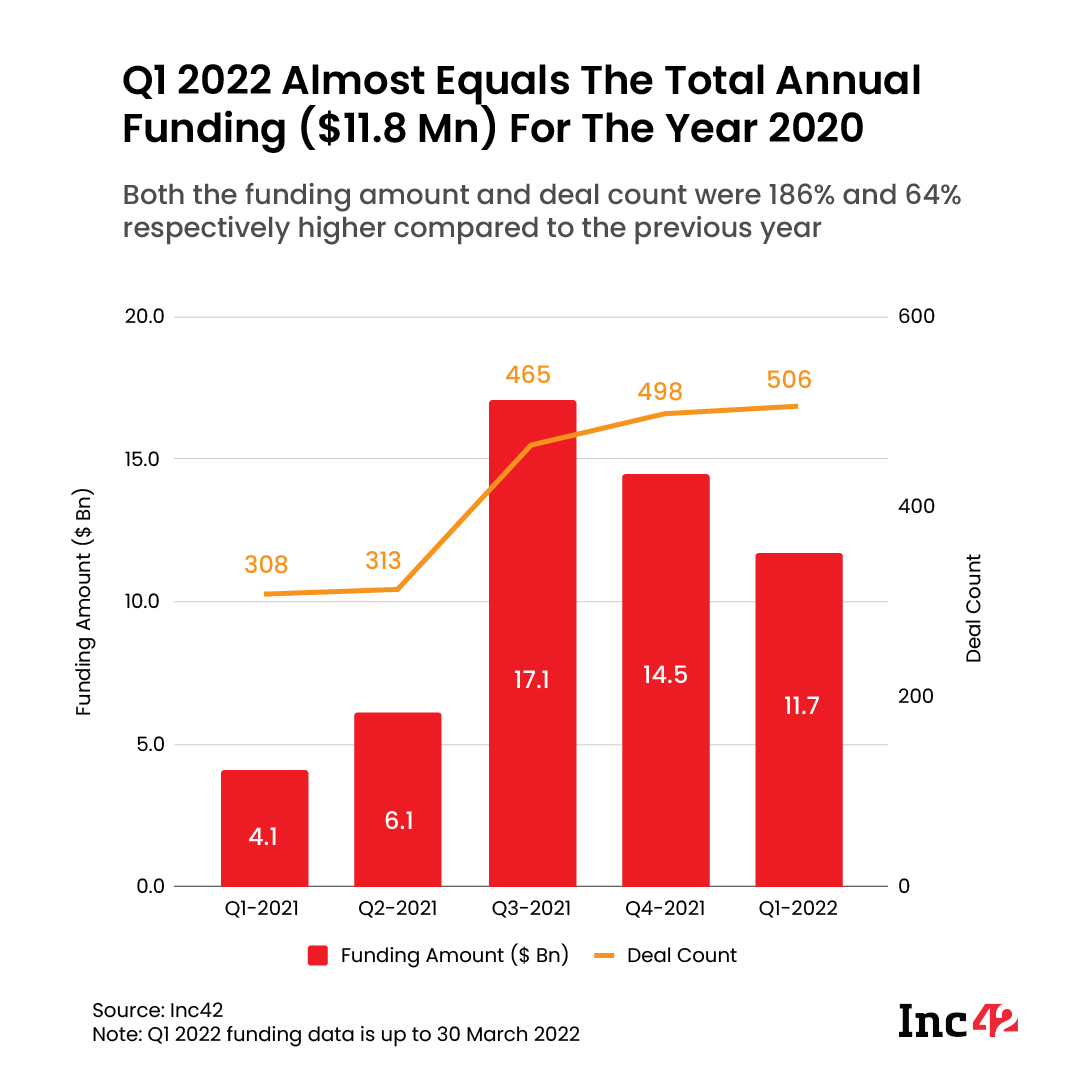 The year also saw VC and PE firms favouring early-stage startups as late-stage deals proved to be offering less attractive equity terms. Seed stage startups witnessed the highest uptick in funding, with the amount increasing 4.7X in Q1 2022 versus Q1 2021. The total investment in early startups grew from $190 Mn last March to $890 Mn this quarter. Enterprise tech, ecommerce, and fintech were the most preferred sectors for early-stage investors.

The pressure of profitability and other challenges will undoubtedly continue to impact startups through the next quarter as well, based on the indications such as layoffs and cutbacks. But we will delve into the challenges after going through the major funding numbers for the Indian startup ecosystem in Q1 2022.

Notably, close to 48% of the mega-round capital flowed into the enterprise tech sector totalling $2.8 Bn. Ecommerce startups saw $1.9 Bn being pumped into the startups. Fintech emerged as the third biggest avenue for funding, receiving $1.8 Bn in total investment inflows in the first quarter of 2022. 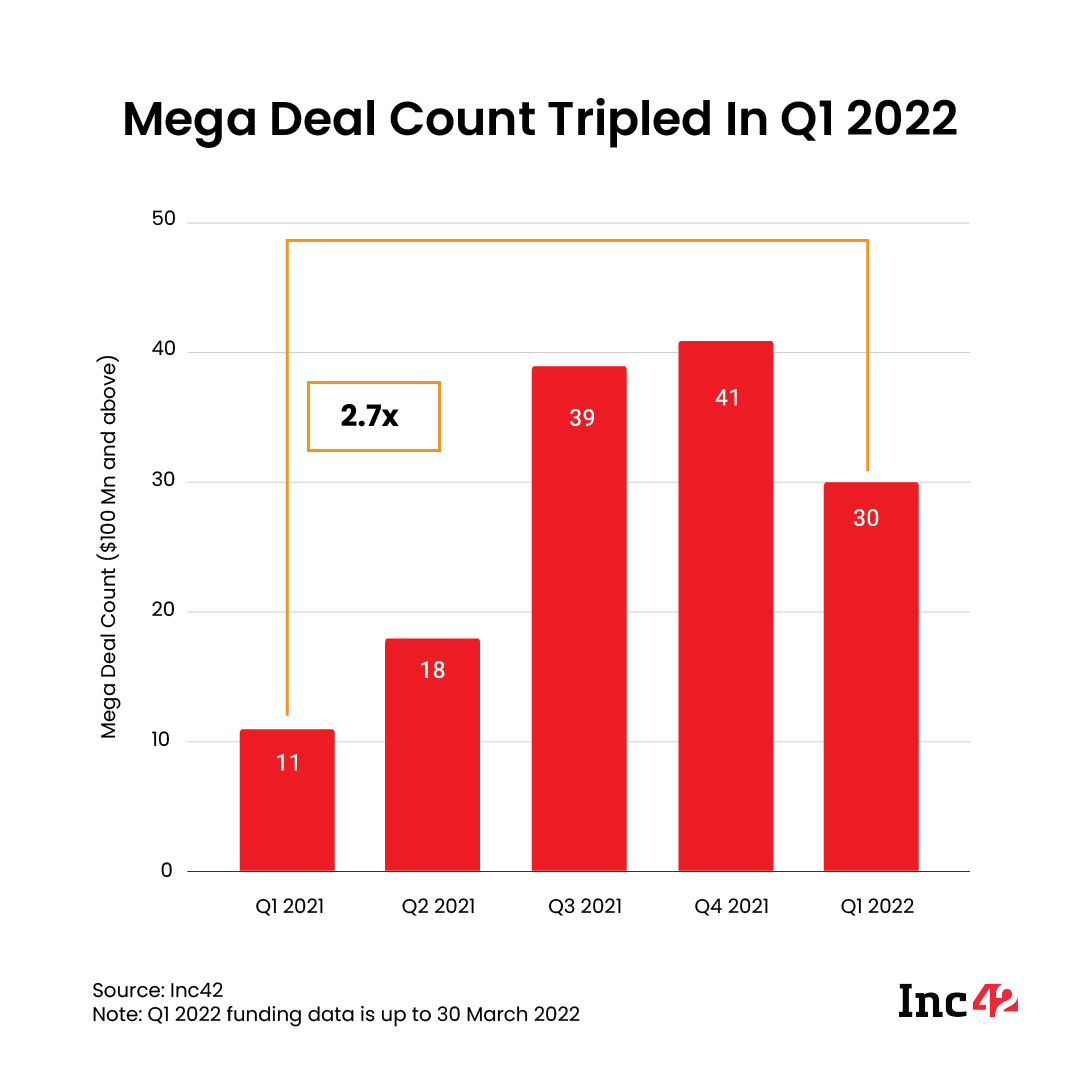 Incidentally, in Q1 2021, media and entertainment and edtech were booming in terms of mega-rounds, but are nowhere to be seen this quarter.

A Century Of M&As

This could likely be explained by a weak investor sentiment due to global sell-off pressures with foreign institutional investors still a significant source of capital for Indian startups. Plus, investors are now tightening their purse strings after funding the cash-burn of many large Indian startups for the past two years.

What also stuck out like a sore thumb were the exits. The first quarter of 2022 recorded the highest number of exits in the history of Indian startups. As many as 100 mergers and acquisitions (M&As) were recorded based on disclosed transactions by Indian startups. 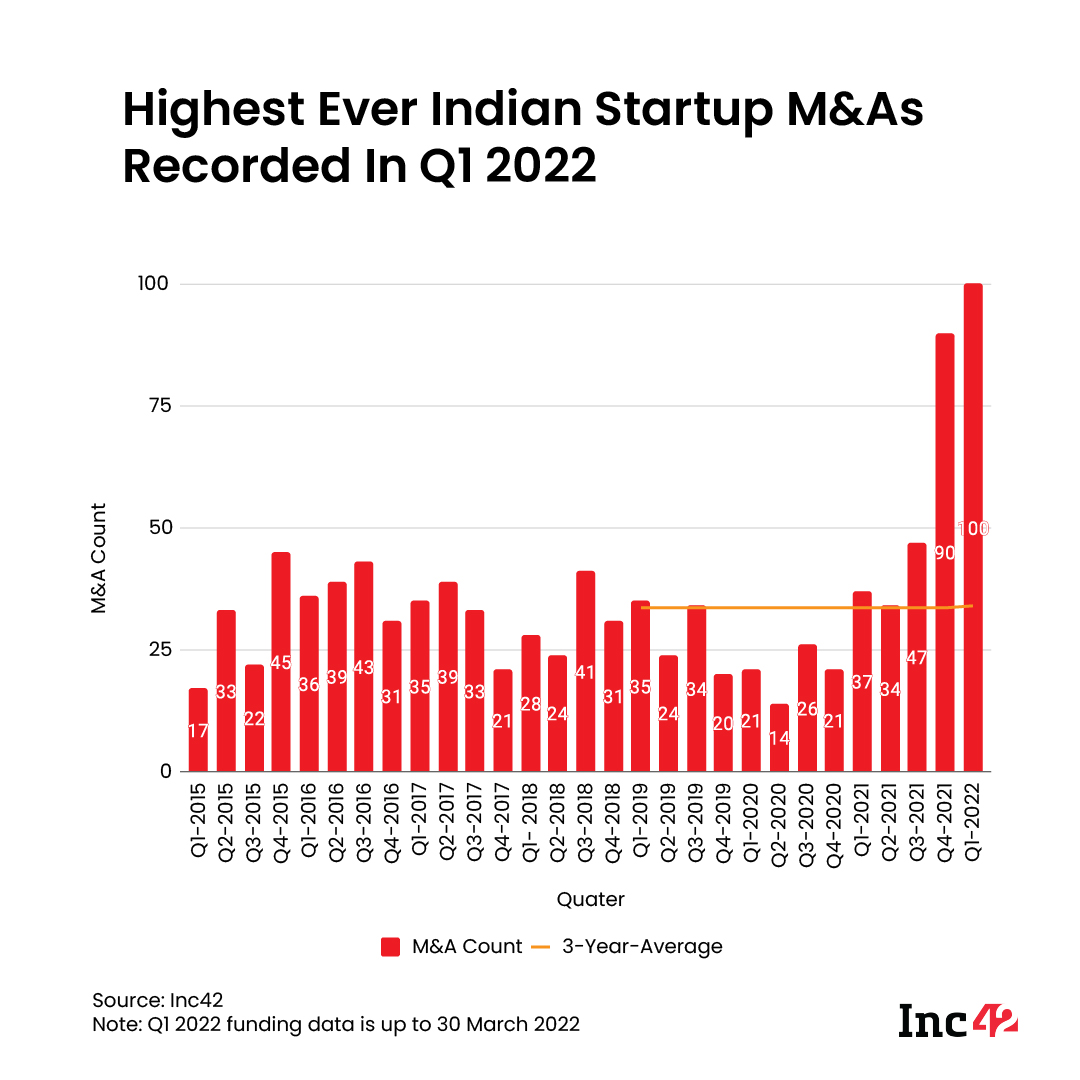 This is almost 3X the three-year quarterly average in terms of M&As. The enterprise tech sector recorded the highest number of exits, accounting for nearly 26% of the total deals. The ecommerce sector (23%) recorded the second-highest M&As as the D2C house of brands and roll-up platforms continued to gobble up smaller promising brands. Consumer services spaces also saw quite a few M&A deals, with 15 transactions recorded.

On The Verge Of 100 Unicorns

Inching further to their goal, the Indian startup ecosystem is now just one startup shy of being home to 100 unicorns. Currently, the country is home to 99 unicorns, with Games 247 becoming the latest to join this club, that’s more than doubled in size in the past 15 months. At the end of 2020, India had 42 unicorns and is now on the verge of a century.

The ecommerce sector is home to the most number of unicorns with 23 startups, followed by fintech (20 unicorns) and 16 unicorns from the enterprise tech sector. A majority of the unicorns are based out of Bengaluru. The city leads with 38 unicorns, but Delhi NCR is close with 31 unicorns, followed by Mumbai, which is home to 15 unicorns.

Beyond unicorns, according to Inc42 research, 76 startups are poised to enter the unicorn club in their coming rounds. These startups have raised $20 Bn in total funding so far since 2014. Again, fintech leads the soonicorn pack with 23 such startups from the sector.

Q1 2022 saw the most number of new unicorns on a quarterly comparison with 12 startups entering the club. This includes Amagi, DarwinBox, uniphore, logistics startup Xpressbees, fintech firm CredAvenue, Games247 among others. 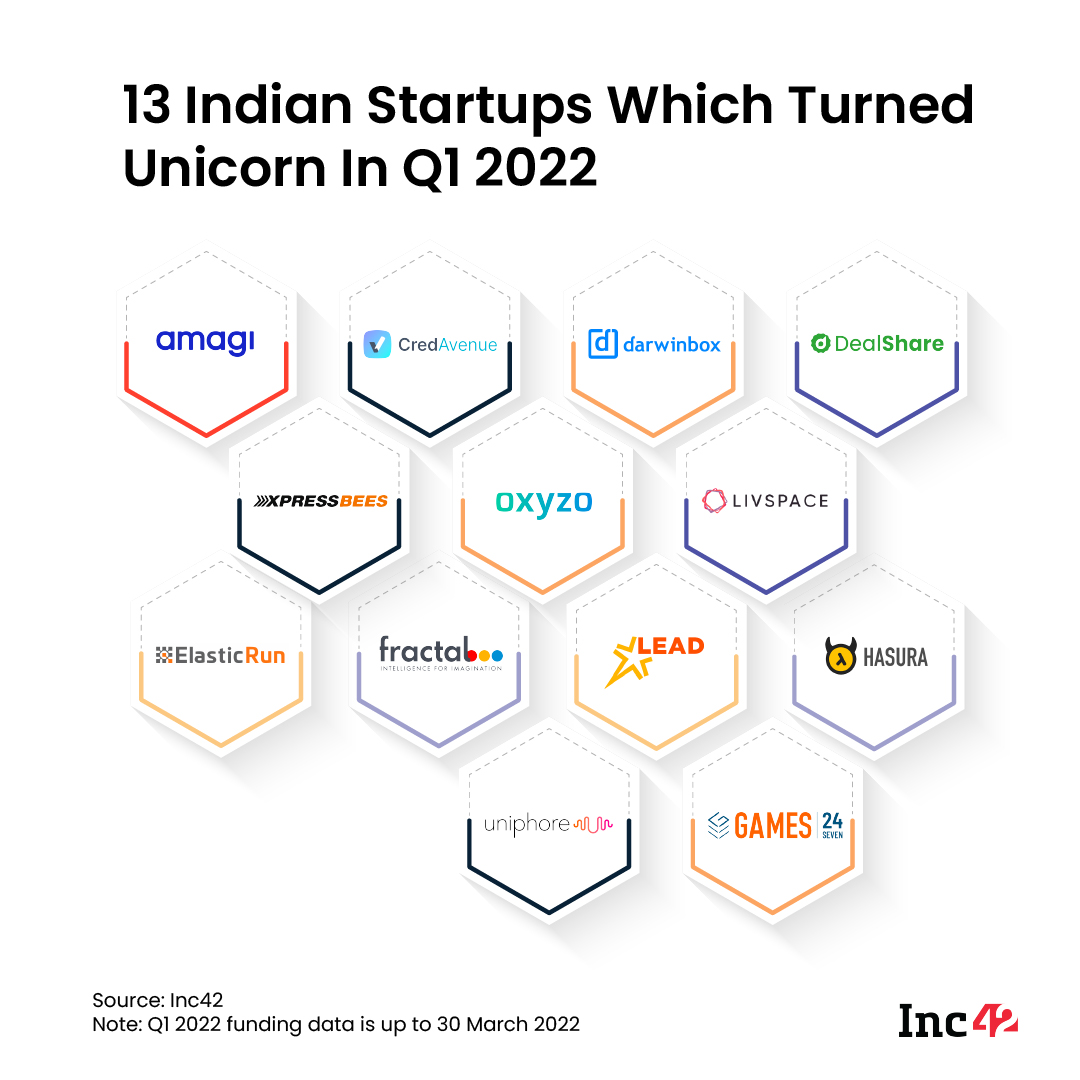 Interestingly, the funding in Q1 2022 somewhat favoured the smaller startup hubs, breaking at least some of the dominance of the top hubs — Bengaluru, Delhi NCR and Mumbai. 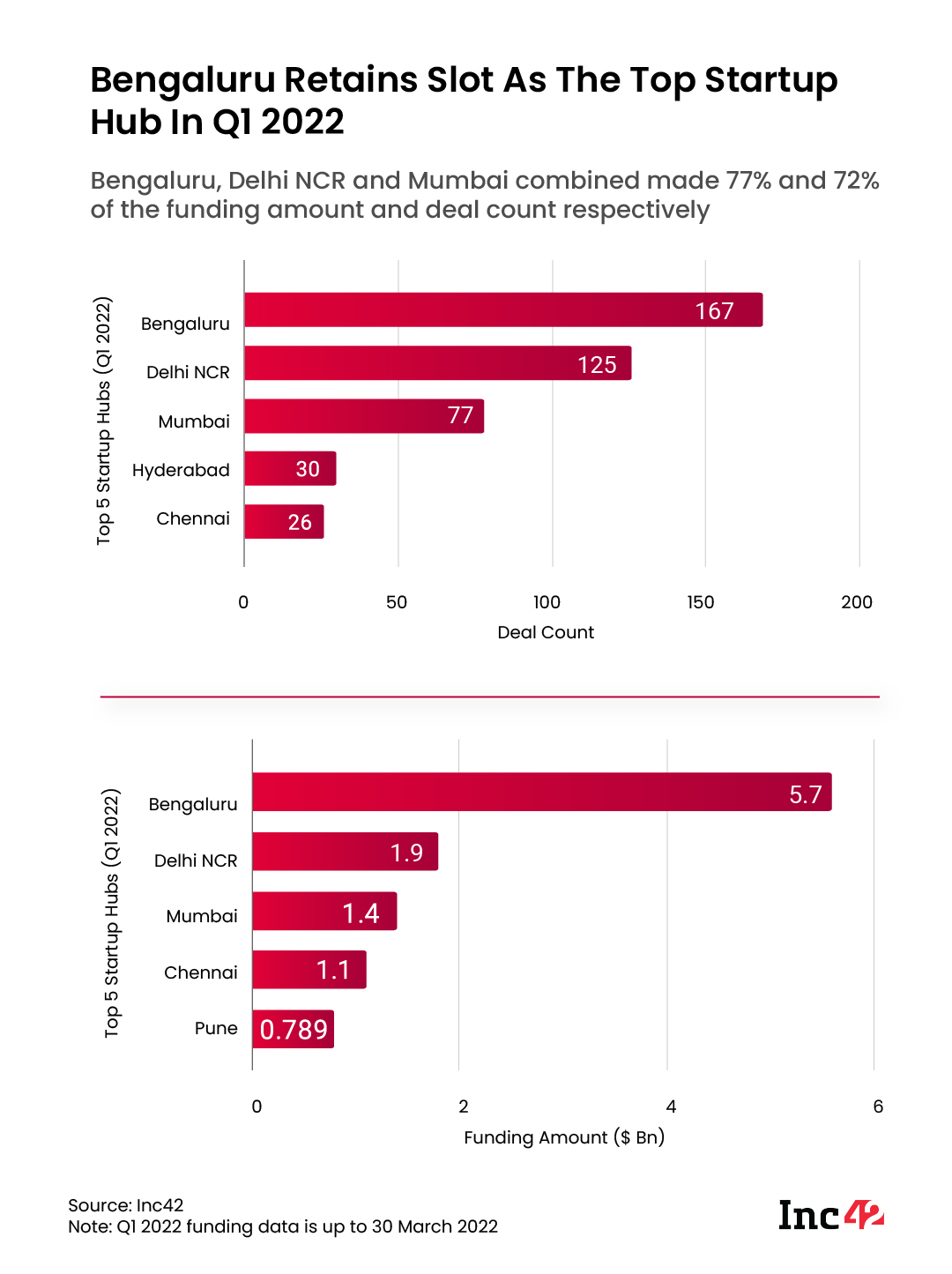 Bengaluru topped this list as startups from the city inked as many as 167 deals worth $5.7 Bn. Delhi NCR-based startups saw 125 deals bagging $1.9 Bn in funding, while Mumbai startups accounted for 77 deals and around $1.4 Bn of the funding amount.

Pune surprised with funding inflow increasing by over 653% in the first quarter of the year. Pune-based startups raised $789 Mn in total funding, led largely by XpressBees’ $300 Mn round. 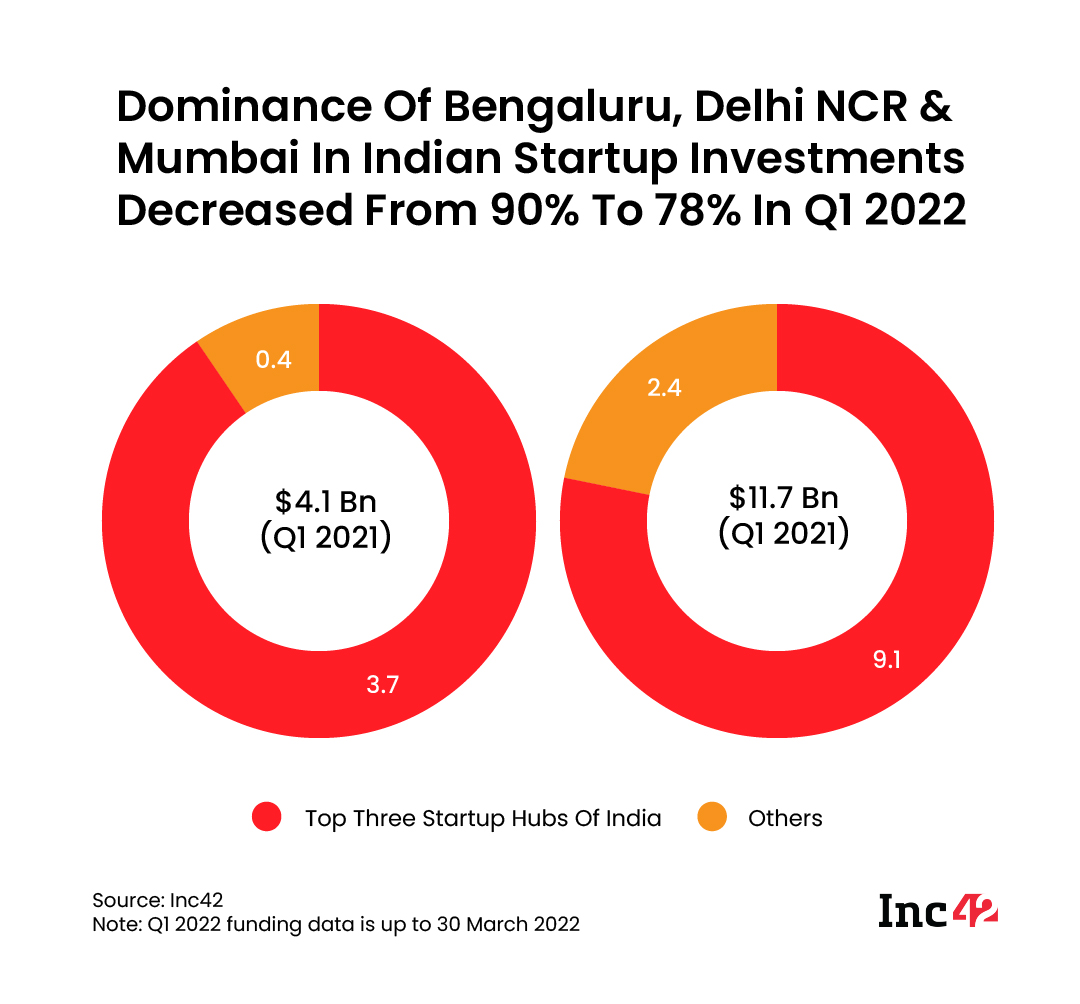 Notably, nearly 12% of the Indian unicorns are now headquartered outside the big three hubs and in emerging towns and cities. Pune leads this pack with six unicorns, followed closely by Chennai with five while Hyderabad boasts of one unicorn currently.

Are Startups Ready For Market Correction?

Funding by itself does not paint an accurate picture of the state of Indian startups. For instance, after the record highs of 2021, we might have expected startups to continue growing and scaling up in 2022, but so far layoffs and cutbacks indicate a slowdown.

With India all set to cross the so-called 100-unicorn mark, many are sceptical about the substance of these startups outside their valuation on paper. As profitability seems a long shot for many of these unicorns, their founders will have a tough job convincing investors to pump in more funds. Plus, over-abundance of cash in the market leads to reckless scaling up, which is inevitably followed by scaling down and downsizing.

Listed tech giants are facing a bloodbath and a major valuation correction. The Paytm stock for instance is down by a whopping 73% from its listing price. Continuing the trend, foodtech giant Zomato too has fallen nearly 41% since the beginning of this year. PolicyBazaar’s shares also have nearly halved in value from an all-time high of INR 1332. Is it any wonder that investors pulled out while the losses were not so bad, forcing the stock prices to plummet further?

What was supposed to be a great year has now left most startups with a bit of a sour taste. The tech stock crash has forced IPO-bound startups like Delhivery, OYO and Pharmeasy to either slash their IPO valuation or postpone the public listing.

Elsewhere, the doom and gloom of layoffs persist, but at least for now, the macro indicators of funding are still relatively healthy. It will be interesting to see how the next three months will play out for funding, startup growth and profit prospects and the public listings of tech startups.