From Karan Bajaj To Pranay Jivrajka: Founders Who Exited Their Startups In 2021

From Karan Bajaj To Pranay Jivrajka: Founders Who Exited Their Startups In 2021 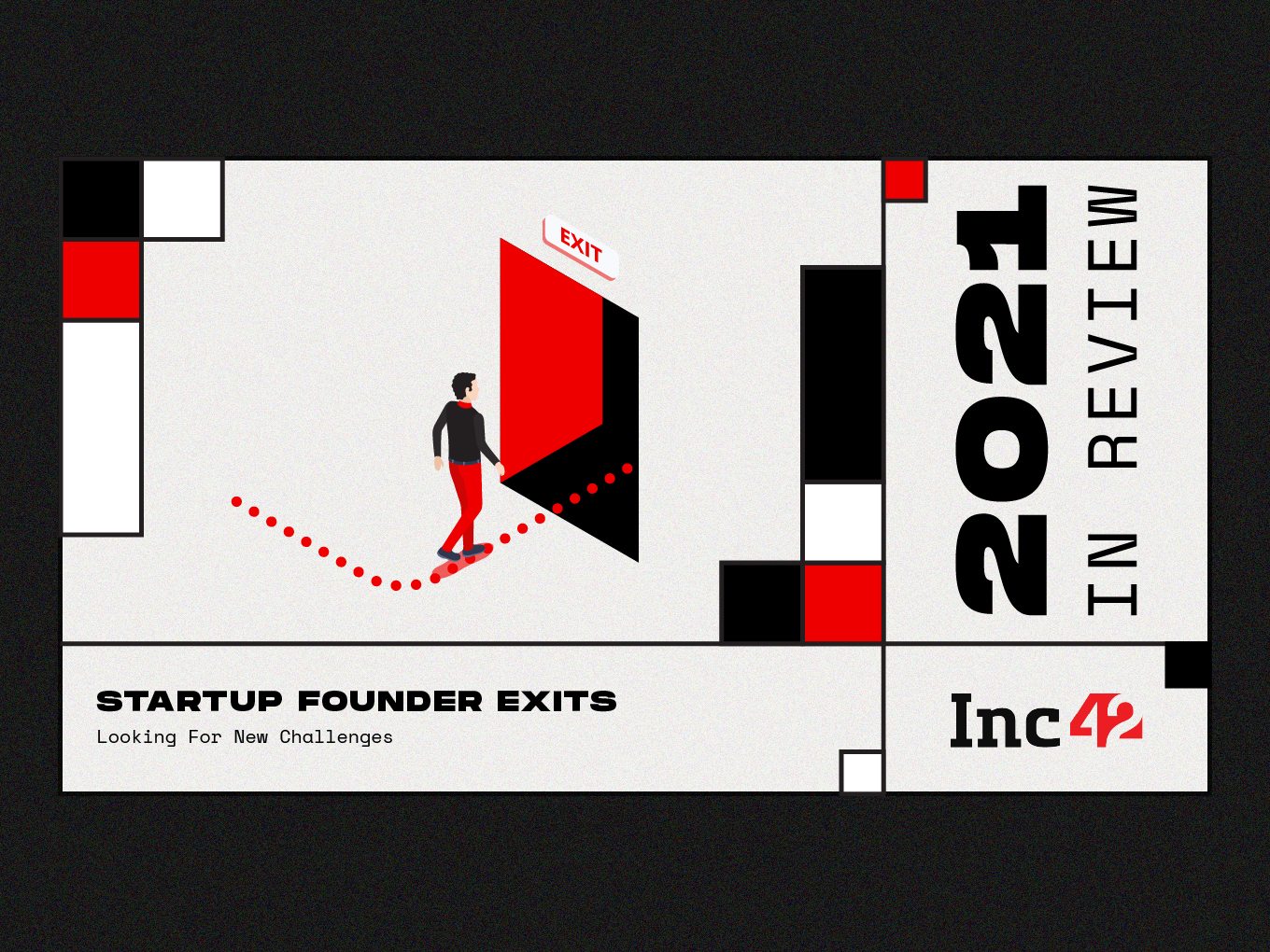 Many of the departing founders left their companies to start new ventures, while others are yet to announce their plans

As is expected, there were a number of reshuffles in companies that went public as well as those looking to go public

Amid record funding and unicorn creation in 2021, more than a dozen startup founders exited the companies they had built due to various reasons. The list involves startups such as BYJU’S (WhiteHat Jr), Zomato, Tata-owned BigBasket, Ola and other major tech companies in India, who saw cofounders exit in 2021 for newer opportunities.

Many of the departing founders left their companies to start new ventures, while others are yet to announce their plans. In other cases, there have been changes to the leadership in startups that have taken on new focus areas, which show the most growth potential. 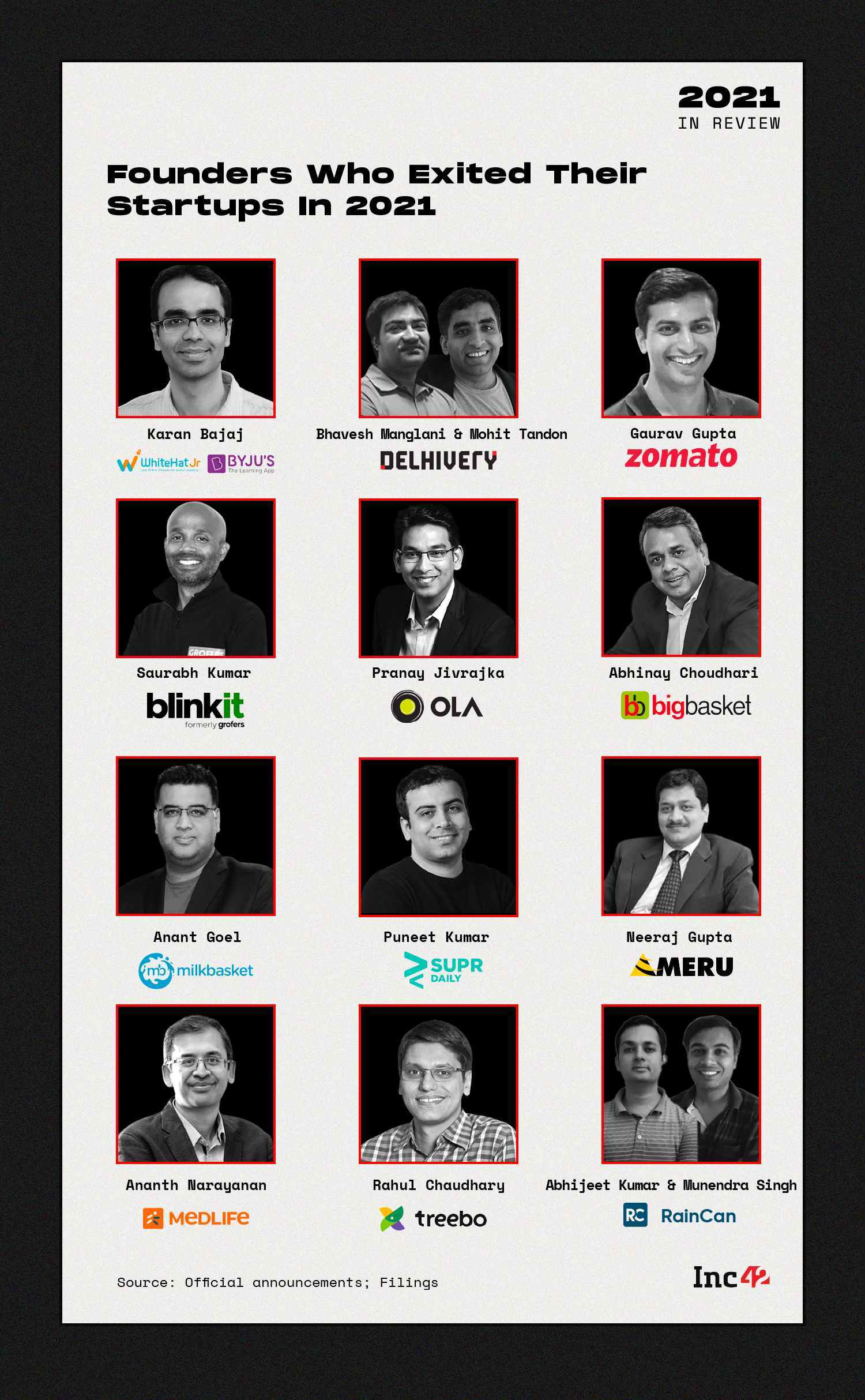 As is expected, there were a number of reshuffles in companies that went public as well as those looking to go public, while other instances of founders leaving the company were related to acquisitions.

The list of founders leaving their startups includes the likes of Delhivery’s Bhavesh Manglani and Mohit Tandon. The IPO-bound logistics tech unicorn major Delhivery saw two of its founders leave the company, with their promoter status being reclassified. The duo stepped aside from day-to-day operations of the Delhi NCR-based company, and were reclassified as retiring/non-active promoters.

Another major IPO in 2021 was Zomato, which went public in July. The food delivery giant saw cofounder Gaurav Gupta exit the company. “It’s time for me to take an alternate path in my journey. I am taking a new turn in my life and will be starting a new chapter, taking a lot from this defining chapter of my life – the last 6 years at Zomato,” Gupta, who was head of supply at Zomato, had said at the time.

Interestingly, Gaurav Gupta was elevated to cofounder by Zomato in 2019 when the company also launched its nutrition business. Incidentally, Zomato shut its nutraceuticals business this year.

Looking To Start A New Innings

A couple of notable founders quit startups they had been associated with for several years to launch new ventures.

Ola’s Pranav Jivrajka left the company as it turned its focus to the electric vehicle business in a big way in 2021. Jivrajka was one of the founding members of Ola and was CEO of its food business. Ola said that the move was a natural progression.

Jivrajka has since launched a healthtech startup, which is currently in stealth mode. The startup is building digital health clinics for affordable access to healthcare.

Before it rebranded itself to Blinkit and entered the quick commerce game late in 2021, Grofers had to manage the exit of cofounder Saurabh Kumar in June. Kumar left the company eight years after setting it up along with Albinder Dhindsa, and soon after that, Grofers got an investment from Zomato and pivoted to quick commerce from grocery delivery.

Since leaving Grofers, Kumar has launched Warpli, which claims to be working on a faster and more responsible ecommerce platform.

Startup acquisitions are always tricky, especially with founders from acquired and acquiring companies often not seeing eye to eye on many things post the deal. Or it could simply be a matter of wanting to start up again as your current startup is entering a big acquisition.

In the case of post-acquisition exits, the list is led by Karan Bajaj who had founded WhiteHat Jr which was acquired by BYJU’S for $300 Mn in August 2020.

One year later, Bajaj decided to move on to pursue interests. In an email to employees, BYJU’S cofounder Byju Raveendran said Bajaj “exceeded all” mutually outlined goals one year after the acquisition. Bajaj was replaced by Trupti Mukker, who will lead the WhiteHat Jr and BYJU’S Future School products.

Similarly, Abhinay Choudhari, a cofounder of BigBasket exited the company to launch laundry solutions startup LaundryMate. He departed the company after Tata Digital Limited acquired a majority stake in BigBasket in May this year. It is yet to start operations but claims to be setting up the largest laundry facility in India with the capacity to process 45,000 garments per day.

Like BigBasket, Milkbasket was also a target of a corporate acquisition with Reliance Retail taking over the company. CEO and cofounder Anant Goel stepped down from the startup, while other founders Anurag Jain, Ashish Goel, and Yatish Talvadia remained on the board of Milkbasket.

In the case of Swiggy, which acquired Supr Daily in 2018, saw a change in leadership too. Phani Kishan, who was elevated to cofounder at Swiggy in July this year, took over as CEO of Supr Daily after Supr Daily’s cofounder and CEO Puneet Kumar exited the food delivery giant.

From One Unicorn To Another

After seeing an exit from Medlife during the PharmEasy acquisition deal, Ananth Narayanan launched Mensa Brands, an acquisition-centred ecommerce roll-up and growth platform for digital-first and D2C brands.

Narayanan had joined Medlife as cofounder and CEO in August 2019 and looked to start something new as healthtech unicorn PharmEasy took over Medlife.

Soon after, Narayanan’s Mensa Brands became the fastest unicorn in India after raising $135 Mn in its Series B round led by Alpha Wave Ventures, Falcon Edge Capital in participation. It has already raised a total of $300 Mn in funding in six months.