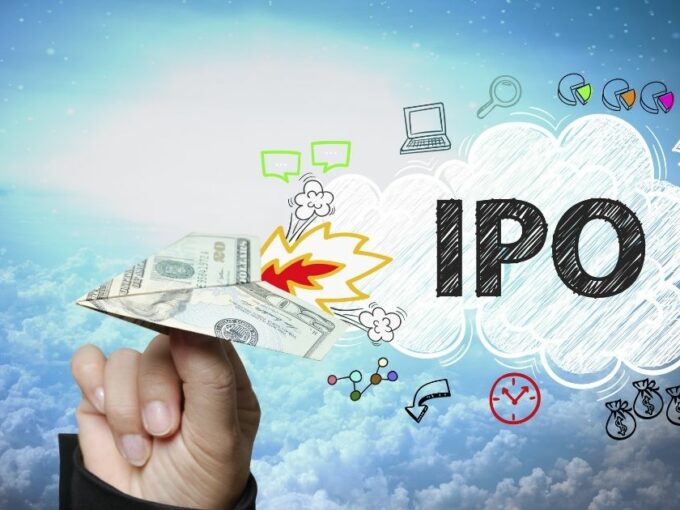 There are about 35 startup unicorns in India and just a handful of them are chasing IPOs. It’s not the case of startups not wanting to go public, the situation is infact quite contrary.

Lack of profitability is a major constraint for many startups as SEBI rules stop them from going public.

Sample this, out of the 30 major unicorns in India only ReNew Power, Zoho, Info Edge, Mu Sigma, BillDesk, BYJU’S, Freshworks, Icertis and Druva are profitable.

Even the government’s move not to mandate secondary listing for domestic firms that choose to list on overseas stock exchanges hasn’t elicited much response from the startup community yet.

In the past few months, many companies, including Mumbai-based beauty marketplace Nykaa, food delivery platform Zomato, logistics and delivery company Delhivery, insurance discovery platform PolicyBazaar, eyewear retail chain Lenskart, and edtech decacorn BYJU’S, have openly spoken about their IPO plans. The others, believed to be considering a public listing, include Walmart-owned Flipkart and PhonePe, and online bill payments platform MobiKwik.

Byju’s founder and CEO Byju Raveendran recently said that his company was quite clear about going for a public offer, but was yet to decide on the time frame.

Recent media reports suggest that ecommerce major Flipkart is preparing for an overseas listing as early as 2021. This could potentially value the firm up to $50 billion. Flipkart’s IPO, in fact, has been pending for quite some time.

Speaking to Inc42, Ankur Bansal, cofounder & director, Blacksoil said, “The primary problem is the SEBI requirement for profitability in at least three years of the immediately preceding five years. Further, unlike investors in developed economies such as the USA and Europe, Indian investors are more traditional in their approach with respect to evaluating cash burning businesses and the ability to value such companies solely on the basis of their growth prospects. There is relatively a steep learning curve required from that perspective for the Indian investors.”

He added that among the multiple factors that were pushing startups to eye IPOs included the Covid-19 pandemic.

On one hand the pandemic has also enabled wide adoption of products and services for digital first startups (both B2B or B2C models ) and on the other hand low investor confidence has forced startups to prioritise profitability over growth, resulting in fine-tuning of their business models which is resulting them becoming more scalable & nimble.

Anup Jain, managing partner, Orios Venture Partners told Inc42, “Drying up of Chinese investors has certainly hit startups as these investors were extremely active at all stages of the ecosystem. The new FDI rules and approval processes have made them circumspect about any further investments.”

On listing overseas, Bansal said, “It’s not necessarily easier list to overseas as it will entail a lot of structuring efforts from Indian startups eye IPOs in overseas markets such as US and UK not just due to friendlier regulations such as no restriction on profitability, but also to access to a larger pool of capital, sophisticated retail investors, access to forex and global recognition and footprint.”

On startups listing abroad, Pankaj Makkar, managing director of Bertelsmann India Investments reiterated, “Not particularly, depending upon where you are listing overseas it will have its own pros/cons, costs and compliance challenges. It is purely on a case-to-case basis where some companies may find it beneficial to list overseas. If you have to list overseas, unless and until the new regulations come into play, startups may have to restructure their businesses for legal purposes. While the law proposed by the Government to allow overseas listing is a welcome move, we look forward to detailed guidelines on this.”

Sticky Points In The Listing Path

A 2019 survey of Indian startups by the Reserve Bank of India (RBI) concluded that about 58% of 1,246 surveyed startups have plans to get listed on Indian stock exchanges in the next five years. But less than one-fifth (around 250) of the survey respondents had turnovers exceeding INR 1 Cr and a whopping 70% of the respondents were early stage in terms of revenue generation or younger than three years. Which means, only a fraction of the startups would meet the profitability route criteria.

Further, Inc42 Plus analysis shows that Indian tech startups prefer countries with technologically-advanced markets as well as tech-aware investors such as the US or Singapore over India for listing. Being the biggest tech hub in the world and home to Silicon Valley, the US stock market brings them more visibility and a bigger chance of winning international markets.

Here are a few startups that are planning to go for IPOs: 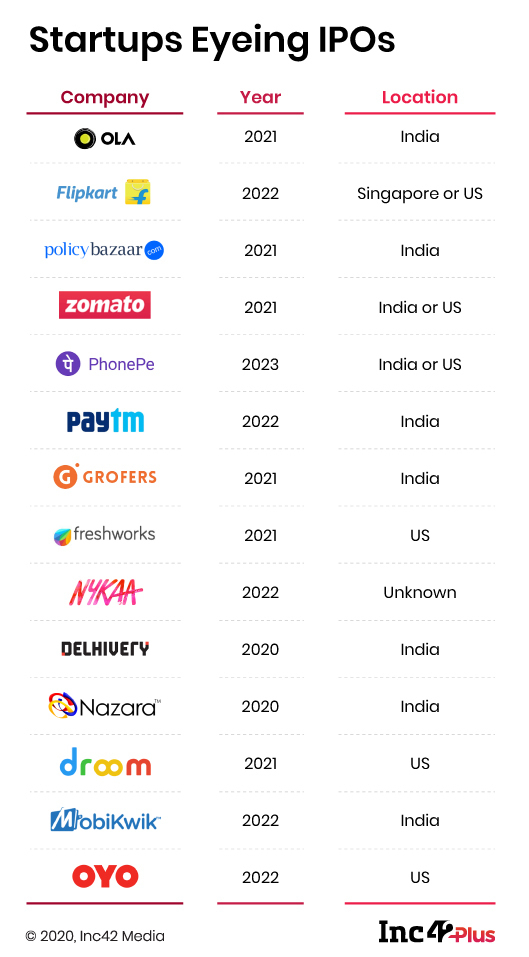 Ola– Bengaluru-headquartered cab-hailing unicorn Ola has planned for an IPO in 2021 in India. Founded by Bhavish Aggarwal and Ankit Bhati in January 2011, Ola offers its services across 250 cities in India, UK, Australia and New Zealand. The company claims to complete over a billion rides annually with its over 2 Mn drivers. Ola has raised over $3.8 Bn from marquee investors such as SoftBank, Ratan Tata, Hyundai Motor Company, Kia Motors, Sachin Bansal and others. In 2019, Ola’s parent ANI Technologies posted a loss of INR 2592.93 Cr on a consolidated level. However, this is an improvement of 8% from the loss of INR 2842.26 Cr in FY18.

Flipkart– The Walmart-owned e-commerce giant Flipkart has planned for an IPO in 2022 in US. Founded in 2007 by Sachin Bansal and Binny Bansal, the Flipkart Group includes Flipkart, digital payments platform PhonePe, fashion retailer Myntra, and a logistics and delivery service eKart. In 2018, Walmart Inc. invested $16 Bn to acquire a majority stake in the company. Flipkart claims to have crossed 1.5 Bn visits per month and reported 45% growth in monthly active users and 30% growth in transactions per customer for FY20. The value of the ecommerce company stands at $24.9 Bn. In FY19, the ecommerce company reported consolidated revenue of INR 43615 Cr, a 42% Y-o-Y increase. At the same time, its losses decreased to INR 17231 Cr, a 63% Y-o-Y fall.

PolicyBazaar– PolicyBazaar has planned to go public in 2021 in India. Founded in 2008 by IIT Delhi and IIM Ahmedabad alumni Yashish Dahiya, Alok Bansal and Avaneesh Nirjar, PolicyBazaar is owned by EtechAces Marketing and Consulting. The startup also features products from all major insurance companies in India, to help its users decide the policy which suits them the best. PolicyBazaar claims to have over 100 Mn visitors yearly and record sales of nearly 300K transactions a month.  FY 2019 turned out to be tougher for PolicyBazaar as its losses shot up 21.6x to INR 213.12 Cr.

Zomato– Indian foodtech unicorn Zomato has planned for its initial public offering (IPO) in the first half of 2021. Founded by Deepinder Goyal and Pankaj Chaddah in 2008, Zomato is an Indian restaurant aggregator and food delivery start-up. Its revenue performance was strong in FY 2020, growing 105% from the previous year. Over the same period, however, the company’s losses grew by 47%. In the first quarter of 2020-21, the current fiscal year, the company’s earnings stand at $41 Mn while the losses stand at $12 Mn.

PhonePe– Walmart-owned digital payments platform PhonePe is reportedly working aggressively to go public by 2023 as a separate entity in the US or India, eyeing a valuation of $7 to $10 Bn. PhonePe will finalise between India or US initial public offering (IPO), based on the market conditions. PhonePe is a UPI-based app that allows you to transfer money without sharing any details.

In FY2019, PhonePe had reported a loss of INR 1904.72 Cr. In terms of revenue, the company raked in INR 245.8 Cr in FY19, a 401% growth compared to INR 49 Cr in the previous year. The FY20 earnings are yet to be released. PhonePe claims to have over 175Mn users and provides them with its “super-app”, which integrates over 90 digital apps such as Goibibo and Oyo.

Paytm– Paytm has planned to go for an IPO in 2022 in India. Paytm claims over 50 Mn monthly active users, and its primary app, which allows users to transfer funds, make payments and store money in the Paytm wallet for purchases. Paytm has managed to increase its revenues to INR 3,629 Cr with 40% reduction in losses in the financial year 2020, ending March. In FY2019, the company had recorded a loss of INR 4,217.20 Cr on a consolidated basis and INR 3,232.01 Cr in revenue.

Grofers– Softbank-backed Grofers has advanced its plans to go public by the end of 2021. The company closed the financial year with a revenue of INR 2,500 Cr and its valuation is estimated to be around INR 6K Cr without elaborating on it further. Notably, Grofers’ had clocked in INR 83.62 Cr in revenue, representing an 56.5% year-on-year (YoY) increase, in FY19. The company was founded in 2013 by IIT graduates Albinder Dhindsa and Saurabh Kumar.

Freshworks– Freshworks was planning an initial public offering (IPO) by 2021. Founded in 2010 as Freshdesk by Mathrubootham and Shan Krishnasamyas, the company claims to have over 150K clients across the world which uses Freshworks’ software product suites. Its clients-base include companies such as the NHS, Honda, Rightmove, Hugo Boss, Citizens Advice, Toshiba, and Cisco, among others. The listing is expected to be on New York-headquartered stock exchange, NASDAQ.

Nazara Technologies– Game developer and publisher Nazara Technologies will launch its IPO in early 2020. Nazara claims to reach a total of 100 Mn monthly active users in India. Founded in 2000 by Mittersain, Nazara Technologies is a global gaming and sports media company, which also runs its own seed fund for investment in the gaming and sports ecosystem. The company claims to have business operations in 64 countries including multiple emerging markets. The company has received a total funding of INR 539 Cr, including investors such as Turtle Entertainment GmbH, the IP owner of the world’s largest esports franchise (ESL), IIFL Special Opportunities Fund and Rakesh Jhunjhunwala.

Droom– Droom plans to get listed on Nasdaq in 2021 through its Singapore-based holding entity, and could also look at a possible Hong Kong stock exchange listing post the Nasdaq IPO. Droom was founded in April 2014 by Sandeep Aggarwal along with Rishab Malik. The Droom automobile marketplace follows all four business models i.e. B2B, B2C, C2C, C2B. The company’s revenue from operations shows a year-on-year jump of 103%, growing to Rs 136.43 crore in FY19 from Rs 67.27 crore in FY18.

Mobikwik– Gurugram headquartered fintech company Mobikwik plans to get listed by 2022. Founded in 2009 by Bipin Preet Singh and Upasana Taku, the company has gone from being a digital wallet to a horizontal fintech platform that offers multiple financial services to its platform including credit, insurance, gold loans. MobiKwik claimed to disburse 19 lakh loans via its Digital Credit Line, which disburses money instantly to the user’s wallet. The company ventured into the mutual fund space with the acquisition of Mumbai-based Clearfunds.  Mobikwik’s annual report 2019-20 revealed that the fintech company’s revenue grew 133% year-over-year to INR 379 Cr, while EBITDA loss was reduced by 63% year over year to INR 45 Cr.