PhonePe Looks To Go Public Even As Twitter Calls For ‘Uninstall’

PhonePe Looks To Go Public Even As Twitter Calls For ‘Uninstall’ 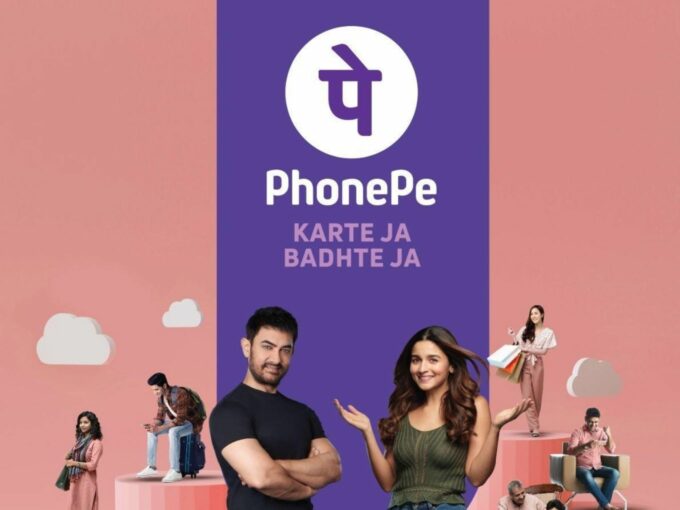 Walmart-owned digital payments platform PhonePe is reportedly working aggressively to go public by 2023 as a separate entity in the US or India, eyeing a valuation of $7 to $10 Bn. PhonePe will finalise between India or US initial public offering (IPO), based on the market conditions. Meanwhile, a person close to the matter said that Flipkart plans to go public by 2022 in the US.

Interestingly, a Morgan Stanley report published last year had valued PhonePe at $7 Bn. It had highlighted that the company could be worth as much as $20 Bn in the bull case, especially due to the growing potential of the company beyond just payments. Reports last year also stated that PhonePe might be spun off into a separate business, with Flipkart planning to launch another payments vertical.

According to a Business Standard report citing sources PhonePe has been looking to diversify its portfolio after the government’s zero MDR (merchant discount rate) rule which leaves very little revenue potential in UPI alone, and this remains a key aspect of the company’s plan to go public. “The company is partnering and providing value-added services to kiranas and onboarding merchants,” a source was quoted as saying.

Further, in the last four months, PhonePe has added six products in insurance and wealth management. The company said it became the fastest-growing insure-tech distributor in India, and mutual funds (MFs) have seen investment from more than 5,000 cities.

Phonepe founder and CEO Sameer Nigam told the publication, “Since January, we have been launching a wide range of financial services products in all these categories and will continue to innovate, scale-up, and positively disrupt these sectors.”

The report also noted that Walmart’s leadership team has asked PhonePe and Flipkart about building the ‘path to profitability’, and PhonePe has set a target of 2022 for the same. In its last released financial results, in FY2019, PhonePe had reported a loss of INR 1904.72 Cr. In terms of revenue, the company raked in INR 245.8 Cr in FY19, a 401% growth compared to INR 49 Cr in the previous year. Its expenses grew 156% on a Y-o-Y basis reaching INR 2153.2 Cr in FY19. The FY20 earnings are yet to be released.

Even as PhonePe plans its path to profitability and to go public, consumer sentiment is something the company needs to be taken into account too. The digital payments platform recently released its latest ad campaign featuring Bollywood actors Aamir Khan and Alia Bhat in the hope to attract more customers, but the campaign ended up back firing.

On the weekend, #UninstallPhonePay (Uninstall PhonePe) has been trending on Twitter due to the involvement of the two actors, with separate controversies fuelling the trend. While negative sentiment against nepotism in Bollywood and Bhat seem to have risen after the death of 34-year-old actor Sushant Singh Rajput, Khan’s recent visit to Turkey and meeting with the Turkish first lady Emine Erdogan has caused concerns. 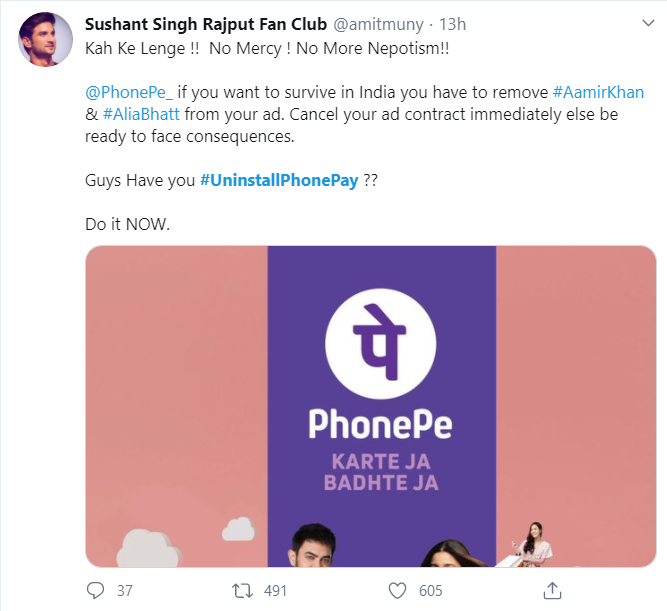 Users have also started downrating the app on Google Play Store as well, where it has an average rating currently of 4.4 stars. It remains to be seen whether this has any impact on the usage and adoption of PhonePe.