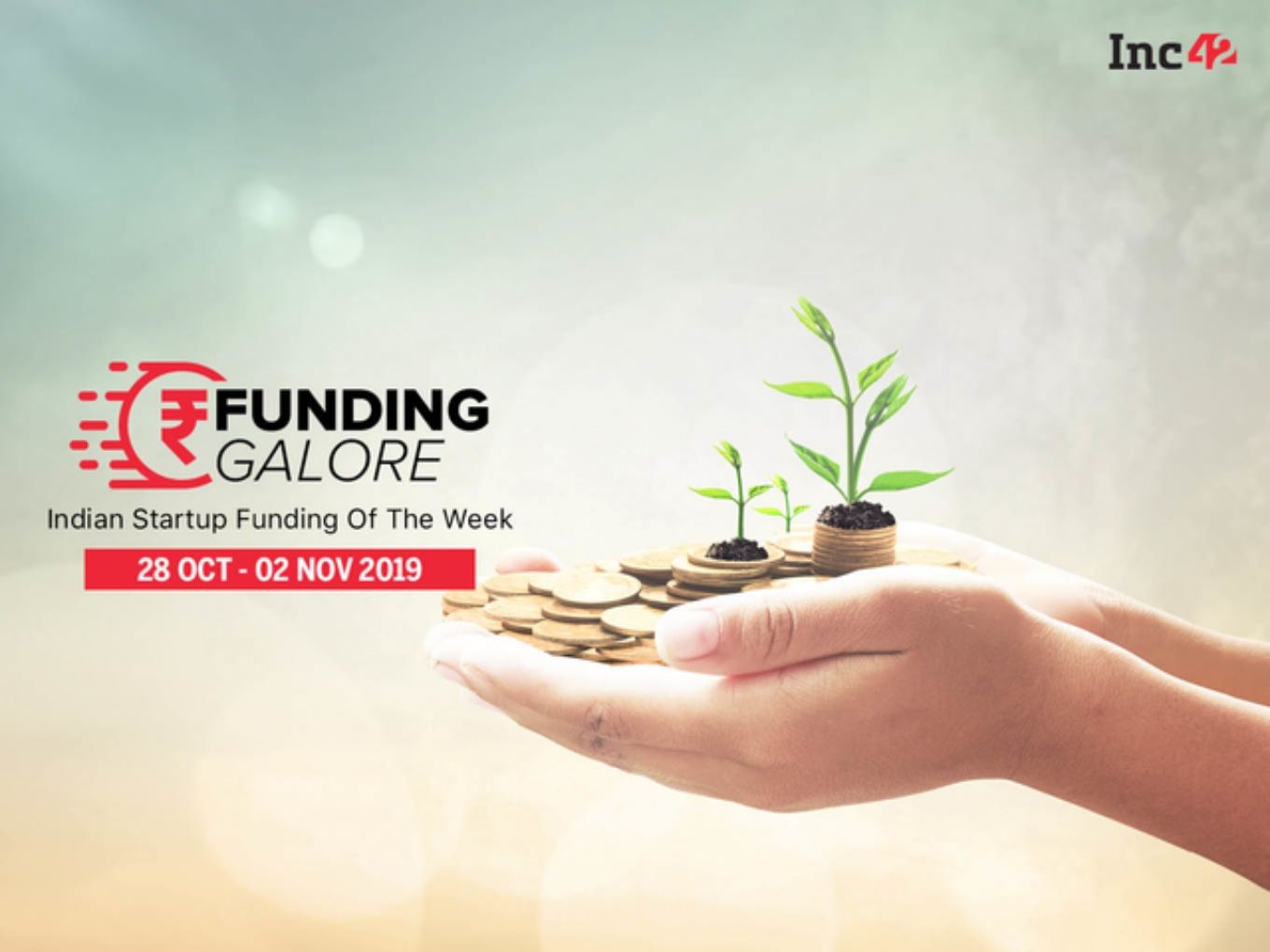 In one of the biggest funding rounds this week, Times Internet-owned OTT platform MX Player raised $110 Mn (INR 775 Cr) funding round led by Tencent and its parent entity, Times Internet. The company plans to utilise fresh investments to strengthen its content portfolio by acquiring and producing original video content. MX player claims that it has around 280 Mn monthly active users globally with a presence in over 200 countries.

Overall, this week 12 startups raised around $255.02 Mn funding and three startup acquisitions took place in the Indian startup ecosystem. (This funding report is based on startups that disclosed funding amount).

Grofers: Gurugram-based online grocery delivery company, Grofers, has raised $20.12 Mn capital from Bennett and Coleman Private Limited (BCCL), also known as Times Group. According to the Ministry of Corporate Affairs filings accessed by Inc42, the company on October 23 issued equity share as well as a warrant to BCCL. The details showed that BCCL has picked up one equity share worth $18.3K (INR 13.05 Lakh) and a warrant worth $20.12 Mn INR (142.62 Cr).

Shuttl: Bengaluru-based bus aggregator startup Shuttl raised $42 Mn (INR 297 Cr) in a Series C funding round from Toyota Group’s trading arm Tsusho Corporation and SMBC Trust Bank Ltd, acting as a trustee of Mirai Creation Fund II, among others. With this funding, the Bengaluru-based company will be valued at $213 Mn. Shuttl allows its users to book bus seats by choosing the pickup and drop point through its app. The company serves over 60K rides daily and operates 1200 buses on over 150 routes.

ElasticRun: Pune-headquartered logistics startup ElasticRun raised a fresh round of $40 Mn. The investment was led by Prosus Ventures (formerly Naspers Ventures), with participation from existing investors Avataar Ventures and Kalaari Capital. The startup is planning to use the fresh funds to expand its network coverage to new geographies and expand in additional categories.

Smartworks: Noida-headquartered shared workspace provider Smartworks has raised $25 Mn in a fresh funding round from Singapore-based real estate company Keppel Land. The startup plans to invest the funding amount in building up its next-generation product, improving client experiences, as well as boosting the talent and technology.

Fisdom: Bengaluru-based wealth management startup Fisdom has raised $11 Mn in a funding round led by international payments service company PayU. The investment came in a funding round, which also saw Fisdom’s current investors Saama Capital and Quona Capital as other participators. The startup assists users to make financial and investment decisions for long-term planning. Besides advising, the platform also allows users to register, transact and track the performance of their investment funds. With the new funds, the company plans to launch a new product suite and also double its headcount by 2020.

Fasal: Bengaluru-based, agritech startup, Fasal raised $1.6 Mn seed funding led by Omnivore and Wavemaker Partners. The startup will use the funding to build artificial intelligence (AI) capabilities for each horticulture value chain where the company finds its forte. Fasal also plans to expand its B2B sales force, engineering and product teams, which will partner with aggregators, exporters, and processors in each horticulture value chain to access its networks of farmers.

Fireflies: Hyderabad and San Francisco-based Fireflies has raised $5 Mn in its first funding round led by Canaan Partners. The B2B-focussed startup takes an AI-heavy approach for its meeting recorder. In particular, Fireflies is looking to help streamline sales calls, recruiter interviews, customer success meetings, management meetings and user interviews. The company plans to utilise the funding to strengthen its machine learning and infrastructure teams and will be ramping up hiring for the same.

Infurnia: Bengaluru-based architecture and interior design software platform Infurnia raised $200K in a round of funding from a group of angel investors. The round values the startup at $5 Mn, taking the total capital raised by the company to $760K. With this round of funding, Infurnia aims to strengthen the architecture design product as well as expand the user base in the interiors and modular kitchen industry.

Lawyered: Delhi-based legal-tech startup, Lawyered, raised $100K from a number of angel investors such as Pramendra Tomar (Group General Counsel, Apollo International Limited), Ratish Pandey (ex-General Manager, Bose Corporation), Munish Bhatia (ex-CSC and GM, IAC), and Sumit Aggarwal (Owner, Rainbows). The startup will use the funds to support product development, which will enable sustained discoverability for its customers. This funding will also drive the expansion of the market base of the company and fuel further partnerships and collaborations.

goStops: Delhi-based traveller hostels chain, goStops, has raised an undisclosed amount as part of its recent funding round from angel investors like Nitish Mittersain (founder and MD, Nazara Games), Sorabh Agarwal (ex-MD, Copal Partners), Sameer Walia (founder and ex-MD, The Smart Cube), Rohit Shankar (cofounder, Dimdim.com), Sunil Kumar Singhvi (owner, South Handlooms) and other senior corporate executives. The startup plans to utilize these funds to enhance its product offerings through investments in technology and training, add new revenue streams, strengthen its marketing and build a team to handle the next phase of growth.

Stylework: Delhi-based coworking space startup, Stylework raised an undisclosed amount of funding. Founded in 2016, the startup will use the fund to rapidly add new spaces to the portfolio, continue product innovations and expand pan-India. The company initially started as a B2C app-only platform to source and book coworking spaces and then ventured into B2B via direct selling model.