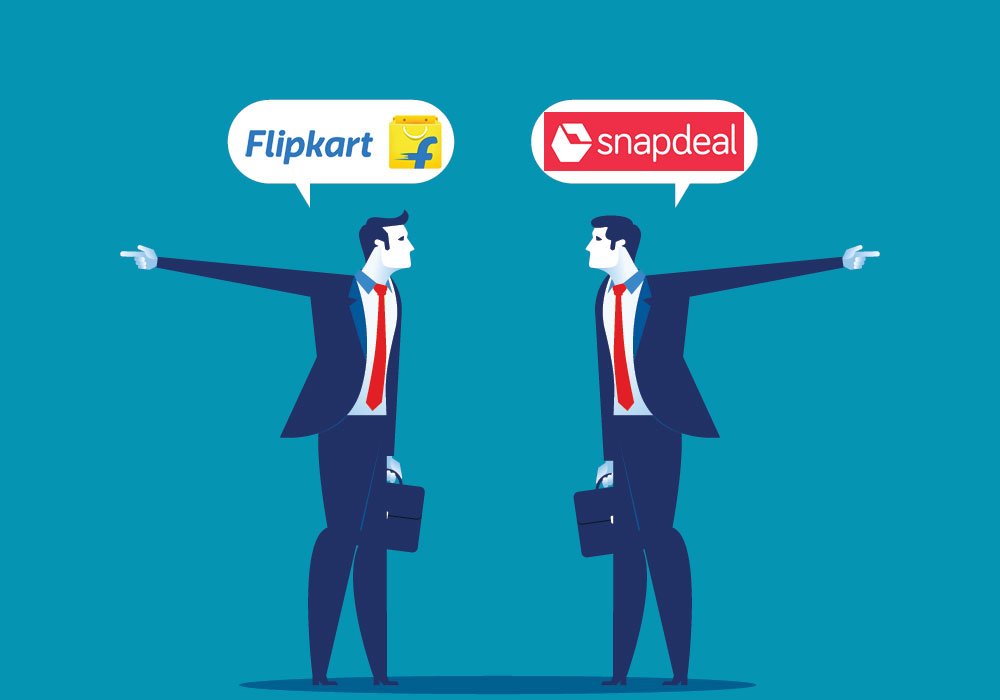 Flipkart And Snapdeal Will Continue Negotiations For The Buyout

The Flipkart-Snapdeal proposed merger has hit yet another snag. According to numerous reports, Snapdeal board has rejected an offer of about $700-800 Mn from homegrown ecommerce major Flipkart for the proposed deal.

The development comes just a few days after Flipkart completed its commercial and legal due diligence of Snapdeal.

As per Livemint, post completion of eight weeks of due diligence Flipkart made the new offer of about $700-$750 Mn last week which was ‘significantly lower’ than $1 Bn bid which it initially made. A report by Moneycontrol mentions that Flipkart has offered $550 Mn valuation to Snapdeal for an all-stock acquisition, while ET, cites deal value proposed by Flipkart to be around $800-900 Mn.

The offer made by Flipkart is just for Snapdeal’s marketplace and will not include Freecharge and Vulcan – the two will be separately sold.

However, citing sources, the report mentioned that the deal isn’t off at the moment and the negotiations will continue but valuation differences between the two companies are likely to delay the process. At the moment it’s unclear if and when, Flipkart will make a new offer.

The new offer is expected to be ‘more palatable to Snapdeal’s minority investors’, which includes, PremjiInvest, Ratan Tata, Ontario Teachers’ Pension Plan and BlackRock, among others.

An email query sent to both Flipkart and Snapdeal did not elicit any response till the time of publication.

It’s now been over two months that industry pundits are being talked about the proposed Flipkart-Snapdeal merger. However, the things are just rotating from one table to another to date.

In June, PremjiInvest, the investment arm of Wipro Chairman Azim Premji, reportedly asked for further clarity on the how the rights of minority shareholders will be protected. In another letter sent to the Jasper Infotech board, PremjiInvest has outlined its concerns over the proposed transaction.

It was also reported that PremjiInvest is trying to build a consensus among other minority investors including Singapore’s sovereign wealth fund Temasek, and asset manager BlackRock etc. The aim is to oppose special payouts to certain shareholders, as per a source aware of the development.

Flipkart had an exclusivity to make a formal offer for the deal till July 3rd for which it had appointed EY to conduct the due diligence on its behalf, while Snapdeal had hired Deloitte.

Interestingly, in June, reports of Flipkart’s proposal to pay just $300-$400 Mn for acquiring the company also surfaced in media. In May, it was reported that Flipkart will be merging the company at a valuation of $1 Bn – much lower than the $6.5 Bn valuation after Snapdeal raised $200 Mn last year in February.

Besides, SoftBank Group is also holding talks to invest in Flipkart and buy part of Tiger Global’s stake in the company. The Japanese investor expected to invest about $1.5-2 Bn in the company, once the deal with Snapdeal is completed. Earlier this year, Flipkart closed a $1.4 Bn funding round and in June Flipkart’s proposed acquisition of eBay India also received approval from the Competition Commission of India (CCI).

Flipkart and Snapdeal signed the Letter of Intent (LoI) for the merger in May 2017. As per reports, Softbank also bought out the stakes of Kalaari Capital and both the founders, raking in a total of 47.5% shareholding in the company. A few weeks back, Snapdeal founders and Nexus Venture Partners infused $17.5 Mn into the company in an emergency funding round.

As per Moneycontrol, if the deal doesn’t go through, Snapdeal may let go 600 to 1,000 odd employees as part of its Plan B.

The final deal amount and future of Snapdeal is now completely dependent upon the majority shareholders in Snapdeal and Flipkart i.e. Softbank Group and Tiger Global Management respectively.