In the span of five years, Startup India has recognised over 34.8K startups and nearly 5.5K startups have received $1 Mn worth of benefits 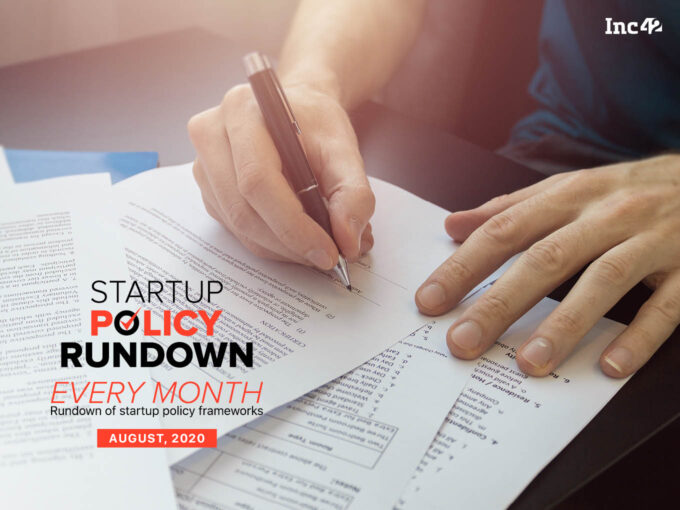 The initiative which was launched in January 2016, has come a long way from where it all started. From enforcing a slew of policy reforms such as funding support to bilateral government collaborations with various countries, the government has been instrumental in boosting the startup ecosystem.

The move has had a cascading effect on several states, after the launch 27 states and 3 Union Territories have launched startup policies. These policies along with the establishment of the state-backed incubators have been the driving force for the startup ecosystem in the country, particularly in Tier 2 and Tier 3 cities.

Till date, Startup India initiative has recognised over 34.8K startups. Out of these, 8.3K startups received intellectual property (IP) rights fee benefits. Over 2.6 Lakh individuals have enrolled in the entrepreneurship-focused learning courses offered by upGrad and Startup India.

Furthermore, supporting Indian startups with capital, nearly 5.5K startups have received $1 Mn worth benefits through this initiative and the government has organised over 150 startup innovation programmes. Under this initiative, the Indian government has also set up a fund of funds, backed by various foreign institutional investors as well as AIFs. Through this, over INR 3476 Cr has already been invested in 323 startups from the fund of funds corpus managed by startup India through investment arm ‘Invest India.’

In an attempt to provide financial assistance to Indian startups, the Reserve Bank of India (RBI) this month has decided to include them under the priority sector lending (PSL). Besides this, the other areas under PSL include agriculture, MSME, export credit, education, renewable energy among others.

The central bank, at the 24th Monetary Policy Committee meeting, announced revising the PSL guidelines including ‘broadening the scope of PSL to include startups’ with a view to align the guidelines with emerging national priorities and bring a sharper focus on inclusive development,’ as mentioned in the RBI’s statement on development and regulatory policy to boost liquidity support for financial market.

In addition to this, RBI also announced its plans to boost the digital payments in the country. Shaktikanta Das, RBI governor said that India’s federal bank is looking at piloting offline-based digital payments such as cards, wallets and mobile devices which would work in areas with low internet connectivity.

The ministry of agriculture had announced an investment of INR 36.71 Cr in 346 agritech startups and startups working in allied sectors, including agro-processing, artificial intelligence, digital agriculture, waste to wealth, fisheries among others. The investment is said to be part of ‘component, innovation and agri-entrepreneurship development programme’ under Rashtriya Krishi Vikas Yojana (RKVY) to promote innovation and entrepreneurship in agri space by providing capital and mentoring the incubating ecosystem.

Accordingly, the government looks to have 25% electric vehicles on road by 2024. The new EV policy led by the AAP government will also waive registration fee, road tax and offer incentives of up to INR 1.5 Lakh (electric car) and INR 30K for electric two-wheelers and three-wheelers and freight vehicles. Also, the government plans to offer low-interest loans on electric commercial vehicles. This move is also said to boost EV sales in the coming months, given the discretionary spending and environmental concerns among the consumers.

The ministry of corporate affairs (MCA) recently proposed a new regime for startups to report how sustainable and responsible they are. The reporting requirement is said to be introduced in a gradual and phased manner, and aims at forcing businesses to go beyond meeting objectives of shareholders and contribute to the society. This also expected to give startup investors a chance to assess the company in terms of value it adds to society.

Ecommerce companies such as Amazon, Flipkart and others have sought an extension of six to seven months from the government to comply with the Consumer Protection (Ecommerce) Rules, 2020, which was notified on July 23. According to the rule, the ecommerce companies have to do the mandatory listing of ‘country of origin’ for products listed on its website. A senior executive of one of the ecommerce companies told Economic Times that some of these requirements will put under stress on MSME sellers who already have their backs up against the wall due to excessive compliances that come with selling online.

However, the DPIIT has announced to set September 30 as deadline for ecommerce companies to complete assigning ‘country of origin’ tags to both new and existing items on their platforms.

The IT minister Ravi Shankar Prasad recently launched the INR 4.3 Cr ‘Swadeshi Microprocessor Challenge’ as part of Aathmanirbhar Bharat scheme. Prasad, in an official statement, urged startups and students to use microprocessors to develop various technology products. This initiative is said to meet India’s future requirements of strategic and industrial sectors, along with the issues of licensing, security, technology obsolescence, and most importantly, cutting dependency on imports.

The Ministry of Corporate Affairs (MCA) is in talks with the department for Promotion of Industry and Internal Trade (DPIIT), the Securities and Exchange Board of India (SEBI) and RBI, to discuss the possibility of creating a single channel for compliance forms with common data sources. With this, the government looks to bring down duplication of filing and integrate database of MCA with other concerned ministries, thereby enhancing ‘ease of doing business’ for startups.

The National Health Authority (NHA) recently announced that the National Digital Health Mission (NDHM) sandbox is live for the testing. The CEO of Ayushman Bharat Indu Bhushan in his Twitter post has invited healthcare, software providers and startups to join them in co-developing tech products that would help them in framing the policy and technology framework.

In another update, the draft health data management policy released by the government stated that it will be collecting details of bank account, credit card and other payments details of users as part of NDHM initiative.

The IT minister Prasad recently launched CHUNAUTI (Challenge Hunt Under NGIS for Advanced Uninhibited Technology Intervention), calling on startups to develop products and solutions to address the challenges being faced amif the Covid-19 pandemic. The programme was launched under the Next Generation incubation Scheme (NGIS), a incubation scheme by the Software Technology Parks of India (STPI) to drive India’s rise as a global leader in software solutions and products.

The CHUNAUTI programme is open for tech startups, individuals, academicians, researchers, educators, entrepreneurs, partnership firms. The participants of this programme will be encouraged to develop products and technologies in the area of edtech, agritech and fintech supply chain, logistics and transportation management; infra and remote monitoring among others, particularly focused on Tier 2 and Tier 3 regions.