Announced on August 15, 2015, Startup India has been the lynchpin around which India’s digital economy has been built in the past five years

Since its formal launch in 2016, Startup India has been backed by slew of policy reforms, and bilateral government collaborations to increase the reach of startups

Here’s taking a stock of the goals, milestones and challenges in five years of Startup India

Five years ago, on 15 August 2015, Prime Minister Narendra Modi coined one of his many popular slogans — ‘Startup India, Standup India’. The words became the pillar for one of India’s most successful government-backed projects — Startup India.

Launched in January 2016 and enforced with a slew of policy reforms such as funding support, bilateral government collaborations with various countries, and consistent messaging of hope and pride in Indian tech, Startup India attracted entrepreneurs from every corner of India. So what has been the impact of these initiatives in the past five years?

The most obvious impact of the Startup India programme is seen in the boost in the number of startups over the past five years. Post the launch of Startup India, 26 state governments launched their startup policies and overall 30 states have launched startup policies over the years, some predating Startup India. These policies along with the establishment of the state-sponsored incubators have been a key drivers of the startup ecosystem throughout India, particularly in Tier 2 and Tier 3 cities. Further, 38 state-supported Atal incubation centres have been established in India since 2016.

“Before the policy launch, there were hardly three to four companies in Uttarakhand. But since the state government started offering seed capital to startups, startups became a viable opportunity for many innovators in the state,” said Rajat Jain, founder of Sunfox Technologies, which is based in Uttarakhand and was founded in 2016.

Between 2016 and August 2020, Startup India programme says it has recognised over 34.8K startups. Among these, 8.3K startups received intellectual property rights (IPR) fee benefits, while over 2.6 Lakh people enrolled in the entrepreneurship-focused learning courses offered by upGrad and Startup India. Further, over $1 Mn worth benefits were given to 5.5K startups as part of over 150 startup innovation programmes and challenges organised by Startup India.

Among the many promises under Startup India, the government pledged to set up a fund of funds for startups, pooling together funds from various foreign institutional investors as well as alternative investment funds (AIF). Till date, over INR 3123 Cr has been committed by the government to 47 venture capital firms and INR 3476 Cr has already been invested in 323 startups from the fund of funds corpus managed by Startup India through Invest India.

Startup India also claims to have enabled global market access and knowledge for Indian startups through bilateral government collaborations with Russia, South Korea, Portugal, Japan, Netherlands, United Kingdom, Sweden, Finland, Israel, and Singapore. Also known as a Startup Bridge, these collaborations enable startups, investors, incubators, accelerators and aspiring entrepreneurs of both countries to connect with one another by providing them with resources to expand and become global entities. 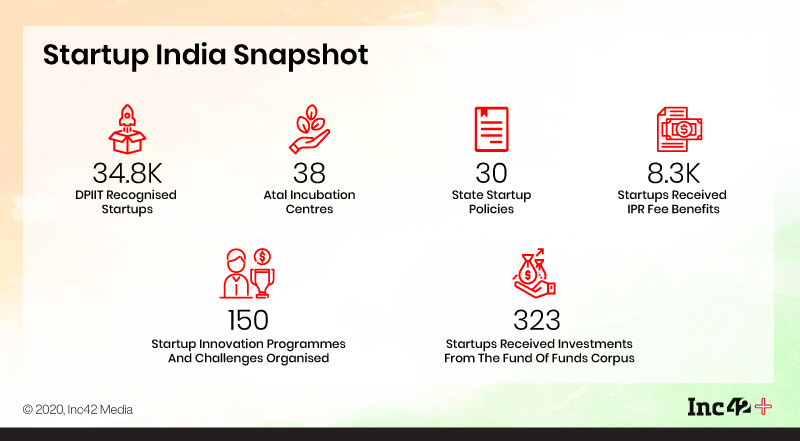 The Policies That Changed The Game For Startups In 2019

One of the pivotal changes in the startup ecosystem in recent times was the more inclusive definition of “startups” from the legal and taxation point of view. In February 2019, the Department for Promotion of Industry and Internal Trade (DPIIT) in a gazette notification, widened the definition of startups under ‘Startup India, Standup India’ scheme. In the new definition, an entity will be considered a startup,

In comparison, the earlier definition of startups as given in DPIIT’s April 2018 notification only considered entities as startups up to a period of seven years from the date of incorporation. Further, the annual turnover was not to exceed INR 25 Cr in any of the financial years since incorporation, but this has now been extended. Under the new definition too, startups are required to be working towards innovation, development or improvement of products, or a scalable business model with a high potential of employment/wealth generation. Further, the same notification also envisioned to simplify the process for startups to get exemptions on investments under section 56(2)(viib) of Income Tax Act, 1961, popularly known as the angel tax.

Angel tax is an income tax levied on the funding received by unlisted startups by issuing shares at a cost higher than the fair market price. Over the years, many startups have raised concerns over the classification of funding as income and investment. In August 2019, the finance minister exempted DPIIT-registered startups from the angel tax requirement. However, those not registered continue to come under its purview.

In Feb 2020, India was ranked 63 among 190 countries on ease of doing business rankings by the World Bank, as compared to 142 rank of India in 2015. According to the World Bank, the three main reasons for this jump in ranking were India’s reduced cost of starting a business, better access to building permits and electronic submission of documents for import and export audits. 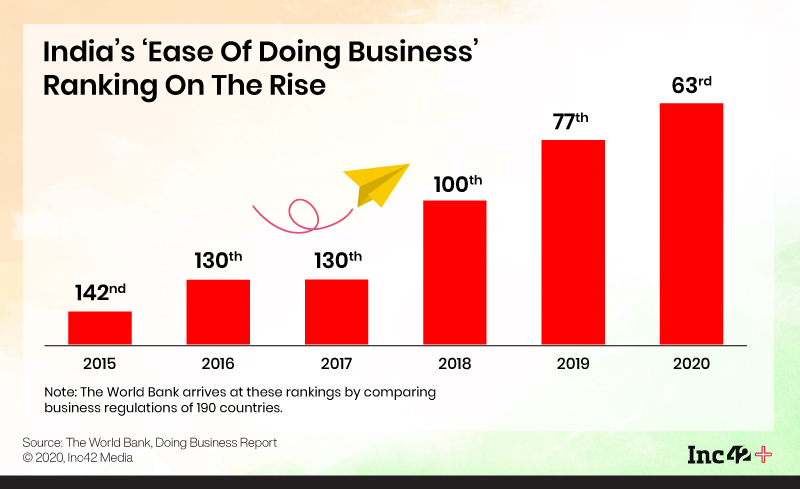 States Back The Central Vision

Some states such as Kerala, Karnataka and Maharashtra have led from the front when it comes to startup policies, and others such as Delhi have recently revamped their startup policy to be in line with the times. At times, the lack of sync between the centre and state government has resulted in startups losing out on funds or banks turning away startups. In such instances of delay and complicated procedures, startups have either depended on private incubators and investment bodies or chose to build sustainable bootstrapped businesses. 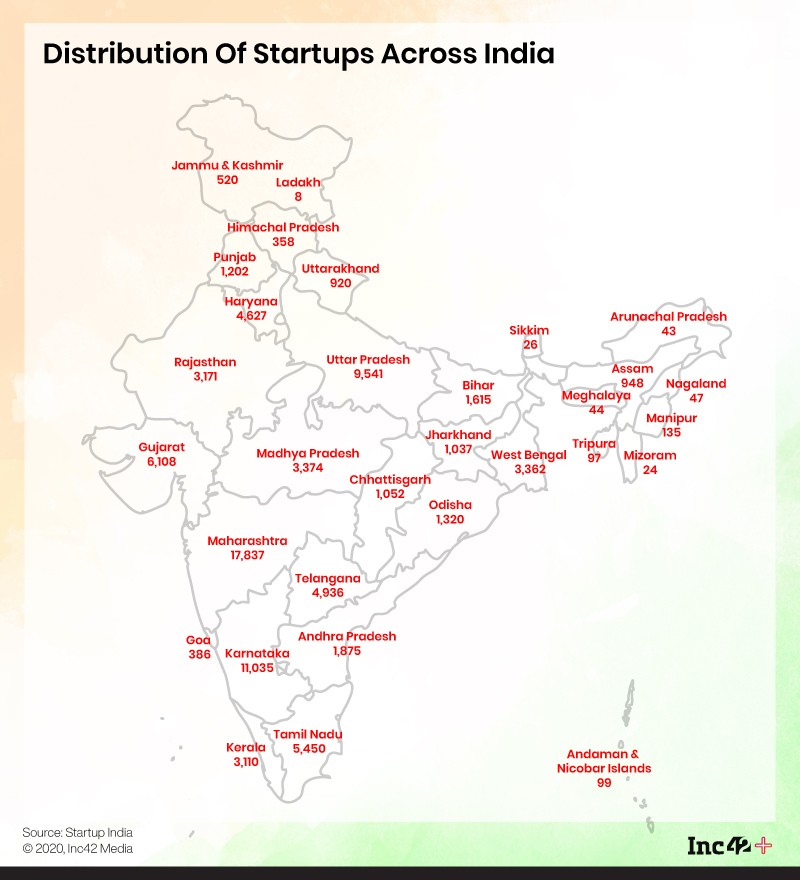 The role of Startup India in attracting these investors to India cannot be underestimated. Even as the challenges of the startup ecosystem have intensified during the pandemic, investors have continued to show faith in some startups. Even so, well-funded startups and unicorns have announced layoffs and furloughs. The next challenge for Startup India and India’s startups will be to prove their worth as job creators.

When the Indian government allocated an INR 20 Lakh Cr. to fight the Covid-19 economic recession, a significant part of this package was focused on supporting the impacted micro, small and medium enterprises (MSMEs) which also includes many startups. The government said it will be allocating over INR 3.7 Lakh Cr to bailout MSMEs. However, the decision was met by several questions about the effectiveness of the package, which may exclude many startups because of the eligibility criteria.

While the government has done much for bringing the Indian startup ecosystem to its current stage, the Covid-19 pandemic has come up as the real test of the strength of these official structures. Will Startup India continue to be the flagship programme of the Indian government, or will Make In India step up to the limelight as the focus turns to making India a major exports hub?