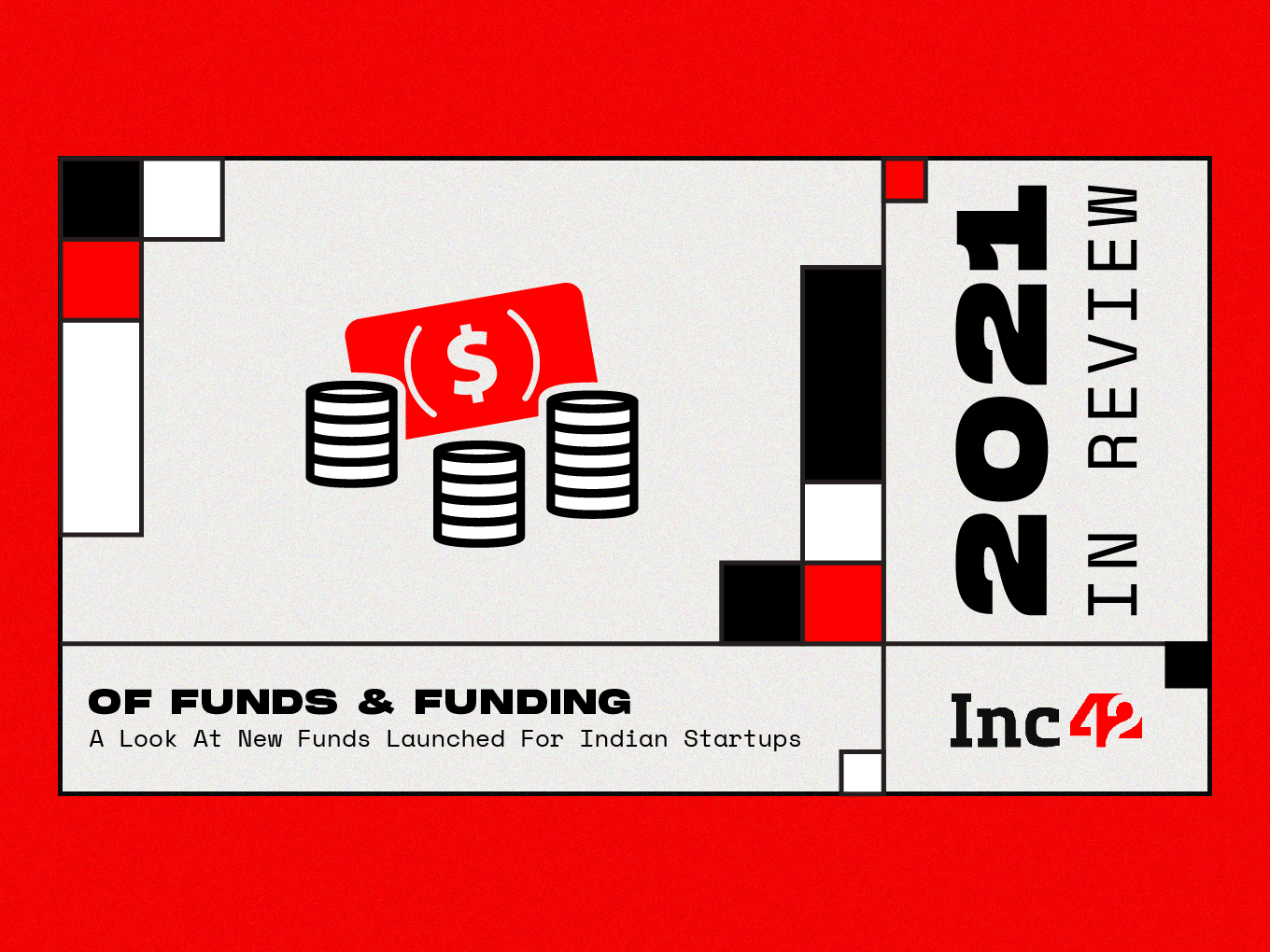 Venture capital funds worth more than $6.2 Bn have been launched in India this year

As part of our annual 2021 in Review series, we decided to take a look at the new funds and how they plan to deploy the capital amongst Indian startups, read on!

The startup ecosystem has been riding on the waves of an impressive bull run marked by successful initial public offerings (IPOs) and unicorn valuations. More than $39 Bn has been invested in Indian startups this year alone, marking a 225% increase from the previous year.

From BYJU’s to Flipkart, many Indian startups have hit the headlines for raising massive capital at mammoth valuations.

One of the key drivers of this massive uptick in funding is the success of Indian startups in the public market, along with the pandemic pushing digital adoption, further cementing the role of tech companies. Even legacy conglomerates including Reliance and Tata are rushing to build a ‘super app’ in competition with the new kids on the block.

This success story was well supported by commensurate growth in venture capital funding in 2021. We have put together and analysed a list of all the venture capital funds launched this year. The number stands at more than 62, including both newly-launched funds as well as iterations of older funds.

According to Inc42 analysis, about $6.2 Bn has been raised by 62 funds across categories (VC, Debt, CVC, Micro VCs) to back the rising Indian startup economy. Of these 62 funds, nine are Corporate Venture Capital funds (or CVCs) and 12 are Micro VCs.

As part of our annual 2021 in Review series, we decided to take a look at the new funds and how they plan to deploy the capital amongst Indian startups.

Former Sequoia executives’ venture fund A91 Partners had closed its second fund at $550 Mn (INR 4,095 Cr) in November this year. The VC firm plans to invest in 15 to 17 established Indian startups or those with a presence in the country. Its focus area include consumer goods and services, financial services, healthcare and technology.

The fund was raised from private life insurance companies, high-net-worth individuals (HNIs), family offices and entrepreneurs in India. Foreign LPs, including the International Finance Corporation and Asia Alternatives also invested in the fund.

Earlier this year, A91 Partners participated in Mumbai-based Atomberg Technologies’ $20 Mn funding round. The fund’s portfolio includes startups such as Paperboat, Aye, Atomberg, SUGAR Cosmetics and even the unicorn Digit Insurance.

Tech-focused venture capital firm Chiratae Ventures had closed its fourth fund (oversubscribed by 25%) at $337 Mn in August this year. Over half the fund’s backers are Indian investors including family offices and industrial families. The fund also has global backers from the United States, the United Kingdom, Europe, Japan and Singapore.

In the past, Chiratae has backed some startups that are now unicorns including FirstCry, Flipkart, Lenskart and Policybazaar. PolicyBazaar has filed its DRHP as well. Other startups in its portfolio include Agrostar, Bizongo, Bounce, Cropin, Curefit, Emotix, GoMechanic, HealthifyMe, PlayShifu, Pyxis, and Uniphore among others.

“Every single rupee is from India,” Mani Krishnaiyer, strategic advisor at TVS Capital Funds told Inc42 at the time. “We are not opposed to raising dollar money but the family offices who’ve invested in the fund, besides returns, are also looking to support the entrepreneurial ecosystem in the country,” he added.

45% of the funds have come from 24 family offices with individual contributions of more than INR 10 Cr. Development finance institutions and insurance companies have contributed another 22% of the fund with 26% of it coming from ultra-high-net-worth individuals.

Some of the ventures backed by the fund include GoDigit General Insurance Limited, DCB Bank and LEAP India.

Amazon India announced the $250 Mn Amazon Smbhav Venture Fund to invest in startups focusing on SMB (small and medium businesses) digitisation, agriculture and healthcare during its annual ‘Smbhav’ event in April this year.

The fund will support the best ideas to digitise SMBs, technology-led innovations in agriculture to improve farmer productivity and enable ‘universal and quality healthcare access for all using technology’.

Along with the fund announced amidst protests by Indian sellers associations, the company also announced its ‘Local Shops on Amazon’ programme. It pledged to bring one million offline retailers and neighbourhood stores online on its marketplace by 2025.

The fund had participated in investment tech startup smallcase’s $40 Mn Series C funding round. It has also invested in M1xchange, a digital invoice discounting platform for micro, small and medium enterprises.

In August this year, sports tech startup Dream Sports (parent company of Dream11) made an initial allocation of $250 Mn to Dream Capital, its venture capital and acquisition arm. Dream Capital will follow a multi-stage investment strategy which will see it investing $1 Mn to $100 Mn in startups in the fields of sports, gaming and fitness-tech.

The fund has invested in startups including the acquisition of Dream Game Studios (formerly Rolocule) and minority investments in SoStronk (B2C esports platform) and Elevar (D2C performance sports footwear and equipment brand.

The Rise Of Micro VCs

For the last years, India has seen the launch of several Micro VC funds that have helped fuel the early stage funding at a massive stage.

And if we look at the early stage funding in 2021, $1.08 Bn was invested in early-stage startups in the country across 660 deals till December 18th.

We have put together a list of some micro VC funds launched this year here — 11 micro VCs worth a total of $111.58 Mn. 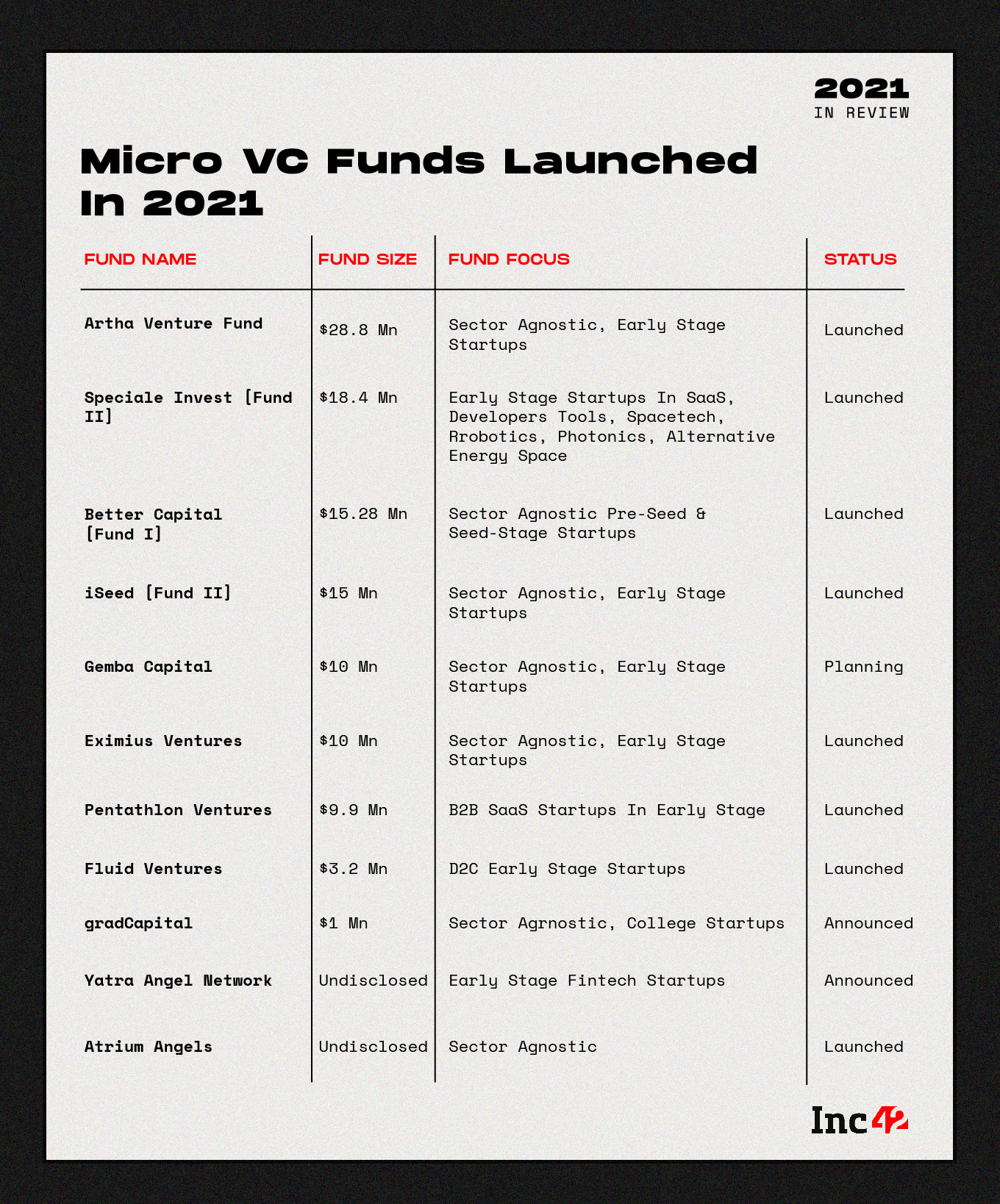 More than fifty limited partners (LPs) participated in the fund, with more than half the investments coming from family offices. Apart from that, it has raised capital from over 20 listed companies, non-resident Indians (NRIs), HNIS, super angels and the Small Industries Development Bank of India (SIDBI).

AVF’s investment strategy is to be the first investor in early-stage startups, making investments in the range of INR 1 Cr to INR 2 Cr with anywhere between INR10 Cr ($1.4 Mn) and INR 15 Cr ($2.2 Mn) held in reserve for follow-on rounds.

The early-stage venture fund has made investments in startups including $170k in Haazri, a tea-and-snack quick service restaurant startup, and $250k in LenDen Club, a peer-to-peer lending platform.

Seed stage venture capital firm Speciale Invest had raised INR 140 Cr (~$18.5 Mn) for its second fund to make investments in deeptech startups across India and Asia. This amount was mostly raised from large family offices of Indian business houses, and founders and CEOs of technology and industrial companies.

Speciale had raised its first fund in 2018 and had invested in 14 startups across segments including SaaS, spacetech, robotics, photonics, and alternative energy startups. The investment strategy and portfolio allocation were to remain the same across funds with the larger corpus of the second fund allowing for follow-on allocations.

“Out of 14 startups, we have seen two exits: AR startup Scapic (acquired by Flipkart in 2018) and online gaming startup Pocket52. Out of the 12 investments, 70% of our portfolio companies have gradually expanded and raised value,” Vishesh Rajaram of Speciale Invest told Inc42 earlier this year.

It had previously invested in more than 125 startups across new categories including neobanking, fintech infrastructure, edtech and SME digitisation startups. It now looks to back crypto and web3, cleantech and other creator-economy focussed startups.

It has a growing portfolio of more than 125 companies including Open, M2P Fintech, Teachmint, Slice, Jupiter, Khatabook, ReadyContacts, PicBackMan, DataDoctor, Magik, Simple Wall, and Maroun Place, among others

Gemba Capital, which invests in pre-seed and seed rounds, launched its maiden micro-VC fund of $10 Mn in September this year.

The fund has been earmarked to be invested in 24 early-stage startups across SaaS, consumer tech, fintech and deeptech sectors with a first cheque of $250k and a 35% reserve ratio for making follow-on investments.

While speaking at Inc42’s The Makers Summit, Akshay Kothari, COO of Notion, had spoken about the importance of companies making long-term strategic and venture bets in emerging areas and technologies.

“In any given year, you need to have core, strategic and venture bets. You need to split your time about 70/20/10 between them,” he shared.

There are few stories that can underline the importance of continuing to innovate than that of Kodak’s missed opportunity with digital photography. The company that was once a dominant figure in the imaging industry was swept aside by the sudden rise of digital photography technology.

But there is a little known fact in the story: the world’s first digital camera was created by Eastman Kodak engineer Steven J Sasson in 1975, but Kodak’s management decided not to take up the technology because it could cannibalise film sales—which made up a bulk of the company’s sales at the time.

Fast forward a few decades, and Kodak filed for bankruptcy in 2012. Unlike most corporate meltdowns, this one can easily be traced back to exactly one wrong decision.

Indian corporations in 2021 are much quicker on the uptake as many have decided to invest venture capital into emerging startups. Some of the biggest funds we have mentioned earlier in this article (TVS, Amazon, Dream) are corporate venture capital funds.

Some startups backed by CVC include GoDigit, DCB Bank, LEAP India, Ola and Licious. This year, nine CVCs worth $1.205 Bn were raised in India. Here, we bring you some more of them. 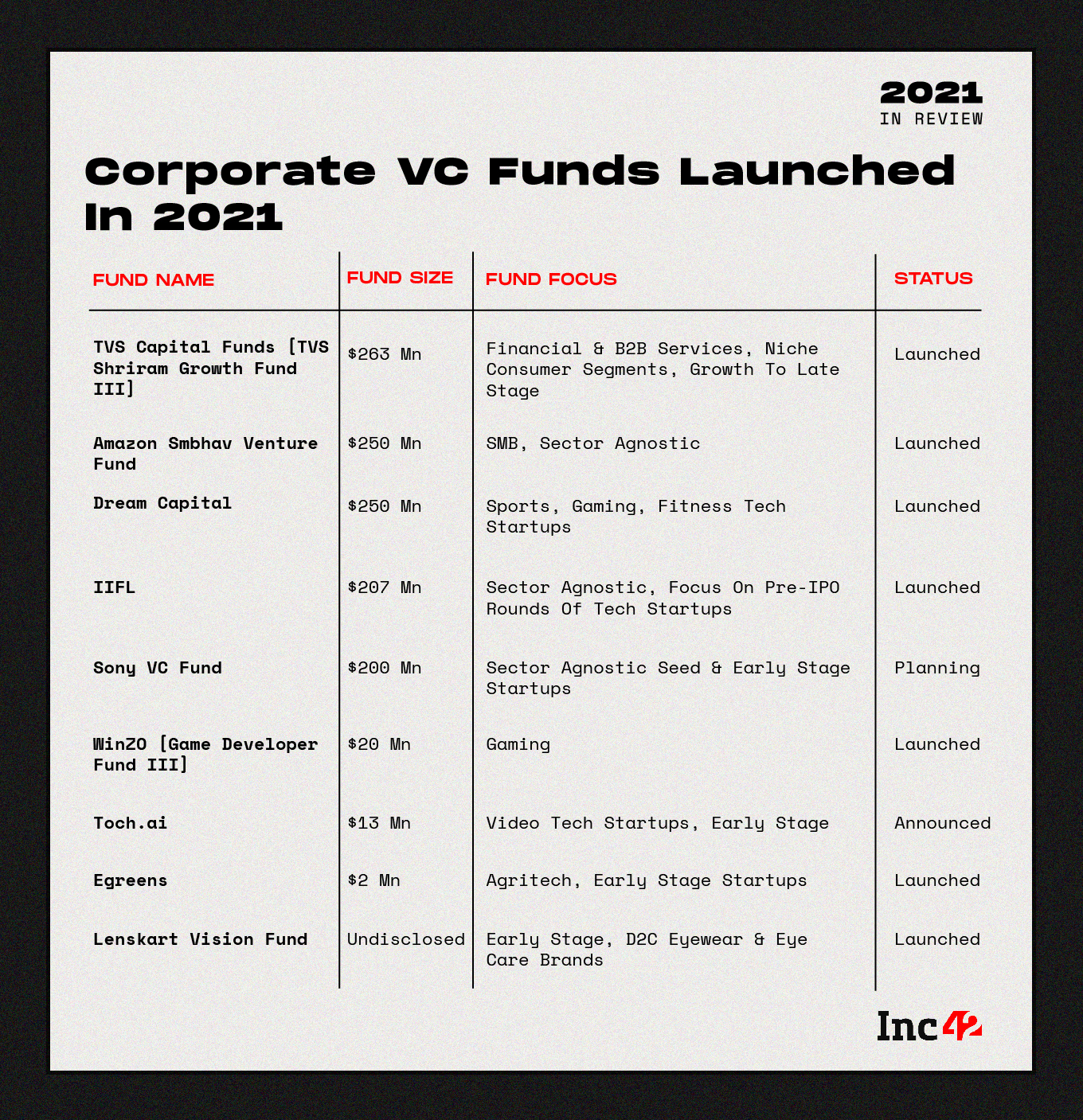 Non-banking financial company IIFL had announced the launch of its INR 100 Cr ($13.5 Mn) early-stage seed fund focused exclusively on Indian fintech startups. Along with the funding, the company would also provide mentorship, collaboration opportunities and partnerships.

The company also has a separate INR 1,500 Cr ($207 Mn) fund to invest in the pre-IPO (initial public offering) and late-stage rounds of digital businesses. IIFL co-led Ola’s recent $139 Mn funding round and led Licious’s $52 Mn round that saw the meat startup become a unicorn. It also co-invested in the June 2021 $50 Mn funding round for Bengaluru-based edtech giant BYJU’S through its private equity fund.

Tokyo-based global conglomerate Sony has set up an India-focused VC fund of $200 Mn to co-invest in Indian startups, alongside celebrities from Bollywood and sports.

The Japanese conglomerate is one of the world’s largest manufacturers of consumer and professional electronic products including the most popular video game console series and image sensors used on the most popular smartphones.

Sony has appointed a former managing director of the company’s music arm in India, Vijay Singh to lead the venture. Singh left his position as Fox Star Studios’ CEO after its acquisition by Walt Disney to join Sony’s new venture capital efforts in the country. The fund’s portfolio includes Zoomcar and Slice.

Founded in 2018 by Paavan Nanda and Saumya Singh Rathore, WinZO offers skill-based games such as carrom, cricket, 8-ball-pool, etc that are available in ten different languages. These games are acquired from developers and studios to be published by WinZO

Through the Gaming Lab, Kalaari and WinZO are looking to invest up to $1 Mn in early-stage startups catering to gamers. Selected companies will also get access to WinZO’s Centre of Excellence, helping them drive growth, strategy, distribution and monetisation.

AI-driven video-processing startup Toch.ai had launched an INR 100 Cr startup fund earlier this year to invest in audio and video technology startups across the world. Toch.ai will also provide advisory and networking opportunities to promising startups along with the capital infusion.

Founded in 2016 by Vinayak Shrivastav, Saket Dandotia and Alok Patil, Mumbai-based Toch.ai’s platform uses AI to meta-tag images, video and text, and understand the context and key moments in videos.

With the fund’s launch, Toch.ai will be looking to expand its audio-video technology offering by investing and acquiring startups that bring disruptive video processing and delivery technology to the table.

D2C eyewear brand Lenskart had launched its Lenskart Vision Fund earlier this year, and the company plans to invest up to $2 Mn in startups synergistic to eyewear, eye care and omnichannel eyecare and eyewear retail sectors.

Founded in 2010 by Peyush Bansal, Lenskart is a retailer and manufacturer of eyewear and eye care products. Along with the infusion of capital, the selected startups will also gain access to Lenskart’s 700+ retail stores and channels across India, Singapore, the Middle East and the United States.