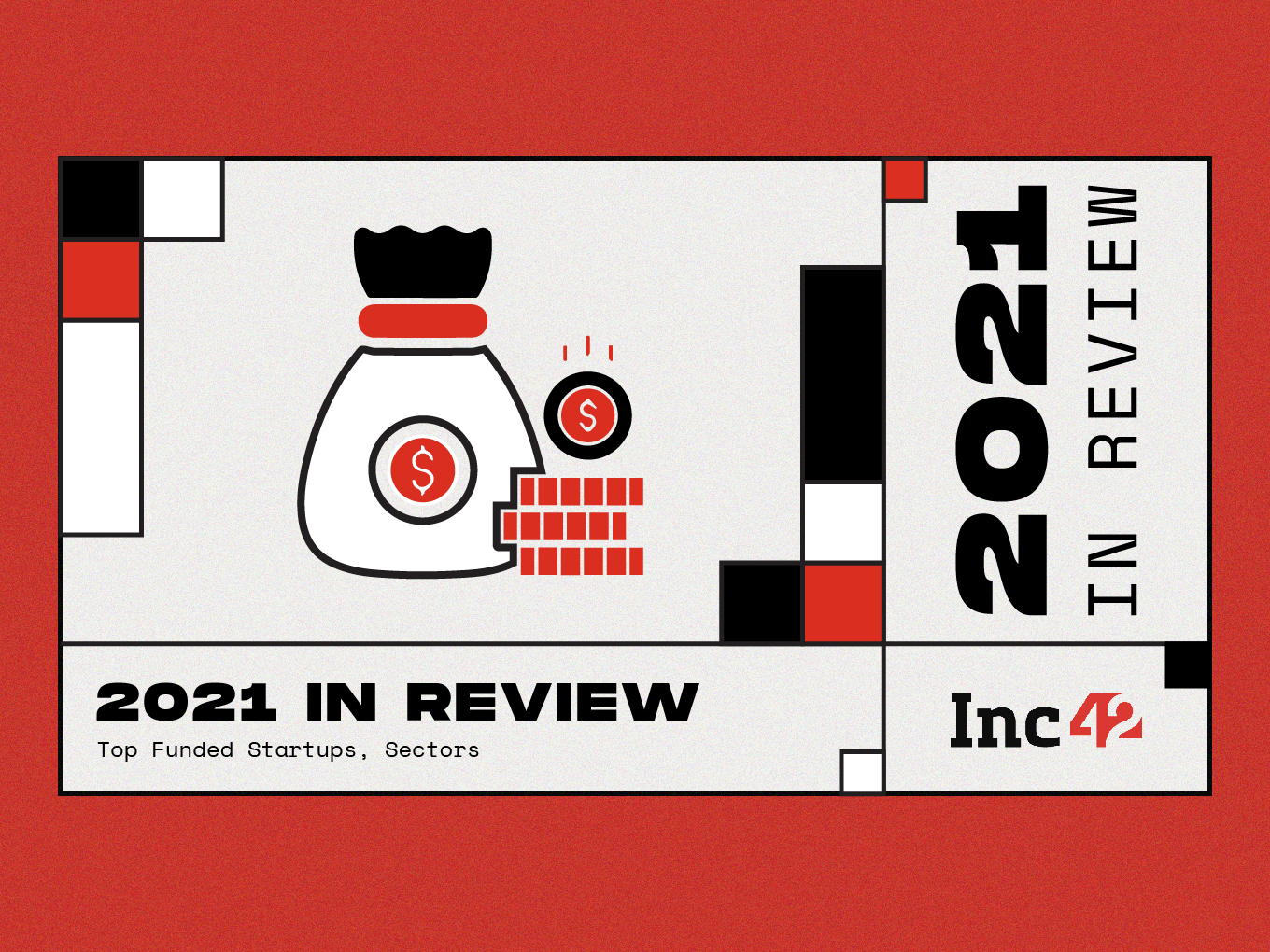 In 2021, the Indian startup ecosystem has raised around $39 Bn+ in funding, the highest ever

With $3.6 Bn funding round, Walmart-owned Flipkart recorded the biggest deal of 2021

India is known for its love for cricket, and its fondness for action and drama-packed Bollywood films. However, over the past couple of years, India has successfully managed to create a new narrative of ambitious young entrepreneurs who are willing to take risks to solve local and global problems.

Now, don’t get me wrong, India has always been considered a talent hub. Be it any major blue-chip companies around the world, it will be hard not to find an Indian leading a crucial team. Examples are plenty! Microsoft, Google, Adobe, IBM, and recently Twitter have Indians at the hot seats.

However, the rise of many first-time entrepreneurs building their startups has put India straight to the top three countries of the world with the highest number of startups.

India is home to more than 38K+ active startups, making it the third-largest startup ecosystem in the world after China and the US.

It is a no brainer that to operate these startups, investment is required. Between 2014 and October of 2021, the Indian startup ecosystem has managed to mop up more than $100 Bn investment from foreign and domestic investors. And if we look at 2021 alone, over $39 Bn+ has been invested in Indian startups, almost 40% of investment (of the total $109 Bn) recorded between 2014 and 11th December 2021, Inc42 Plus data show. 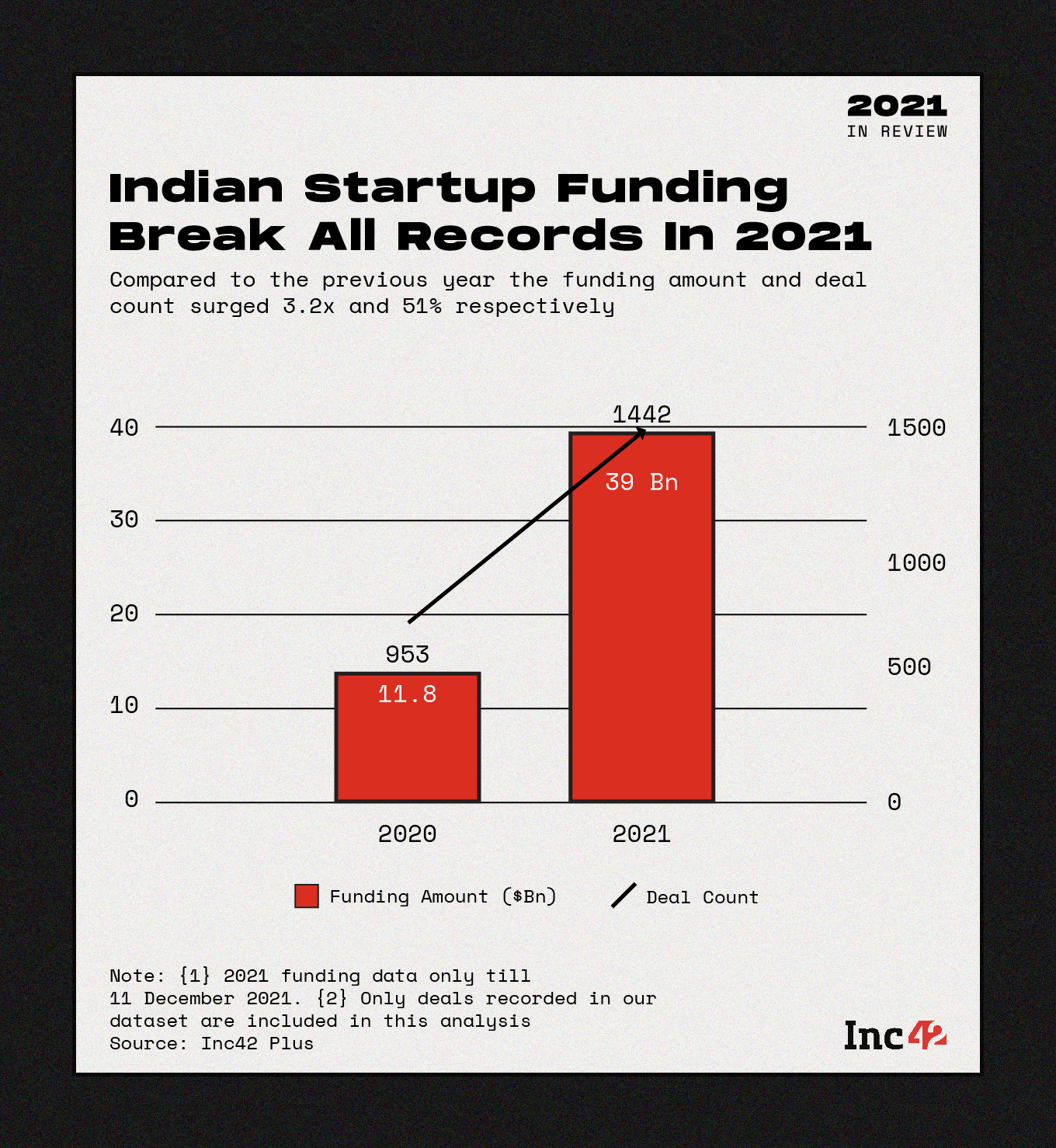 The Year Of Unicorns

People would have laughed it off had someone said that in 2021 we were going to see 40 unicorns, 2020 being a covid stricken year. But here we are! As there is a plausible chance that we might end the year with 45+ unicorns.

The year started with an insurtech startup – Digit Insurance reaching over $1 Bn valuation. The second startup to achieve the unicorn status was a US-based healthtech startup Innovaccer after mopping up $105 Mn at $1.3 Bn valuation.

Overall, in 2021, the Indian startup ecosystem has added 40 startups to the unicorn club. 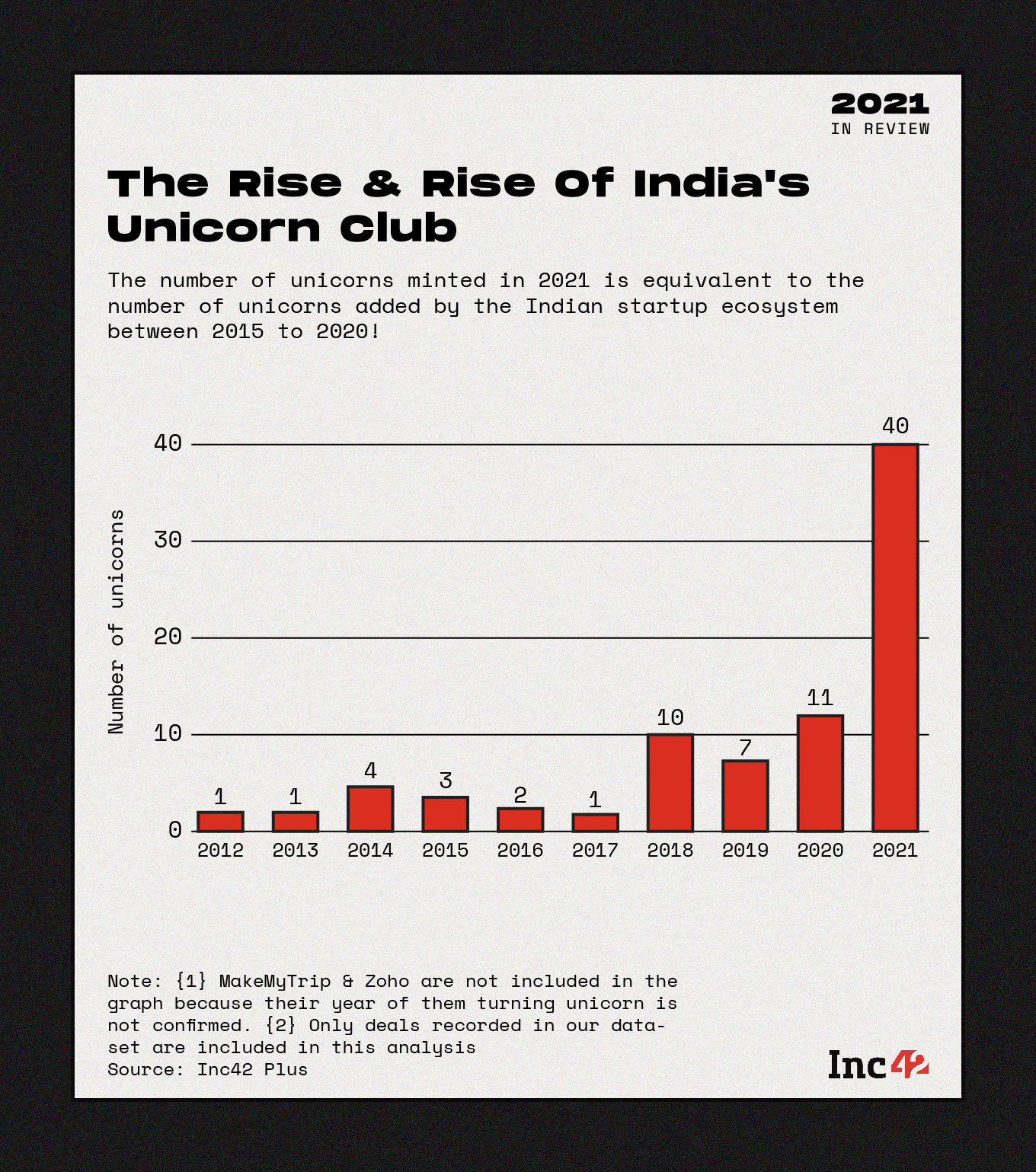 In July, the Walmart-backed Flipkart picked up $3.6 Bn at a whopping $37.6 Bn valuation. The investment was raised from Walmart, GIC, Canada Pension Fund, and SoftBank.

The said funding saw the return of Japan’s SoftBank to the Flipkart’s captable. Masayoshi Son-led SoftBank was one of the early backers of Flipkart, but ended up selling its 20% stake in the Bengaluru-based Flipkart to Walmart in 2018, when the US retail giant acquired Flipkart for $16 Bn.

To further consolidate its already dominating market share of around 31%, the ecommerce platform is leaving no stones unturned. The startup soon after receiving the hefty check of $3.6 Bn, launched its social commerce platform Shopsy to pit against Meesho, Dukaan, Trell, and Youtube’s Simsim.

BYJU’s has also announced securing a term loan B funding worth $1.2 Bn last month. As per sources aware of the investment, BYJU’s intends to utilise the TLB round for offshore corporate purposes, which often means acquisition to further strengthen its presence in the foreign land.

BYJU’s became the second startup in the country to have raised a TLB funding round. Earlier, IPO-bound hospitality unicorn OYO in July had raised $660 Mn from global institutional investors.

Interestingly, the company spent a major chunk of this capital worth around $2.7 Bn in 2021 to acquire ten businesses. The edtech unicorn spent around $1 Bn in acquiring higher education tuition chain Aakash Educational Services.

BYJU’s has also now hopped on the IPO frenzy as it intends to go public in the next 18 months. While the specifics of the IPO offer are not known, it wouldn’t be wrong to say that BYJU’s IPO would be one of the most anticipated after Paytm’s. 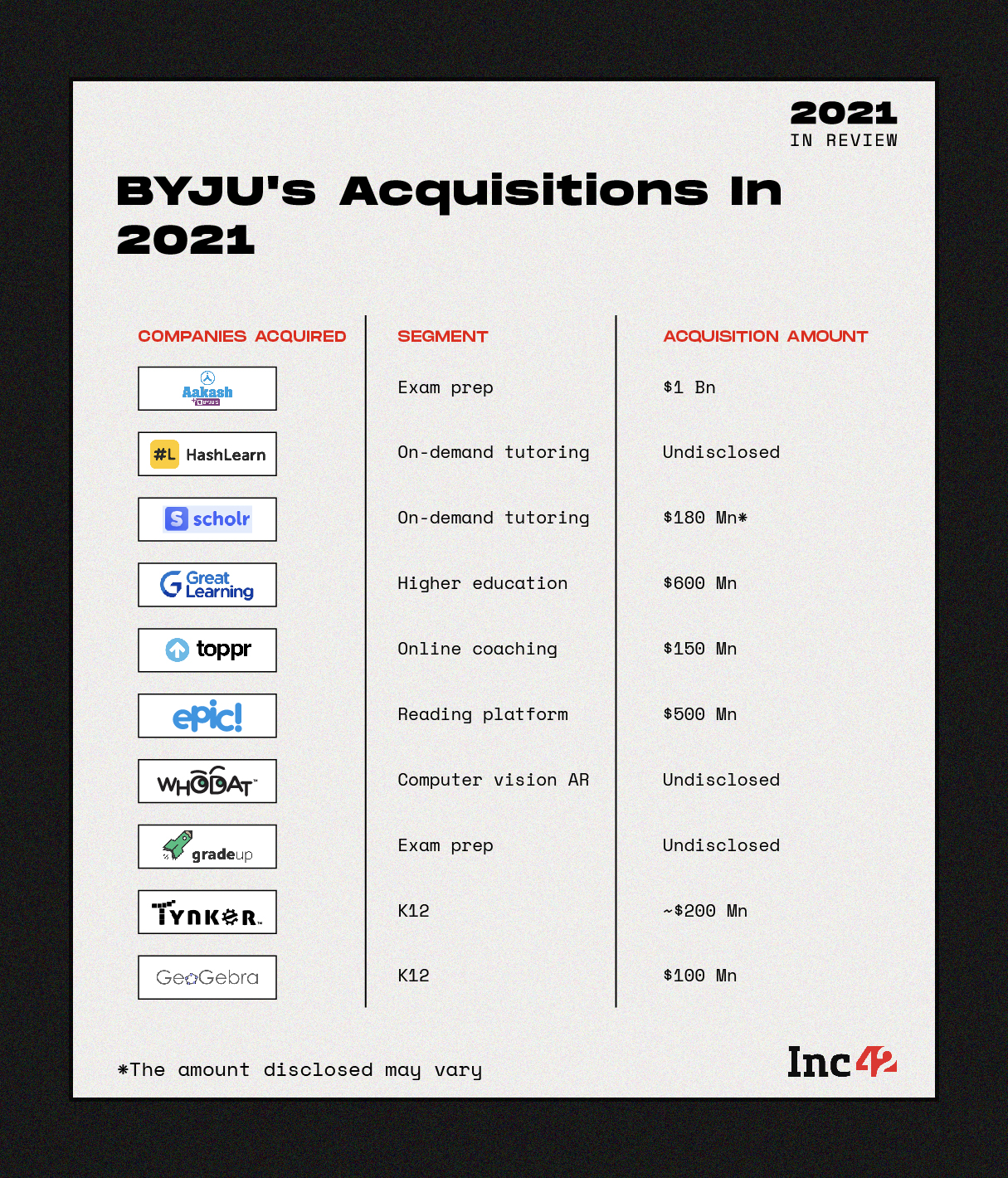 Food aggregator Swiggy which is also doubling down on quick segment delivery through Instamart has raised a total of $1.6 Bn across multiple rounds from investors including Masayoshi Son’s SoftBank, Prosus, Qatar Investment Authority. During its last funding round Swiggy was valued at $5.5 Bn.

Swiggy in its core business of food delivery competes against the newly listed Zomato. In July, the Deepinder Goyal-led Zomato became the first new age internet company to go public to raise INR 8,250 Cr. At the time of filing the story, Zomato’s shares were trading at INR 144, per share at a market capitalisation of $14.9 Bn.

This year, Swiggy has doubled down on the quick delivery segment. The foodtech giant announced to invest $700 Mn in Instamart to take on Zomato backed Blinkit (earlier called Grofers), Bengaluru-based Dunzo, and new entrant Zepto. 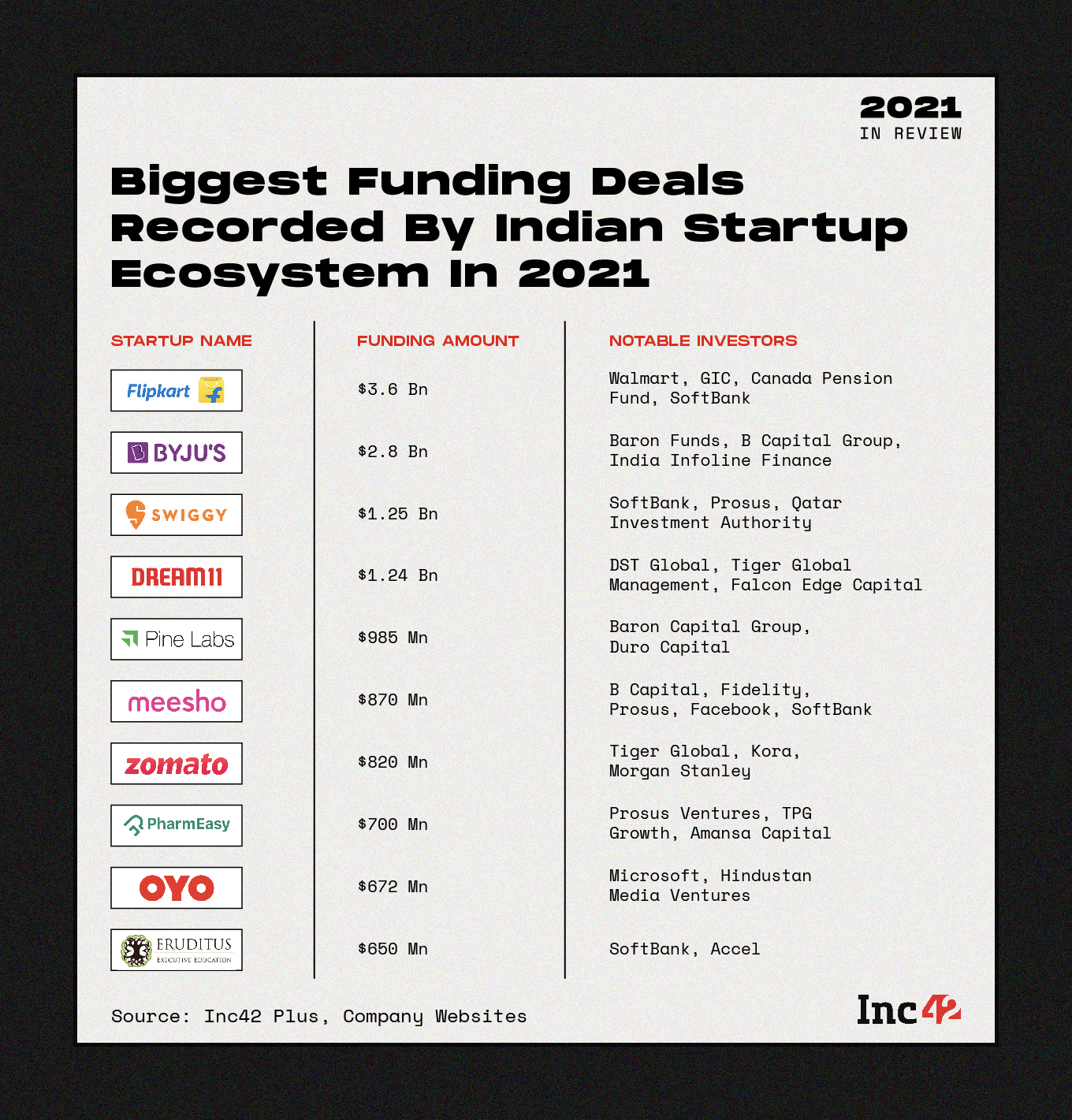 The Hottest Sectors In The Indian Startup Ecosystem

The ecommerce space which is expected to touch $200 Bn by 2026 siphoned the most funds in 2021. The sector recorded a total of $9.01 Bn investment in 2021. The ongoing pandemic has resulted in more people shifting to ecommerce. It is interesting to note that ecommerce was not even in the top five sectors in terms of funding in 2020.

Over the years, D2C startups have raised close to $3.6 Bn of the total $21.8 Bn raised by the ecommerce sector. D2C brand aggregators such as GlobalBees, Mensa Brands, 10Club, GOAT Brand Labs are also doubling down their investment in D2C brands. In October, Mensa Brands became the fastest unicorn of India as its valuation reached a billion-dollar within six months of inception. 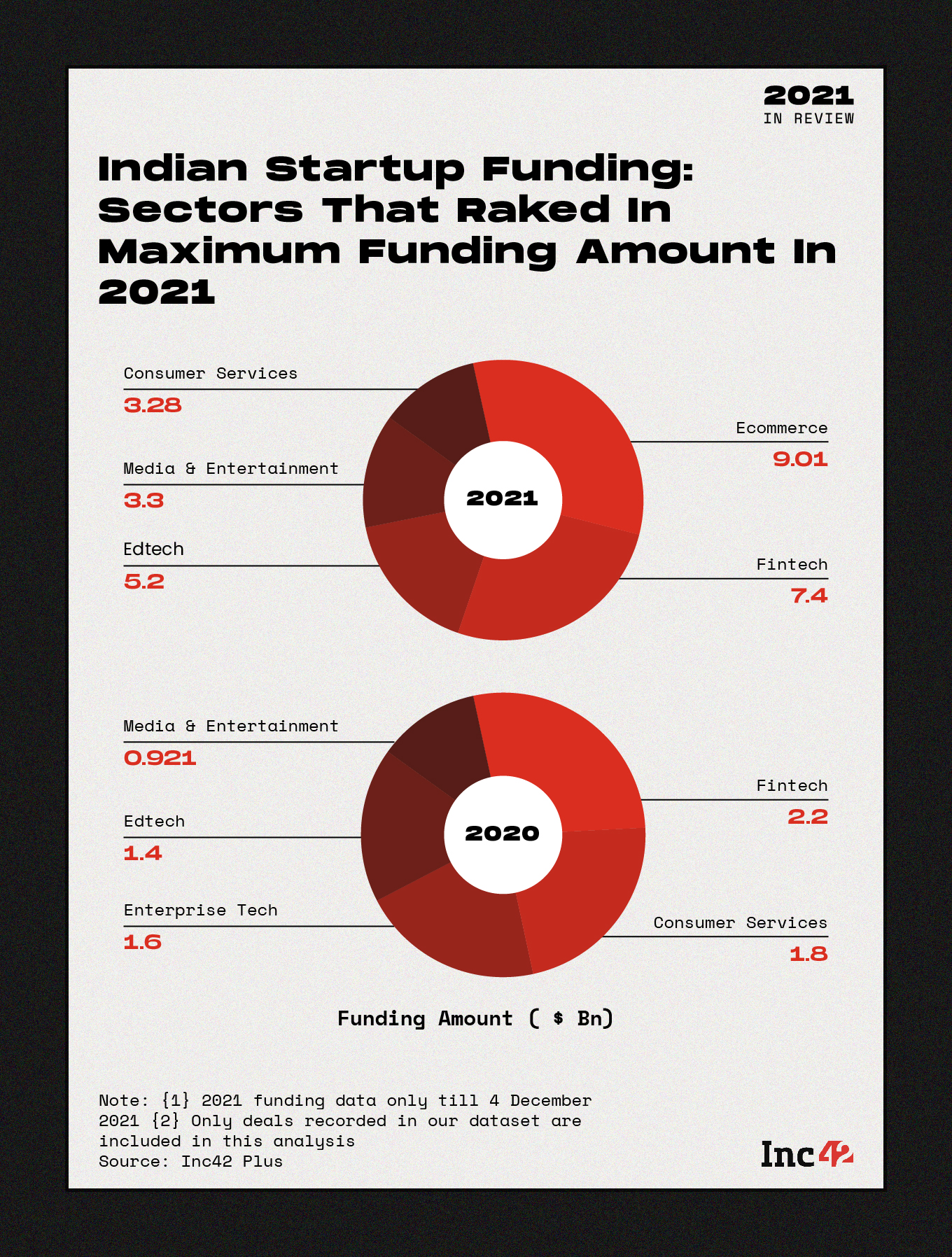 Fintech sector stood as the second-highest funded sector with $7.4 Bn funding mostly led by Pine Labs, Razorpay, and other neobanks. At present, the fintech sector is witnessing the highest number of startups trying their luck in the public market.

It started with Fino Payments Bank, then Policybazaar, but the sector lost momentum with Paytm’s poor listing, causing Gurugram-based Mobikwik to postpone its listing. All eyes are now on the 22-year-old Pine Labs which has secured close to $985 Mn this year and is likely to file its $1 Bn DRHP in the coming weeks.

The fintech sector was also the most funded sector in 2020 with a total investment of $2.2 Bn. 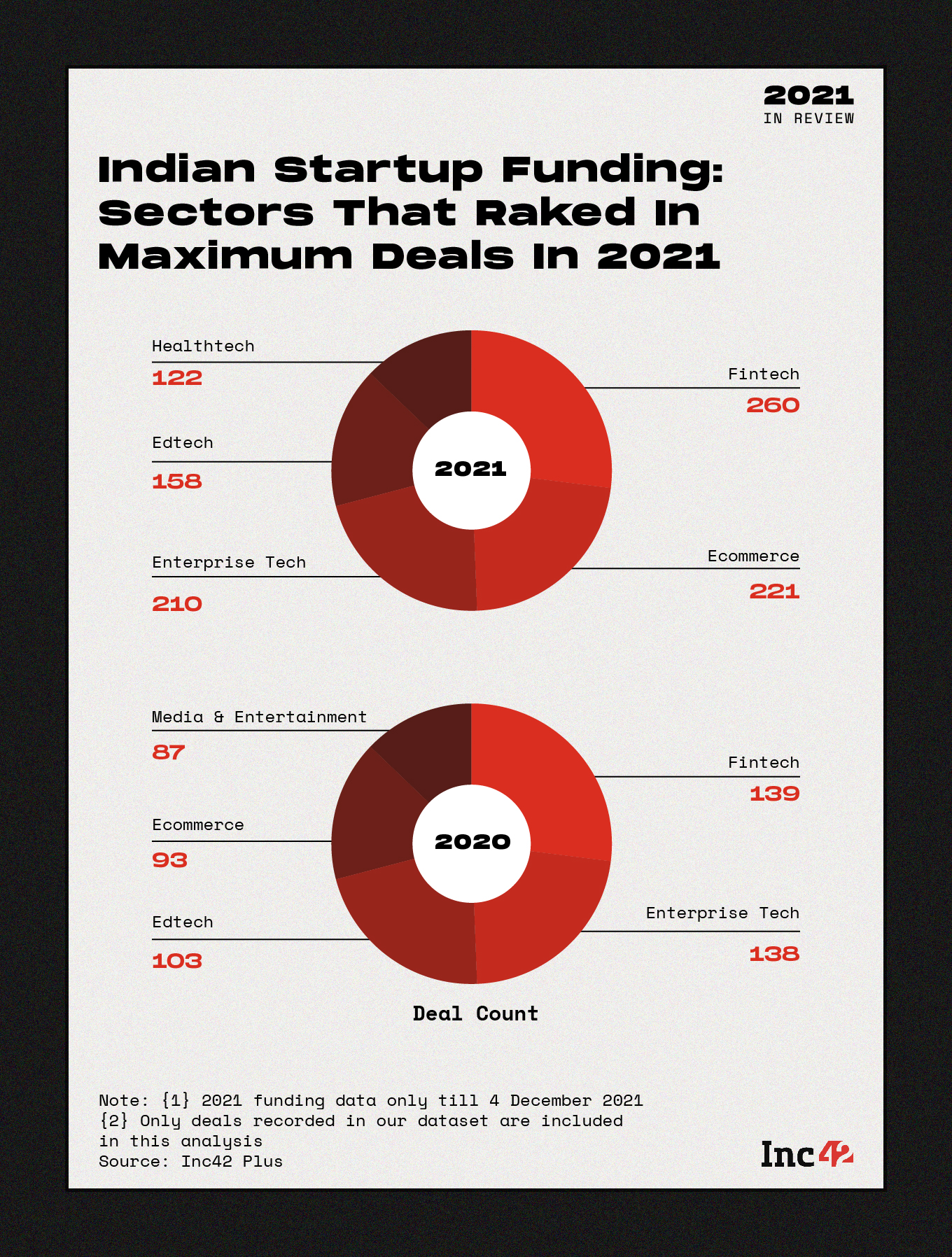 As the school and college continued to remain shut for most of the year, the edtech sector saw funds inflowing. In 2021, the edtech space was the third-highest funded sector with $5.2 Bn mostly led by BYJU’s Unacademy and Eruditus.  The year saw the rise of three unicorns – Eruditus, Vedantu, and upGrad.

When we talk about the deal count, the fintech sector again saw the highest number of deal count with 260 deals, meaning more and more fintech startups which are present across lending tech, payment gateways, insurtech, wealth management among others are receiving investment at a frequent rate.

The second sector which saw the largest deal count was the edtech space with 221 deals. With the rise of D2C brands, and the cut-throat competition of social commerce and quick delivery startups, the ecommerce sector recorded 210 deals.