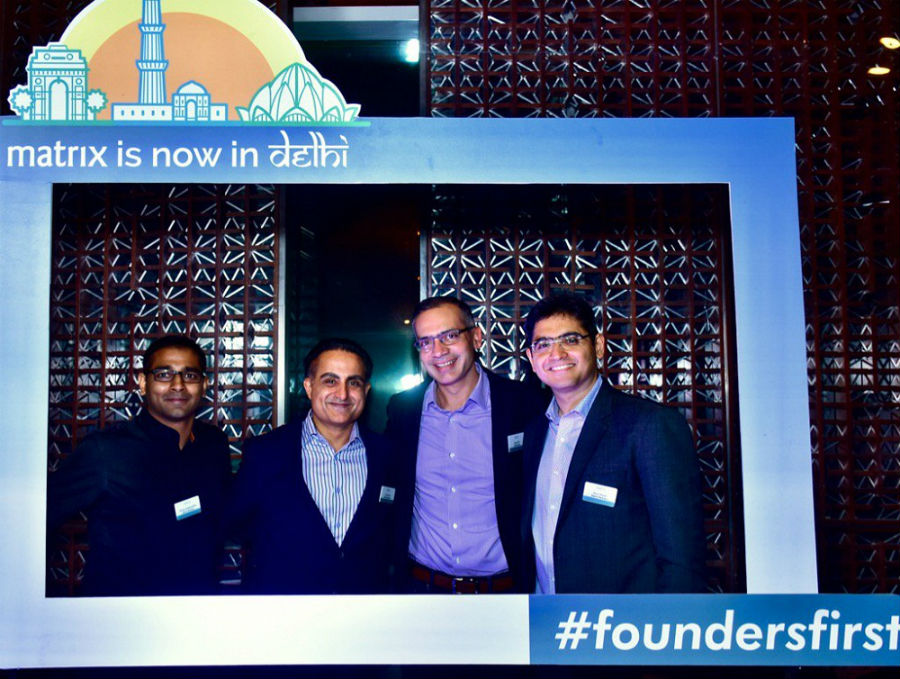 VC firm Matrix Partners inaugurated its Delhi office last month in order to increase its investments in Delhi-based startups. As mentioned by Managing Director, Tarun Davda, in past 18 months, 30-40% of the startups they have been meeting have been based in NCR. The firm is now looking to expand its consumer Internet portfolio as well as serve what it believes is an underserved market by investors. In this direction, Matrix Partners has moved three of its investors in the capital city to better connect with the startup ecosystem in Delhi.

Delhi-based startups have upped their ranks in the funding charts in the recent past with the success of Delhi-based companies like Zomato, Paytm, OYO to name a few. As per Inc42 DataLabs funding report for H1 2017, Delhi/NCR witnessed 128 deals and $2.129 Bn funding during January-June 2017.

The Delhi office is Matrix Partners’ third office in India after Mumbai and Bengaluru. The US-based private equity investment firm focuses on early stage and late stage ventures in the mobile-tech, consumer, healthcare, Internet and software space and invests between $2 Mn to $100 Mn. Its first India fund, of $150 Mn, was raised in 2006, and an additional $150 Mn was raised in 2007. The VC firm raised $300 Mn for its India-focused second fund in 2011 and then topped it with $110 Mn last April. Some of its biggest bets include Ola, Practo, Mswipe, Treebo, Quikr, Dailyhunt, and Razorpay among others. 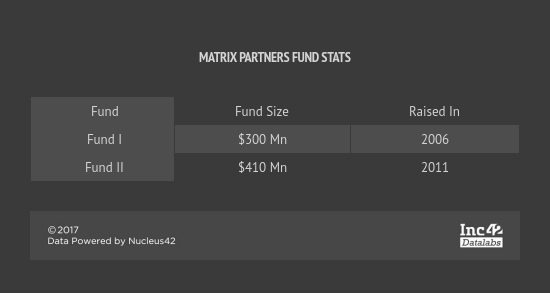 In a conversation with Inc42, Matrix Partners Managing Director Tarun Davda spoke in detail about why Matrix has set sights on Delhi, the focus of the firm this year, and its take on modern technologies like AI, VR making waves the world over.

Inc42: Why did Matrix Partners chose to open an office in Delhi now?

Tarun Davda: We were looking at our own internal sourcing data and we realised almost 30-35% of the companies that we were meeting were based in Delhi. And this number has increased in the last 12-18 months. Our team was constantly travelling to Delhi all the time. You see, in the number of deals that are announced, most are in Bengaluru and you don’t see too much coming from Delhi. There could be two reasons for that, either the quality of startups in Delhi is not good while there is still a lot of volumes. Or second reason could be that VCs are busy looking in Bengaluru so Delhi gets sidelined.

Our view is it’s not the former; it’s more likely the latter where VCs are busy in Bengaluru. So we thought maybe there is an opportunity that we are not looking at so far. Also, we are not witnessing that the largest value creation companies are in Delhi like an Oyo or a Zomato or a Paytm or a Hike. Or for that matter, even large public internet companies like MMT and Naukri. So even in terms of value, Delhi is moving ahead. So we felt when the deal volume has gone up as well as value creation has increased, we are potentially missing out on a big opportunity in Delhi.

Having a physical office ensures local startups can approach us easily as the general perception is that it’s easier for them to get a meeting with a VC in the same city. Then again, we have people in our teams who are spending 60%-70% of their time in Delhi. So it becomes sort of hard on productivity. The combination of all these factors and the fact that we also have a strong Delhi network made us believe it is the right time for us to be doing it.

Inc42: With an office presence in the Delhi startup ecosystem, what are the sectors that the Matrix Partners will focus on?

Tarun Davda: We are focused on anything that is sort of tech-led and tech-enabled, be it ecommerce or travel or SaaS. So we will continue to be bullish across all these sectors-anything which is Consumer Internet or mobile or SaaS. That having said, after meeting entrepreneurs in Delhi, we see that just like there is an affinity in the Chennai ecosystem to build SaaS companies and not too much Consumer Internet stuff comes out from there, Delhi entrepreneurs have a tendency to build products which have a little more commercial layer to it. Which is why you see, a Paytm or Zomato which either has a strong foothold in operations or a strong foothold in transactions. So as a natural result, those are the kind of companies that we will end up focusing on in the Delhi ecosystem. 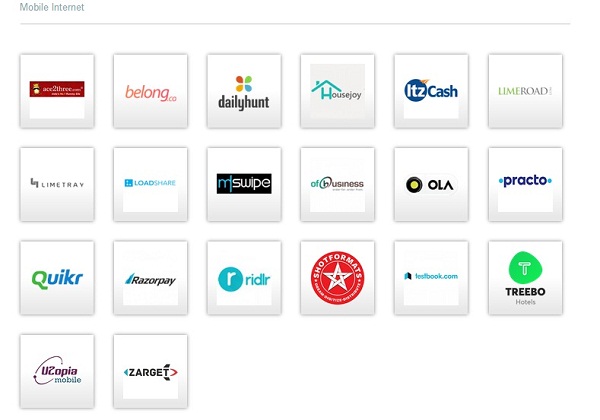 Inc42: Is Matrix Partners also planning to raise the third fund? What’s the status of second fund, how much corpus of the second fund has been invested so far?

Tarun Davda: We raised a $250 Mn second fund and then topped it up with another $110 Mn. So we are still investing from that. About 50%-60% of the fund has been invested. We are not planning to raise a third fund immediately. We have enough dry powder so maybe once we have completely invested from the current fund, we will look at raising a third fund.

Inc42: What are some of the trends that you have observed in early stage VC investing this year?

Tarun Davda: The most activity that we have seen this year is in Fintech. We have seen a lot of deal activity and a lot of value creation so much so that some people think it even could be a bubble. Also, in the last 12-18 months, given that consumer tech is going through a lull phase, we are seeing a lot of activity happening in the B2B business space. So B2B logistics which traditionally has been less sexy is witnessing a lot of activity. Especially as a result of GST, we see a lot of SMEs starting to adopt the technology. As a result, a lot of B2B companies are gaining traction.

Inc42: As a VC firm, what has been your focus this year?

Tarun Davda: We are “founders first” in every aspect of the way we think. Wherever we find an outstanding founder, regardless of sector, we are bullish on that. A sector by itself has no meaning unless you find someone outstanding who are building something in the sector.  Though of course as a team, we are structured to look into various sectors. So, for instance, I take care of SaaS or ecommerce or vertical classifieds or healthcare. 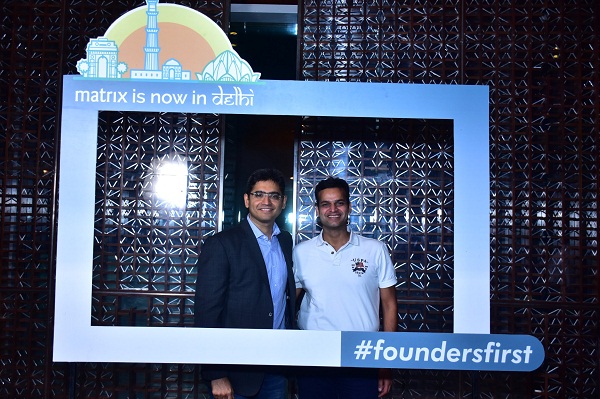 Inc42: What are some of the successful exits of Matrix Partners?

Tarun Davda: Itzcash is one of our successful exits this year. A year earlier we did a part sale of our stake in Cloudnine hospital chain and Quikr. We also had a big exit in women’s fashion brand W. Hopefully, there will be more to come in the next 6-12 months.

Inc42: What are the key things Matrix Partners looks for backing a startup?

Tarun Davda: Honestly it’s not very different from any other VC. We are looking for founders who are resilient, highly passionate and energetic, in it for the long haul, have a sense of emergency and want to solve the problem faster before anyone else does. Basically, founders who have a fantastic product or tech insight to build a scalable product. And who understand what it entails to build those sort of products. Founders who have a unique insight and may be at times have personally experienced the problem so that they have an appreciation for their end consumers and how they solve the problem. Every VC is looking for some form of this in an early stage team though of course, these are not easy things to pick up in conversation.

Inc42: What are some of the future technologies, as per you, that the VC community is looking to bet on?

Tarun Davda: While globally the talk is all about AI, Blockchain, AR/VR and self-driving cars, obviously in India, we are in a different life cycle of evolution right now. There are a lot more fundamental problems which people are solving right now. For example supply chain in the US is highly optimised whereas in India, the basics of the supply chain to move goods from one part of the country to another are still not formed. So it’s going to be a while before we start seeing those ideas come to India.

We are still building basic blocks whether its payment or logistics or getting people to come and transact online. A lot of the problems people are still solving today revolve around getting the basic penetration done. My own sense is that we are another couple of years away from the new age technologies.

With its new office in Delhi, it seems VC firm Matrix Partners is very serious on harnessing the emerging potential of the NCR region which over the last few months has emerged as an equally attractive destination as Bengaluru in terms of new startups. Currently, 50% of Matrix’s portfolio companies are based in Bengaluru (such as Practo, Quikr, Ola, Razorpay, Loadshare) while 15-20% are located in NCR (such as LimeRoad, OfBusiness). How much of a change in the composition of its portfolio will this move bring will be interesting to look at in the coming months.