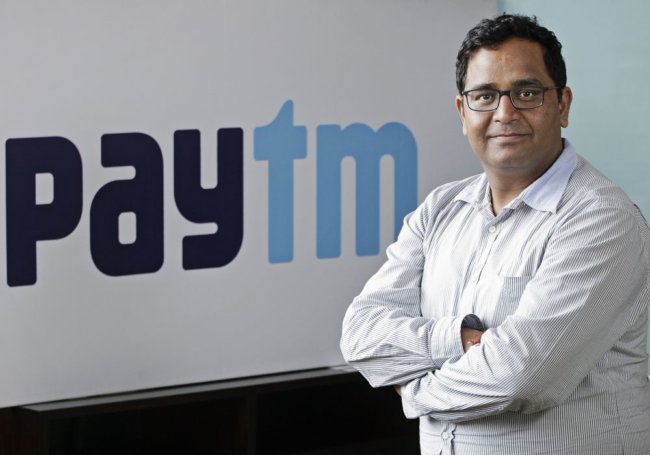 Paytm Payments Bank has reportedly raised $9.3 Mn (INR 60 Cr) from One97 Communications founder Vijay Shekhar Sharma and other existing investors. The development comes at a time when the firm is gearing up to launch its own debit card.

At the time of its launch in May 2017, the payments bank received an initial investment of $34.2 Mn (INR 220 Cr), with Sharma emerging as its majority shareholder.

As per a regulatory filing, the firm received the board’s approval on July 25, 2017. The document read, “The consent of the board is hereby accorded to issue on a right basis, 60 Mn equity shares of the company of the face value of INR 10 to the investor.”

Sharma has infused $4.6 Mn (INR 30 Cr) in Paytm Payments Bank, while One97 Communications has contributed around $3.5 Mn (INR 23 Cr). According to the company’s RoC filings, the remaining $1.09 Mn (INR 7 Cr) has come from One97 Communications India, a wholly-owned subsidiary of One97.

As part of the latest funding round, Sharma has been issued 30.6 Mn shares. One97 Communications has been allotted a total of 23.4 Mn shares. With the new investment, Paytm Payments Bank’s  authorised capital has increased to $62.3 Mn (INR 400 Cr). The firm’s paid up capital currently stands at $43.3 Mn (INR 278  Cr).

According to RBI directives, payments banks are not allowed to issue credit cards or loans to customers. These banks can, however, issue ATM cards, debit cards, net-banking, and mobile-banking. In keeping with these guidelines, Paytm Payments Bank is currently gearing up to launch its own debit card. Vijay Shekhar Sharma recently made the announcement on Facebook: 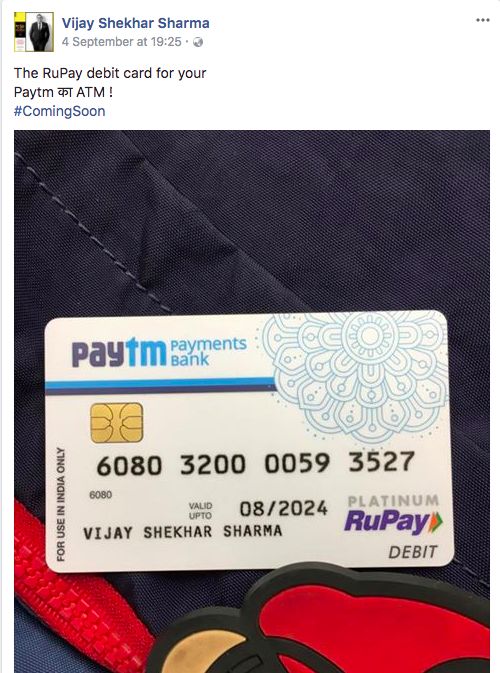 The Platinum RuPay debit card, according to Sharma, will be accepted across most online websites, apps, and stores. The card is designed to allow users to make payments through Paytm even on rival ecommerce sites that do not offer the option.

Additionally, the Paytm RuPay debit card will come with an array of Platinum benefits, including discounts and cashbacks across most online merchants. The card, Paytm founder Vijay Shekhar Sharma added, will be issued to all Paytm Payments Bank account holders at the time of account opening.

As per the details in the website, the debit card also includes free insurance cover of up to $3,116 (INR 2 Lakh) in the incident of death or permanent total disability.

Paytm Payments Bank is a mobile-first bank with zero charges on all online transactions and no minimum balance requirement. The firm’s head office is located in Noida.

In December 2016, One97 Communications issued a public notice that it would be transferring its wallet business, to the newly-incorporated payment bank entity. Later in January 2017, the parent company of Paytm received permission from the Reserve Bank of India to formally launch the Paytm Payments Bank.

To gain traction among the country’s banking population, the payments bank offered customers cashback of INR 250 on deposits of up to $387 (INR 25K). The offer was available for a few weeks post its launch. For savings accounts, the company currently offers an interest rate of 4% per annum, which is slightly lower than the interest rates of Airtel and India Post.

Paytm has also revealed plans to open 31 branches and 3,000 customer service points in a year. According to Vijay Shekhar Sharma, the goal is to reach 500 Mn bank accounts by 2020. As per reports, Paytm Payments Bank is gearing up to team up with universal banks to expand the reach of its financial services.

In 2016, the RBI offered its in-principle nod to 11 entities for establishing payments bank operations in the country. Paytm was initially planning to launch the Payments Bank around Diwali last year, in November 2016, but Airtel beat Paytm to become the first payments bank in the country to go live. The pilot of its Payments Bank Limited (“Airtel Bank”) commenced in Rajasthan. Later in January 2017, Airtel finally began operations in 29 states. It currently offers the highest interest rate of 7.25 % p.a. on deposits in savings accounts.

In the first week of June, payments bank licensee Fino Paytech received approval from RBI, for a nine-member-board of Fino Payments Bank. It received the final nod from RBI on March 31, 2017, to start the payments bank. As per an official statement, the company claims to have 28 Mn active banking customers spread across urban and rural areas. It provides a range of financial services including savings, remittance, insurance, credit etc.

Around the same time, it was reported that Aditya Birla Group was planning to launch its payments bank through the newly formed Aditya Birla Financial Services. Sushil Agarwal, Whole-Time Director and Group CFO, Grasim Industries confirmed the development, given the fact that Idea recently merged with Vodafone, one of the entities will eventually surrender its licence post merger and tie-up ABFS.

The latest investment of $9.3 Mn will likely go into expanding the reach of Paytm Payments Bank among India’s banking population. Whether the Paytm RuPay debit card facilitates growth is something that will become apparent in the near future.