2019 In Review: Bollywood Celeb Investments In Startups This Year

2019 In Review: Bollywood Celeb Investments In Startups This Year 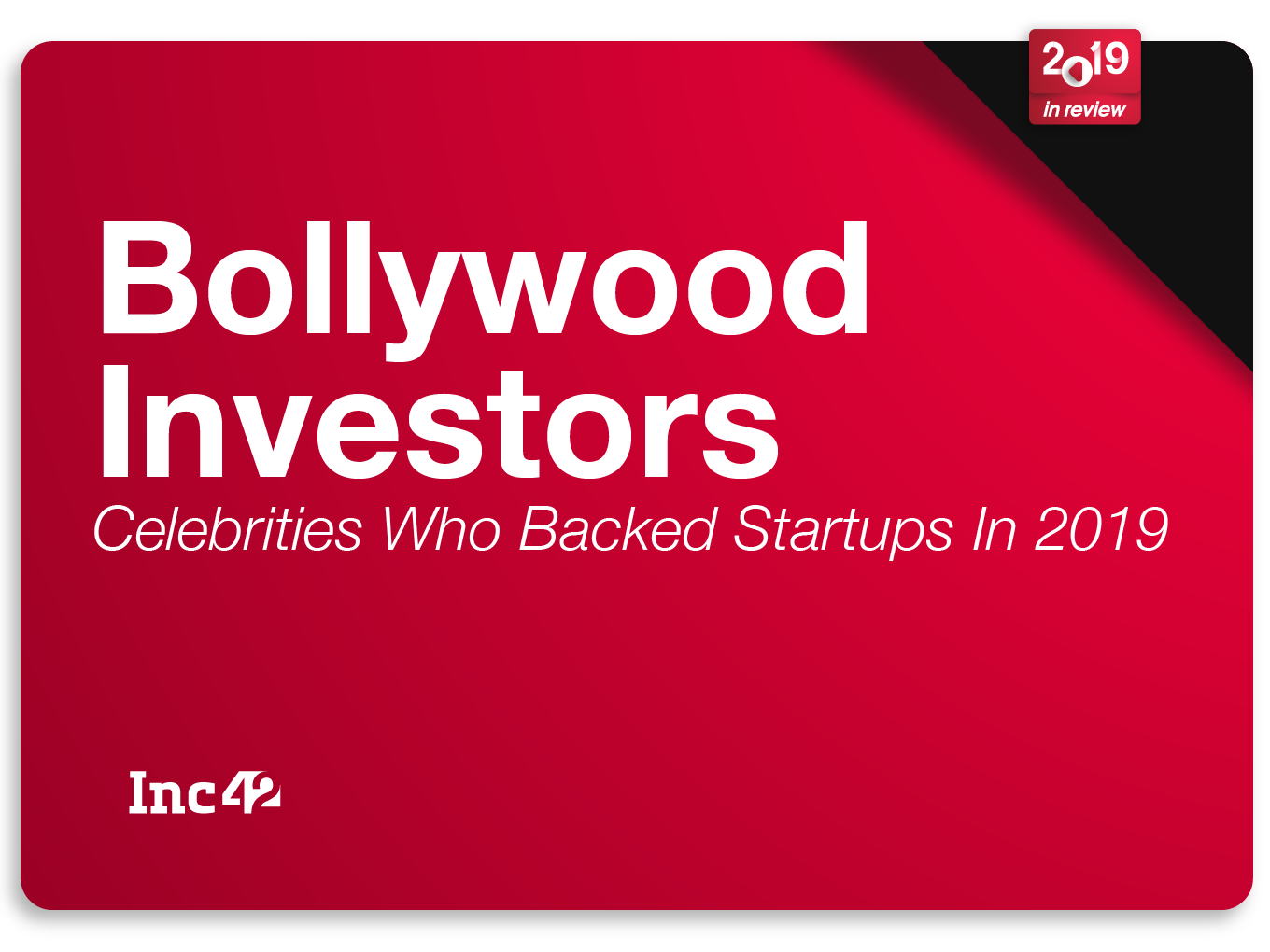 Following the legacy of these veteran superstars such as Shahrukh Khan, Amitabh Bachchan, Madhuri Dixit, new-age Bollywood actors such as Ayushmann Khurrana, Deepika Padukone, and Arjun Kapoor became angels for some of the startups in 2019,

This article is part of Inc42’s special year-end series — 2019 In Review — in which we will refresh your memory on the major developments in the Indian startup ecosystem from international collaborations to celebrity investments and their impact on various stakeholders — from entrepreneurs to investors. Find more stories from this series here.

The startup ecosystem has taken on a new dynamic in India as startups are entering everyday conversations. From receiving investments from large family houses and venture capitalists, startups have also learned to bring in glamour and entertainment. In addition to promoting ventures through ad campaigns, celebrities, who are working in the entertainment industry, across the world are now realising that the real proposition lies in investments and entrepreneurship.

Following the legacy of these veteran superstars, new-age Bollywood actors such as Ayushmann Khurrana, Deepika Padukone, and Arjun Kapoor became angel investors for some of the startups in 2019. Also, besides her big fat wedding, India’s desi girl Priyanka Chopra also made headlines in the startup ecosystem this year.

With a strategic partnership with Mumbai-based FMCG health food brand, Epigamia, Bollywood actress Deepika Padukone forayed into the startup ecosystem. The investment by Padukone came as an extension of the Series C funding round of Epigamia, which was led Verlinvest, Danone Manifesto Ventures, and DSG Consumer Partners.

Founded in 2015 by Rohan Mirchandani, Uday Thakker, Ganesh Krishnamoorthy, and Rahul Jain, Epigamia started as a Greek yoghurt brand. In its four years of journey, the brand has added other healthy F&B products, such as artisanal curd, snack packs, Indian sweets, and smoothies, to its kitty.

In addition to becoming an angel investor, Padukone also started her entrepreneurial journey with women focussed fashion label All About You and an NGO, Live Life Foundation.

Famous for his athletic lifestyle on and off the screen, Bollywood actor Akshay Kumar’s investment journey followed his lifestyle patterns. Kumar, in June 2019, invested in Mumbai-based wearable tech startup, GOQii.

As part of this deal, Kumar also joined the company’s board as an investor and strategic advisor. Kumar is also hosting one of GOQii’s health education initiatives, India Health Quiz, on the mobile app. The actor will also conduct live coaching sessions on GOQii Play.

Sidelining from Bollywood, former Miss World and Bollywood actor Aishwarya Rai Bachchan started her journey as an angel investor with an investment in Bengaluru-based environmental intelligence startup Ambee. Rai along with her mother Vrinda KR invested INR 50 Lakh each in Ambee.

Founded by Akshay Joshi, Jaideep Singh and Madhusudan Anand in 2017, Ambee provides hyperlocal air quality data. The data is then made accessible to developers, consumers, health researchers and media companies. For tracking the air quality data, the platform uses proprietary data and analytics to help customers make informed decisions or take preventive measures in a situation of severe environmental distress.

Founded by Vedant Kanoi, Shamit Khemka, and Sanjhi Rajgarhia, the food delivery platform runs on the premise of home cooks delivering hygienic and home-cooked food to customers from their kitchens.

On bringing Kapoor onboard, Kanoi said that having a “socially conscious youth icon” like Kapoor’s support is a dream come true. “He has enjoyed the homemade food by our talented home chefs in Delhi and we’re excited to have his support to grow our initiative to new cities,” he said.

2019 has been arguably the most happening year for Bollywood actor Priyanka Chopra. She became one of the Bollywood’s representatives to invest in international startups.

This year, Chopra made investments in the alternative college education startup Holberton School and dating app Bumble. Founded in 2015 by Julien Barbier, Rudy Rigot and Sylvain Kalache, San Francisco-based Holberton School is a project-based alternative to college for creating the next generation of software engineers.

Moreover, her other investment, Bumble, was founded by Whitney Wolfe Herd in ‎2011 as a “feminist dating app”. In a tweet, Chopra had said that she is honoured to join the two companies that are striving to expand gender diversity in the tech space and make a social impact for the greater good of society.

Singer Sukhbir Singh also made a noise in the startup ecosystem with his investment in Gurugram-based beverage startup, LQI. Singh participated in the $200K funding round of this startup.

Founded in 2016, LQI uses their proprietary technology for the production of its branded smoothies, milkshakes and fruit water frozen packs made with 100% raw fresh fruit with an increased shelf life of 2.5 months without the use of any colours, flavours, purees or preservatives. Shubham Khanna, Palak Kapoor and Kapil Kumar are the founders of this startup.

The singer didn’t stop by making a single investment and hence made his other investment in Amritsar-based electric bike rental company eBikeGo. Founded in 2017 by Dr Irfan Khan, eBikeGo currently operates in Delhi, Amritsar, Jaipur, Jalandhar, and Agra.

With an investment in Gurugram-based male grooming startup The Man Company (TMC), Bollywood actor Ayushmann Khurrana, who is well-known for his unique characters on the screen, started his 2019’s entrepreneurial journey.

Bollywood actor Rana Daggubati, famous for playing the role of villain in multilingual epic Bahubali series, also made buzz in the startup ecosystem by launching an accelerator platform Urban-i.

Launched in partnership with early-stage VC, Anthill Ventures, Urban-i is a market access programme focused on accelerating the business growth of consumer brand startups in India.

The platform will serve as a strategically designed platform to bring together capital, consumer brands and celebrities under one platform. Speaking to Inc42, Rana Daggubati, said that the platform will help startups in finding the right marketing approach for the selected startups.

Though most of the Bollywood actors have started their entrepreneurial journey from clothing brands, Katrina Kaif, this year, has grown her passion in founding cosmetics brand Kay Beauty.

Kay Beauty is Nykaa’s second big celebrity collaboration after it has partnered with designer Masaba Gupta for an exclusive cosmetic range.

As of now, Kay Beauty is offering a wide range of eye and lip products and Kaif claims that so far the brand has received a positive response which will help it to foray in other beauty segments such as skincare, haircare, among others.

Popularly known as Big B of Bollywood, Amitabh Bachchan was the recent Bollywood celebrity to ring the bells the startup ecosystem. The veteran actor has invested in $28 Mn funding round of Mumbai-based edtech startup Eduisfun. Other angel investors such as HDFC chairman Deepak Parekh, Ogilvy Group chief creative officer Piyush Pandey and PwC partner – assurance Russel Parera also participated in this round.

Founded in 2014 by Praveen Tyagi and Jatin Solanki, Eduisfun develops gamified educational applications for school children belonging to CBSE and ICSE curriculums. Eduisfun’s flagship product STEPApp is an experiential learning platform that has been designed for students of private, central and tribal schools. Notably, the app even works on basic smartphones even with low data connectivity.