Priyanka Chopra’s investment is a part of $8.2 Mn round of funding for Holberton that closed in April 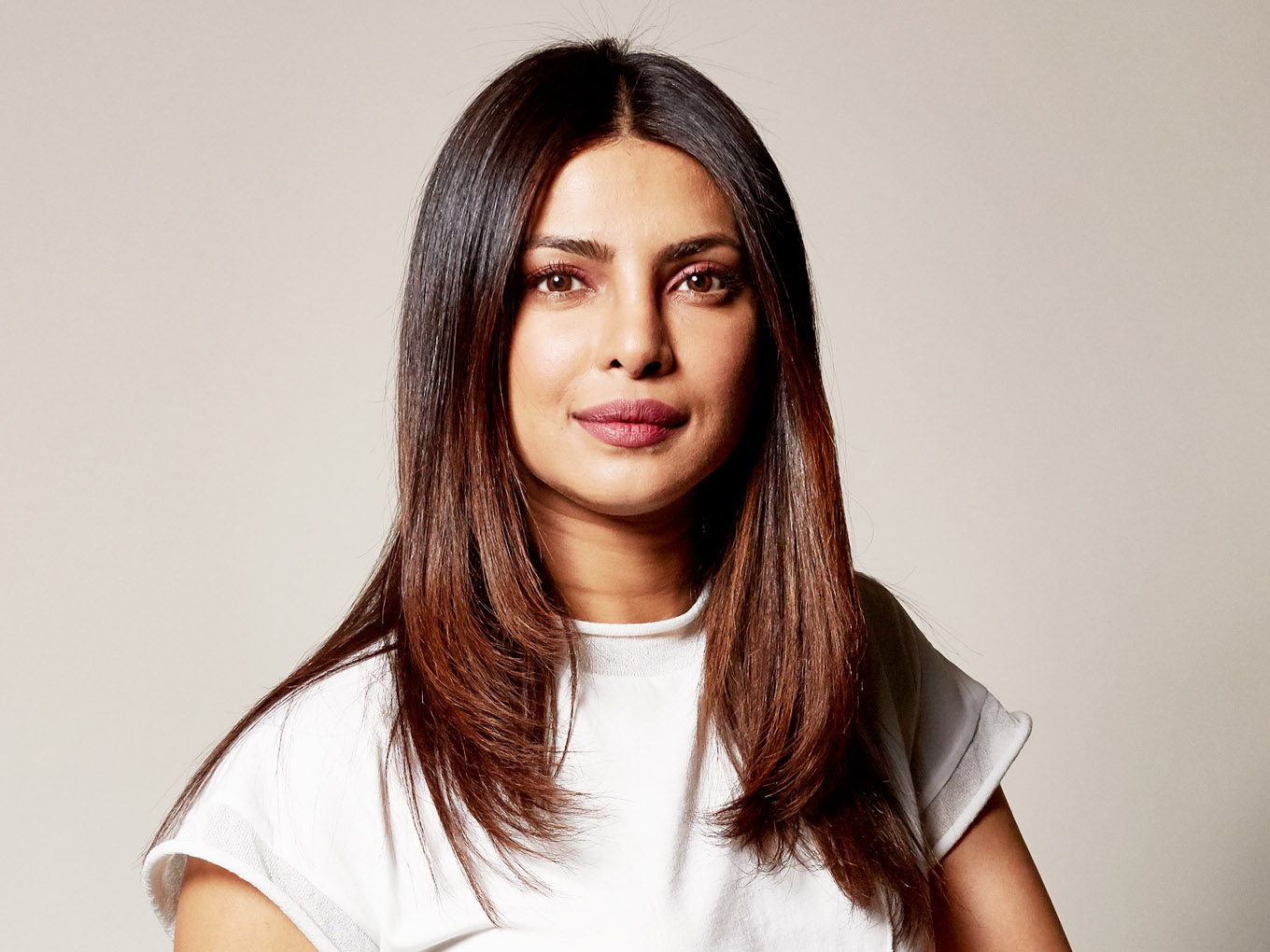 Bollywood actress Priyanka Chopra doesn’t cease to make the news. The actress, who shifted base to Los Angeles after making inroads into Hollywood with Quantico and Baywatch, has been all over the headlines for her recent high-profile engagement with American singer-actor Nick Jonas. Now, surprising the world again, the actress has announced her investment in two US-based startups — alternate college education startup Holberton School and dating app Bumble.

San Francisco-based Holberton School was founded in 2015 by Julien Barbier, Rudy Rigot and Sylvain Kalache as a project-based alternative to college for the next generation of software engineers.

In a tweet, Chopra said that she is honoured to join the two companies that are striving to expand gender diversity in the tech space and make a social impact for the greater good of society. 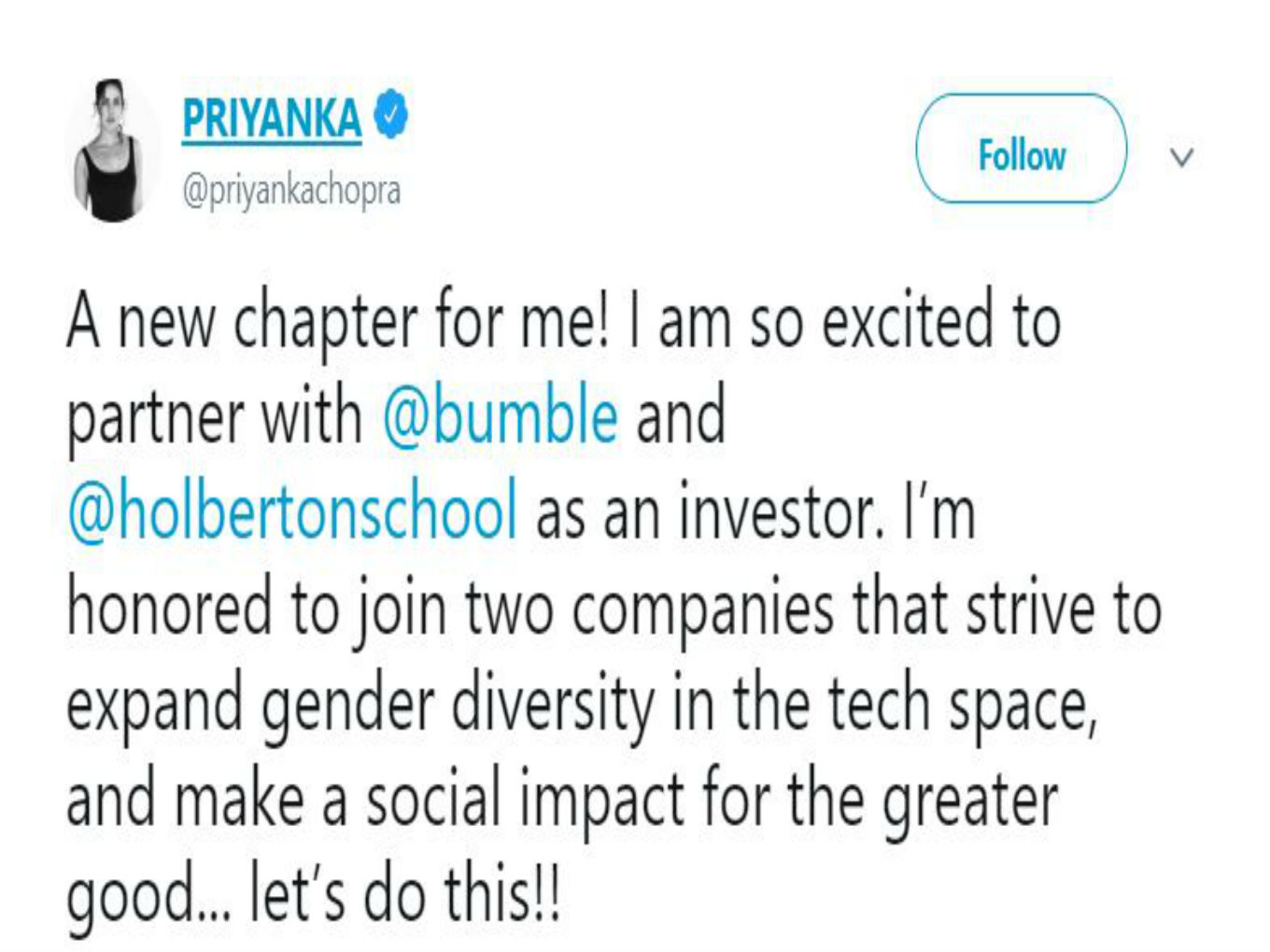 Bumble has announced that it will now officially launch in India this fall after spending the past nine months building a local team, defining a go-to-market strategy, and engaging key partners in the market.

Further, in a blog post, Bumble shared that for the upcoming expansion into India, Chopra will play a pivotal role as she joins as partner, advisor, and investor for the company.

Bumble and Priyanka Chopra first began collaborating for the launch of the networking mode Bumble Bizz in October 2017.

“I’ve always believed that investing in women is key to social transformation and economic growth, and in working with Whitney and her team over the past year, I’m inspired by the real, positive change Bumble is creating and I’m proud to have the opportunity to contribute to this movement as a partner,” Chopra said.

Also, large-scale marketing and events hosted by Bumble and Chopra will kick off in major markets this fall, with sustained activations taking place across a range of other major metropolitan markets.

Bumble has also localised the user experience with versions of the app available in both Hinglish and Hindi for iOS and Android.

As she toured the San Francisco home of her new portfolio company Holberton School, Priyanka Chopra told New York Times “Geeks are taking over the world, if they haven’t already.”

Priyanka Chopra’s investment is a part of $8.2 Mn round of funding for Holberton that closed in April.  She will join the company’s board of advisers and is looking to make an effort to help change the tech industry’s gender disparity.

Prior to Chopra, musical performer Ne-Yo had invested in Holberton and had then promoted the school to his fans which led to increase in applications from underrepresented minorities. Now, two-thirds of Holberton’s students are people of colour, and 30% are women.

Priyanka Chopra also plans to promote Helbortonl to her fans. She also emphasised her support for Holberton’s mission to educate people from underprivileged backgrounds.

She also plans to further invest in companies with an element of social impact, and companies founded by women.

Chopra’s advocacy for social causes comes in line with her associations with United Nations under which she also serves as a UNICEF Goodwill Ambassador and is involved in a number of efforts to protect children’s rights and promote the education of girls in India.

Startup Investor Is The New Trend In Bollywood

The glitz and glam of Bollywood has been crucial for glamour in everything nowadays. From TV commercials to store launches, Bollywood stars have been bringing limelight to the brand.

At the same time, while promotions have become part and parcel for a brand, Bollywood celebrities have also time and again wore the hats of investors.

Among early investors in the lifestyle sector from Bollywood are Karishma Kapoor, Ajay Devgn, and Shilpa Shetty. Karishma Kapoor had invested in a kids clothing and accessories portal Babyoye in 2011.

Amitabh Bachchan, Shahrukh Khan, Akshay Kumar and Salman Khan are some of the names that are in demand for brand endorsements in the startup ecosystem.

Recently, John Abraham picked up a minority stake in a Mumbai-based chain of health, wellness, and beauty stores, Guardian Healthcare.

As the star-studded startup ecosystem looks to grow wider and smarter, associations and investments to support gender diversity and women entrepreneurship along with support for underprivileged sections of society by Priyanka Chopra has made us more excited than her engagement with Nick Jonas!