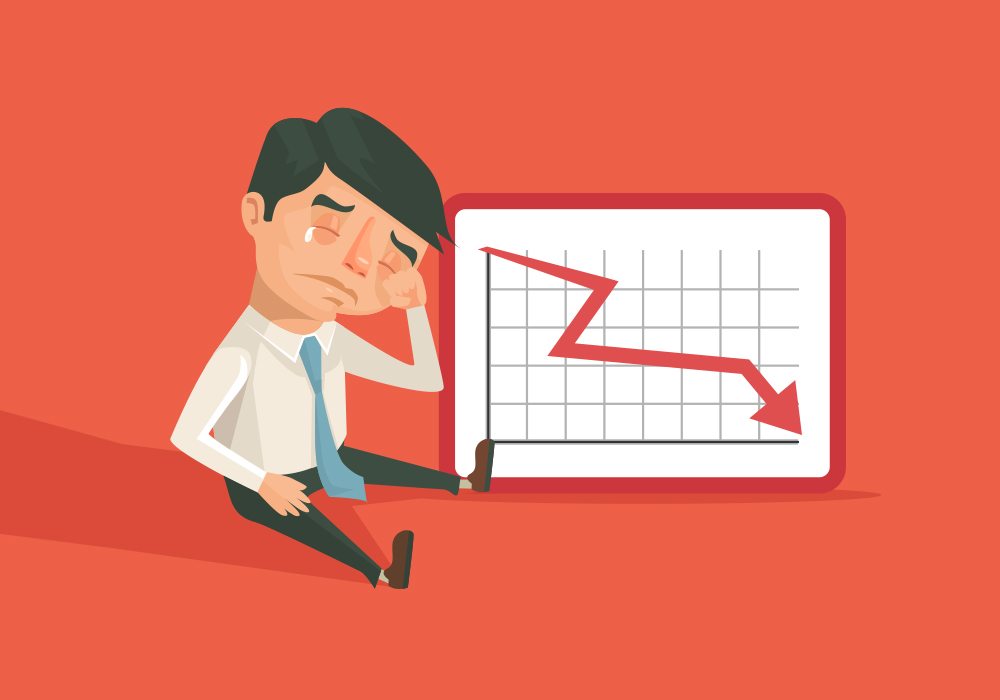 The year 2015 saw launch of three to four startups a day, which helped India to secure the third position in the world in terms of number of startups – 4200 and counting. Last year, a huge amount of money was poured into the startups—on very high valuations—with ideas that were building just the “me too businesses”.  With no defensibility, weak business metrics, and entrepreneurs, who were largely opportunistic, a lot of startups entered the ecosystem and even got considerable attention from investors.

Not to forget that funding is not equal to success. On one hand some startups are busy raising money, on the other hand funded startups are moving towards closure. While in 2015, 14 startups reported shut down, the first 5 months of 2016 has already seen over 18 shutdowns.

Out of the total 18 startups that shut shop, 4 startups were operating in the food-tech space, 4 in hyperlocal and 2 in fashion. Moreover, out of all, 15 startups were funded and just one startup was above Series A stage.

Let’s take a look at some of the startups that shut their shop and moved on:

Funding: INR 3.1 Crore from YouWeCan Ventures, Sachin and Binny Bansal at a valuation of INR 170 Crore

Rahul Yadav’s most talked about new startup, Intelligent Interfaces, shut down its operations just few months after raising funding. As per Yadav, Intelligent Interfaces was supposed to provide intelligent data aggregation and visualisation solutions to the Government of India, to make governance 100 times more efficient. Even after 7 months since the launch announcement and about 5 months after the funding announcement, no one knew what the company was doing. In a recent status update on Facebook, Rahul had mentioned that the startup was not working out. Apparently, Rahul has registered three more companies in the past few months.

Fashionara was an ecommerce portal that focused on categories such as apparel, footwear and accessories. Earlier in 2015, it launched an Android app with the flash sale model. The startup has been reported to shut shop. Its website has not been working for the last few days and there is not much update on its social media channels. Co-founder Darpan Munjal has also left the company in January this year and is currently working at Squadhelp.com. The startup did not clarifyr the reason for shutting down its operations. On the other side, Bejul Somaia of Lightspeed, one of Fashionara’s investor, stated that Lightspeed has exited from the company sometime back.

Delivree King was a Delhi-based ecommerce focused logistics services provider. It provided on-demand delivery & discount coupons with every parcel. The startup has now closed its operations as it was unable to raise fresh funding. The startup founders said that it had scaled to about 15 cities but it was becoming difficult to sustain operations at that level with no funds. Neeraj, founder of Delivree King, has now joined as Chief Obstacle Officer at YumBox.

Funding: Seed fund of $25K from the Shell Foundation. It had plans to raise about $3 Mn.

AutoRaja was a Chennai-based auto rickshaw aggregator. It provided auto over call, SMS, Whatsapp, or mobile application, to the users. The startup wound up its services from the city due to lack of funds and inability to sustain amidst competition. The top officials and the remaining fleet has reportedly joined Ola.

FranklyMe was a video micro-blogging platform. The startup also had a B2B offering, where it made mobile and desktop web Q&A widgets for news, content sites. Its operations were shut down in February. The startup stated that it had to shut shop as it was not able to achieve sustainable product/market fit. It also raised an undisclosed Pre Series A round of funding from new as well as existing investors in January 2016. After shutting down, the company had returned the remaining funds back to the investors. In November 2015, it laid off employees citing that it had pivoted from a celebrity Q&A platform to a more horizontal video social network.

Tooler was an on-demand Delhi-based laundry startup. It provided easy pickup, washing & ironing of clothes with doorstep delivery within 24-36 hours. The startup had stopped taking orders since February and the website is now inactive. Its social media pages are also inactive since January. Sukanth Srivatava, one of the co-founders of the company, who is now working at RailYatri, confirmed that the startup has shut shop. It is speculated that the startup was unable to sustain without follow on funding.

Zippon was a Bangalore-based packing and moving service that provided low-cost relocation logistics services. It provided real time prices, online price comparison, pre-screened logistic solution providers, real time tracking, transit insurance and affordable prices. The startup shut shop as it could not raise fresh funding. Also a proposed deal to sell out to a larger rival fell apart at the eleventh hour. The co-founders have sorted out new roles for themselves. Venkatesh moved on to start an online email marketing company called Zippmail, Sachin launched a construction firm christened Buildora and Shakir has now started working with Oracle. In September last year, New Delhi-based Turant Delivery, an on-demand logistics aggregator for relocation services, was close to seal the deal to acquire Zippon. However, the deal fell apart.

Funding: Seed funding of $1 Mn from investors including Robin Uthappa

Online meal service provider iTiffin offered tiffin based on a defined calorie count requirement. The startup followed a subscription-based business model. iTiffin has now stopped taking orders and advised employees to look for jobs. Its website has been inactive since March 25. The company has apparently told employees that the portal might resume operations in May. A message on the website reads: “We’re taking a break to re-work. We’ll be back.”

EazyMeals was a food tech business that provided on-demand food in Delhi-NCR. Harshdeep Rapal, who incubated and ran EazyMeals, said that they decided to shut operations after eight months. He said that the startup was in talks with a few investors to raise the angel round but then decided to shut the business down and write off the investment. He did not share the reason for the same.

Funding: $2 Mn from investors like Matrix Partners and India Quotient

Purple Squirrel was a Mumbai-based ed-tech startup that connected students with industry partners for field visits, workshops and hands on practical experiences. It has shut down its operations citing continuous dipping sales and increasing cash burn rate. The team was dealing with these issues for the past few months.

Klozee was a Bangalore-based online apparel rental platform that allowed customers to access apparels on rent. The startup has shut down its operations pointing to the challenges faced by players in the pre-owned apparel sale and rental space in India. The three co-founders have now joined home decor marketplace Livspace.

Zeppery was a restaurant food pre-ordering app that allowed users to pre-order food at restaurants and other food outlets. It decided to shut shop just after six months of commencing operations. The founders stated that they were trying to copy Tapingo, a US-based startup, but realised that this model was too early for the Indian market and the customer retention costs were too high.

Delhi-based Murmur app, earlier known as Bluegape, launched itself as a platform where anyone could make collaborative listicles with visuals. It rebranded to Murmur in November 2015. The app has now shut down. Two of the company’s investors confirmed the development. The reason for shutdown is not clear, however, the company was in talks with Times Internet for an acquisition but the deal fell apart.

Mumbai-based home food delivery startup ZuperMeal provided home-cooked meals. The startup has apparently closed down its operations in just eight months after it raised seed funding. The startup’s app is showing error while downloading and its website is also not working. Though the founder did not clear the reason for shutdown but Balasubramanian has reportedly joined logistics startup LogiNext as vice president.

Funding: Undisclosed amount in seed funding from some HNIs

MovinCart was a hyperlocal grocery delivery app that shut down its operations some time back. Co-founder Rajat Jain quit the company in January, the other two co-founders, Nikhil Gupta and Anurag Meena, set up a logistics-tech platform, under CloudPlay Technologies.

ClassVerse was a Delhi-based startup that provided access to fitness studios, classes and gyms to users for a monthly membership fee. It also offered access to activities such as zumba, cycling, yoga, dance, kickboxing, bodybuilding, swimming, badminton, tennis and others. The founding member said that it closed operations as it was difficult to achieve unit economics.

Amber Wellness was an on-demand online beauty startup. The startup has shut down just after a few months of operation. The startup has stopped services in all three cities, viz. Bangalore, Delhi and Mumbai, due to low margins. The founders said that we are not shutting down the company but are exiting the domain as on-demand businesses are going out of fashion.

Tushky was an online marketplace for discovering and monetising leisure activities. The startup has quietly stopped operations after it failed to scale up and raise further funding. Co-founder Talvinder Singh has now joined Oyo.

Let’s take a look at some of the startups that have shut some divisions:

Flipkart shut down its grocery delivery division Nearby that was launched in October last year in Bangalore. It noticed that the hyperlocal delivery market is less evolved, where demand is low and differentiation almost non-existent.

Ola launched its bike as a taxi service in March. However, within a day, Ola faced law infringement notice from Karnataka State Transport Department for violating the Motor Vehicles Act and continuing to operate without requisite permission. Consequently, the company quietly withdrew the bike taxi icon from the app and the service was no longer available. It stated in a tweet that they were currently working on its bike services and will keep posted once they are up and running.

Ola shut down its food delivery service ‘Ola Cafe’, which it launched in March 2015. The company made a formal announcement on its blog.

Ola Store was shut down in early March 2016. Ola had started beta testing of its app ‘Ola store’ for grocery and daily needs in June 2015.

On-demand grocery delivery startup PepperTap roll-backed its consumer-centric grocery app. The company has now pivoted to a full stack ecommerce logistics company. Earlier, in February, it had shut down business in larger cities such as Ahmedabad, Chandigarh, Mumbai, Kolkata, Chennai, and Jaipur. Before that, in September 2015, it had rolled back operations in Agra and Meerut due to non-acceptance of the concept in the markets.

Chat-based personal assistant app Helpchat closed down its chat wing and fired close to 100 people. The fired employees are a part of the chat operations and quality team as confirmed in a blogpost by founder Ankur Singla. The company decided to phase out chat from the app and create the same level of experience using automation and simple user interfaces. The company was initially launched as a complaint resolution platform called Akosha. It had pivoted last year to a chat based personal assistant.