A curious thing is happening in early stage startup funding in India. The angel investor pool has a new look to it, with creators and influencers now sharing space with startup founders and individual investors.

From comedians to influencers to YouTubers — creators of all kinds are now jumping on the startup investment bandwagon, which reflects the changing dynamics between consumers and content makers. Before we dive into that, here are the other top stories of the week gone by:

From Creators To Angel Investors

Growth School, Wint Wealth, HYPD — just in the past week, at least three early-stage startups have raised funds from creators such as Bhuvan Bam, Tanmay Bhat, Ranveer Allahbadia, Akshat Srivastava, Raj Shamani among others. Interestingly, the business model of all three companies revolves around creators such as their investors. But influencers are looking at more than just creator ecosystem startups and at the broader consumer tech investment opportunity. How Founders Approach Creators: There are two kinds of startups that are leveraging creators these days — those building for the creator economy and those that have consumer businesses that have high affinity with content.

In that sense, creators are strategic investors for some of these startups, according to HYPD cofounder Akshay Bhatnagar. He added that it’s not unlike some brands or startups raising money from Kunal Shah or Vijay Shekhar Sharma when they add meaningful value to the cap table.

The startup’s other founder Ashwarya Garg added that as content-led commerce has boomed in the past couple of years, it only makes sense to leverage this fully by giving some stake to creators who know this space the best.

Garg says that it’s not just about social commerce or other creator economy startups, but also about consumer-facing businesses. All of them need the distribution and the reach that creators offer, and many of them have the same target audience as the creators, so there is a natural alignment of sorts.

The Question Of Due Diligence: “A creator with skin-in-the-game is like a Chief Marketing Officer,” says public speaker and influencer Raj Shamani, who has invested in startups such as Mainstreet, Growth School, Wint and others.

An investment is not a brand endorsement deal, and there’s a whole lot to consider and evaluate before putting money into a startup. And once that investment is made, the creator-investor also has to be aware of how that particular startup is evolving, its growth and more.

Shamani believes that while due diligence is critical, when the business model is not clear, he consults other angel investors about the potential investment. “Every month I check up with the founders on what’s going on, whether there is something I can help them with, something I can help them distribute. It’s about staying aware,” he told Inc42.

Of course, no one first approaches creators to become investors, instead the relationship is born from some problem statement that the creators can help solve. In the case of Growth School, founder Vaibhav Sisinty connected with creators to become mentors for the edtech startup. That turned into long-term partnerships and then investments.

But now, more and more companies are being upfront about wanting creators on their cap tables.

The Next-Gen Creator-Investors: What’s needed now is the enabler ecosystem around creator-investors. In the US, we have seen passion economy investors such as Atelier Ventures that want to turn creators into angel investors.

Something like that would unlock opportunities for the under-tapped regional language creators. These creators need someone to educate them, otherwise they end up following the herd or their peers with investments.

One creator told me that while so far there is no official program to connect VCs and creator-investors, there are some signs of that changing. “Some months back I got a call from a top VC fund to ask me about my investment in a startup. It was unusual because this has not happened before.”

Perhaps, the tide is changing.

🦄 New Unicorn: Dealshare has joined the unicorn club after its $165 Mn Series E round at an estimated valuation of $1.62 Bn
💰 Overall, the past week saw $1.9 Bn in total funding and 67 funding deals in all. 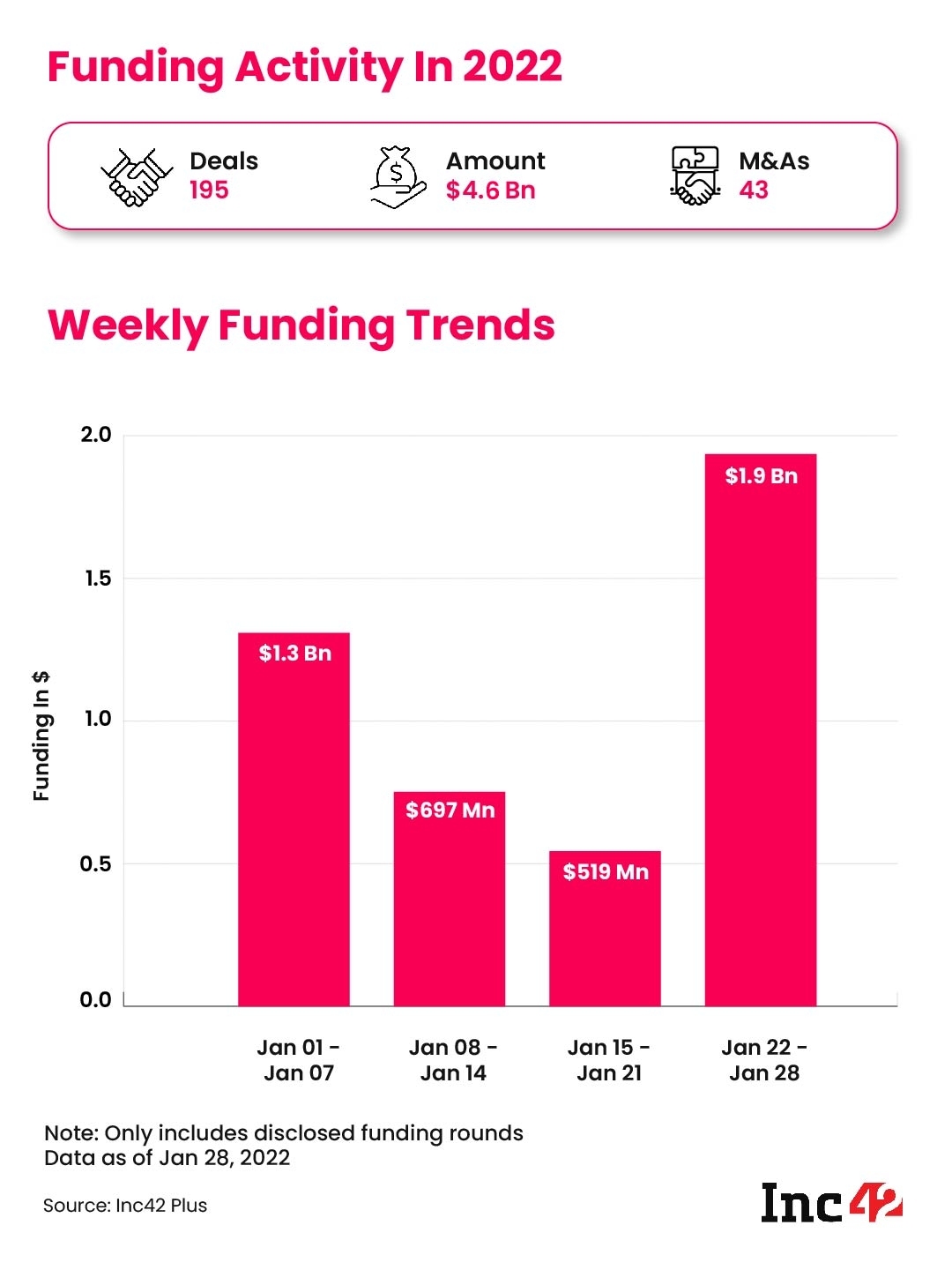 Here’s a look at the weekly performance of the listed tech companies: Ola and its founder Bhavish Aggarwal have already copped a lot of flak on social media for the delayed deliveries of the company’s first electric scooter, which is yet to reach all the pre-order customers. But nevertheless, Ola Electric has set its sights on the four-wheeler market. Aggarwal teased a concept design of the electric car on social media this week, which elicited a mixed bag of reactions. While many praised the company for its ambitions and trying to disrupt the automobile industry in India, others questioned the delay in deliveries already.

One of the critics was Autocar India editor Hormazd Sorabjee who has been covering the auto industry for over three decades. But Sorabjee’s questions on the credibility of the company’s claims was met with the response #petrolmedia by Aggarwal along with a gif of Burnol, a burn treatment ointment. Look, no one doubts that Ola Electric may change the Indian auto market, but mocking critical questions is certainly not a respectable way to answer them. Secondly, perhaps Aggarwal would like to explain how Ola’s mobility business could have grown all these years without the petrol-run cars in some states. Seems to be a case of double standards. 🤔

That’s all for this week! We’ll be back with our weekly wrap-up next Sunday!