India’s creator economy is open, diverse and vibrant as online platforms becoming the refuge away from home for many in the past 18 months.

Rarely has history presented an opportunity such as the one it’s doing right now. It’s happening as you read and as I write. We might have to go all the way back to the dawn of agriculture to say the same thing. Today, almost everyone on earth can be a creator. This is the time of the creator economy.

Let’s get one thing straight, we don’t mean everyone should quit their job and move to becoming a creator. No, what we are saying is everyone has the chance to be one, if they are so inclined and they can make a career out of it. And with the emergence of millions of creators in India, startups catering to the needs of creators are also becoming more common and solving real problems in a massive market.

That’s how open and democratic India’s creator ecosystem is today, with content consumption setting new records every year, social media usage rising unfettered and online platforms becoming the refuge away from home for many in the past 18 months.

Naturally, as more and more creators realise this, the potential size of the opportunity in the creator economy is becoming clearer — it’s as large as the population of the internet, generally speaking, but in India, the creator base is said to be between 80 Mn and 100 Mn, according to the social media platforms we spoke to.

It encompasses streamers on YouTube, Twitch and other video streaming platforms, the producers and creators on OTT platforms, influencers on Instagram, Snapchat and of course, today’s tastemakers on short video apps, as well as video producers, bloggers and anyone on social media monetising their content.

“The whole short video phenomenon is probably the most democratic way in which talent has ever surfaced in the history of humanity,” says Ankush Sachdeva, cofounder of ShareChat and short video app Moj.

Moj is one of more than half-a-dozen startups vying to become the default short video app of India. Ever since the vacuum left behind by TikTok’s unceremonious ejection from India, the short video space has been a massive battleground. It’s scarcely believable that apps that barely were spoken of a year ago, are now the de facto platforms for independent creators. Moj was launched in July 2020 and Sachdeva claims it has over 160 Mn users.

Josh, which is operated by ShareChat rival and unicorn Dailyhunt, claims to have over 110 Mn users, MX Takatak says it has 150 Mn+ monthly active users. All this within one year of launching. In comparison, it has taken YouTube over a decade to reach 425 Mn MAU in India.

Others in the short video space believe that the competition has tilted so much that YouTube is no longer the first video app for many new-to-internet users. They are using MX Takatak or Moj or Josh, or indeed Roposo or Chingari or Mitron. There are several options tailored for Indian tastes and with creators that connect best with these millions of new users. 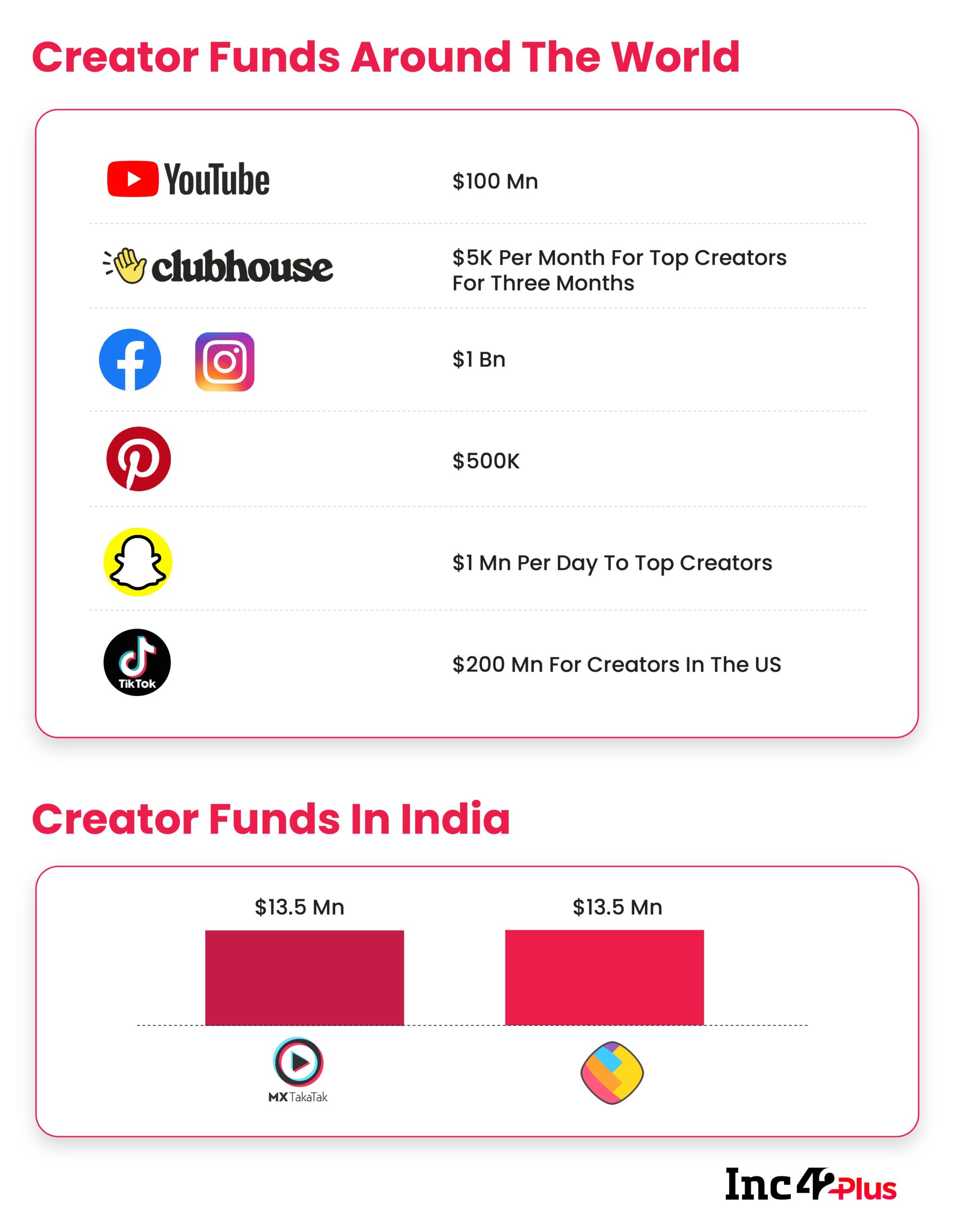 Social media unicorn ShareChat and other players like Times Internet-owned MX Takatak believe that this growth of homegrown platforms has certainly made it viable for creators to make a living out of it as a full-time job. The top creators on YouTube, Instagram and other social platforms in India make somewhere between INR 1.5 Lakh per month to even INR 10 Lakh – INR 15 Lakh per month up to as high as INR 2 Cr per month, as per a recent report.

YouTube said earlier this month that it saw creator revenue doubling in India between February and May 2020, particularly for paid messages in live streams, stickers, channel memberships, and merchandise. The company has launched a $100 Mn YouTube Shorts Fund to be distributed over 2021-2022 to short video creators globally.

But as a creator, your mileage may vary. MX Takatak business head Janhavi Parikh believes that those earning lakhs every month have built their audience over years — even before short videos were a thing in India. So it’s not overnight success or a get-rich-quick scheme that many think being an influencer or creator is.

Parikh added that through its INR 100 Cr fund, creators don’t just receive regular rewards for hitting targets and access to analytics, but those with story ideas that have a social impact will receive funds to build and grow the idea. So the quality of content is also being looked at, and not just the potential reach.

Sachdeva says 95% of creators don’t make any money; only a select few do but the rest are doing it out of passion and that can sometimes grow bigger than they realise. In a large market with tons of micro-influencers, even a small following can be meaningful commercially speaking. While there’s a lot of money being raised just to cater to creators, the idea is more than just paying creators a minimum income; it’s about helping a creator drive their work like a startup. These creators are tracked closely and have to deliver the results, or they may be replaced by other budding alternatives. The lack of an entry barrier means a creator will always have more and more competition.

Given the high competition, most creators want a platform that drives engagement, gives them the most number of views and likes and that’s where the recommendation and discovery engine of a platform as well as its creator-centric services and products will be the key differentiators.

Influencers put in hours of work for even a 10-second video that will be forgotten within the next day or two. It’s about maximising the engagement in that window and that’s never easy regardless of the creator’s following or income. Short video apps are stepping in with support and guidance to help creators of all sizes to grow bigger, and other innovative startups are looking to become enablers for creators through various models.

Short video platforms are pitching not only through analytics and data about engagement but also through hands-on work such as setting up studios for shoots, guiding them on lighting and other technical aspects, reviewing their output and providing feedback on what can be improved and more, says MX Takatak’s Parikh.

These are the retention levers being used by short video apps to hold on to creators, besides throwing money at them and helping them get the big brand endorsements that ensure higher overall income.

On the flip side, the increasing use of influencers and creators for online branded content has sometimes gone too far such as in the case of misleading health claims or even volatile investment opportunities such as crypto.

Popular comedians such as Tanmay Bhat and Rahul Subramanian, cricketers Ishant Sharma and Dinesh Karthik and actors such as Manoj Bajpayee, Radhika Madan, Kriti Kharbanda and Radhika Apte among others have done ads and posted content for leading Indian crypto exchanges such as CoinSwitch Kuber, Binance-owned WazirX and CoinDCX. Some of these promos are now under the scanner, due to the potential of misleading users as well as the fact that these influencers are not experts in the field. So even as most digital product and service categories leverage influencers, some are still not mature enough for creators in India.

Of course, brand engagement deals are the big paydays for creators and help them acquire a bigger audience. It cannot be ignored by any creator. Social platforms are enabling brands to find the right influencers for their campaign.

Those in the influencer marketing sector believe that direct-to-consumer (D2C) brands would not have seen the same growth in the Indian market without the backing of social media influencers. The whole model is based on influencing sales across platforms. It’s hard to see how any D2C brand such as SUGAR would have grown to INR 100 Cr in sales without banking on the creator ecosystem.

One of the keys to the cosmetics brand’s success has been its use of influencer marketing and social media hype generation. It boasts more than 1.5 Mn followers on Instagram, 300 Mn impressions across all social media channels. It’s not just about endorsements or posting content — for the more popular creators, D2C brands are paying out commissions for sales coming through their channels. This secondary revenue stream increases the possibilities of how creators can work with brands.

While D2C brands are reaping the rewards of the digital reach of these influencers to drive their business, bigger retail brands and traditional businesses are taking a page out of their book.

According to Pranav Panpalia, who went from being a YouTube influencer to founder of influencer marketing agency OpraahFx, bigger brands are now realising that social media cannot be ignored and this requires a 360-degree strategy too, not just Facebook ads. Influencers have become the leverage needed to access the deep niches of the Indian market that are hard to reach with Facebook or YouTube targeting.

Short video is going beyond these big tech giants and creating deeper engagement due to the use of native languages by creators, says Ramya Ramchandran, founder of Mumbai-based influencer marketing agency Whoppl. Even so, there’s a big gulf between what creators in smaller towns earn with their regional language content, versus what bigger creators make in Mumbai, Delhi, Bengaluru and other bigger cities.

Many believe this gap is slowly being closed. Panpalia has no doubt that creators in Tier 2/3/4 towns can earn as much as their counterparts in Tier 1 cities and metros. They have to find the right engagement triggers and this is where the talent of the creator will lead the way and bring them the opportunity to earn from brands

But others such as ‘TTT’ creator Anuj Gosalia believe that creators need to become more self-reliant to hit the big leagues and look beyond brands. More and more creators are learning that having the freedom and autonomy to create content that they want is more important than signing inflexible brand deals or exclusivity deals with social platforms. 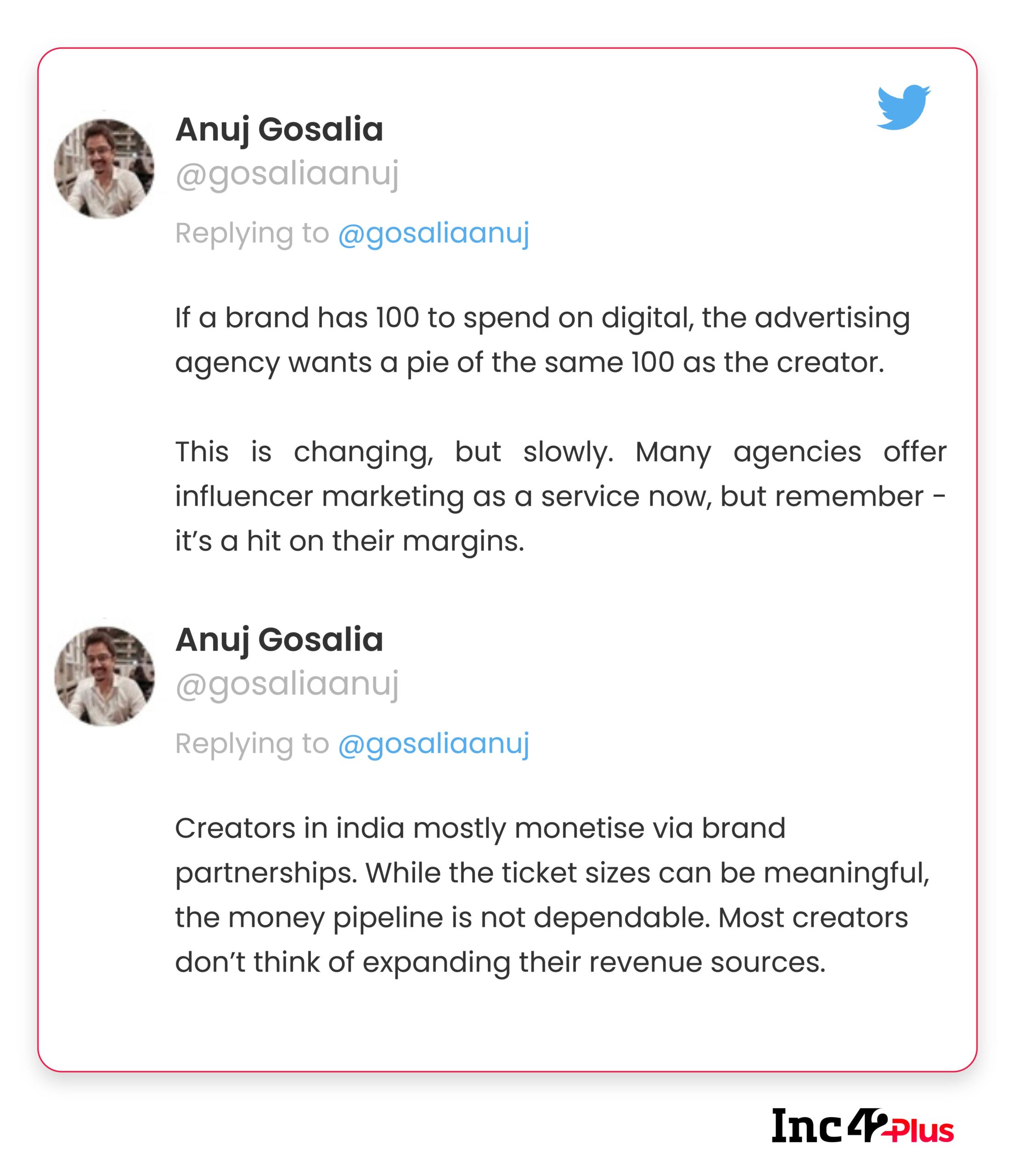 But several creators have themselves become investors too. Creators such as comedian Tanmay Bhat and fitness pro Ranveer Allahabadia turned investors by backing startups that are enabling creators to build successful careers. The duo invested in QooHoo, which allows creators to manage their online communities and presence.

The success of big-name creators has made other budding creators realise that they have to take charge of everything that goes on behind the scenes — from production to finances and more. It’s akin to running a startup with the creator as the founder, CEO and the face of the company. Dedicated tools such as CreatorStack, QooHoo, Cre Club, Nocolo.co, CreatorOS are enabling creators to become more independent and become more self-reliant.

CreatorStack, which enables digital creators to create content, engage with fans, brands, and investors; and improve monetisation, recently raised funds from Accel in its seed round, and is betting that creators want a Shopify-like experience when it comes to managing their day-to-day activities to maximise monetisation.

The thesis behind CreatorStack and other creator-focussed SaaS and enablement software is that sustained capital inflow will always be restricted to the best of the best creators — those with millions in followership already.

Technology can step in to grow the influence of smaller creators and get them the optimal income. While the pressure to create great content will not go away, perhaps the next generation of micro-influencers can compete on an equal footing.

Till our next creation,
Nikhil Subramaniam