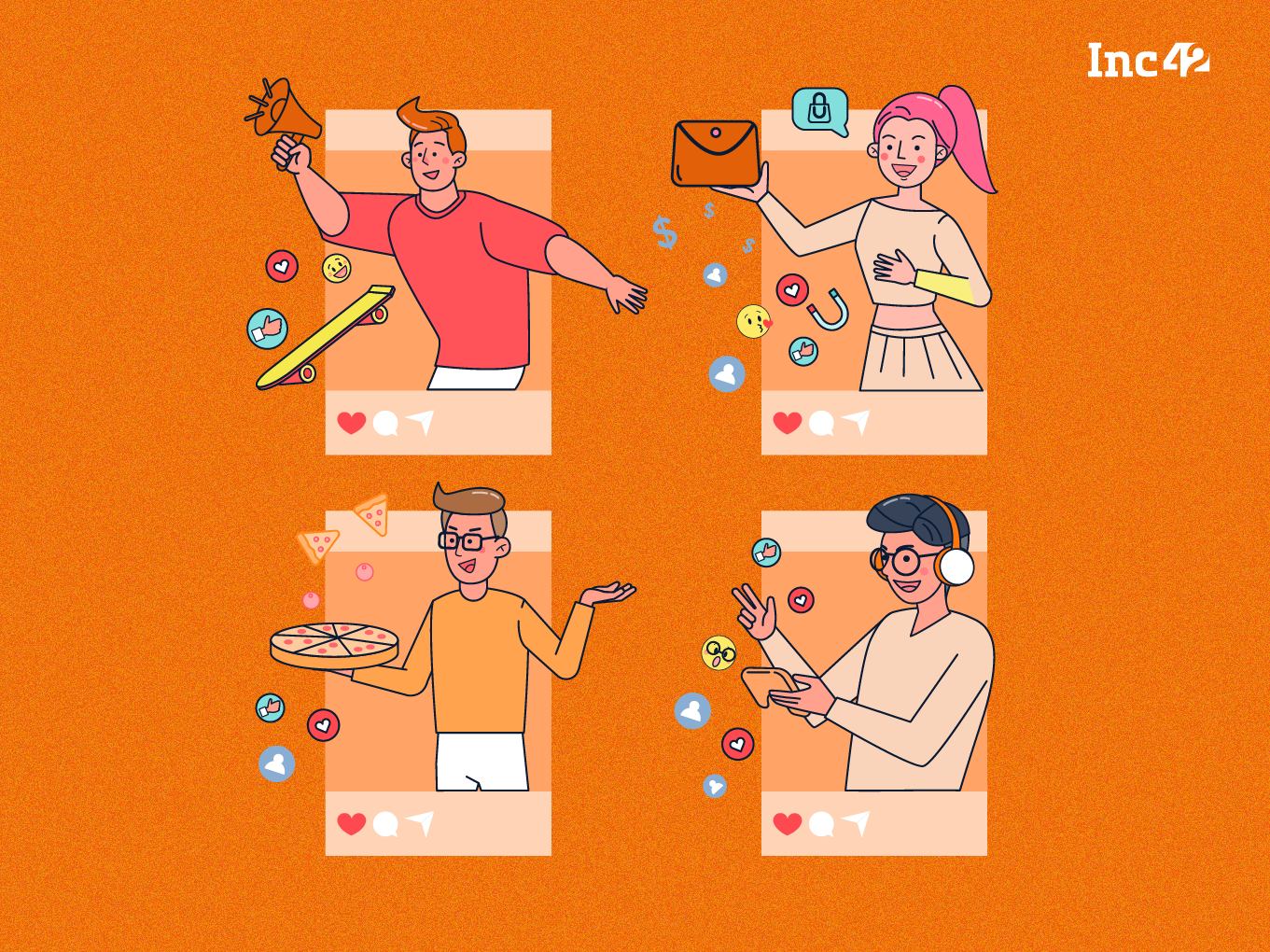 Creators and social media influencers are now big D2C brands. Instagram and YouTube followers and subscribers have turned into customers.

In fact, the rise of D2C as a model has clearly inspired creators, influencers and experts with big social media followings to create products, merchandise, private labels and more. We’ll dive into how more than two dozen such brands have been making waves on social media, but here’s a small detour to a couple of other stories.

Creator-led brands are nothing new of course. While earlier big name celebrities jumped at the chance to create private labels, these days the influencer is king.

Social media influencers and creators drive most of the conversation online these days and it’s led to them becoming powerful brands in of themselves. This is seen in over two dozen brands that we came across in a week’s scouring. There must be plenty more that didn’t fall into our net, but the point is that Indian consumers are more than happy buying things created by creators.

There’s a wide range of creators and influencers selling through their native D2C stores or indeed on social media apps like Instagram. And it’s not about having millions of followers, but rather about having a significant base of highly-engaged and quality users. 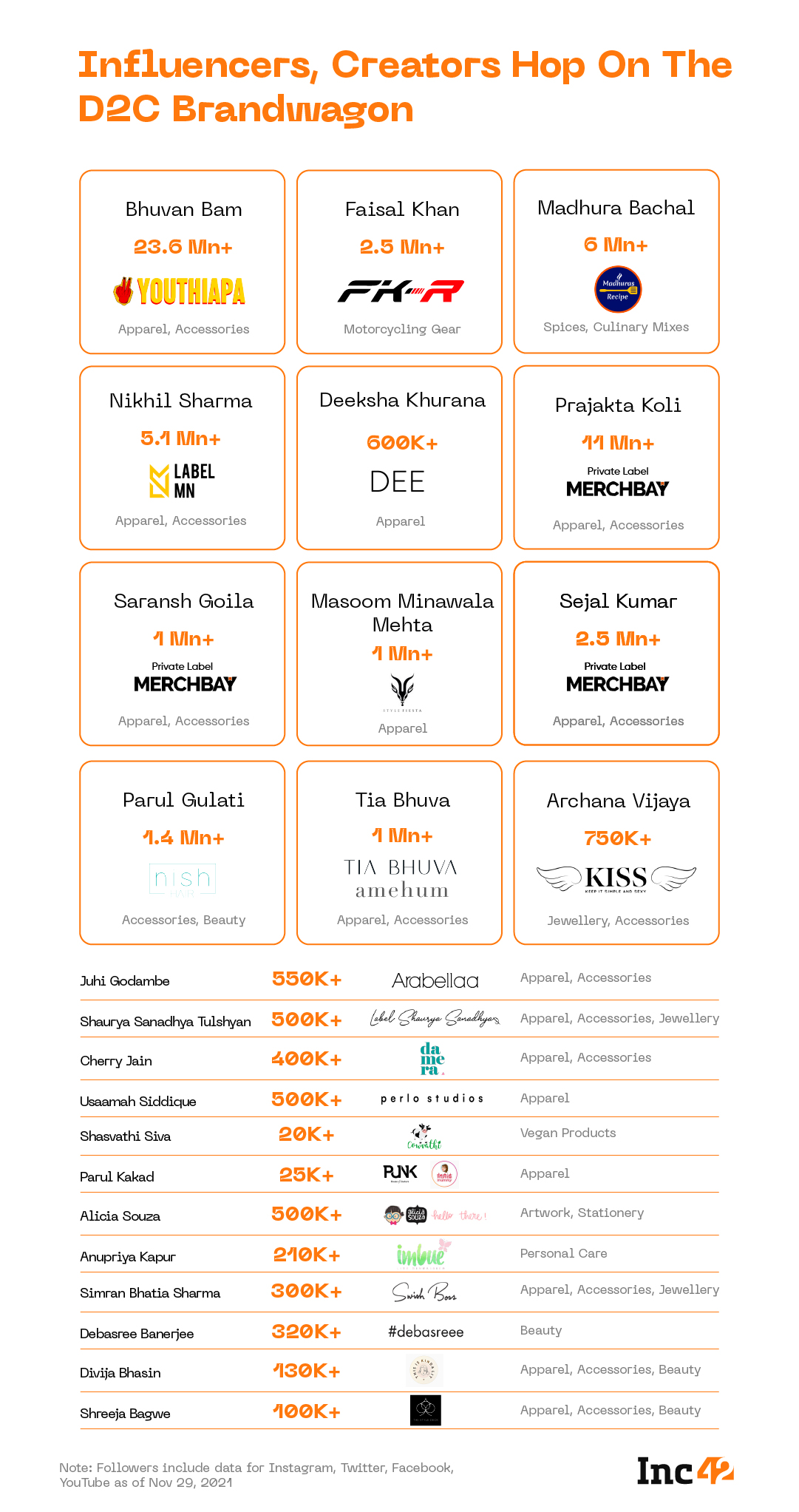 🧫The Need To Evolve: Comedian Bhuvan Bam, the wildly popular creator behind BB Ki Vines, has over 30 Mn followers, and began his D2C journey way back in 2017 with Youthiapa. Cofounder Arvin Bhandari, who is Bam’s childhood friend, told us that the biggest challenge for creator-led brands is the need to evolve, to keep up with not just the maturing audience, but also the creator themselves.

Youthiapa began as a merchandise-based store with products revolving around the comedian’s popular lines, but has now transitioned into everyday fashion as Bam himself matured.

The customers that have stuck around since 2017 also want to buy new things. You cannot remain stagnant or keep things the same for too long.

🤔The Audience Dilemma: For Bam and other young creators, the primary audience is Generation Z consumers who are super engaged, but do not always have the financial freedom to pay for products themselves. This is especially true in Tier 2/3 cities and smaller towns, where most social media fan following for creators comes from.

This means that products have to appeal to not just the primary consumer, but also pass muster with parents and guardians. It’s a finer balance than one realises considering that often social media content is often explicit in nature, and that cannot always be brought into the real world. 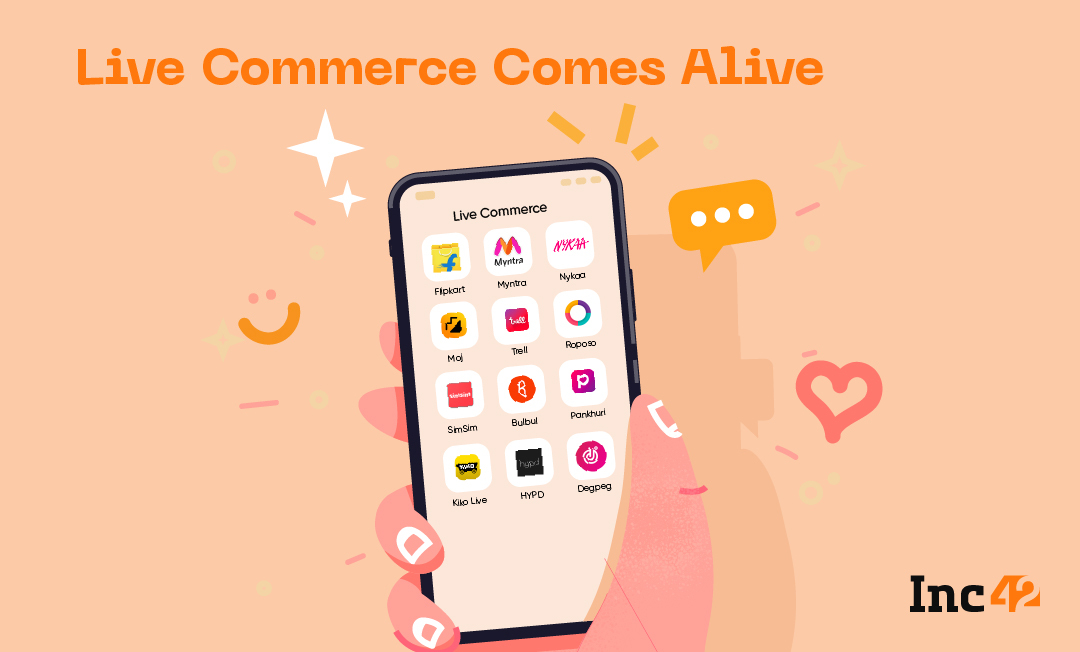 🤳New Stages For Creators: India’s live commerce space is booming and fast becoming a battleground for social media unicorns, ecommerce giants and upstarts, with the entry of Flipkart, Myntra and other bigwigs.

Creators and influencers associated with D2C brands are now spoilt for choice when it comes to platforms to reach new audiences and experimenting with formats. They just have to pick and choose.

The D2C Summit is back this week and we are excited to bring together the who’s who of the ecommerce world. Join us this Friday, December 3, 2021 for the fireside chat — Decoding The ‘Real’ Thrasio — with Carlos Cashman, cofounder and CEO of Thrasio to see how the ecommerce juggernaut was built in just three years and the model that has spawned scores of clones! 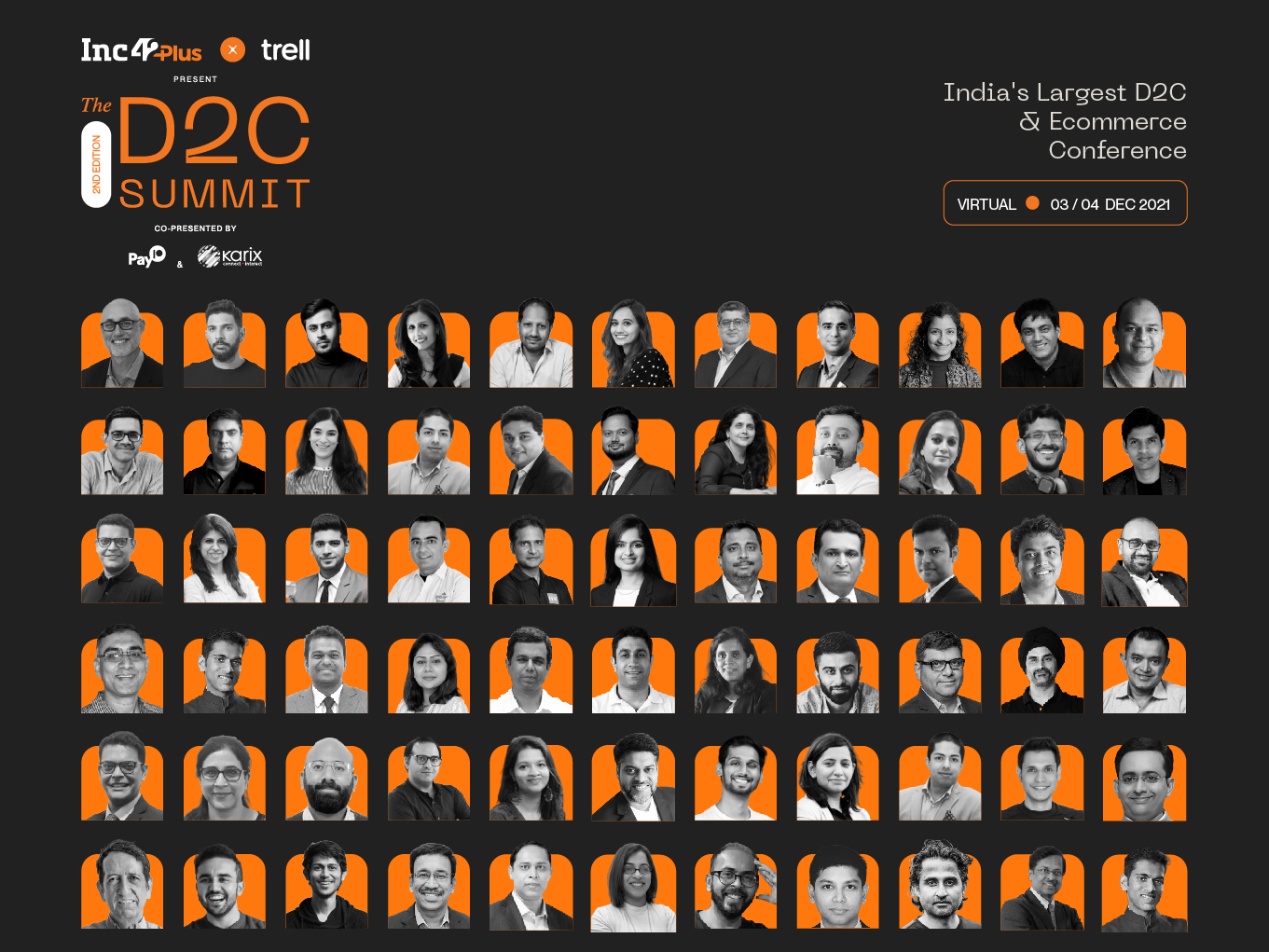 Have you ever thought about what astronauts eat when on space missions? One cannot imagine it would be too good, given that packaged food is mostly all they can get. But in 2020 NASA came up with lyophilization technology which is said to be the best way to preserve nutritional value of ingredients and the taste and texture of food, even when it has been packaged.

Gurugram-based Yu Foodlabs is bringing lyophilization technology for ready-to-cook oats and pasta bowls that only require hot water. Yu Foodlabs claims that the tech not only improves the nutritional quality of packaged food, but allows the use of all-natural ingredients since the process does not need preservatives. 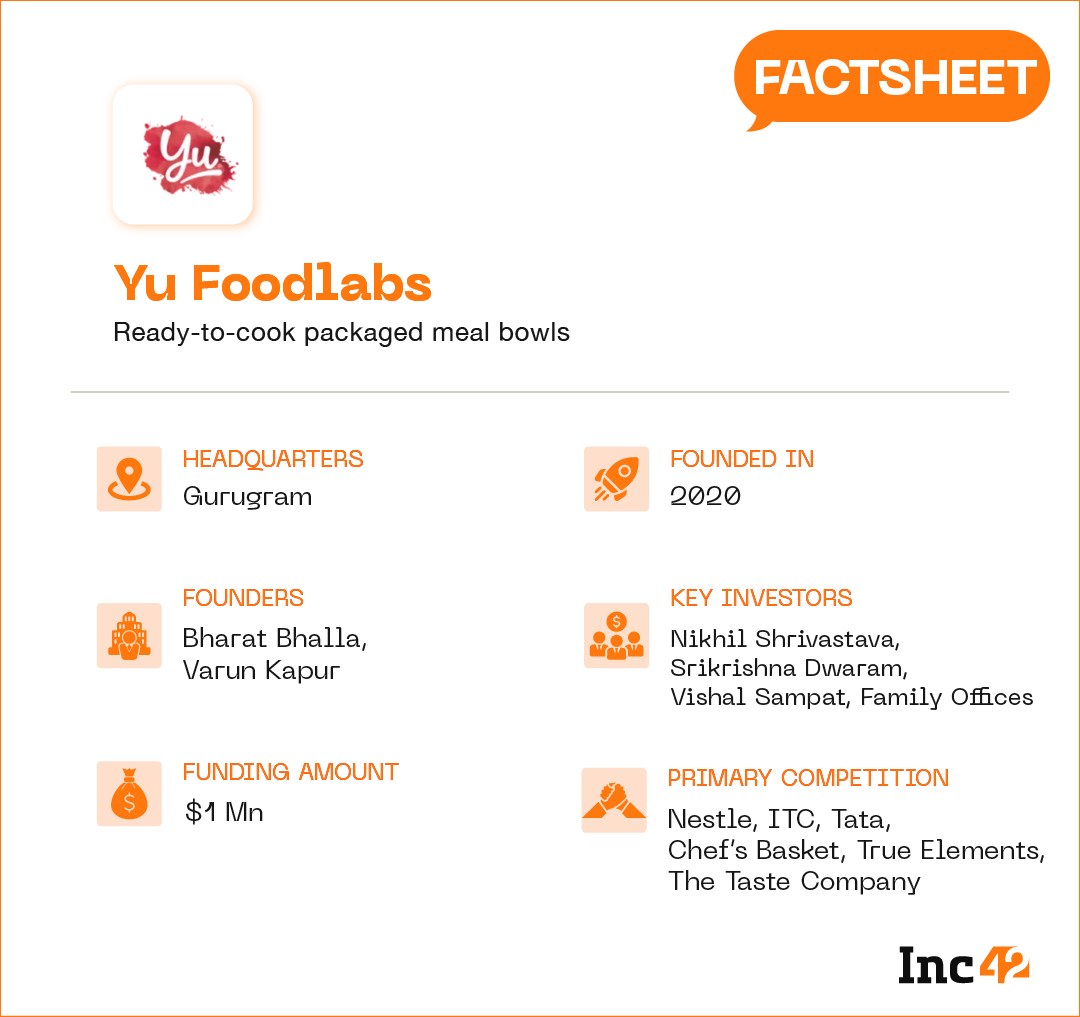 💡The idea: The founders wanted to bring something that is healthy and nutritious to the packaged food segment, but realised that existing processes limited them. That’s when they stumbled upon the lyophilization tech that NASA was testing for space food.

Yu Foodlabs launched its products in stores in October 2021, but has been in research mode for the past 18-20 months, cofounder Bhalla told us. Figuring out the right ingredients, quantities and recipes took time as lyophilization was completely new for food scientists and chefs too.

🏗️The model: Cofounder Kapur said that the startup will continue to take an omnichannel path when it comes to sales as that’s what the packaged food category demands. One has to be present in multiple stores and create potential sample points in as many locations as possible.

Besides general stores and supermarkets in Delhi-NCR, Yu’s products will be available in Mumbai starting next week. It also sells through ecommerce and food delivery platforms. The company claims it will have sold 100K units across its six SKUs by the end of its first quarter of operations in December.

⛳The roadmap: While the company has launched with oats and pasta, there were more than 40 SKUs being tested before launch, according to the founders. That indicates that the lyophilization technology is scalable to other food items and cuisines.

Next on the pipeline is halwa products, which would fit into the dessert category. The vision is to have a product for each meal time — oats for breakfast, pasta for lunch/dinner and halwa for dessert.

Till next week! But see you at The D2C Summit before that.