Founder Vaibhav Sisinty said the vision is to connect learners with mentors, professionals and influencers that have already become leaders in their particular domain

After two years of being bootstrapped and in stealth mode, the startup has raised its seed round from Sequoia Capital, Owl Ventures and angel investors

The edtech startup has more than 2 Lakh users since its launch in October 2020 and the company has been profitable since the early days, the founder claimed

India’s edtech story is a tale of two sides. On one end are the likes of BYJU’S, Unacademy, upGrad that are eating up competition and emerging players on the back of their funding muscle. On the other side are early-stage startups that are capitalising on the online learning boom and carving out new models. But at the same time, the sector is dominated by test prep and K-12 startups.

The total funding for edtech startups touched $4.7 Bn in 2021, with the test preparation sub-sector walking away with almost 65% of funds ($3.06 Bn) that came in. So it’s easy to believe that edtech is all about test prep, but increasingly skill development and employability have also become key focus areas among investors because of the need of the market.

The problem is that Indian students are not ready for jobs even after years of the education system. Startups such as upGrad-owned KnowledgeHut, byteXL, Growth School, AntWak, GetSetUp, NxtWave among others are looking to solve the employability gap because of some of the most intrinsic drawbacks in the Indian education system today.

“Curriculum in Indian colleges is bloated and outdated, and on top of this, the professors and teachers are not actually practitioners. How can you expect them to teach you what has been used in the market today?” questions Vaibhav Sisinty, founder of skill development startup Growth School.

The core idea behind Growth School is that while young professionals or graduates may possess some technical knowledge about their fields, the need to upskill is ever-present. Sisinty said the vision is to help students and learners learn from mentors, professionals and influencers that have already become leaders in their particular domain. LinkedIn, which launched its ‘Career Explorer’ tool amid the pandemic in October 2020, claimed that competition among professionals for jobs is at least 30% higher than before the pandemic, with reskilling and upskilling demand rising.

At the same time, the Bengaluru-headquartered startup is also catering to the subset of more casual learners who want to explore new topics or areas that are buzzing right now. This is more of an interest-driven endeavour, rather than getting set for a career, the cofounder claimed. Growth School’s programs range from courses on UI, UX, digital and social media marketing, freelance businesses, NFTs, crypto investments, D2C businesses and more. 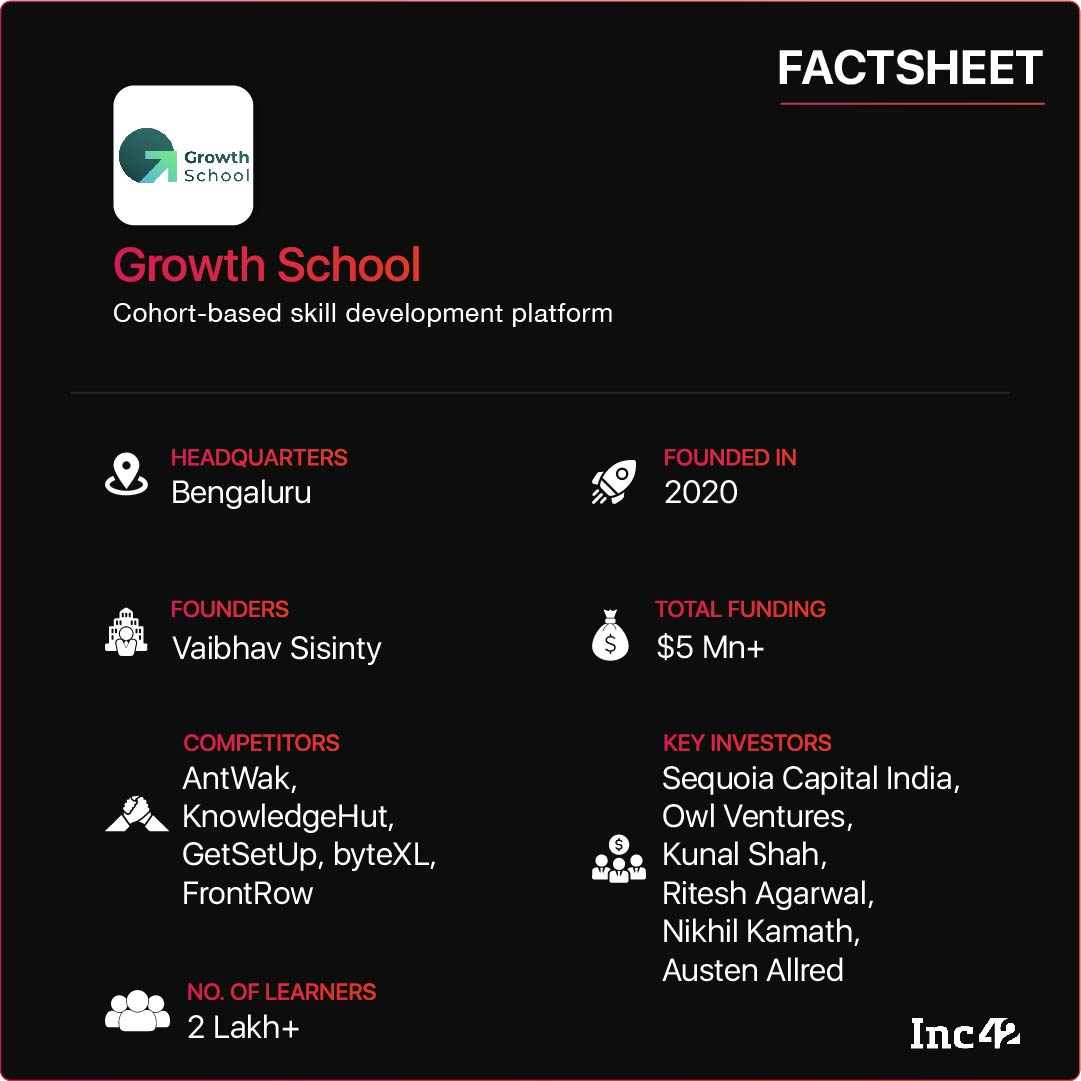 The course content of Growth School’s community-led cohort programs typically consists of real, actional and practical information that can be applied in the real world. With programs of duration four, eight and 12 weeks, the idea is to allow job seekers access to flexible learning. Besides having mentor-partners as teachers, the community-led model means learners themselves are involved in submitting feedback on each other’s assignments, mimicking a college dorm-like peer review.

It claims to have close to 2 Lakh users accessing its programs, with 10%-15% of the user base being free users. Sisinty did not disclose the revenue figures for the 15-month-old startup, but claimed that the unit economics has been solid since day one and also said Growth School is profitable currently. So why the fundraise now after two years of being bootstrapped?

While working with Uber and travel tech company Klook in Mexico City, India and Singapore between 2014 and 2020, Sisinty had racked up quite a following already. He had started by offering mini courses on growth hacking and marketing on Instagram and LinkedIn during his spare time, which had already brought in thousands of dollars in revenue.

In July 2020, he revisited the LinkedIn workshops idea amid the lockdown across India. In September that year, he quit his job at Klook and took the plunge. “Obviously, we didn’t have the money to do anything. I got some friends from Amazon to launch courses on UI and no code. That’s how we started.”

The goal in the early days was to see how feasible the idea is, whether it will work at scale. “We went in without any thoughts on branding or logo. We wanted to only solve for product-market fit in those days.”

The initial ‘product’ was a barebones effort put together using YouTube APIs, Webflow, WordPress, Zapier and Bubble. Without writing a single line of code, the startup had an MVP ready to take to the market. Between September and December, Growth School had ten more programs ready for learners.

“We did not have a logo, website, or even social media presence, but we managed to get some very credible people on board as mentors. We got people from Google, influencers such as Raj Shamani, design leaders like Saptarshi (Prakash) from Swiggy and others like them because we could sell them the big story,” Growth School founder Sisinty told Inc42.

The mentors not only partnered with the startup, but 80% of these mentors have invested in Growth School, with many investing for the first time in their lives.

Sisinty said the first set of users came from his own network built over the course of six years as a marketing man for Uber and other brands in the tech industry. To start off, he put in his savings and also borrowed from family to raise INR 1 Cr. The initial team consisted of Sisinty and one person in charge of customer support and one in charge of operations, and a couple of interns.

He also believed that while he could have raised money for the startup even in those early days, the idea was to remain in experimentation mode, which is not always possible with investors on board. Plus, he wanted to be in stealth mode and under the radar because of the fear of failure too.

Being in bootstrap mode and his past experience with Uber has shaped Sisinty’s thinking. He remains very cognizant of the fact that the fund raise is not about achieving “steroid growth” or spending “10 rupees to make one rupee”. He said he has always had a marketing budget of millions in the past, but that also meant burning that cash to achieve growth.

Even before finishing its first year of operations, Growth School had achieved its first million dollars in revenue. Given the small team size and the no code operations, the business was “very profitable” from the get-go, the founder claimed. However, we were not given specifics about the revenue or profitability for the current financial year.

The biggest reason for raising the funding today, the cofounder told us, is that Growth School is now looking to build its product and scale up. “We didn’t have a product so far. Everything was down top of low code / no-code. So the fundraise means building the product, team and our own tech stack. The other major reason is to test international waters.”

These are the topics that are best suited for the company from a unit economics point of view, the founder said, because it attracts both job seekers as well as business owners or founders. The current focus areas are entrepreneurship, angel investing and going deeper into D2C, which opens up several possibilities in terms of program development.

As for his biggest learnings from being in bootstrap mode, Sisinty said that if he does it all over again, he might have spent a little bit more money on hiring than he did at the beginning. He claimed Growth School was a bit too conservative in the first year and argues that the startup could have got this growth faster if not for his “over optimisation”.

Correction note (January 28 | 13:30)
The Growth School factsheet erroneously mentioned its HQ as Mumbai, and Nithin Kamath as an investor. Both these errors have been rectified.