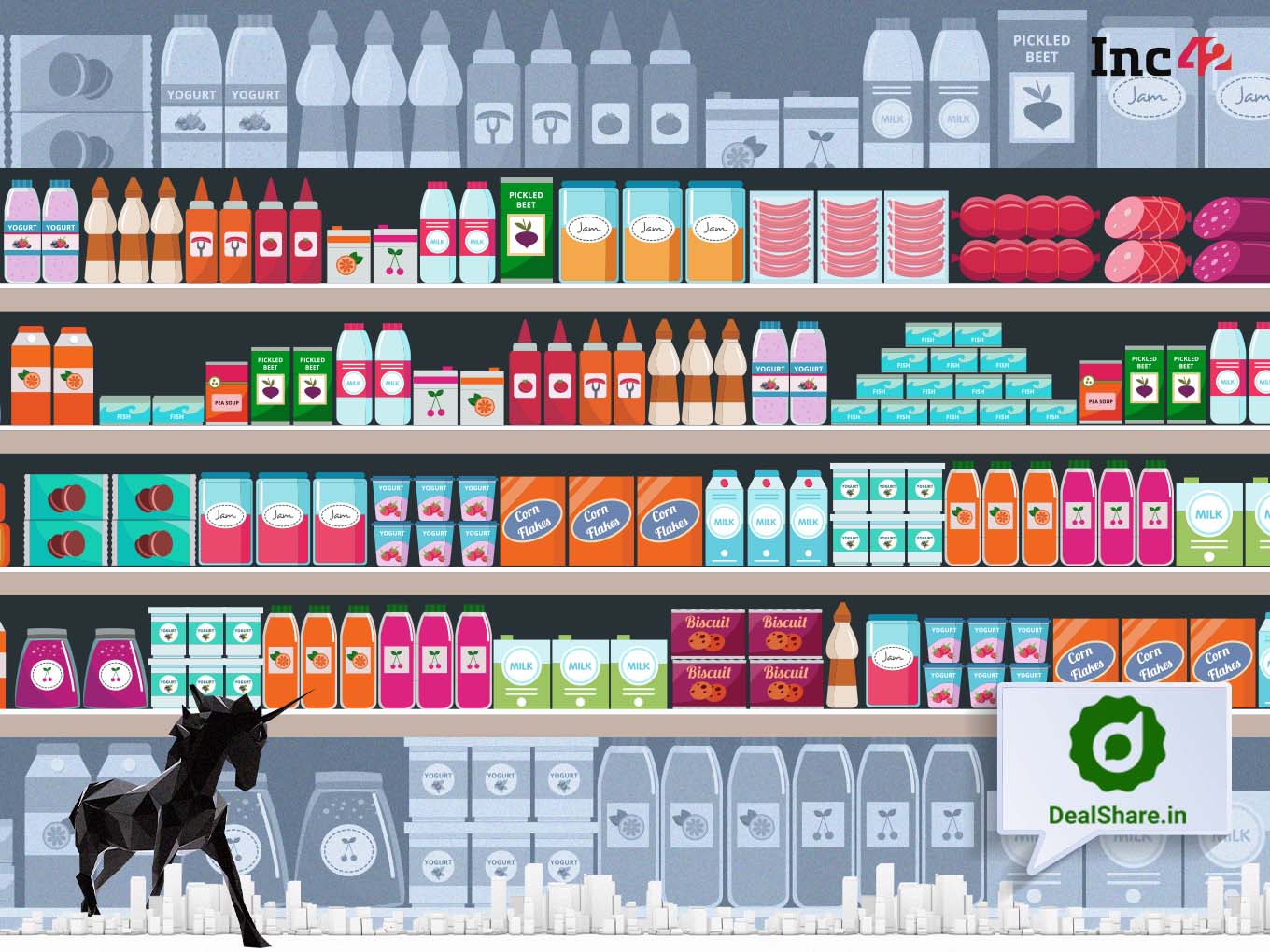 Dealshare has officially announced its $165 Mn Series E round adding Dragoneer Investments Group and Unilever Ventures to the previously mentioned pool of investors. The startup in its press statement said it will utilise the fresh capital to invest in technology and data science, as well as a ten-fold expansion in its logistics infrastructure and to increase geographic reach. In addition, it will establish a sizable offline store franchise network.

The round takes the company’s total valuation to $1.62 Bn according to Inc42 estimates, making DealShare the latest entrant in the unicorn club. The startup’s valuation has more than tripled since its last fundraise in July 2021.

With the current round, DealShare has raised around $330 Mn to date, joining the league of startups turning unicorns in 2022 alongside SaaS Startup Fractal AI, edtech LEAD and HR Tech startup DarwinBox.

The startup sells grocery and household essential products through social media and messenger platforms like WhatsApp. It uses two ways to bring down the cost of essential products for the mass market segment — directly sourcing household items of lesser-known brands and selling products via community sales.

In 2021, the startup had a network of over 50,000 influencers to make deals viral and offer consumers incentives to share product deals with their friends. Rao, in a statement, had previously also claimed that the company’s gross revenue increased by 10X over last year with an ARR of $750 Mn for FY22.

“In 2021, we were able to pull over 5 Mn customers from the real Bharat into the fold of online shopping, particularly for groceries and essentials,” he had stated.

The startup had previously also mentioned that it was expanding operations from the current 10 states and 70+ cities to 20 states and 300+ cities by December 2022, adding 50 Mn new customers. It eyes an ARR of $3 Bn in FY23, essentially becoming operationally profitable.

“To support growth, the company plans to invest in expanding its operational capacity, technology and human capital. We are looking to add more than 10,000 people across functions like technology, sourcing and merchandising, sales and distribution, marketing and operations, finance and HR in 2022,” Rao stated.

DealShare competes with the likes of social commerce unicorn Meesho, BulBul, YouTube’s SimSim, GlowRoad among several others. Walmart-owned ecommerce major Flipkart forayed into the social commerce space with Shopsy in July 2021. Recently, Shopsy has entered into the grocery segment.

In December 2021, social commerce startup Stage3 raised a Pre-Series A funding round to improve technology infrastructure. Later that month, Gobillion raised a seed funding of $2.9 Mn to expand its business and launch into more categories.

Speaking at the 2nd edition of The D2C Summit hosted by Inc42, Bimal Kartheek Rebba, cofounder and COO of Trell, had stated that 7% of the entire ecommerce GMV comes from social commerce platforms, and by 2025, it will reach 15-20%.

(With Inputs From Debarghya Sil)