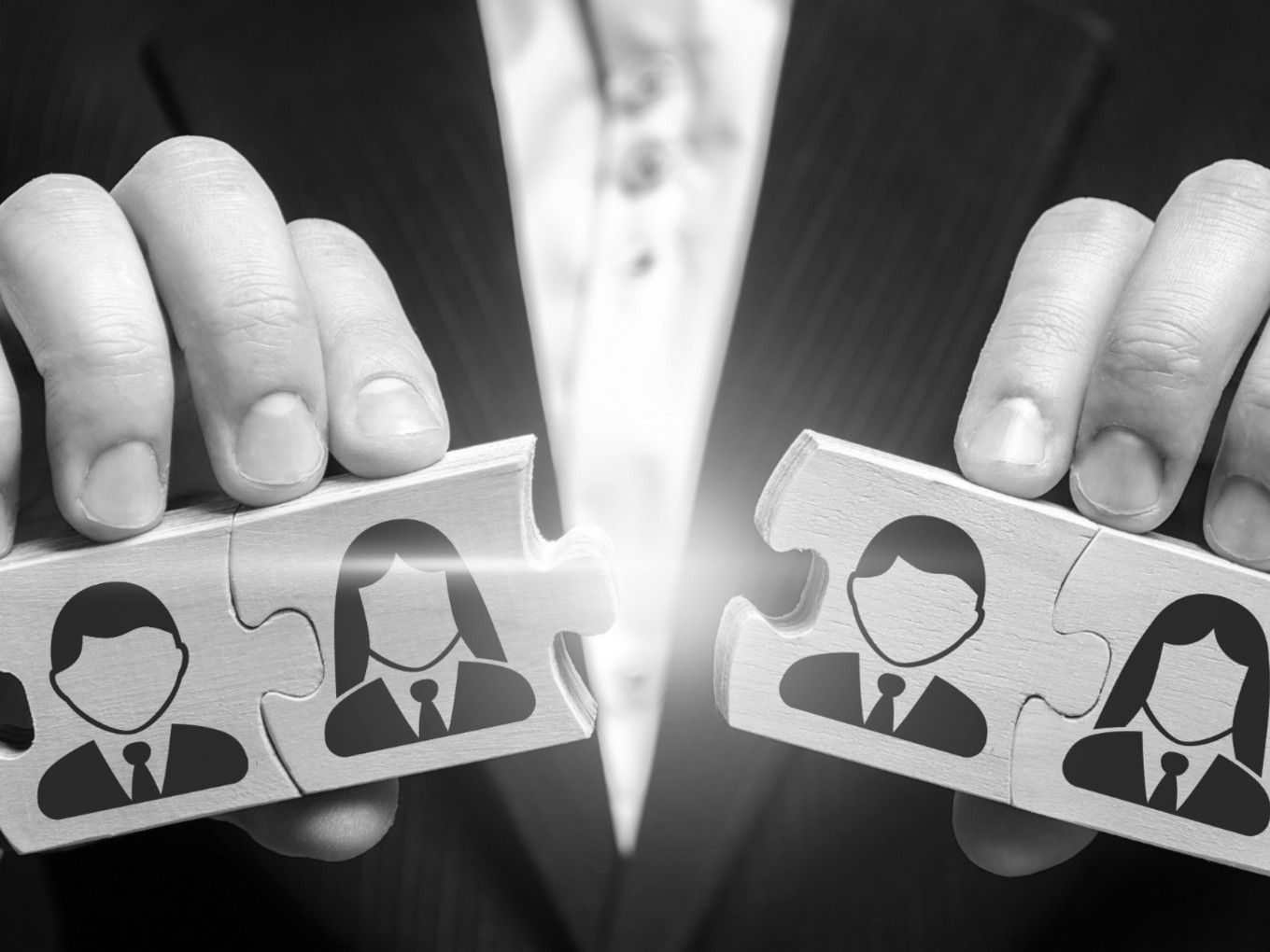 Founders and CEOs are foregoing salaries to help cut costs

The lockdown has officially been extended in several states and India is waiting for Prime Minister Narendra Modi’s address to the nation. However, even after 18 days of the lockdown, Indian startups have been on their own to fight the adversity as a financial relief package is still missing.

So even as they await such a package, startups are busy cutting costs to stretch their runway for the next 6-18 months, depending on their industry. As a result, several startup employees have been rendered jobless, while others have been asked to go on temporary leave or furloughs as businesses try to make up for the revenue shortfall. Everyone is doing what they can to overcome the crisis — businesses have extended insurance benefits for employees, founders and CEOs are foregoing salaries and the employees are working harder than ever in the fears of job loss.

At the same time, businesses have introduced voluntary resignations, others have supported company-wide pay cuts to ensure no layoffs are done.

And India isn’t the only one. The data collated by Layoffs.fyi shows that over 220 startups across the world have laid off around 19,550 employees since March 11. Further, there are 77 more businesses which haven’t been verified for layoffs.

In India, we have multiple such trackers going on— Big.Jobs, Skillr, Springworks— and collective data shows that over 60 startups have laid-off employees. Inc42 reached out to them to verify the authenticity of claims. As a result, a few of them have confirmed the job cuts and pay cuts, while others haven’t responded.

From what we have seen, overall, at least ten startups have confirmed laying off employees. 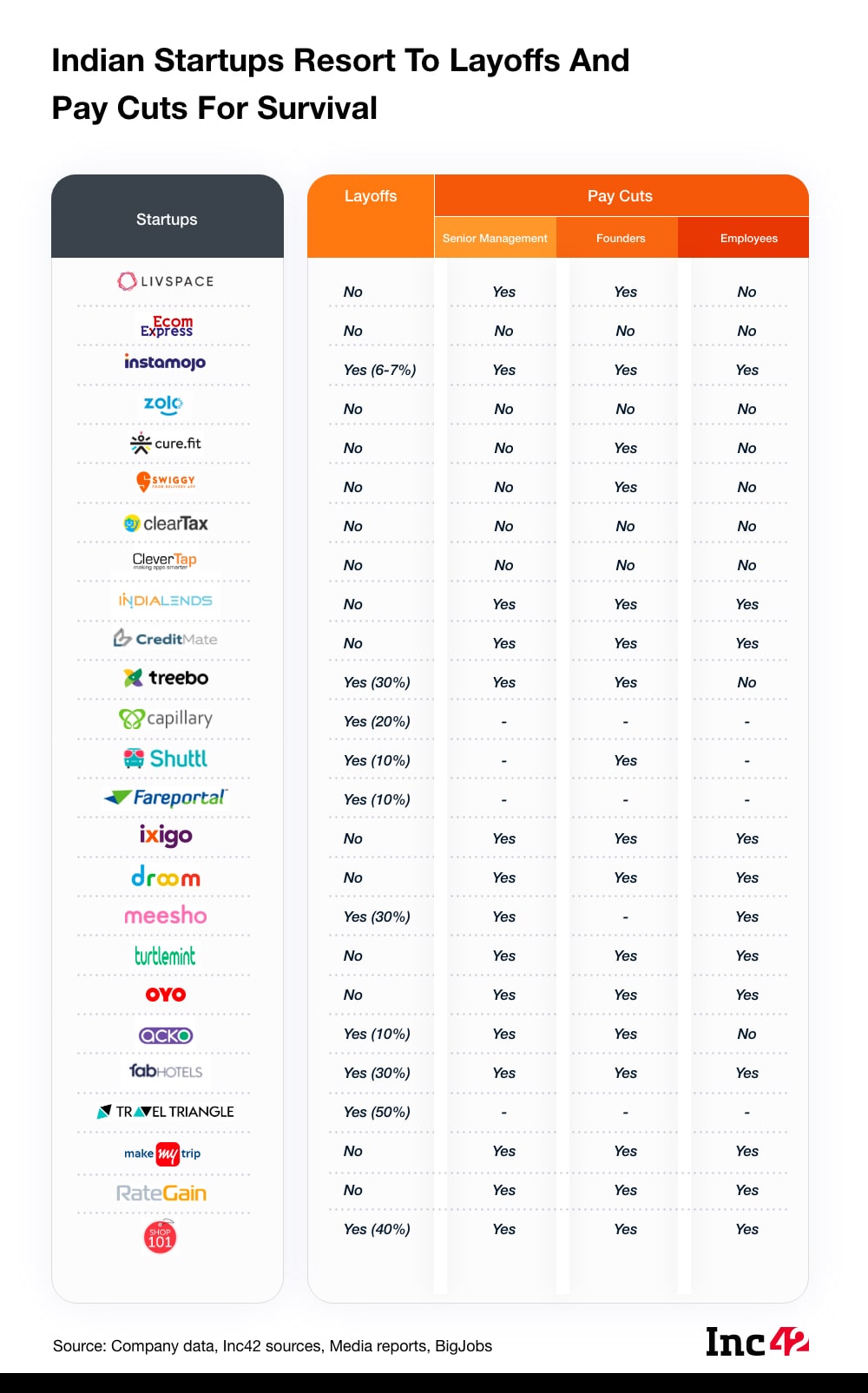 Clearly, due to restrictions on travel, one of the most-impacted sectors has been the travel industry. Even from early days, travel businesses were severely affected. As the situation has now turned dire with no travel allowed, across the globe, most travel and hospitality startups have been hit badly.

MakeMyTrip began by reducing costs on the employees front and to set an example both founder Deep Kalra and group CEO Rajesh Magow have pledged to not take a salary effective April 2020.

Rest of the leadership team at MMT have also offered to take approximately 50% in their compensation. “All of the above makes us confident that we would together be able to weather this storm and come out stronger,” the company’s top executives said.

At another OTA ixigo, founders have foregone their salary while employees have taken salary cuts to help the company manage runway till conditions improve in the travel industry.

As for Cleartrip, it was one of the companies mentioned in the industry tracker for job cuts, but we could not get a clear response from the company on the layoffs. A Cleartrip spokesperson told Inc42, “We are responding to this difficult period by taking measures to reduce all costs including salary costs while preserving as many jobs as we can.”

Further, along with travel, even hospitality businesses have been severely affected. For instance, OYO has asked thousands of employees to go on leave or furloughs for a period of up to three months as the company plans to dodge coronavirus’ impact on the revenue and occupancy of its hotel rooms.

The company said that since the outbreak, OYO’s occupancy rate and revenues have dropped by more than 50 to 60% and the company’s balance sheet has come under severe stress. Further, founder and group CEO Ritesh Agarwal has foregone his salary for the year.

The company’s executive leadership team has taken a voluntary pay cut starting at 25%, with many opting for an additional uncapped amount, and some going up to 50% to enable building the runway for the company. This would be effective from April 2020.

Further, another hospitality player, Treebo Hotels, offered its 400 employees to take up voluntary resignation. Treebo CEO Sidharth Gupta told us that nearly 120 employees have taken up the scheme. Gupta added that the founders are taking a 60% salary cut and senior management is taking 40% salary cuts for at least three months.

Another player, ZoloStays denied any layoffs or salary cuts for the employees at present. The company said it has implemented new policies to ensure the safety and security of employees and residents in all their properties across the 10 cities.

Further, employees of Shuttl also told us that the company has laid off employees across teams, one of the being on-ground operations team. The company had directed employees to resign, and those who didn’t have been terminated. Shuttl has claimed that it has laid off 40 employees.

The troubles for the fintech industry began with the order of Reserve Bank of India. “All commercial, regional, rural, NBFCs and small finance banks are being permitted to allow a three-month moratorium on payment of instalments in respect of all term loan EMIs outstanding on March 31,” the RBI statement read.

As a result, lending companies won’t able to get monthly payments. Inc42 earlier reported that IndiaLends has asked some employees to opt for leave without pay and others to take steep pay cuts as it looks to navigate the current economic crisis caused by the pandemic and the lockdown.

The founders had said that due to the pandemic, almost all of its lending partners have slowed down their lending activities and hence, it has directly impacted the business and revenue is almost nil.

Similarly, CreditMate cofounder and CEO Jonathan Bill said that the company has reduced salaries across the board to save costs.  Bill said that considering RBI moratorium on loans/EMIs, the company expects its revenue to reduce in the next few months.

CreditMate has a total of 60 employees and is cutting its salary bill by up to 20%. Cofounder Bill said a 25% is mandatory for employees earning above INR 1 Lakh per month, with those employees not willing to take the pay cut asked to leave.

Further, talking to Inc42, Sampad Swain, cofounder and CEO, Instamojo said that the company has downsized 6-7% of its total 100 employees. “Pay cuts were implemented because the business was impacted due to COVID-19,” he added.

Instamojo has implemented 10-40% company-wide pay cuts, of which the top management has taken the highest— 40%. However, Swain says that a third of the company has not been considered for the pay cut and remain unaffected.

Further, one of the mentions in data trackers was Cleartax, which told us that there have been no layoffs or salary cuts at the company.

Inc42 learned that B2B SaaS platform RateGain has sent hundreds of employees on temporary leave while several others have been asked to take pay cuts. The company said it has implemented salary reduction with the management team taking the greatest hit between 50%-100%. Further, the company says it sent some of its employees on furlough with an action plan to bring them back as soon as possible.

It has been widely discussed that companies could cut variable costs primarily while re-examining fixed costs till circumstances improve. Among the many companies said to have laid off employees, there have been only a handful of confirmations as many companies are still weighing options.

CleverTap denied any layoffs, while cofounder and CEO Sunil Thomas has said that the company is extremely fortunate to “have the resources we need, incredibly smart people, and a plan of action to assist both ourselves and our customers during this time.”

Further, TA Krishnan, CEO and cofounder, Ecom Express Private Limited also denied any layoffs. “The lockdown and related restrictions have adversely impacted volumes however, we are fortunate to be in a good financial position and as of now, we don’t intend to do any layoffs.

The cost bases across the board are being reviewed and we are taking various measures to mitigate the impact of lockdown. We have put on hold most of our hiring and major Capex spends as we are reworking our business plan,” he added.

Recently, Adda247 was in headlines for laying off 150 employees, but Anil Nagar, CEO and cofounder, Adda247 said that the company did a rightsizing exercise at the company level a month before Covid-19 came into the picture.

Droom CEO Sandeep Aggarwal confirmed the pay cuts for employees saying, “Everyone at Droom has taken a salary cut of 15%, at every level throughout the company, with effect from April 1.”

While Koovs declined to comment on the layoffs and pay cuts; Curefit and Swiggy denied any such layoffs of pay cuts. Curefit representative told us that except for founders taking a 100% cut, no salary cuts have been announced.

Further, Swiggy strongly denied any reports of salary cuts during the Covid-19 lockdown. “Some of these include early payouts of salaries for the month of March and 100% of variable pay to assist employees during the lockdown,” the spokesperson told Inc42.

Home design startup Livspace’s founder and CEO Anuj Srivastava said that as of now, there have been no COVID-related layoffs or salary reductions at Livspace. However, cofounders, Anuj Srivastava and Ramakant Sharma will forego 70% of their entire year’s salary.

At the same time, the leadership team has foregone 100% of their variable salary for the year. The company claimed that hundreds of employees have voluntarily contributed 25% of their March salary.

Whatever happens in a few months, Covid-19 has upended reality for every company and while many have had to make cuts, the job market is also dynamically changing. Since work from home is a norm, new hiring might be challenging, but at the same time, the turnaround time for recruitment might actually fall in cases where businesses are sorely lacking manpower in the time of high demand, such as in logistics or in hyperlocal services or even drone startups.

However, considering that it is important for businesses to first survive to even offer the possibility of employment, layoffs can be seen as a necessary move, a tough step but one that’s imperative for survival.

After the story was published, Livspace clarified that employee contribution of 25% is going towards the internal fund to ensure sustained income and livelihood for its installation partners who are often gig workers like—carpenters, plumbers, electricians, masons and more who have worked tirelessly to deliver home interiors for our customers.

“Due to the ongoing pandemic, installations have come to a standstill and these workers are the ones that are susceptible to suffer the most. As a company and as co-workers, it is our responsibility to step up and help our partners and their families,” the company said. The story has been updated accordingly.