As Per The Report By RedSeer Consulting, The Indian Hyperlocal Segment Has The Highest Consumer Satisfaction 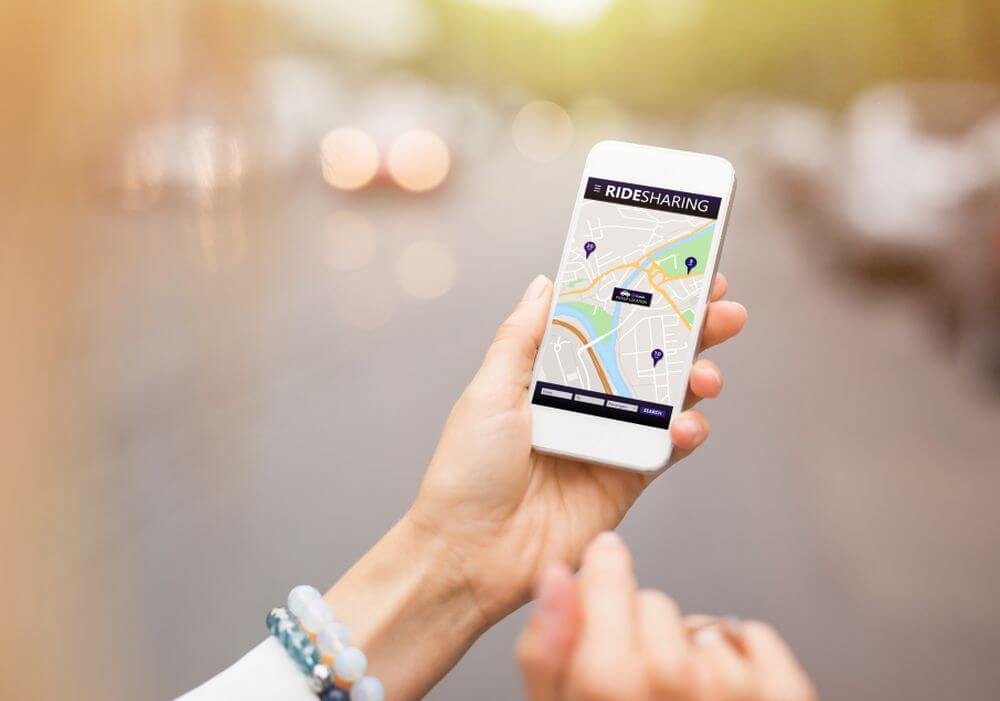 The Indian online mobility market, which encompasses cab aggregator and auto hailing segments, saw a substantial growth last year. As per a recent report by RedSeer Consulting, the two categories contributed over 15% of the industry’s overall gross book value (GBV) in 2017.

With Uber gearing up to relaunch its auto service, UberAuto, in Bengaluru followed by Pune, the country’s online auto booking market is slated to witness higher growth in 2018, the report predicted. 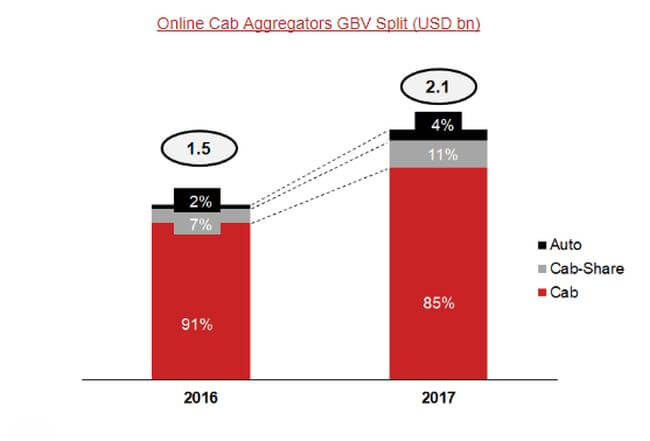 The estimations come at a time when homegrown cab aggregator Ola is looking to set up operations in Australia and New Zealand. The move is aimed at accelerating growth, while also furthering investor Didi Chuxing’s plans to capture the globe ride-hailing market.

In line with its expansion goals, Ola has already set up teams in Dhaka, Bangladesh and Colombo, Sri Lanka. The Bengaluru-headquartered unicorn is also eyeing to become profitable by FY 2019.

As per a valuation report filed with the ministry of corporate affairs compiled by chartered accountancy firm Jain Ambavat and Associates, cab aggregator Ola is projected to become profitable during 2018-19 and report a net operating profit of over $180.7 Mn (INR 1,170 Cr), which is further expected to grow further to $992 Mn (INR 6,423.33 Cr) by FY 2020-21.

Earlier in December 2017, Ola introduced a new mode of transportation for its users — Ola Pedal. As the name suggests, Ola Pedal is a bicycle sharing service and will come in handy for short journeys allowing users to complete the final leg of their journey within the large college and office campuses.

Most recently, it forayed into the Indian food delivery space after acquiring Foodpanda India from Germany-based Delivery Hero Group for $31.7 Mn (INR 202 Cr). As per its filings with the Ministry of Corporate Affairs, Ola parent ANI Technologies issued preference shares worth $4.4 Mn (INR 28 Cr) last month to Pisces eServices, the Indian company that operates Foodpanda.

Global cab aggregator Uber, on the other hand, recently sold 15% of its stake to SoftBank for an estimated $7 Bn at a $48 Bn valuation (a 68.5% drop from earlier $70 Bn). The company recently stated that it was 100% committed to India, dismissing reports of its speculated exit from the Indian market as “baseless speculation”. 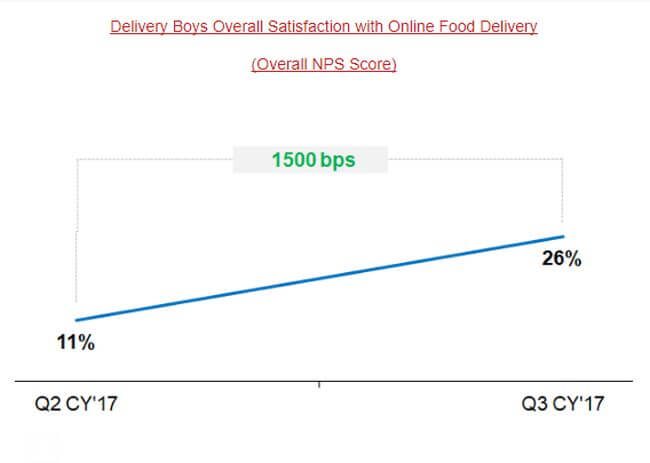 Another sector that received a massive boost last year was online restaurant search and food delivery. According to the RedSeer consulting report, the third quarter of 2017 saw consumers more willing to pay extra fees for deliveries.

The report stated, “The food-tech players passed on these additional benefits to the delivery boys thus making it a win-win situation for the industry. The delivery boys received better incentives for the higher effort put thus increasing their satisfaction levels.”

The country’s food delivery space has been abuzz with activities over the last 12 months. On the one hand, Bengaluru-based startup Swiggy has initiated discussions with Chinese investment conglomerate Tencent and existing investor Naspers for a potential $150 Mn-$200 Mn investment.

If the deal goes through, it would raise the online food delivery platform’s post-money valuation to $600 Mn-$650 Mn, sources revealed. Swiggy was last valued at $400 Mn when it raised $80 Mn in Series E funding from South African Internet giant Naspers, SAIF Partners and others.

Prior to this, Swiggy was in talks with Masayoshi Son-led SoftBank for a $200 Mn-$250 Mn fundraise. At the time, it was reported that SoftBank was looking to pick up a minority stake in the food delivery startup.

Indian foodtech unicorn Zomato, on the other hand, recently received a valuation markup from Morgan Stanley to $2.5 Bn. According to the latest report by Morgan Stanley, Zomato is expected to clock up to $1.3 Bn in revenue, including delivery fees, in FY2018. Furthermore, the report stated that the startup will register 27% EBITDA margins this year.

The markup came at a time when the foodtech unicorn is reportedly in talks to raise up to $200 Mn from Alibaba and its payments affiliate Ant Financial. If the investment goes through, the Chinese ecommerce giant is likely to pick up a stake in the company. At the time, it was reported that the funding round would value Zomato at about $1.1 Bn.

The space has also witnessed the entry of new players like Google Aero and UberEATS in recent times. Earlier this month, it was reported that UK-based online food delivery giant Deliveroo was gearing up to set up operations in the Indian market.

With cab aggregator Ola also looking to gain a stronghold in the Indian food delivery space, post the acquisition of Foodpanda India, the sector is expected to witness intense competition among a bevy of well-funded rivals. 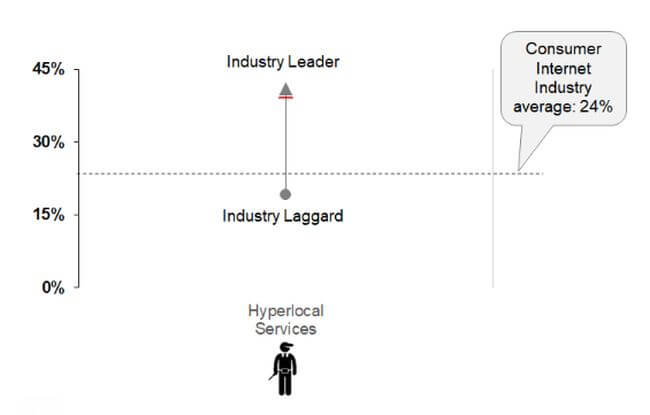 Once infamous as the graveyard of the Indian startup ecosystem with 100+ shutdowns in a single year, the hyperlocal market has witnessed an upward growth trajectory in the last two years or so. As per Inc42 Datalabs, over 400 startups entered the hyperlocal market from 2011 to 2016. Out of these, about 193 were funded and raised more than $1 Bn funding in total.

According to the newly-released report by RedSeer Consulting, the country’s hyperlocal market currently has the highest consumer satisfaction in all of the consumer Internet industry, indicating that the consumers are finding good value in the services.

“On the partner side as well we have seen high satisfaction indicating an overall good sentiment and high growth potential for the industry,” the RedSeer report further stated.

While the satisfaction of Indian consumers has been on a rise with improved browsing and shopping experiences, the festive July-August-September (JAS) quarter of 2017 saw etailers doubling down to augment the customers’ post-delivery experience.

The report added, “This suggests that the system is less capable to handle the festive volumes and needs some improvement with the expected volume growth of etailing industry.”

As per an earlier RedSeer Consulting report, the country’s ecommerce sector saw highest ever sale performance over the five festive days from September 20-24, 2017.

Further, the chart highlighted that Flipkart had a clear lead in the total sales in the 2017 period (even higher than 2016), with its very high consumer brand recall playing a key role in driving the sales.

Amazon, on the other hand, saw a 2.5x growth in smartphones, while large appliances saw 4x growth over last Diwali led by brands like Samsung, Apple, Bosch and BPL. Amazon also claimed to acquire 85% of the new customers from tier II and tier III cities.

With increased penetration of smartphones and the Internet, the market for online goods and services has increased dramatically in India in recent times. According to one report, given the current growth trends, the country’s etailing segment is estimated to touch $56 Bn by 2023.

The Indian consumer Internet industry is poised to become a $125 Bn behemoth by 2020. All the segments mentioned in the RedSeer Consulting report, including hyperlocal services, food delivery, etailing and cab aggregator, are banking on the increased penetration of digital technologies to reach consumers across tier II and tier III areas of the country.