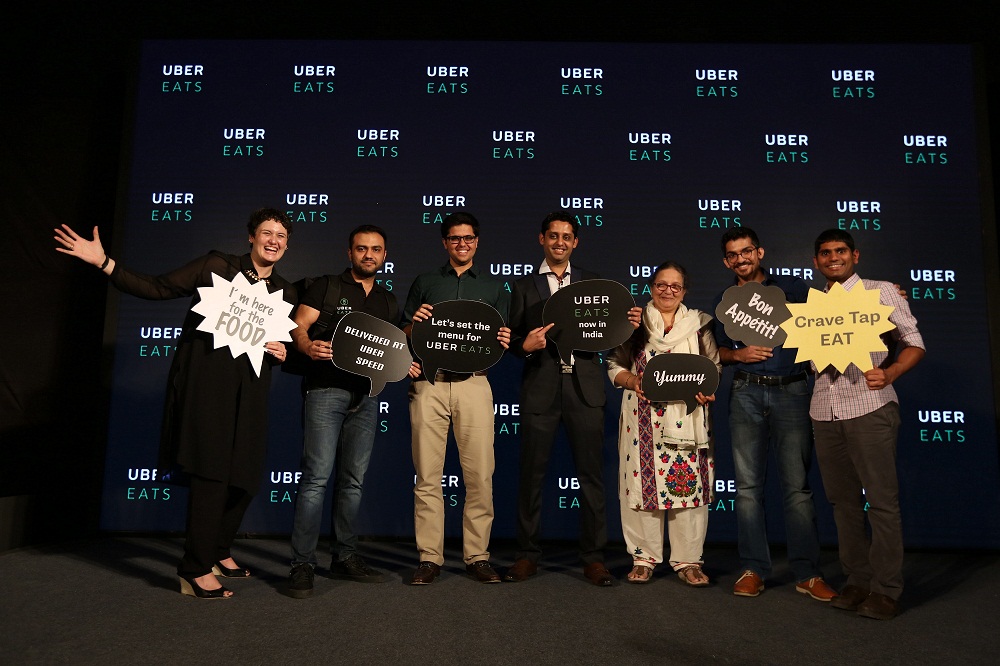 “Mumbai is a city with an appetite,” stated Bhavik Rathod (formerly GM, South & West, Uber rides), the new Head of UberEATS, India which launched formally in Mumbai today. Uber’s on-demand food delivery app UberEATS may have arrived late to the Indian on-demand food party, but it has arrived in style.

The food on demand app, which has been kept separate from the ride-hailing app claims to have partnered with 200 restaurants to help bring food to consumers in a convenient and reliable manner anytime, anywhere. It allows consumers to schedule orders, smartly curate restaurants, personalise taste preferences and dietary restrictions, and track the delivery on the app. Bhavik claimed that, worldwide, UberEATS has a delivery time of 35 minutes, out of which 20 minutes are taken to prepare the food at the restaurant. 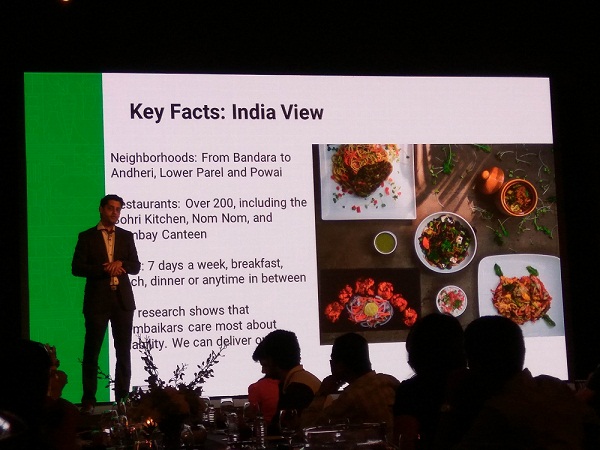 The partner restaurants include names such as The Bohri Kitchen, Chaayos, and The Good Wife. For payment, UberEATS has partnered with Paytm. There will be a delivery fee of INR 15, inclusive of taxes on the orders,but it would not entail any minimum order size. The services will be expanded further to cities such as Bengaluru, Hyderabad, Pune, Chennai and Gurugram, among others. To make all this possible, Bhavik Rathod has been appointed to lead UberEATS in India to spearhead expansion across the country.

Banking On Machine Learning To Satisfy Your Taste Buds

On downloading the app, users can input the address where they want their orders to be delivered, browse local restaurants, or search by cuisine type. They can sort according to price, dietary needs, place an order ASAP or schedule it according to a convenient time. Furthermore, they can get updates as the order is prepared  and watch in real-time as the meal gets delivered.

Throwing more light on the technology, Kartik Murthy, Product Manager, UberEATS Internationationalisation & Growth revealed that the app relies on machine learning to surface recommendations and enables creation of individualised taste preferences and customised restaurants and dishes for each user – based on their past orders and current contextual information. 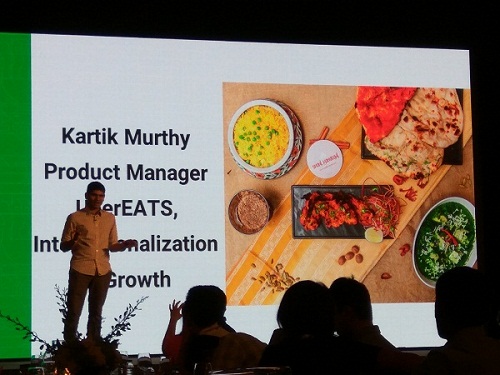 As per Reddy, UberEATS has been building out the technology to make food delivery at the push of a button easy wherever you are – whether it is at home or the park, in Mumbai or San Francisco. So the team is working specifically to make the challenges in India into opportunities for developing a better product for consumers, restaurants, and delivery partners.

“For example, for consumers, we are using machine learning to surface restaurant recommendations, as well as integrating popular payment options to make transactions easy. For restaurants, we developed a tool – Restaurant Manager – to share actionable data and analytics to help grow their businesses. And for delivery partners, we have built the ability for them to complete trips even when offline in low-connectivity areas,” he stated.

There are three parts to the UberEATS app. For consumers, the app provides the convenience of scheduling their meals ahead of time, as well as getting it delivered with ease and convenience no matter where they are by choosing a specific delivery location. Some of the places getting added to UberEATS delivery are hospitals, parks, and office buildings. 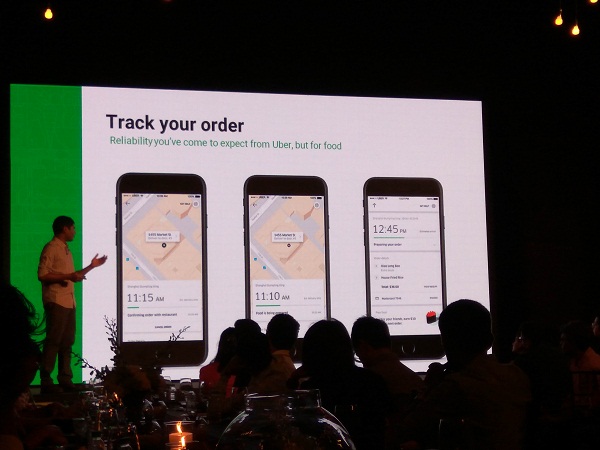 Lastly, the delivery part of the app entails a built-in, step-by-step, pick-up instruction functionality, wherein it gathers granular pick-up information for even the most difficult-to-navigate restaurants, share that with delivery partners so they can quickly locate the order and deliver on time. The delivery partners can also see images of the drop locations without slowing down their network.

UberEATS And The Indian Market

By launching in Mumbai, UberEATS, which was started in 2014 as a small delivery pilot in Los Angeles, has made it clear how invested it is in the India growth story. The food app was launched as a separate application in Toronto in December 2015 and has now grown to 26 countries, in 78 cities around the globe.  It entered Asia through a launch in Singapore  in March last year, and across the region it is also available in Tokyo, Japan, Bangkok, and Thailand.

In India, this late-stage entry will face tough competition from strong contenders like Zomato, Swiggy, and Foodpanda. Recently, Google also entered the fray with its new service Areo, which will deliver food and home services for residents in Bengaluru and Mumbai.

However Bhavik remains unfazed. He stated, “Uber has completed four years in India and we have grown to 30 cities through our brand’s business. We have understood the logistics challenge in India through our experience.”

And it is this experience it is banking on to garner a share of the Indian foodtech pie, despite being a late entrant. UberEATS is also counting on the huge appetite of a growing Indian digital population, which is expected to reach 450 Mn-465 Mn by June 2017, as per a report by the Internet and Mobile Association of India. 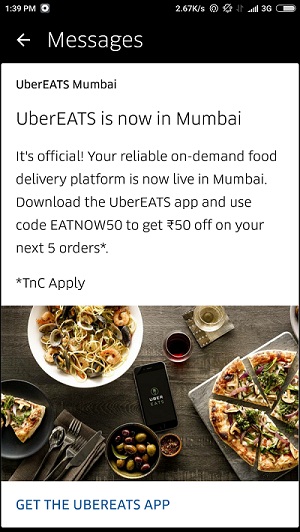 Adds Bhavik, “It’s a $15 Bn unorganised food industry and there’s a lot of appetite for food.  We have been four years in the market and have lots of learnings.”

Although its arch nemesis Ola also tried to cash on the multi-billion dollar industry with Ola Café but shut last year citing, “As we strengthen our focus on building mobility for a billion people, we are drawing these two experiments (Ola Store and Ola Café) to a close and taking learnings from these to serve you better in the time to come.”

Meanwhile Zomato, a very strong competitor, has been aggressively working to reach the threshold level needed to monetise each of its operations and recently disclosed that its revenues in 2016-17 rose 80% on a yearly basis, reaching $49 Mn, on account of growth in advertisements and the food delivery business. While it witnessed an 81% drop in the annual operating burn for FY17 ending at $12 Mn, compared to the $64 Mn in FY16.

It must be kept in mind that Uber is deep pocketed enough to take on any rivals head on, but how much of an appetite it can whip up in the crowded and difficult Indian foodtech space will make a for a nice byte.