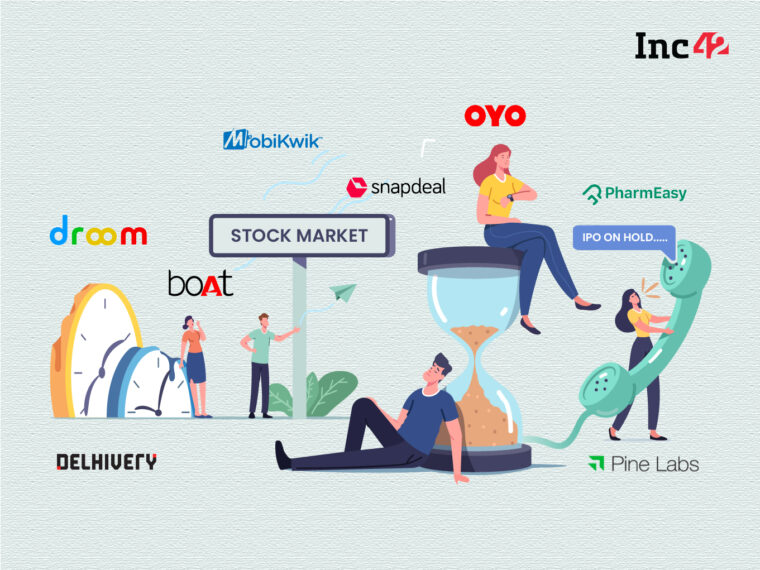 Unlike 2021, there has hardly been any major listing of tech startups on the stock exchanges in the first four months of 2022

The roadmap for upcoming IPOs is unclear due to market volatility, tightening of monetary policies globally and persistent fear of the next wave of COVID

After the recent decline in shares of 11 listed startups, many of the IPO-bound startups are waiting for the market sentiment to improve or are mulling reducing the offer size

The year 2021 saw 11 Indian startups list on the bourses and get into the big league.  Overall, Indian startups raised more than $2.7 Bn through mega anchor investments and pre-IPO rounds and $7.3 Bn through IPOs in 2021. However, there have been no major listings of startups in 2022 till now.

Most of the listed startups have failed to deliver returns after their listing on stock exchanges, and have seen sharp decline in their share prices. The likes of Paytm and Zomato have been reduced to a third of their peak valuations. While some of them have rallied to reach closer to their pre-IPO valuations, overall, it has not been a good outing for the Indian startups on the stock exchanges.

The geopolitical tensions due to the ongoing Russia-Ukraine war and the tightening of monetary policies by central banks across the world, including the US Federal Reserve, have turned the global market sentiment negative. In a surprise announcement last week, the Reserve Bank of India (RBI) hiked the repo rate by 40 basis points and increased the cash reserve ratio by 50 basis points to 4.5%. All these have caused further troubles for the listed new-age tech startups in the country. The market volatility, global slump in equities and the fear of the next wave of the Covid-19 pandemic have also made the roadmap for upcoming IPOs unclear. As a result, many of the IPO-bound startups have either decided to ride out the storm or reduce their offer size. Most recently, Delhivery, whose IPO goes live on May 11, reduced its offer from INR 7,640 Cr to INR 5,230 Cr. The logistics startup’s decision to cut the offer size is unlikely to be a one-off and may be followed by others if the market sentiment doesn’t improve.

Startups With IPO Plans Waiting For The Storm To Pass

As the euphoria of startup IPOs died down after flaky stock performance of the 11 listed startups, many of the startups which intended to come out with IPO have put their plans on hold. ‘Don’t want to mislead investors’, ‘waiting for the right time’ and ‘no point in taking retail investors through a bumpy ride’ are some of the reasons being cited by them for deferring their public issues. 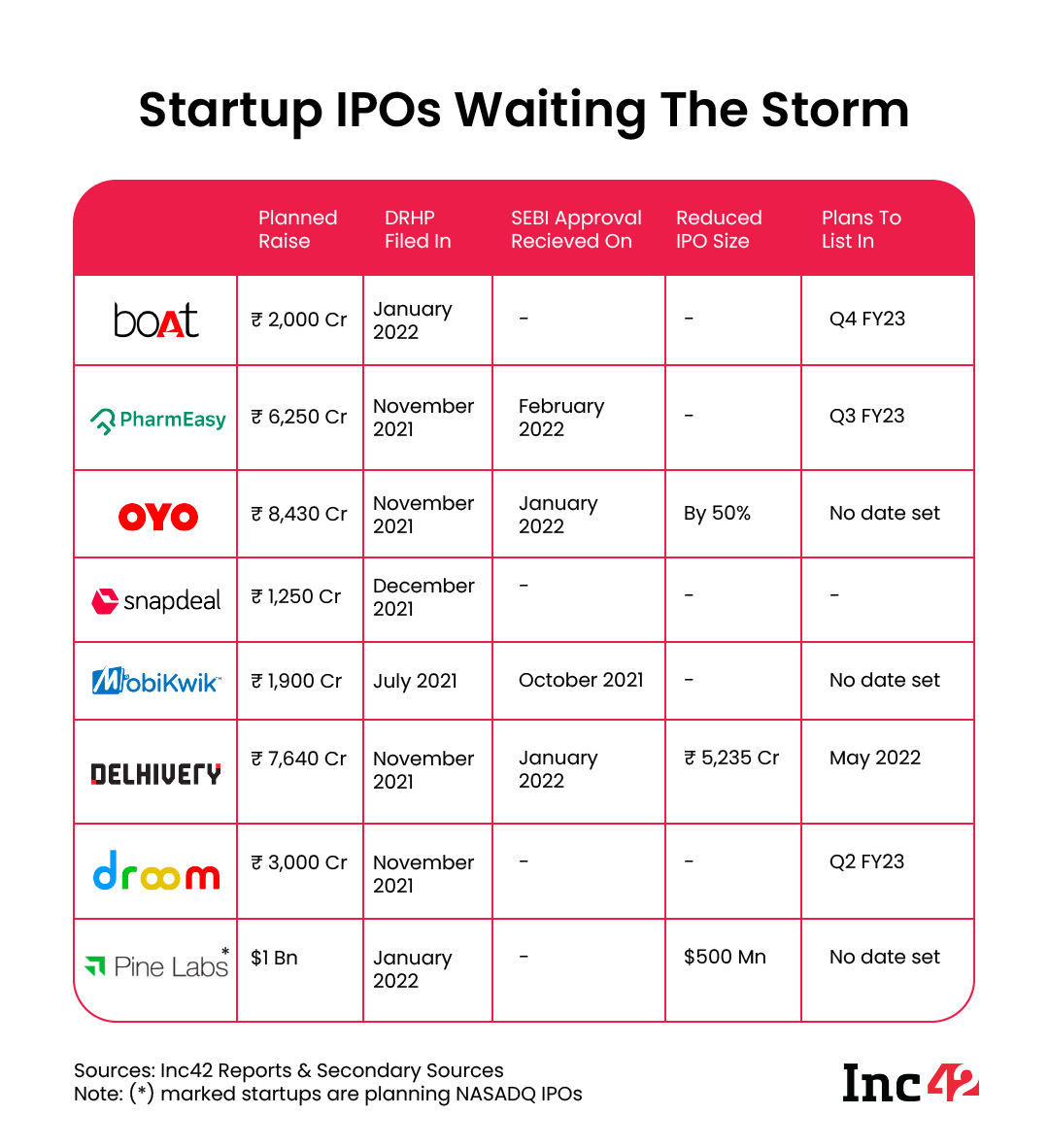 For instance, New Delhi-based headphone maker boAt’s parent company Imagine Marketing Limited filed for an INR 2,000 Cr IPO with SEBI and is yet to receive a go-ahead from the market regulator. Yet, despite filing the DRHP in January 2022, the D2C startup is reportedly looking to list in the first quarter of 2023, almost after a year.

On the other hand, Pharmeasy and MobiKwik also filed their DRHPs with SEBI last year and have received the final clearance. Despite that, the startups have not set a date for the public issue till now, which is likely to delay their IPOs. Hospitality unicorn OYO too has received in-principal approval from SEBI for its INR 8,430 Cr IPO. The startup will need to file an updated DRHP, but is reportedly mulling slashing the offer by 50%, and has set no date to go public.

Ecommerce startup Snapdeal and automobile marketplace Droom, too, filed their respective DRHPs last year and are yet to receive SEBI’s approval. However, neither of the startups is planning to list anytime before Q2 FY23. Fintech giant Pine Labs, which is planning a NASDAQ IPO, has reduced its IPO size from the planned $1 Bn to $500 Mn and filed a draft confidentially with the US SEC.

“The startups have been used to a starkly different fundraising environment as compared to an IPO – and typically every subsequent round is placed at a higher valuation,” a market expert told Inc42.

“Normally IPOs take about 12 months of planning and execution and by the time it’s ready for IPO, the market dynamics change and it’s difficult to time it. So at that point, the choice is between lower valuation and a smaller issue against a probability of the IPO failing – so naturally, they choose the former,” the expert added.

Normally, SEBI takes around 4 to 6 weeks to approve a DRHP when the draft requires no major changes. After getting the regulator’s approval, it takes another 4 to 6 weeks to bring the IPO to the market, including the filing and receiving approval for RHP.

While normally companies may be looking at an average timeline of 3-4 months, the above-mentioned startups have easily gone beyond 6 months since they documented their plans for a public listing.

About 16 startups are expected to hit the public markets in FY23, of which seven have already filed their DRHP. However, the performance of new-age technology companies in the stock market has been a topic of heated debate of late.

Critics call the listing of these startups a bubble which is likely to burst sooner or later. The promoters and founders of these startups have received the maximum criticism, with questions also being asked about the rush to list the loss-making startups, inflated valuations and dumping of their stake on retail investors to earn a fortune.

With a steep decline in shares of some of these new-age tech startups, retail investors have lost a large amount of wealth. There have also been demands for stricter regulatory and disclosure norms as startups are very different from matured businesses from the traditional metrics point of view.

SEBI is now mulling a new disclosure framework wherein the market regulator may ask tech startups to share details about their valuations, based on the issuance of new shares and also details about key performance indicators (KPIs).

Previously, SEBI also extended the lock-in period for 50% of the anchor investment portion to 90 days from 30 days so that institutional investors have more skin in the game. It also set out limits on the usage of funds and said that besides banks, the credit rating agencies would also monitor the utilisation of funds.

Naturally, after the unicorn and decacorn achievements, startups were bound to be in an IPO frenzy. The question is will the realisation of startups that it wouldn’t be easier to get lofty valuations while listing and the steps taken by the market regulator slow down or bring the startup IPO bandwagon to a temporary halt.