While Paytm has been on a downslide since its listing, Zomato recorded a historic low at INR 91, 27% down from its listing price

Amid increased interest rates and sell-offs, the tolerance of the market has come down, according to equity markets experts

After witnessing a record number of tech companies’ IPOs last year, the Indian startup ecosystem is currently in the midst of a bear season. The valuations of leading tech companies have been cut to size by the stock markets with most of the newly listed startups — Nykaa, Zomato, Paytm, Policybazaar, Fino and others — trading far below their listing prices.

These correction measures are in sync with the US tech industry, where stocks of major tech companies including Apple, Microsoft, Tesla, Facebook, Netflix, Twitter and Amazon have seen sharp falls over the past week or so.

But unlike the US market, Indian public tech companies are not under a huge sell-off pressure, and indeed there’s more to the Indian story, believe experts. For instance, Zomato has been trading at around 27% lower than its listed price, while Paytm has been continuously on the downslide. In its short life on the stock market, the Paytm stock has gone from bad to worse — it is currently trading at around INR 900, almost 50% down from its listing price. 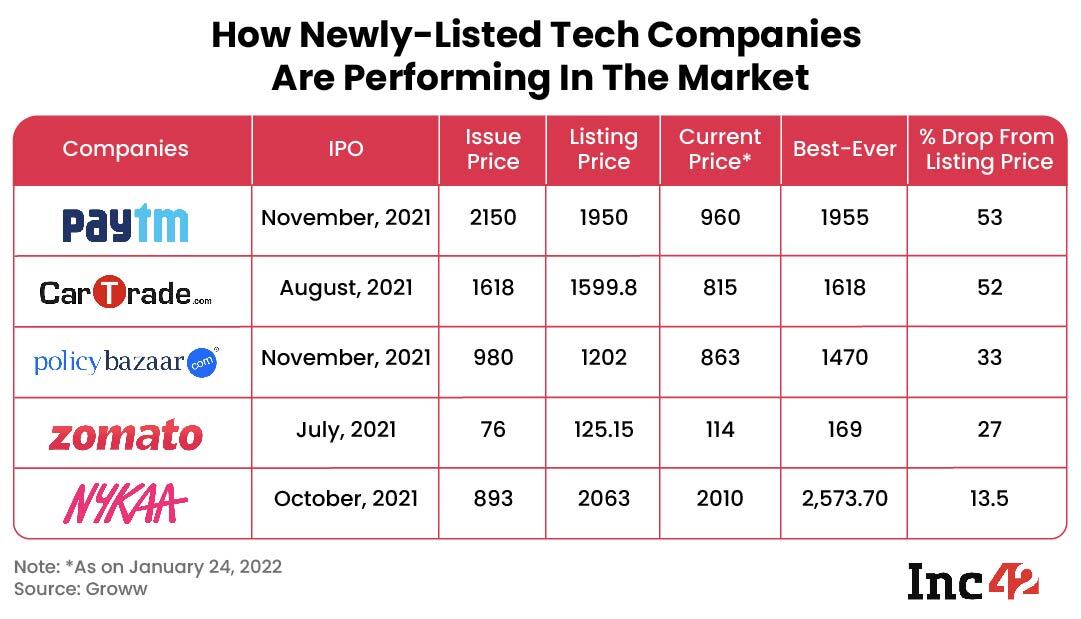 The feedback from the market will now also force new investors to rethink their tech portfolio, and more importantly, startup founders will have to calibrate their valuations for future fundraises and public listings.

Like SoftBank Vision Fund CEO Rajeev Misra said last week, “If the public markets stay where they are, then the private markets, which are overvalued, have to rebalance. And we’re seeing that already.”

So, what are the key takeaways for startup founders and promoters from the latest downturn?

Paytm’s founder and CEO Vijay Shekhar Sharma had earlier claimed that the company’s business model has not been well understood by the investors. “It’s a new business model and it takes a lot for someone to understand it,” said Sharma.

But founders cannot simply wash their hands off this responsibility.

Speaking to Inc42, Aarin Capital cofounder and partner TV Mohandas Pai said “Many people don’t understand the business model. Then this is not people’s fault. The problem is with the founders who have not been able to explain their business.”

He added that when one goes and sells something, the seller should be able to convince the buyer. It is their job. The founders and promoters will have to do a lot of work that they are not doing currently.

“One tech entrepreneur is on record saying that he would meet analysts only once a year. Now there are more than 400 unicorns in the global stock markets. Why should people invest in that particular company, instead of buying something else they understand? So they [founders/promoters] must go and market their business model which they are not doing. They’re not meeting people, so the interest is going down,” Pai added.

Most tech companies that listed in 2021 have been preparing for the IPO for the last four-five years. However, instead of working on hyping up the IPO, it’s high time that these companies start looking at building a business model that could be easier to decipher, believe market experts.

Recently, Kotak Mahindra Bank executive vice-chairman and MD Uday Kotak said that it should be the responsibility of startups to make sure investors have the opportunity for sustained growth, instead of only listing day gains.

Here, it must be noted that overpricing a share is usually considered a temporary measure, as IPOs and the issue price are tightly controlled. Of course, that control is lost as soon as the stock is listed.

Srikanth Meenakshi, founding partner of market investment research and analysis platform PrimeInvestor, stated that IPOs primary point is to get capital from the market at the time of listing. And in that sense most of these tech companies successfully bagged the money from the IPO that they wanted to. But subsequently, they have little to no control over the share price in the market, particularly since they also lack profitability.

“Their valuations including Nykaa, Policybazaar and Paytm were at a higher price. And I wouldn’t call these valuations justified, but smart for an IPO,” Meenakshi added.

However, as Kotak pointed out, a lot of investors are looking at notional losses in their portfolio. And it is very difficult for those notional losses to be recouped in the near term. This is especially true for Paytm stock, which has to grow by more than 2x to help IPO investors break even. And that’s unlikely to happen in the short to medium term.

One of the immediate correlations that one may draw from the recent decline is that the tolerance level of the market has come down significantly, said Meenakshi. This could also be attributed to multiple factors such as rising interest rates, and as a consequence, driving FIIs away from the market.

“What is happening right now from a qualitative and from a fundamental point of view is that the market that was earlier willing to tolerate the high valuations is no longer able to do the same in the short and medium-term, due to certain extraneous factors that are happening in terms of the tightening of liquidity, such as the higher interest rates etc,” he added.

Will The Union Budget Push Liquidity?

In February of 2018, when the market was at a peak, the budget came and imposed capital gains tax on equities. It impacted the market adversely, said Meenakshi. “Then came Covid, and all we witnessed was a prolonged downturn.”

On whether the upcoming Union Budget 2022-23 could offer the right push to the market, Meenakshi stated that it might only offer some marginal gains. “I don’t think that investors have much to expect from the budget, in terms of helping them out. There is definitely not going to be any reduction of securities transaction tax or taxation rates on capital gains on equities or anything like that,” Meenakshi said.

Going forward, at the end of the day, it’s the revenue and profits that matters. These are the metrics that matter and ones that investors easily understand. Lacking these fundamentals, no amount of explanations or market acceptability will help tech stocks claw back value.