Retail investors who had placed long-term bets on new-age tech companies such as Paytm, Zomato, Cartrade and others have seen losses

The performance of new-age technology companies in the stock market has been a topic of heated debate of late. After tech stocks tanked on bourses in tune with the wider market trend, Paytm, Cartrade, Policybazaar, Fino Payments, Zomato have all come in for harsh criticism from investors.

Earlier, a few market pundits had termed the highly-trumpeted initial public offerings (IPO) of new-age tech companies as a big bubble. The biggest criticism was that promoters and founders were rushing their loss-making entities to the market and dumping their holdings on public shareholders to earn a fortune.

Retail investors who had placed high bets on new-age tech companies are now left regretting their decision as many of them are trading below their issue price. In the wake of losses, the high valuation of startups for private placement at pre-IPO and IPO stage, and the issue pricing were subjected to close scrutiny.

Concerns were also raised for stricter regulatory and disclosure norms because startups were a different cup of tea for retail investors compared to mature businesses from the traditional metrics point of view.

Recognising these developments, the Securities and Exchange Board of India (SEBI) is now reviewing the disclosure norms with regard to issue price in share sale of new-age tech companies. In a consultation paper, the regulator has sought public comments on ‘Disclosures for ‘Basis of Issue Price’ as it looks to re-examine the pricing issue. Thus disclosure norms assume extra significance because quite a few new-age technology companies are waiting in the wings to tap the capital market. 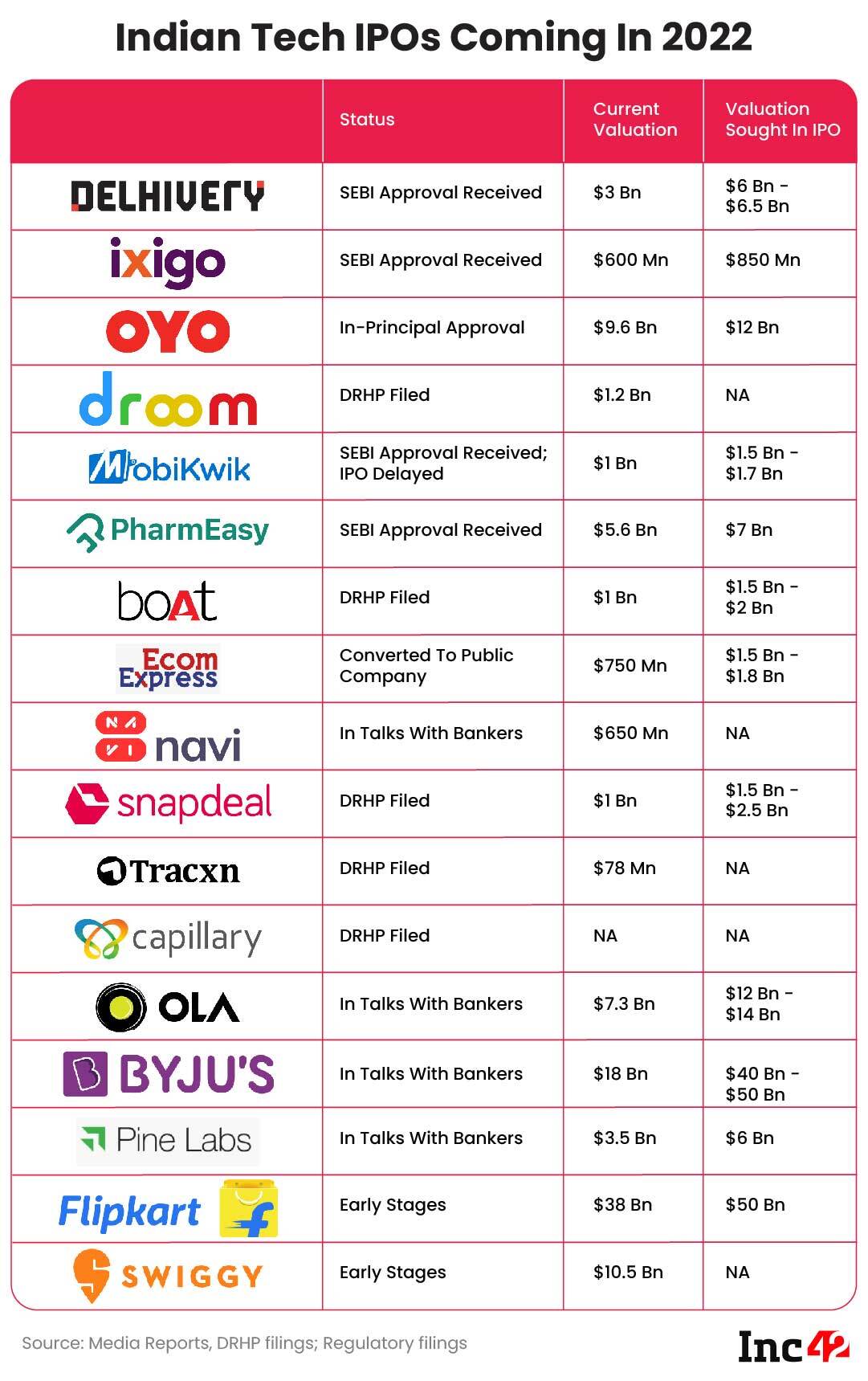 According to the extant regulations, a company wishing to raise funds from the market through an initial share sale needs to disclose critical financial performance measures such as earnings per share (EPS), price to earnings (P/E), return on net worth (RoNW) and net asset value (NAV) of the company, including the comparison of such indicators with its peers.

These regulations under ICDR Regulations, para 9(K) of Schedule VI, are essentially for profit-making companies. New-age tech companies, however, file under 6(2) of Issue of Capital and Disclosure Requirements (ICDR) regulations. This provision has been incorporated keeping in mind that startups typically do not have operating profits in the three years preceding the IPO.

Disclosures in ‘Basis of Issue Price’ particularly for a loss-making company are required to be supplemented with non-traditional parameters like key performance indicators (KPIs) and disclosure of certain additional parameters such as valuation based on past transactions or fundraising by the issuer company.

It is indisputable that investors should have access to all the relevant information so that there is no information asymmetry between the entity going public and the investors. Against this background, the recommendations of SEBI’s Primary Market Advisory Committee (PMAC) on detailed disclosure regarding KPIs of the issuing company are being broadly welcomed.

“What is needed is more disclosures around sales, cost and cash-flow drivers. Therefore, the thought process behind the disclosure of KPIs looks very logical,” said Mohit Ralhan, managing partner at TIW Capital Group, which has invested in apparel brand Chromozome.

Since the fortunes of new-age tech companies change faster due to their constant effort to scale up, the disclosures should be on a quarterly basis for the previous 12 quarters, up till the most recent quarter before the listing date, Ralhan added.

Investors And The Question Of Startup KPIs

The SEBI committee has recommended that the draft red herring prospectuses explain how key performance indicators or KPIs contribute to form the basis for issue price. It also seeks disclosure of all material KPIs that have been shared with the pre-IPO investors at any point of time during the three years prior to the potential listing. These are expected to help investors judge whether the valuation is justified or not.

“After this move, merchant bankers will be vigilant,” noted Rahul Sharma, co-owner of investment advisory Equity99.

Most startups are not profit-making entities and, therefore, retail investors often struggle to get a true picture of the financial viability of the targeted company. They are also in the dark about the future prospects since there is not much public disclosure. The financial track record of startups is, however, available for investors to make their assessment. For startups that went public in 2021, investors knew that a majority of them were loss-making entities.

According to Sharma, however, since the financial track record is not a truly viable option, KPIs would help to arrive at the investment decision in the case of startups.

Ralhan added that revenue KPIs should be such that investors get a very good idea of how price and volumes have moved over the previous 12 quarters.

“Also, the business reasons for variations must be explained. A similar explanation should be made available for gross margin and top 4-5 cost heads, which constitute at least 80% of total cost. There should also be cash flow related KPIs including cash collections, expenses and all other cash outflows,” said TIW’s Ralhan.

Another recommendation is the comparison of KPIs with that of Indian listed peer companies and/or global listed peer companies. It is to be seen how startups respond to this suggestion. For instance, If Swiggy decides to go public, it would be interesting to see a comparison of its KPIs with that of rival Zomato. Investors will need to be extra judicious in case Ola Electric decides to tap the primary market and its KPIs are juxtaposed with Tesla’s rather than say Indian auto rivals.

Ralhan opined that we need a valuation KPI that details every share issuance, including ESOPs and issuance of shares to management along with relevant valuation metrics such as price-to-sales ratio or EV/EBITDA of all such share issuances on pre-money basis.

For investors to continue being invested in a particular startup’s stock, they would also need a regular and transparent flow of information on the KPIs post-listing. Given the stiff competition in the tech market, startups may not be forthcoming with such information.

One anomaly observed in the recent startup IPO listing is the higher public offer valuation compared to valuation at which private placement of shares in the pre-IPO stage. According to Equity99’s Sharma, this was witnessed in nearly all recent IPO listings. To correct this anomaly, the best action would be to increase the period before IPO wherein shares cannot be allotted at price lower than the IPO price.

It goes without saying that investors have the right to know all past valuations at which the shares have been issued since the inception of the company. Going by the recent examples, the jump in valuation at the time of IPO has remained unexplained to investors. At the same time, it is also the right of the company to offer a price which investors may accept or reject.

As investors have suffered huge losses with some of the new-age tech scrips slumping (Paytm, Cartrade, Zomato are big examples), a rather conservative view is that startups should be allowed to tap the capital market on their businesses attaining maturity only. The idea has found some takers as it is seen as a measure to protect retail investors. This will, however, deny good and viable startups the advantage of listing.

Creating a comprehensive framework based on disclosures and explanations is the more mature response. Investors can decide for themselves and the idea should be to make available as much information as possible.

Startup IPOs Are Still Evolving And So Are Disclosure Norms

In the US, there was a big craze for tech companies going public. The likes of Amazon and Facebook were loss-making startups when they listed. But the fixation with such stocks was not without logic, as investors saw that new-age tech companies grew more profitable faster than traditional companies.

In India, investors naturally assumed they could ape their US counterparts. But no two markets are the same. Startups in India vastly vary in their tech prowess and innovation capabilities from those in the US, and their addressable bases and the purchasing power of this base also vary.

One of the big lessons that investors should derive from the recent hammering new-age tech companies have received is that judging IPO by its pre-IPO premium is not smart. Investors must understand the business models in greater detail.

Market watchers are positive that 2022 was the start of a golden phase for the startup IPO’s in India and they should be nurtured and supported. Both companies and investors will learn over time and this will continue to become more and more robust. The IPOs of new-age tech companies are relatively a new phenomenon and the degree of their disclosures will evolve in due time along with their business models.