In its bid to keep solutions to pesky calls and SMSes future-proof, scalable and cost-effective,  Telecom Regulatory Authority of India (TRAI) has come out with a new guideline asking telecom operators to deploy blockchain to ensure telemarketing messages are sent to interested mobile users from registered entities.

The development comes at a time when the telemarketer Venets Media had filed a petition against TRAI’s blockchain partner Tanla Solutions over the ‘blockchain-based anti-spam system’ in the Delhi high court, claiming to create an ‘unfair competitive advantage.’ In response to this, TRAI rejected the claims and said that the allegation was ‘unsubstantiated and holds no ground.’

TRAI said that the blockchain technology-driven solutions have been adopted to protect consumers’ data by telecom service providers under ‘TCCCPR-2018’ regulation to curb the menace of spam SMS.

In the wake of Covid-19 pandemic, Telangana, announced that it will be partnering with Tech Mahindra, to use blockchain technology in an attempt to keep track of medicines, sanitisers and masks. The move is aimed to ensure that supplies reaching people in containment zones are infection-free.

Rajesh Dhuddu, global practice leader-blockchain at Tech Mahindra said that the company is currently working with the government on different use cases. Further, he said that one of the use cases is the tagging of jute bags which are being used to provide supplies to people residing in the containment zones.

“The government is using our blockchain technology to track and trace gunny bags wherein each bag was tagged with a token which is then imprinted on the blockchain. This way, we could replicate the whole journey of the bag in the physical world to the digital world,” said Dhuddu.

How Secure Is Blockchain?

In a Deloitte’s 2020 Global Blockchain Survey, conducted by Deloitte, it was found that  64% of the participants acknowledged that blockchain technology is secure and 32% said agreed that it offers the same level of security as the existing technologies. 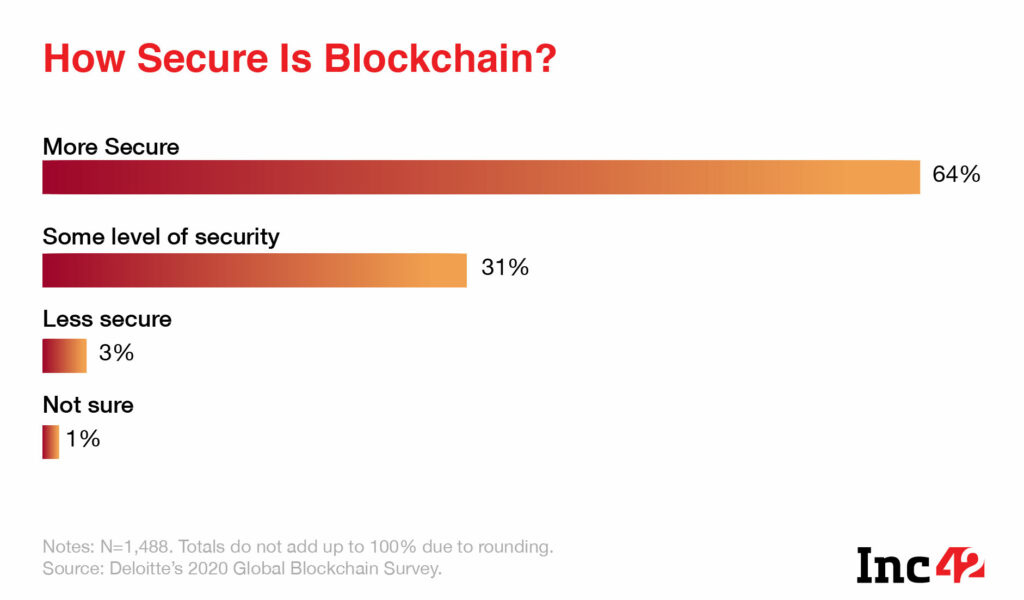 Global fintech giant PayPal recently announced that it is hiring a ‘senior blockchain research engineer,’ for its newly formed Blockchain Research Group, where it is investigating the benefits of blockchain technologies and their applicability to PayPal. The job vacancy is based at PayPal’s headquarters in San Jose, California.

In a job vacancy posted on PayPal’s website, the company revealed that it is looking for candidates in creating ‘clearly, timely and well-researched documentation that expresses a point of view or suggested course of action. In addition to this, the selected candidate would also be involved in developing proof of concepts (POCs) and pilots, pitching new ideas to senior management and others.

It has to be noted that the development comes at a time when the company has reportedly said that it will be leveraging blockchain technology to support its users to trade digital assets, alongside Venmo, mobile payment service owned by PayPal.

Belgium-based tech company IntellectEU recently announced that it has launched a blockchain tool called Catalyst Blockchain Platform to enable the creation, management and upkeep of blockchain or DLT networks and smart contracts. The company said that the platform helps companies to save time and money, by offering businesses the ability to create ten organisation networks in less than ten minutes, across the existing infrastructure.

Thomas Bogner, vice president of blockchain solutions at IntellectEU said that it was difficult to deploy, monitor and maintain blockchain networks. Even so, blockchain developers with the required domain expertise are expensive and scarce, he added. IntellectEU claimed that its platform which comes with an automated setup makes it simple, fast and inexpensive for enterprises to harness the benefits of blockchain technology.