In a bid to minimise risks in insurance space, TCS has partnered with B3i where it looks to launch a blockchain platform that offers real-time insurance products across the value chain 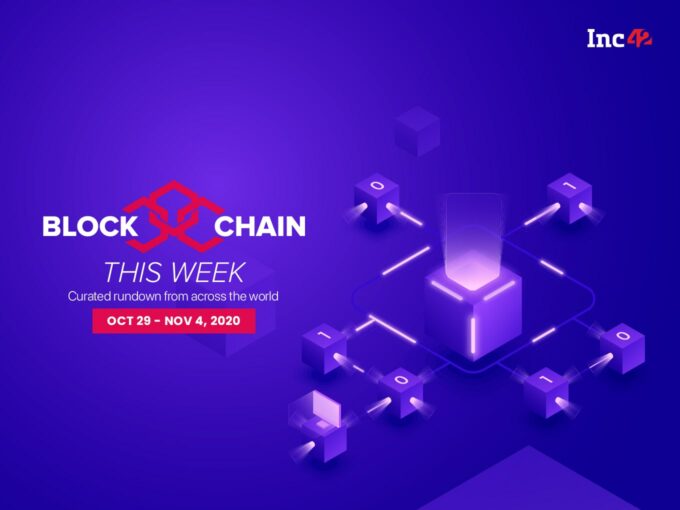 With this collaboration, the duo is looking to digitise the insurance industry for faster and more efficient delivery of tailored solutions to support risk managers, insurers, brokers and other industry stakeholders. Also, its partners and customers will now be able to leverage the B3i Fluidity platform by reusing common components and services, as well as ensuring interoperability with other applications and tools in the B3i ecosystem.

In addition to this, the platform is said to bridge the ‘protection gap’ by identifying opportunities for new or existing insurance products to facilitate ecosystems and value chains across industries, including manufacturing, distribution, logistics, retail and insurance.

The CEO of B3i John Carolin stated that their technology is expected to solve longstanding problems that insurers and brokers wouldn’t have solved individually. He added that with the help of TCS, it is now looking to establish protocols, curate minimum standards, safeguard interoperability and set a solid foundation to digitally transform the insurance industry.

Gowthaman Ragothaman, CEO of Aquilliz told ET that more than ever, brands will need to better abide by a fragmented ecosystem of privacy frameworks while still delivering ads with maximum relevance and context to customers. He added that this will enable greater standards of personalisation, keeping privacy in mind.

Gurugram-based edtech platform Yschool told Inc42 that it is working on developing a blockchain platform which offers rewards to students/users and capture data in real-time. The way it works is, these rewards can be redeemed by users for various activities such as the purchase of books, study materials etc.

Now, with its blockchain solution, this could be a game-changer for the company as it is looking to create a student profile on the blockchain which holds all the critical data about the student which is said to be tampered proof.

In terms of realistic outcomes, the company said that this data could be used to share it with other universities and applications for giving them an insight into the student’s academic performance.

Also, the company revealed that this could be used for education loans where a student’s academic health also becomes a critical component in deciding scholarships. “We are also planning to bring in a review system based on blockchain which will be an authentic directory giving true reviews about all the education-centric services,” concluded Goyal.

Globally, interest in blockchain technology has been growing exponentially. In India too, more and more startups are working towards developing solutions across the industry. Interestingly, the trend is shifting from large companies to multiple startups focusing on this sector and becoming a part of the blockchain economy.

According to the app development company Appinventiv, the below-shown graph clearly depicts the area of interest for startups across sectors. For instance, finance and insurance stand at 42.4%, followed by information and communication (36.5%), professional services (4%) and arts, entertainment and recreation (3.3%) among others. 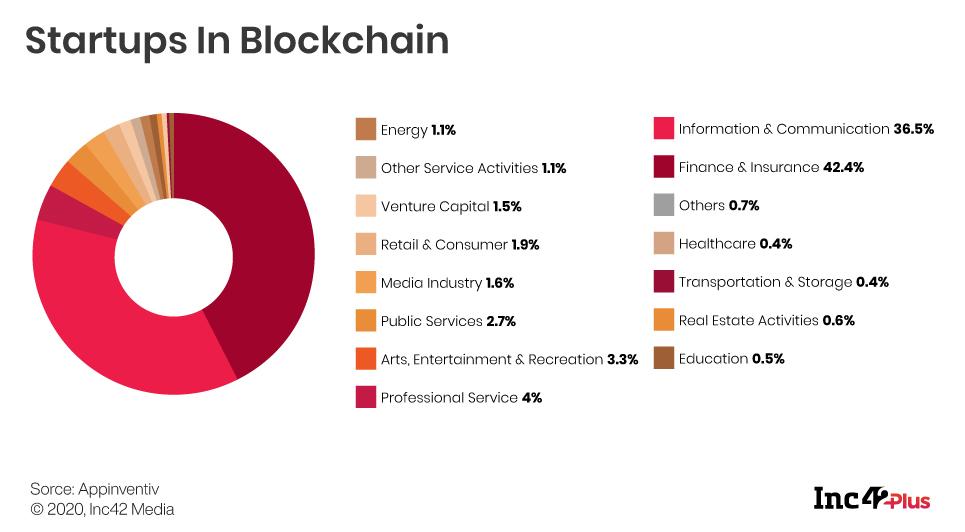 For The First Time In Blockchain History, US Presidential Election Results On Etherium & EOS Blockchains

As social media giants such as Facebook, Twitter and others are taking advanced measures to tackle false claims about the US Presidential Election 2020 results, Associated Press (AP) recently announced that the results of the elections would be available on Etherium and EOS blockchains. The AP is said to use blockchains behind the scenes in its own application programming interface (API), where anyone looking into the official AP results can verify the accuracy using the blockchain data, as reported by Forbes. Many industry experts said that these real-time results could potentially pave a way for how future elections are conducted across the world.

In a bid to bring in transparency and increase corporate accountability, the telecom giant Verizon recently announced that it has launched an open-source blockchain platform for news releases, in partnership with Huge, MadNetwork and AdLedger.  Accordingly, the news incorporated in the system is tracked on the blockchain ledger, reflecting precisely what was delivered by the releasing organisation.

At the same time, the readers can also easily go back to the original source and see what was published, verify the information and also check if the corporate announcement has been updated. In addition to this, news published on the platform is said to be secured through cryptographic principles, therefore any changes in the news can be tracked and contextualised.